How about Pro Tour Kaladesh? I imagine Wizards has to be happy that their new set made such a big splash on the big stage. Smuggler’s Copter was the big breakout card the week before, but the pros dug deep and showcased a whole host of great hits from Kaladesh. Energy in particular showed itself to be a resource worth exploiting, and that’s only with just a single set to work with. Who knows what sort of Energy cards, Vehicles, and artifact shenanigans we’ll have in Aether Revolt? I’m super-stoked!

It’s been a great set for Commander too. I’ve had a great time working on decks featuring the new legendary creatures Wizards has unleashed upon the world. So far I’ve written about:

Padeem, Consul of Innovation (Impress Me)

If you didn’t catch them before, be sure to check them out. The legendary creatures I’ve built around so far have all embodied the joyful creation of artifacts that is such a part of the flavor of Kaladesh. Today, however, I’m taking a walk on the shady side of Kaladesh. Sure, it’s got white mana in its casting cost, but that’s because you can’t have shadow if you don’t have a little light.

Say hello to my little friend. 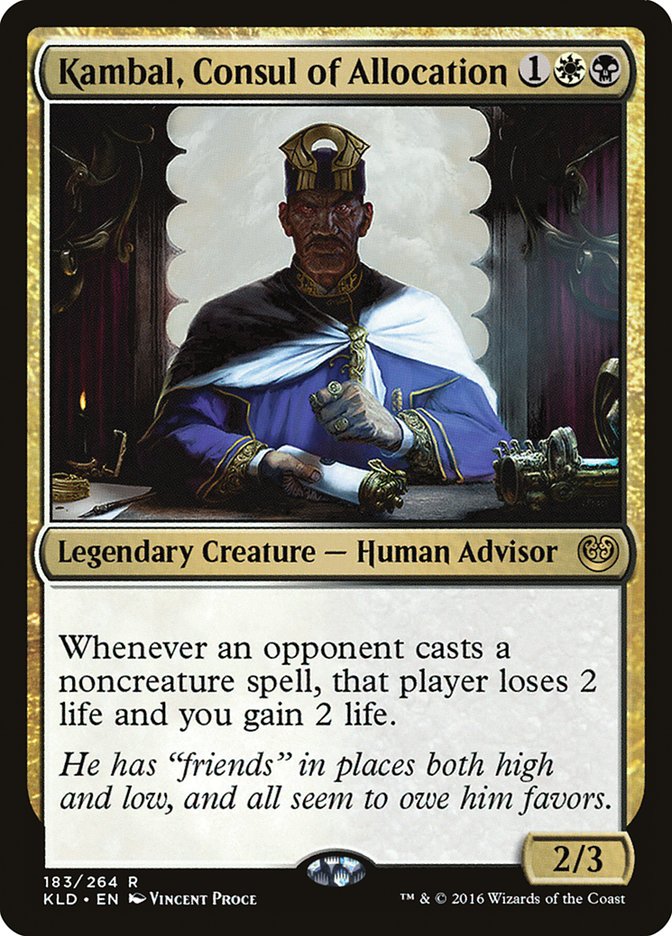 What I love about Kambal, Consul of Allocation is just how innocuous it looks at first glance. I mean, what’s a little life transfer between friends? We all start at 40 life in Commander; a little Syphon Soul here and there is not that big of deal. Kambal is even reasonable—the life tax isn’t for all spells, just the noncreature spells! Cast all those creature spells to your heart’s content, and if Big Spells at the end of the table is put under the squeeze, well, maybe they should have played more creatures!

So what happens if no one cooperates and is stingy with their noncreature spells? Well, let’s just grease the wheels!

Howling Mine, Temple Bell, and Mikokoro, Center of the Sea are crowd pleasers in Commander, and they can certainly facilitate players to cast more spells. More spells hopefully means more noncreature spells because, at the very least, people will need to cast spells to deal with the horde of creatures being put on the battlefield. More noncreature spells mean more life from Kambal, Consul of Allocation’s favors. I added Seizan, Perverter of Truth to the mix and started to roll deep with cards like Font of Mythos and Anvil of Bogardan when it occurred to me that a better way might be a healthy dose of the monarch mechanic. Not only will the monarch get to draw more cards and play more spells, but the squabbling for the title of monarch should help supplement the drip, drip, drip of life loss from Kambal triggers.

Waste Not made the cut because I’m hoping that the glut of cards could lead to some discarding. The combination with Geier Reach Sanitarium ought to be quite nice.

I added Ulamog, the Infinite Gyre because it’s possible that if all the card drawing stays on the battlefield long enough, then decking could become a real problem. Our little Eldrazi Titan friend helps give us an out to that possibility.

So if we’re already gaining a steady stream of life from Kambal, we might as well lean harder on that theme. Black and white have a lot of support there, of course. I love that we can take advantage of the life gain from Obzedat, Ghost Council and Ghost Council of Orzhova and can even do shenanigans with Whip of Erebos to cheat the exile trigger while gaining lots of life along the way. Vizkopa Guildmage can dish out a lot of damage in this deck too.

Many of the creatures in the deck are relatively small, so I like having Archangel of Thune here to potentially grow your army to impressive sizes.

Okay, so we are getting a lot of life from Kambal and all the other life-gaining cards I have added to the mix. All that extra life is good for things other than not losing, and the first thing I thought of was Aetherflux Reservoir. I think it’s a good card for Commander in general—your starting life total is four-fifths of the way towards loading a round in the chamber, and once you get to 50 life, you can threaten Mutually Assured Destruction to anyone at 50 life or less who messes with you. Kambal should help ensure that most players will have downward pressure on their life totals while also making it much more likely you will gain enough life to bring Aetherflux Reservoir online more quickly and potentially good for multiple shots.

Many of the cards here are just good quality Commander cards that get better when you have a steady stream of life to offset the cost: Phyrexian Reclamation, Westvale Abbey, Slaughter, and Erebos, God of the Dead.

Imp’s Mischief and Withering Boon are fun surprises, since black doesn’t typically have these sorts of effects available. Ayli, Eternal Pilgrim and Karlov of the Ghost Council are great Orzhov creatures that play perfectly with the themes here.

Cryptolith Fragment is an interesting card I have had my eye on for Commander and it seems a great fit here. It adds more downward pressure on everyone’s life totals, while Kambal keeps your life total padded. You may not get yourself to ten life or below very often, but if you do, its transformed state is quite useful.

At some point you can expect your opponents to tire of paying the life tax for noncreature spells and turn their ire on our commander. Typically the way to deal with creatures is to use noncreature spells, so at the very least you will get a parting gift of a two-point life drain in the exchange. But we shouldn’t make it easy on them—in fact, we have real motivation to have them use multiple spells to try to get rid of Kambal, so I’ve included solid ways to provide protection. Selfless Spirit plus Nim Deathmantle is quite a potent combination to save your entire team from many mass removal spells for just four mana each time you bring it back.

Speaking of creature control, one side-effect of keeping Kambal, Consul of Allocation around while making everyone draw more cards is that people are going to be encouraged to cast a lot of creature spells. If the battlefield gets too cluttered with creatures and you’re the player with the highest life total (which you probably will be), then people may get tempted to send them attacking in your direction. Thankfully, white and black have a bounty of good creature control spells, including all-stars Wrath of God and Damnation. Some of them appreciate having a little extra life to work with, such as Toxic Deluge and Anguished Unmaking. I wavered a bit on including Swords to Plowshares, since we are so dedicated to wearing down everyone’s life totals, but ultimately the card is just too efficient not to include for the occasions when one particular creature needs to be dealt with quickly and cheaply.

With all the card drawing in the deck, Pack Rat becomes a great mana sink that can grow out of hand with enough time and mana. I also like the army-in-a-can potential of Monastery Mentor with the extra cards we’ll be drawing. Teysa, Orzhov Scion and High Priest of Penance are some high-quality Orzhov creatures that nicely fill out the lower end of our mana curve. With lots of creatures hitting the battlefield, I figure there will also be many creatures dying along the way, so my hope is that we’ll get to use the morbid ability on Skirsdag High Priest quite a bit. Putting such downward pressure on opponent life totals makes Athreos, God of Passage quite good and keeps our creatures from permanently dying too often.

Frontline Medic’s battalion trigger can provide protection for our creatures the turn we need to sweep the battlefield with Wrath of God or Damnation. Fate Unraveler gives us another way to put pressure on opponents’ life totals. Sun Titan is a high-impact card that can bring back all sorts of tools destroyed along the way.

The last addition to my list is Karn, Silver Golem because it occurred to me you could make Aetherflux Reservoir into a creature. Then (assuming you’re over 50 life), if you’ve got Whip of Erebos on the battlefield to give it lifelink, you can “go off” and kill everyone around the table 50 points at a time. Another option would be equipping Aetherflux Reservoir with Basilisk Collar. Some might consider this a cheesy way to end the game, but sometimes when you are in the business that Kambal, Consul of Allocation is involved in, you have to quickly close the books and move to an undisclosed location. Since I am not playing any tutor effects, I think it’s fine to have that option in the deck for games that have gone on too long.

What do you think of the deck? Are there any big omissions to the list that you can see? How would you build the deck differently?