So if you’ve been following along, you’ll know that a few weeks back I realized that there were nine legendary creatures for which I’d not yet given the
Commander treatment this year, and with Khans of Tarkir and Commander 2014 coming up quick, if I’m ever going to get around to it, now is
the time. I’ve been covering them lightning-round style, three whole decks per week; normally when I write about Commander I like to focus on one deck and
dig pretty deep into how I went about building it, but I didn’t have enough time to give each remaining legend that level of treatment.

First was Athreos, God of Passage; Iroas, God of Victory; and Kruphix, God of Horizons. Last week was Keranos, God of Storms; Marchesa, the Black Rose; and
Muzzio, Visionary Architect. If you didn’t get a chance to check ’em out, please go back and let me know what you think.

Considering all the sweet stuff that’s being spoiled about Khans of Tarkir, it’s a good thing I’m wrapping things up this week with the final three legends
from Magic 2015. Let’s get cracking, shall we? 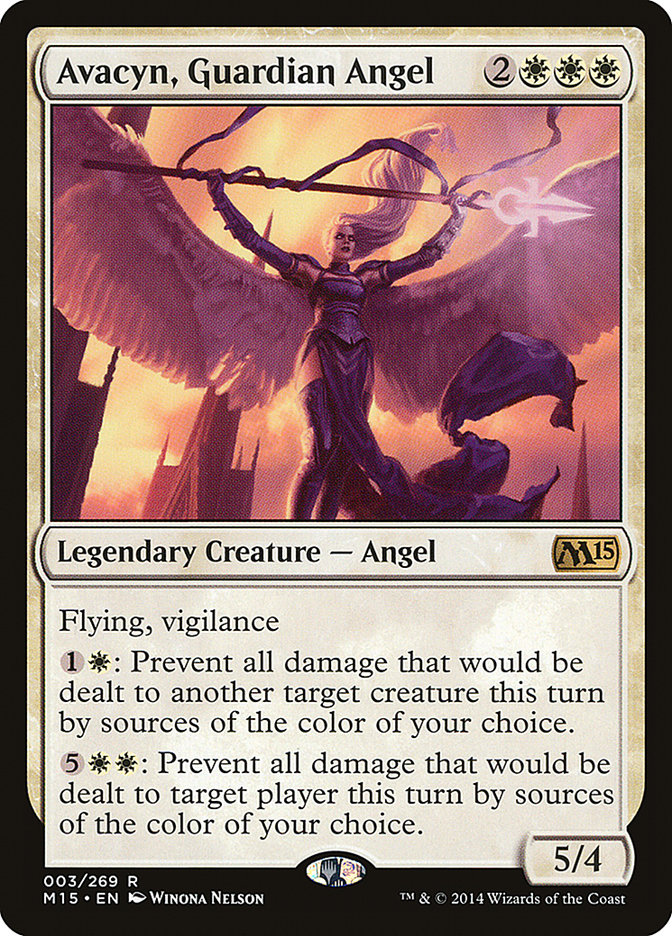 If you’ve ever had the pleasure of facing down an Avacyn, Angel of Hope Commander deck you know that Avacyn is a really tough creature to deal with once
she hits the board. This version of Avacyn is cheaper, which is nice, but honestly she’s considerably less powerful than her prior incarnation. Let’s take
a look at her abilities:

{1}{W}: Prevent all damage that would be dealt to another target creature this turn by sources of the color of your choice.

{5}{W}{W}: Prevent all damage that would be dealt to target player this turn by sources of the color of your choice.

Flying and vigilance are both very sweet abilities to have on a creature in multiplayer games, though her size is rather unfortunate. Five power is going
to require five hits to defeat someone with Commander combat damage, and four toughness isn’t going to let her block any decent threats on the table and
survive, and she can’t even use her ability to protect herself. Her last ability is pretty sweet, but the activation cost is steep. I think looking at
Avacyn, Guardian Angel with a cold, calculating eye you’d have to honestly question why you’d play her in Commander at all, much less pick her as the
Commander to build your deck around.

I have to admit, what most draws me into building Commander decks tend to be cool abilities, and Avacyn, Guardian Angel falls short. But then I have to
take a step back and consider how liberating that can be-for many Commander decks, the commander itself is of vital, often critical importance, and if
disaster falls – say the card gets shuffled into your library – the rest of your deck can just fall flat. If your play group is fond of tuck effects, it
can behoove you to not lean quite as heavily on your Commander as I typically do when building my decks. So what I think I’ll do when building an Avacyn,
Guardian Angel deck is not really focus on her being in play early and often, but rather build a deck that functions just fine without her but gets a
little boost when she’s in play.

I decided to focus on White’s ability to redirect and prevent damage, often tied to creatures, and that would certainly play nice with Avacyn, Guardian
Angel out there. Here’s what I cooked up:

The first cards to hit my radar were the en-Kor gang, particularly Shaman en-Kor who is the king of damage redirection. When thinking about creatures to
redirect the damage to, Stuffy Doll popped up quick-how much fun is that? Whoever’s looking like the most aggressive player on the table, drop Stuffy Doll
calling him as the player all damage dealt to Stuffy Doll is redirected to that person! Of course once that player is dead you’d ideally need some way to
reset Stuffy Doll, but that’s not a problem — Planar Guide and Stonecloaker can do the trick.

With the damage reduction and prevention, this is quite the grindy kind of deck, so I thought it made sense to add some of White’s equipment-fetch cards to
dig up Helm of Kaldra, Shield of Kaldra, and Sword of Kaldra. Getting all three in play (with the Shield first for indestructibility) gives you a very
powerful instrument to end games in Kaldra, the avatar token. Inquisitor’s Flail is an interesting piece of equipment that I think most people
understandably avoid, but in this deck with damage redirection and prevention, it might be worth trying out.

Palisade Giant is quite nifty alongside Avacyn-you can basically prevent all damage to you and all creatures you control (of a single color) for each 1W
activation…. Or better yet, redirect all that damage dealt to Palisade Giant to Shaman en-Kor, then redirect it the Stuffy Doll! 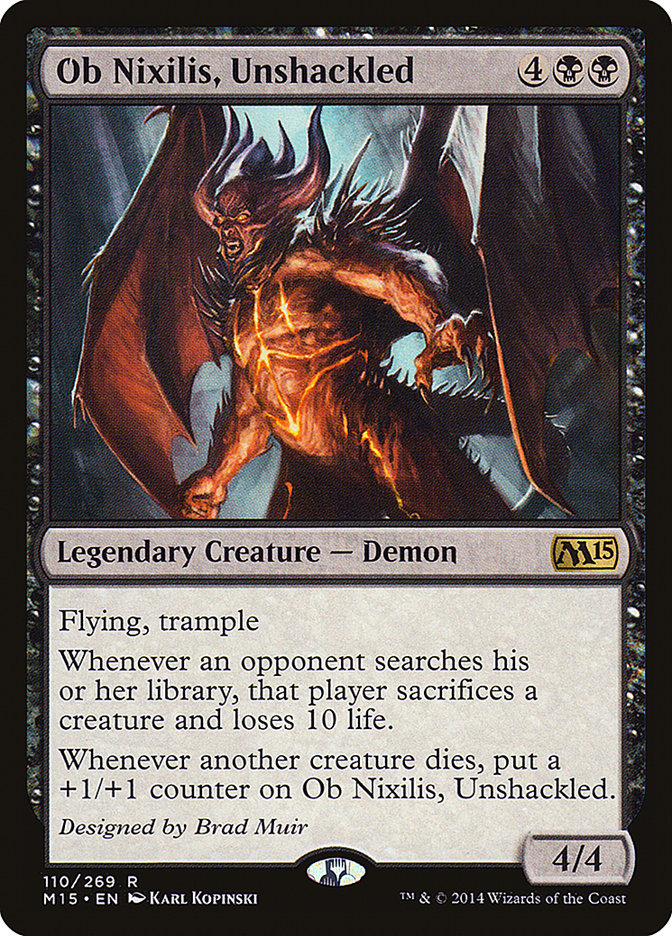 Next is the new incarnation of big, bad demon Ob Nixilis. I suppose being “unshackled” means he has flying now, eh? Mr. Unshackled is a bit pricey
mana-wise, but he packs a nice punch. Let’s take a look at his abilities:

Whenever an opponent searches his or her library, that player sacrifices a creature and loses 10 life.

Whenever another creature dies, put a +1/+1 counter on Ob Nixilis, Unshackled.

His stats start off pretty small for a six mana creature – 4/4 – but his potential for growth is unlimited given how good Black is at killing creatures,
and when you add that to his flying and trampling abilities that can translate to something lethally large.

I have to admit, when I first started researching cards for this deck, for some reason I read the first triggered ability as “whenever an opponent shuffles
his or her library…” This led me to quickly pull cards where I could search my opponent’s library and remove cards from it – Jester’s Cap, Praetor’s Grasp,
stuff like that. After the spell resolves, my opponent shuffles his deck and voila! Sacrifice a creature and lose 10 life. After adding those cards to the
list, I had my RTFC moment and realized my mistake-my opponent needs to actively search his library for the trigger to go off. There are actually not many
ways to force your opponent to search his/her own library against his will — Maralen of the Mornsong is pretty much it (and she went right into the deck).
Even Ghost Quarter is a “may” ability so if your opponent doesn’t want to take the life hit he/she can just decline to search for a land.

I decided to go ahead and keep some of the cards that let me search my opponent’s deck and remove cards in order to break up combos and came up with this
very controlling deck:

The plan here is to keep threats off the board with removal while preemptively attacking opposing libraries to strip out unbeatable win conditions. I added
Salvaging Station and a bunch of cheap artifacts I can use and get back when creatures die (Mishra’s Bauble, Expedition Map, Nihil Spellbomb), and I
figured why not go ahead and toss Vintage powerhouse Yawgmoth’s Will into the mix? Dark Ritual and Bubbling Muck might be going too deep into the
Yawgmoth’s Will rabbit hole but what the heck.

With all the creature control I’ve incorporated a few extra ways to take advantage of the dying with Mimic Vat, Black Market, and Beacon of Unrest. 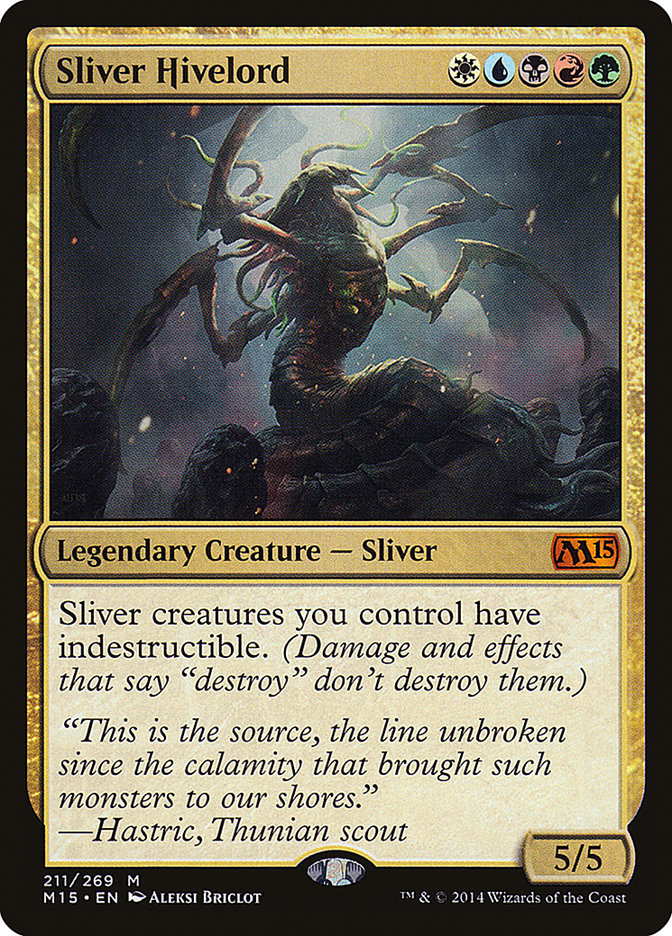 Last but not least is the latest legendary sliver to hit the dance floor. I’ve had a lot of requests over the years for a write-up on a Sliver Commander
deck, but I’ve held off for a variety of reasons, chief among them the fact that playing a Sliver deck freaks out most players. Understandably so-Slivers
are fast and scary, and can kill people quickly. Plus, just take a look at that card text:

Sliver creatures you control have indestructible.

When you sit down at a table and reveal that you’re playing a Sliver deck, you become the default Public Enemy #1. If your opponents don’t come at you hard
you’re going to swarm out and overwhelm someone fast… unless your board gets swept away. I don’t typically like to play a game of Commander where I’m the
enemy from the very beginning, and I also don’t like playing aggressive decks that tend to overextend into mass removal if you can’t kill before then.

So I decided to approach building my first Sliver deck a bit differently. I can pick and choose the number and types of Slivers I play-I don’t necessarily
need to run every Sliver in existence, I don’t need to be aggressive and fast. But what I can’t control is my opponents’ initial fear of my deck, so I
decided to build my deck with defense in mind first and foremost, and to focus on the more expensive, higher-impacting Slivers rather than the cheap and
aggressive Slivers. Here’s what I cooked up:

The idea is to use some Fogs–Constant Mists, Moment’s Peace, Illusionist’s Gambit-and cards like Ghostly Prison to keep from dying to other aggressive
decks, sweep the board periodically with a Wrath of God or Damnation, and eventually play my Commander possibly even as the first Sliver to hit the board.
Drop a Sliver Overlord next turn, and I should be in pretty good shape. I can toss in some pinpoint removal, a few counterspells, even the handy-dandy Time
Stop. Composite Golem plus Nim Deathmantle ensures you can cast any number of your five mana Slivers.

So what do you think of this slightly different take on Slivers? Or regarding the other decks above? I’d definitely love to hear your thoughts.

And with that my slate is clean and ready for Khans of Tarkir-just in time too, given how much has been spoiled so far, it looks like a super-fun
set! You can be sure I’ll be giving the Commander treatment to our new Khan overlords, but in the meantime there are a bunch of sweet new cards I want to
explore for Standard and Modern-the prerelease can’t come soon enough!