The robed woman at the vendor stall completed her purchase, then placed a comforting hand on Chandra’s armored shoulder.

“Seems you’ve had a hard day, my dear,” she said softly, beaming an inviting smile at the two Planeswalkers.

Chandra bobbed her head at her and sniffled loudly. She managed a wan smile and squeezed the woman’s hand back. There was something comforting and familiar to her face.

The robed woman pulled an elaborately embroidered handkerchief from around her pockets and pressed it into the pyromancer’s hands. Chandra buried her face into it, wiping away tears. It smelled of rose tea with a hint of machine oil…like…home.

“Oh, that’s it now, dry your tears…” the older woman said, lowering her voice as Chandra finished dabbing her eyes and blowing her nose into the handkerchief.

“We need you to be strong,” she continued, her voice suddenly turned steely and clear, “when we find your mother and take her back from those Consulate soldiers, Chandra.”

Chandra looked up into a face that she now recognized. “Mrs. Pashiri?” 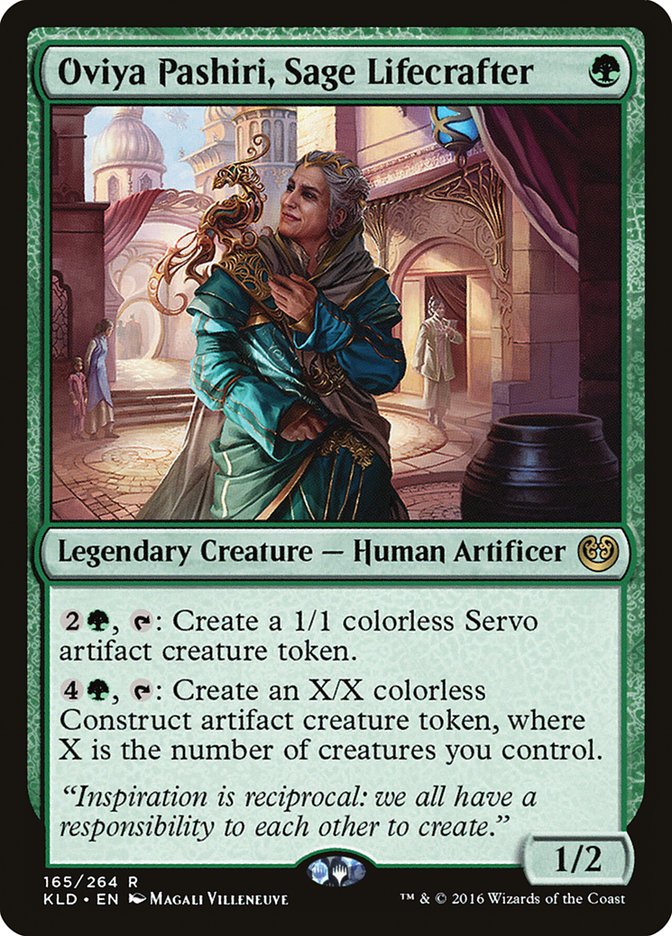 Have you been reading the Magic Story lately? I have to admit that until recently I usually just skimmed the backstory and got my context from the art and flavor text on the actual cards, but for some reason the story of the Gatewatch coming together, Liliana joining up, and now Chandra’s adventures in Kaladesh have really hooked me into the storyline.

What’s particularly fascinating to me is how they’ve tied green into artifacts for this set. I’ve been a fan of green cards a long time, ever since opening up a starter deck from Unlimited and seeing Force of Nature and falling in love. 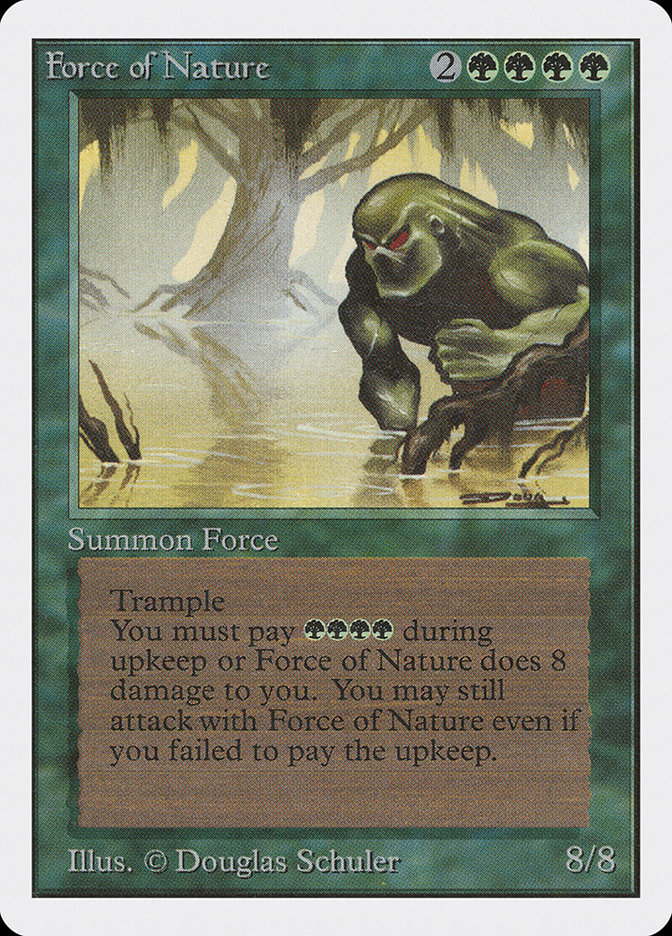 One of green’s driving characteristics has been its hostility towards artifacts, with the idea that artifacts are artificial and an affront to nature. History is chock-full of green cards that destroy artifacts quite well. In Kaladesh, though, the artifice is woven into the fabric of life rather than being separate. It’s somehow part of nature rather than being artificial. The green legendary creature Oviya Pashiri, Sage Lifecrafter embodies that philosophy.

In “Renegade Prime” and subsequent chapters we learn a few things about Oviya:

· She is one of the most famous inventors in the world, as well as a fierce board game enthusiast.

· She has many renegade contacts.

· She has tools to pick a lock.

· She’s a widow, having buried her partner long ago.

When building a Commander deck around Oviya Pashiri, Sage Lifecrafter, I wanted to let her flavor and personality inform my choices. This led me to do something I’ve never done before: a mono-green deck that is focused almost exclusively on artifacts. This presents some challenges. For one thing, green really doesn’t do well searching for specific artifacts you might be looking for. And there aren’t too many things in green that get better with artifact synergies. Still, there are some upsides: green is pretty good at getting stuff back from the graveyard when the inevitable battlefield sweeper like Nevinyrral’s Disk or Akroma’s Vengeance breaks all the beautiful things you’ve got on display.

First off, I wanted to make sure to support her inherent abilities to create artifact token creatures with just mana and time. Green boosts this theme with Doubling Season along with the similar cards Parallel Lives and Primal Vigor. If we’re going to be pumping out token creatures, I naturally thought about Beastmaster Ascension as a way to turn the little 1/1 Servo creatures into real threats, but then I changed my mind due to flavor reasons. The Servos are not Beasts and have little in common with the savage tigers shown on the artwork. Instead I decided to go with Chief of the Foundry, which plays with the artifact theme better. 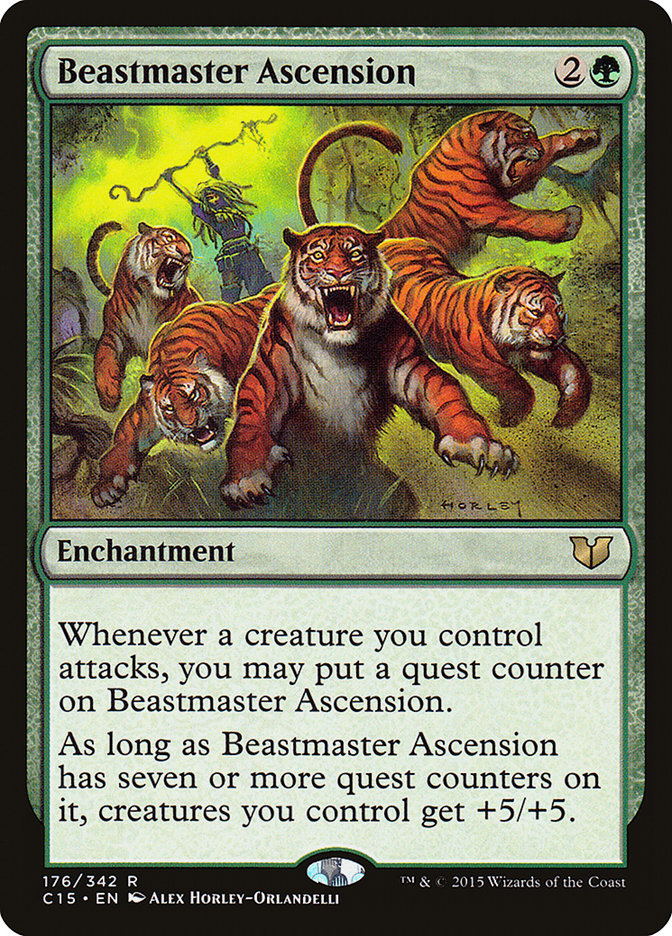 Little 1/1 Servo creatures are pretty good fodder for other effects, so I thought Skullclamp and Helm of Possession would fit right in. It’s a good way to feed Eldrazi Monument too, and I thought flavor wise Eldrazi Monument would certainly be a wondrous thing to an Artificer. And speaking of Artificers, Inventor’s Goggles seems perfect for Oviya, since her eyes probably aren’t as sharp as they used to be.

As a long-time Artificer and gamer, I figured Oviya would love to assemble machines that are spread across multiple cards. The most recent of these cycles? The Modules from Kaladesh. With each of these on the battlefield and something to fire off one of the triggers, you can basically turn each mana you have hanging around into an Energy counter, a 1/1 Servo token, and a +1/+1 counter. Pretty nifty! And the activated abilities can be quite useful too.

Of course, this is the original “machine” artifact cycle, only this one requires an additional piece, and when you have them all together, your machine fires up and keeps going until your opponents are dead. Here’s how they sequence:

You have an artifact to sacrifice that’s either cheap enough for Salvaging Station or have a suitable one in your graveyard already? Grinding à Summoning à Blasting à Salvaging à Repeat.

You have a creature to sacrifice with a cheap non-creature artifact in the graveyard to bring back with Salvaging Station? Blasting à Salvaging à Grinding à Summoning à Repeat.

This will give you the ability to deal as much damage you need with Blasting Station to kill all your opponents or mill your opponents’ decks into their graveyard as a backup.

To play nicely with Salvaging Station I’m including these gems:

I particularly like Ashnod’s Transmogrant, since I think Oviya might think it neat to transform herself into an artifact creature and the +1/+1 counter plays well with some of the other cards. Mishra’s Bauble and Urza’s Bauble play nicely with Salvaging Station when there’s a battlefield wipe to effectively draw you a card for each creature that dies. Getting back Welding Jar over and over can do wonders for keeping your beauties on the battlefield in the face of removal spells that don’t exile or have split second.

Magic 2012 had the cool Empires cycle. These cards didn’t click together to form a machine, but if you collected all three, each of them became more powerful. I figure Oviya might have these in her collection of wonders.

So all the games we’re playing here require the various pieces to be together on the battlefield to fire off. There are a couple of artifacts we could use to help assemble combos, but they cost a lot of mana: I’m looking at you, Planar Portal and Ring of Three Wishes. If I’ve got a bunch of extra mana lying around, I’m probably going to want to use Oviya’s abilities. However, there is Kuldotha Forgemaster that doesn’t require any extra mana to tutor out artifacts, and it even puts them directly onto the battlefield for the low, low cost of sacrificing some artifacts… which sounds like a pretty good job for a few 1/1 Servo tokens! Scroll Rack plus Journeyer’s Kite can churn through some cards too and help put together some of the cards we want.

Oviya Pashiri, Sage Lifecrafter is well versed in the resistance on Kaladesh, and I know that there are going to be players around the table who won’t want her to have her Artificer fun, so I’m including cards that will help us resist the removal that is sure to be aimed in her direction. I love that we have a new card in Workshop Assistant to add to Myr Retriever and Junk Diver to keep artifacts popping back out of the graveyard. We can make use of some green graveyard recursion with Genesis, Creeping Renaissance, and Seasons Past too, but the super-sweet slam dunk here is Trading Post, which can turn each of those Servo tokens into a new card drawn or an artifact from your graveyard.

If you’re really nice, trustworthy, and not prone to breaking things, then maybe Oviya might take you to a hidden chamber where you can see her Parlor of Wonders. This collection of rare and wondrous artifacts from across the planes is her inspiration to create. Many of these do wild and wacky things depending on what you’ve got on the battlefield—what sort of crazy things might happen with Dross Scorpion, Panharmonicon, or Clock of Omens? Filigree Familiar and Solemn Simulacrum have a simple beauty that any deck can appreciate. Metalwork Colossus is too remarkable a machine to let slip into the clutches of Head Judge Tezzeret, don’t you think? How nice that even if it somehow breaks you can offer up some Servo tokens to keep bringing it back.

The real treasure is not just an artifact but a friend: Karn, Silver Golem! I can’t imagine Oviya wouldn’t be filled with wonder at his ability to imbue life into unliving artifacts.

As a Smith myself, I was very happy to finally have a good reason to play Lifesmith in a Commander deck—not only is a good way to gain some life, but it’s an Artificer too!

I was lucky enough to open Oviya Pashiri, Sage Lifecrafter as a Prerelease foil when I played in a Prerelease over the weekend, so I guess it was fate that Mrs. Pashiri and I would do good work together. What do you think of the deck? Are there any wondrous things I overlooked that would go great in Oviya’s parlor? How would you build a Commander deck around her different from this one?