Happy Holidays everyone! I hope you were able to spend time with loved ones during the season, and if gift-giving was involved, that you got and gave some
great ones. Of course, sometimes the gift given doesn’t really line up with what the recipient’s wants or needs so afterwards it’s time to exchange the
gift… which segues nicely into today’s Commander deck built around Titania, Protector of Argoth!

Titania lets you trade your lands for a 5/3 beat stick, which is a heckuva gift exchange. What’s sweet is that Titania doesn’t care why the land is put
into the graveyard, so whether it’s land destruction or sacrificing land for profit, you still get your 5/3. There are so many lands that sacrifice
themselves for some effect that you could actually just run Titania, Protector of Argoth as your commander for a mono-green “good stuff” deck and spend
very few non-land slots to still get a nice bonus from Titania. Today though, I want to show what we can do when we lean hard and leverage Titania’s
ability for all she’s worth. 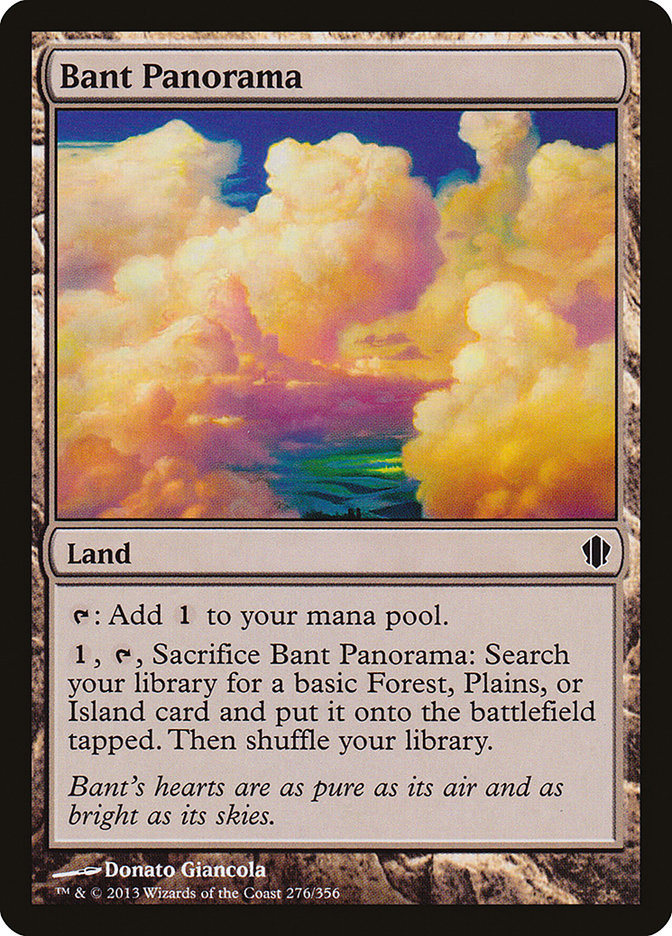 There are lots of lands that sacrifice themselves, and the ones that most people instinctively reach for to put in their decks are the fetchlands, like
Misty Rainforest and Wooded Foothills. I’ve always preferred the Panoramas over the fetches because I like having the option of holding off using the
search function until later in the game when you might want reset the top of your library if you’re using Sylvan Library, Scroll Rack, or Sensei’s Divining
Top. The problem with the fetchlands is that they can’t provide you mana on their own so if you need the mana you’ve got to sacrifice them right away.
Sure, the Panoramas are a bit “slower” than the fetchlands, but I think the extra utility makes them worth it. Petrified Field is particularly nice in a
Titania deck since you can sacrifice it to get back another land that can sacrifice and churn out a couple of 5/3s. Glacial Chasm is also a slam dunk for
Titania since it sacrifices a land when it enters the battlefield and self-sacrifices when you no longer want to pay the cumulative upkeep, and in between
it can protect you from damage. 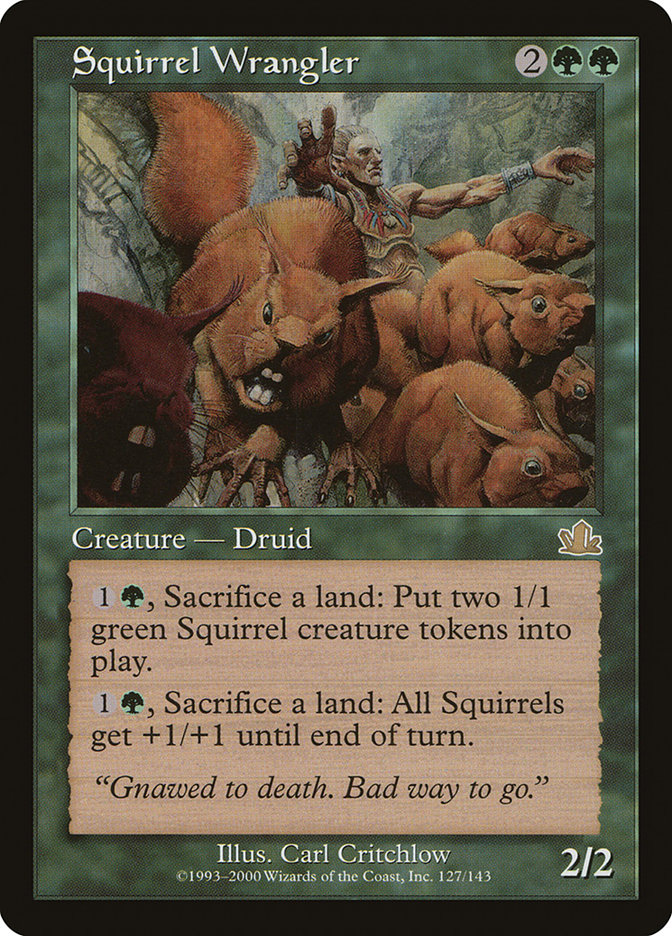 Outside of the self-sacrificing lands, there are plenty of other ways to send your own lands to the graveyard from the battlefield. I chose Claws of Gix
over Zuran Orb because I liked having the additional flexibility of sacrificing any of my permanents rather than being limited to lands, even if it’s a
little more mana intensive to use. In particular I wanted to be able to sacrifice Titania herself since this deck is so focused on her abilities we’d hate
for her to get “tucked” into our deck, and Claws of Gix can help with that. Sylvan Safekeeper also provides protection from targeted effects and the cost
is a perfect complement. Crop Rotation is always a solid card when you’ve got lands worth fetching at instant speed, and alongside Titania it can provide
multiple 5/3 bodies out of nowhere. As a sorcery Scapeshift is slower, but it can be much more explosive-just imagine sacrificing four lands and getting
Strip Mine, Glacial Chasm, Naya Panorama, and Petrified Field. Terastodon is a utility all-star, being able to nuke all sorts of permanents, but in this
deck with Titania out there you can just destroy your own lands and get 3/3 Elephants along with 5/3 Elementals.

Titania’s ability pushes a few fringe cards into being playable. Sandstone Deadfall being able to kill an attacker while making two 5/3 blockers can make
attacking your problematic. Edge of Autumn is a nice way to accelerate your lands early on, but the restriction of only being able to be cycled away later
in the game by sacrificing a land means you’re not usually going to be playing it in Commander… except in a Titania deck, where that cycling cost can be a
huge benefit! Last but not least, there’s the cute and funny Squirrel Wrangler, which alongside Titania gives you two 1/1 Squirrels along with a 5/3
Elemental for each land you sacrifice. Been looking for a way to use those cool StarCityGames.com Squirrel tokens? Here you go! 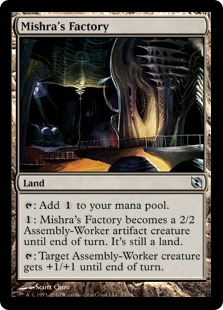 Manlands are usually pretty decent in Commander since they generally avoid the sorcery-speed mass removal that’s so commonly played. They get some
additional juice with Titania in play since they are usually quite small compared to other creatures on the battlefield, so they’re pretty easy to trade-up
if you can force it into combat. Cards that transform lands into creatures that are still lands serve a similar function, like Genju Of The Cedars, Nissa, Worldwaker, and Kamahl, Fist of Krosa. This seems like a good deck to finally get some mileage out of Earth Surge, right? That +2/+2 boost is especially
nice with lands woken up by Nissa.

I’m a little iffy on Life and Limb, which is a strange Planar Chaos card that I’ve yet to feel the urge to play until now. Turning all your Forests into
1/1 Saproling Forests seems really cool with Titania in play, but fairly mediocre without her; this is the sort of card you’ll want to shuffle away from
Sylvan Library or Scroll Rack with a Panorama if you don’t have Titania out there. Natural Affinity is a card I’d mostly want to use if someone casts a
mass removal spell like Wrath of God when I have Titania in play-nuking everyone’s lands and creatures while leaving behind an army of 5/3s sounds like a
great way to end a game out of nowhere when the person casting the spell was counting on stabilizing the board.

Reaping What You Sow

Titania has another pretty sweet ability, and that’s taking a land already in your graveyard and putting it back onto the battlefield when she enters the
battlefield. So let’s leverage that ability a bit more with Conjurer’s Closet, and to some extent, Nim Deathmantle (assuming you can get Titania killed).
Restore can do that as a one-shot, but has the flexibility of being able to nab a land in someone else’s graveyard-say, someone’s Maze of Ith. Life from
the Loam gathers up a handful of lands from the graveyard, so I’ve included a few cycling lands since that combo works quite nicely. Surveyor’s Scope is a
pretty sweet artifact that lets you “catch up” when opponents have been ramping their mana ahead of you, but in this deck it’s pretty easy to trim off a
few lands to leverage the power of the Scope more. And if ever there’s a deck where Crucible of Worlds shines it’s this one! 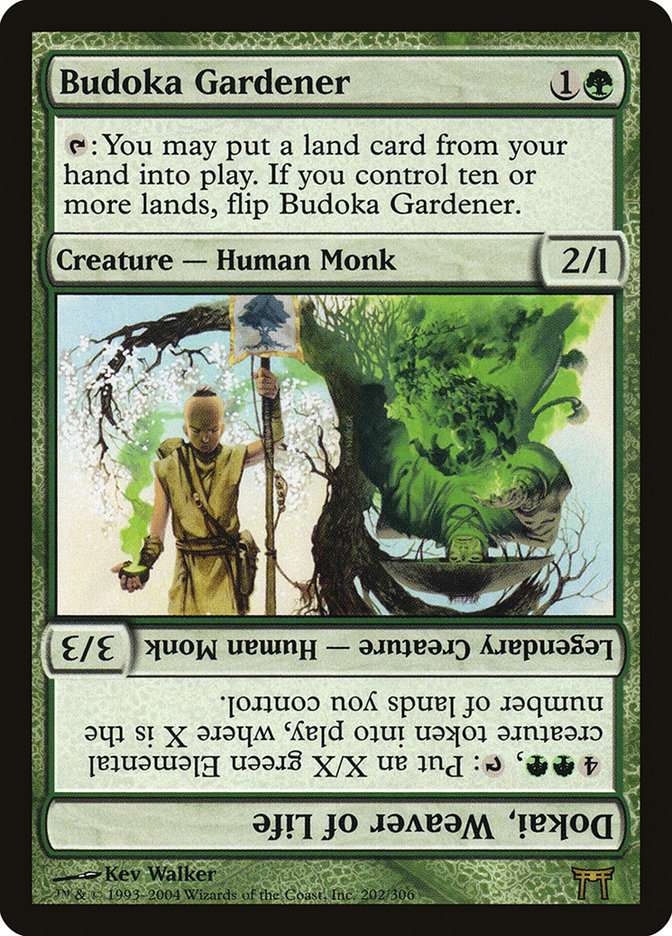 Since the basic plan is to sacrifice lands to churn out 5/3s, I figured it would be important to run more lands than I normally would and have ways to
accelerate the lands into play. Exploration, Burgeoning, Budoka Gardener, Kodama’s Reach, Peregrination, and Tempt With Discovery boost acceleration. It
should be pretty easy to flip Budoka Gardener into Dokai, Weaver of Life and start cranking out giant Elementals over and above any 5/3 Elementals Titania
has given us. Horn of Greed and Lifegift should provide some nice additional rewards for playing a lot of lands, and we should get plenty of landfall
triggers for our Rampaging Baloths and Avenger of Zendikar. With a few ways to find specific lands in the deck, I thought it would be pretty easy to toss
Scrying Sheets in here and run all my basic Forests as Snow-Covered. 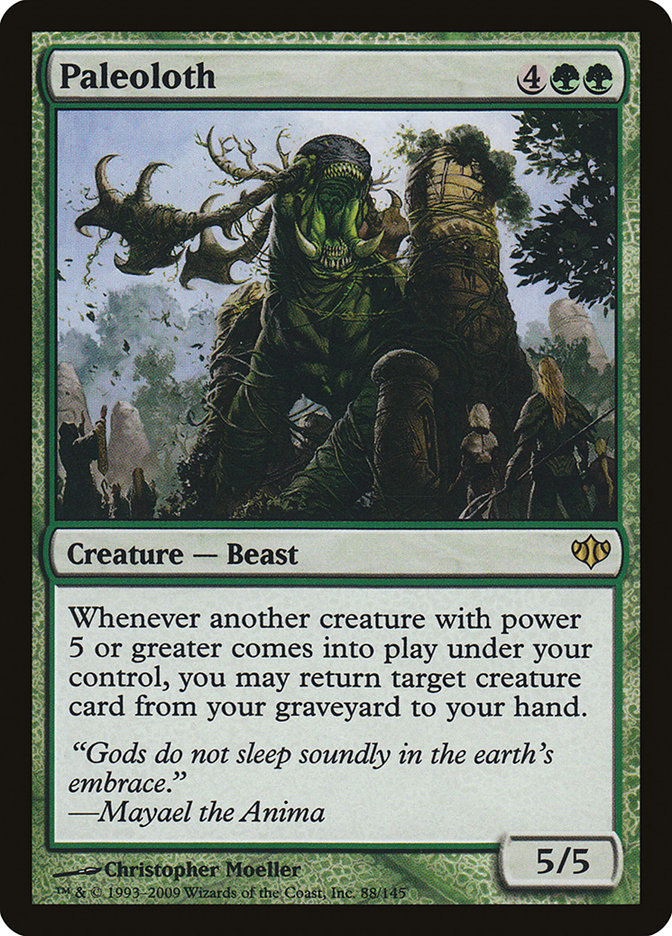 Since Titania is churning out 5/3 token creatures, it seems like an easy call to add some cards that enhance that fact like Parallel Lives and Doubling
Season. If we look at the cards I’ve already added to the mix we’ve actually got quite a few token makers-there are 4/4 Beasts, 3/3 Elephants, 1/1
Squirrels, X/X Elementals, and 1/1 flying Insect tokens with deathtouch. If you can crank out multiple tokens at once, Oran-Rief, the Vastwood gets quite
nice for boosting all of them. Going back to Titania’s tokens, they’re of sufficient size to set off the triggers for Garruk’s Packleader and Paleoloth,
and they can benefit from the activated ability of Spearbreaker Behemoth. Since the plan is to have Titania in play early and often, Thunderfoot Baloth
makes a lot of sense, making Titania’s tokens into 7/5 tramplers-WOW!

There are quite a few ways to churn out a bunch of 5/3 tokens with Titania all at once, some of it at sorcery speed, and I thought it might be helpful to
give them all haste so you can launch a surprise massive assault. I considered Concordant Crossroads, but since it helps everyone at the table I decided to
go with the more expensive but infinitely more awesome Akroma’s Memorial.

What do you think? If you’ve had a chance to play with Titania yet, what was your impression? Are there any cards you think I’m overlooking in this deck?

Have a great weekend everyone!