Hello everyone! I hope you had a great Christmas and found time to spend with family and friends. As I write this, I’ve just finished up visiting with my kids and left them with their mom. At thirteen- and eleven-years-old, they’re at the age where many of their gifts are fun for grownups too—at least those of us who are still kids at heart. I still haven’t managed to get ’em hooked on Magic yet. But my mom gave us a Kindle Fire HDX as a family gift for me and the kids, and I’ve downloaded Magic 2014 Duels of the Planeswalkers (the full version) as a trap for them. Currently they seemed to be near obsessed with Scribblenauts Remix, but I have faith that eventually they will tire of it and one day when they’re feeling bored they’ll click on that little funky Magic icon and get the bug. Fingers crossed . . .

I got some great feedback on the Shattergang Brothers deck last week. Apparently there are a lot of y’all that like to break things and inflict misery on your opponents! Even though I included Hammer of Purphoros in the deck as a dual-purpose enchantment and artifact, I forgot to mention that the creatures that the Hammer can hit the trifecta by turning a land into an artifact enchantment Golem creature. That’s pretty darn sweet for a Shattergang Brothers deck!

Also, thanks to everyone who provided a vote for which new legend from Commander 2013 they wanted me to cover next; I got a good response and was a little surprised by how the votes tallied. Roon of the Hidden Realm and Oloro, Ageless Ascetic tied for first place and just barely edged out Gahiji, Honored One, with Prossh, Skyraider of Kher way behind and Jeleva, Nephalia’s Scourge dead last. As much as I love Roon and can’t wait to build a deck around him, since I just did the other new Bant Commander two weeks ago I think I’ll step over to Esper and give Oloro, Ageless Ascetic a whirl. 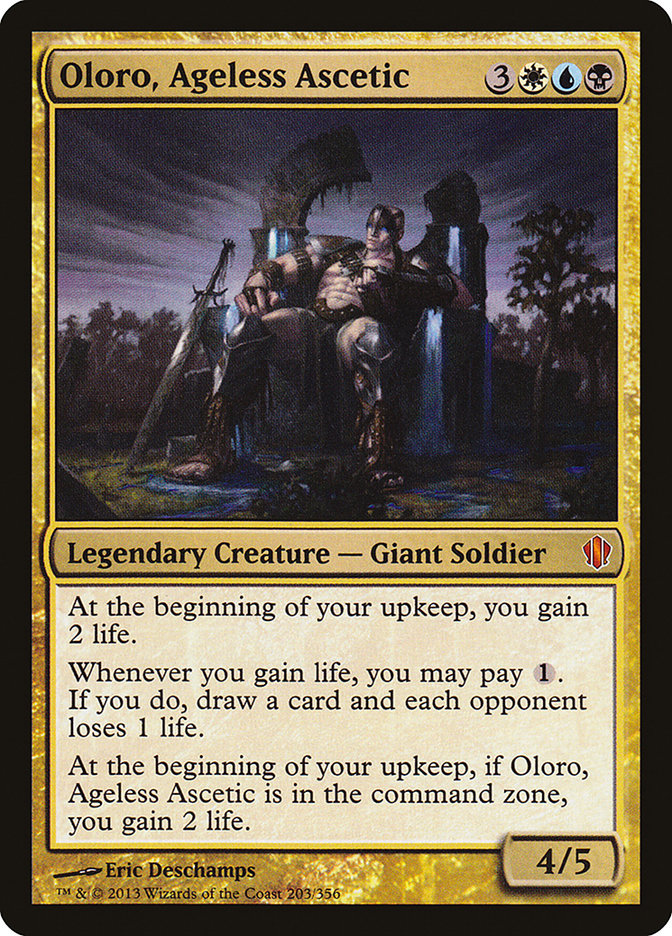 The artwork on Oloro cracks me up. The name "Oloro, Ageless Ascetic" doesn’t really evoke what’s on the art, which is a big-ass giant soldier kicking back and chilling on his makeshift throne with the built-in waterfall bidets. But the art does seem to match up with the mechanics of the card, combining to whisper in your ear, "No worries, mon . . . no hurries . . . just chill out, relax, I’ll slip you some life every turn so you don’t fall behind and then . . . eventually . . . I’ll come by and mop things up." This is a dude who’s not in any big hurry, and he’s got the mana cost to prove it.

I was half-tempted to build a strange midrangey Soldier deck around Oloro, but for this first exercise I think I’ll just focus on the life-gain theme and see where it takes us.

Life As Your Win Con

Life totals are an interesting currency in Commander. They can be used as windsock to help choose a target for attack ("who’s got the highest life total?") or be used to discourage an attack if life totals are high enough to make attacking seem relatively worthless. It’s relatively easy in Commander to assemble ways to rack up ridiculously high life totals, which is why the smart folks who invented EDH/Commander cooked up the whole thing with commander damage—even if you’ve got "infinite" life, 21 points of combat damage from a single commander will take you out. 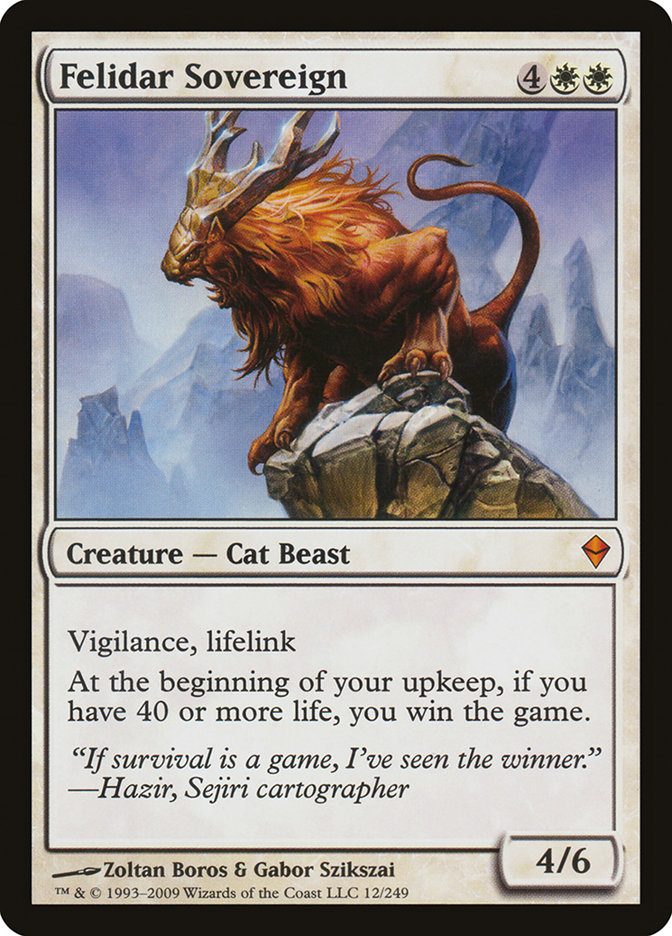 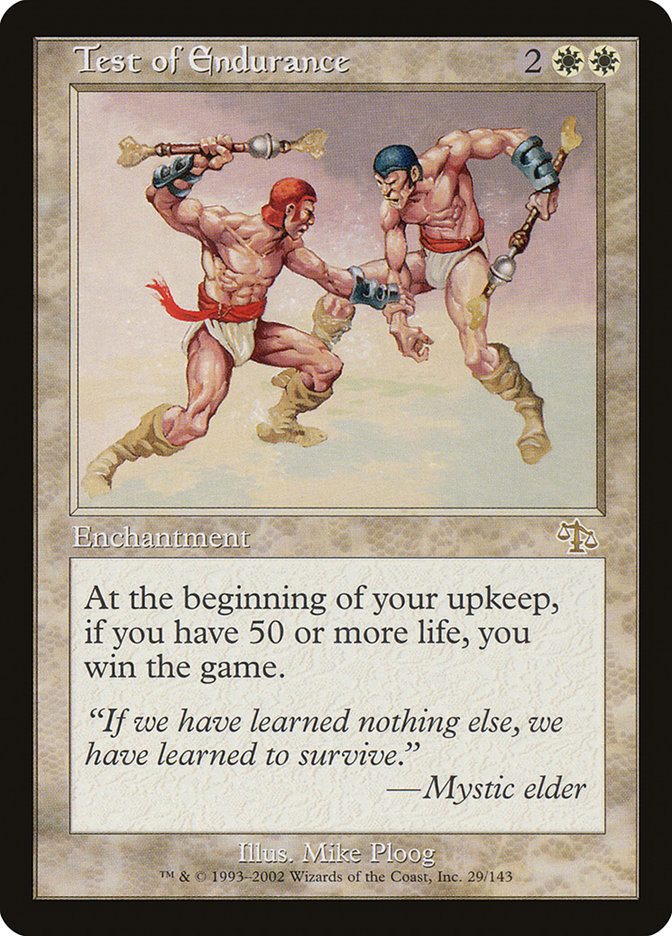 Regardless of that damage loophole, it’s typically better to have a nice buffer between life and death since if you’re bleeding badly the sharks will start circling. Oloro lets you start building that buffer from the very first turn before you’ve even played a card, sending you life love notes from the command zone. There are a few cards in Magic that can give you a victory if you have a high enough life total; Commander’s rules give you a jumpstart on that by doubling your starting life total, and Oloro effectively gives you a bonus two points right off the bat.

For Felidar Sovereign, you’re already there—keep your total at 40 or more by the time you cast him and keep him and the totals high until your upkeep and boom, you win! Of course, at six mana that could be a little tricky. Test of Endurance is a little more durable and a little less costly but requires you build your life total to 50 in order to trigger during your upkeep ("no problem, mon . . . I got you covered"). 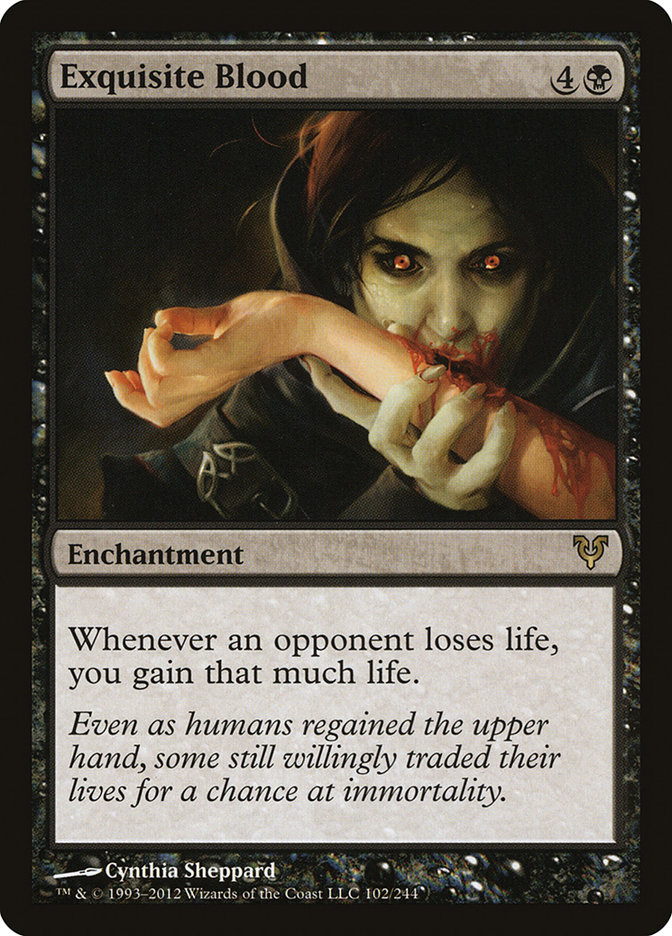 Since we’ve got black, we can of course throw in the evil one-two table-kill enchantments Exquisite Blood and Sanguine Bond. Both enchantments actually play quite well with what the deck wants to do, but if you’ve got both in play and either gains a pip of life or deals a pip of damage, there will be a cascade of life gain and damage that will kill everyone else at the table you can target. Also note that Vizkopa Guildmage can do a nice Sanguine Bond impression if Exquisite Blood is in play, but even if neither evil enchantment is on the board, Vizkopa Guildmage can go a long way toward turning all your life gain into serious pain for the rest of the table—even those you can’t target directly!

Even if nothing else in your deck gains life, Oloro himself is bound to provide a boatload of life throughout the course of the game. Still, if we’re going to lean hard on the life-gain theme, there are plenty of great cards we can slide into the deck. There is no shortage of white cards that gain life and a fair number of black and artifact cards. Cards with extort supplement Oloro’s steady stream of life points quite nicely, and there is a gaggle of life-gaining Angels that are quite good cards all on their own.

If we’re going to be gaining all this life, we can also add in some cards that give us benefits for gaining life. There are quite a few of those to choose from when sifting through all the cards ever printed, including Oloro himself who gives you cards for mana each time you gain life. The two mono-white Ajanis—Caller of the Pride and Goldmane—have pretty sweet ultimates that get better depending on your life total. Cradle of Vitality can add some serious amount of +1/+1 counters, as can Archangel of Thune. And Drogskol Reaver can play the card-drawing role of Oloro without costing you any extra mana.

Of course, to benefit from all the life-gaining shenanigans, we’ll need to make room for nuts and bolts Magic stuff. I’ve got a fair number of removal spells—Swords to Plowshares and Path to Exile, Wrath of God and Damnation—and a fair number of cards dedicated to handling indestructible Gods that aren’t creatures: Revoke Existence, Oblation, Act of Authority, Spell Crumple, Return to Dust, Merciless Eviction, and Ashen Rider. I’d like to give Exclusion Ritual a try—even if the God is placed back into the command zone, the Ritual should still prevent the card from being played. 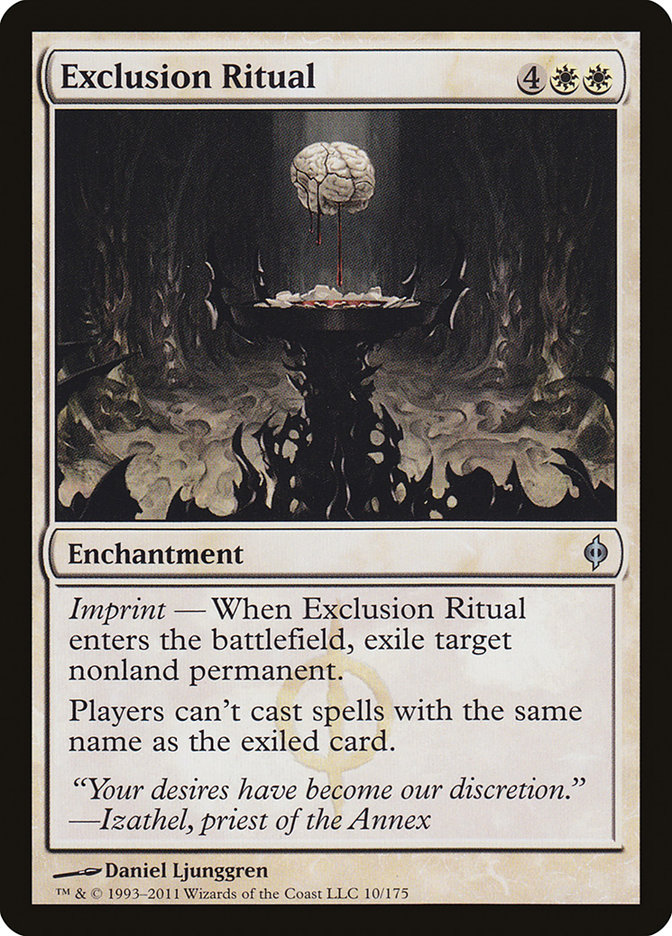 Here’s what I’ve cooked up for Oloro, Ageless Ascetic:

So what do you think? If you’ve got any other ideas I missed or suggestions from your own Oloro deck, please post in the comments below!

Happy Holiday my friends—have fun, be safe, and I’ll catch you next year!