While I am by and large quite happy with the new rules changes coming with Magic 2014 regarding legends and planeswalkers, I did have a small twinge of regret. I’d had a small stack of cards and a deck idea brewing for quite a while based around Sakashima the Impostor and the idea of building a deck based off cloning other people’s creatures. I’d even recently procured a copy of Sakishima’s Student—NINJA!—to put in the deck.

Of course, part of the allure in playing a Commander deck chock full of clones is that you can use the clones to keep problematic legends off the board—but under the new M14 legend rules that no longer applies. I previously wrote about how that’s a good thing for Commander play overall, but now when I looked at my little stack of cards with Sakashima sitting on top, I’d sigh and wish I’d moved a little faster in pulling the deck together.

Just this week though I came upon an interesting thought: are there any blue legends with sweet enters-the-battlefield abilities that I could copy with clones without nuking the original? Scanning through Gatherer didn’t yield up too many prospects until… 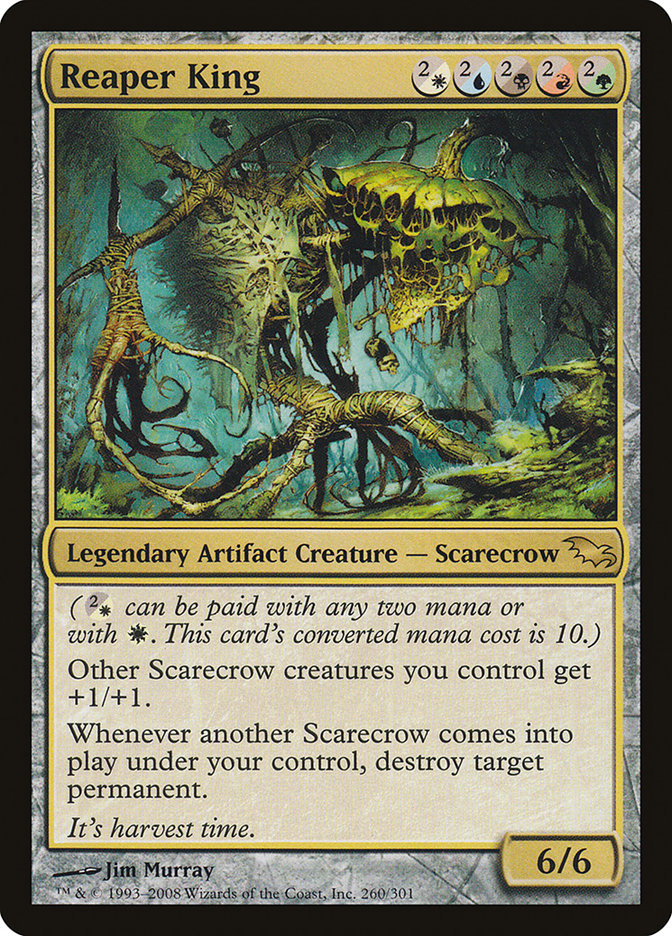 Reaper King was already an interesting commander if you toss in a few of the more playable Scarecrows, Changelings, and Conspiracy, but under the new rules clones get a nice bonus added to the mix. Even if you don’t already have some other Scarecrow or a Changeling in play, you can just clone Reaper King himself to get the Vindicate effect!

Of course, this is just one dimension of the deck. By playing a ton of clone effects under the new M14 rules, who knows what crazy combos you can construct based on copying other people’s legends? I’ll copy your Aurelia, the Warleader and your Ulamog, the Infinite Gyre; or I’ll copy your Ghave, Guru of Spores and your Grimgrin, Corpse-Born; or I’ll copy your Borborygmos Enraged and your Rafiq of the Many!

Yeah…I think this is going to be a fun deck!

Attack of the Clones 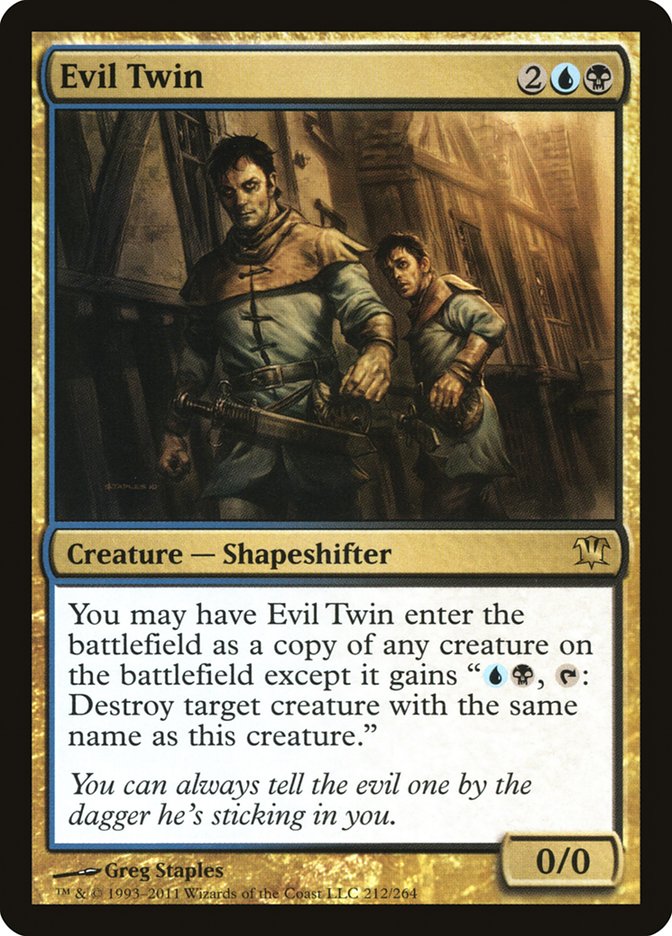 Yep, there’s a ton of cool clone effects available, and I don’t even have all of them! I chose what I thought were the very best of the bunch. One thing that bothered me about my Sakashima the Impostor deck were the red cloning effects I couldn’t use (and the green Spitting Image), but with Reaper King I can have them all! I particularly love the idea of putting Splinter Twin on Reaper King, giving him the ability to tap: destroy target permanent.

By the way, Evil Twin becomes a real jerk under these new rules. I’ll copy your commander, tap, and kill it; I get to keep my copy, and if you ever try to cast yours again, I’ll tap and kill it again! 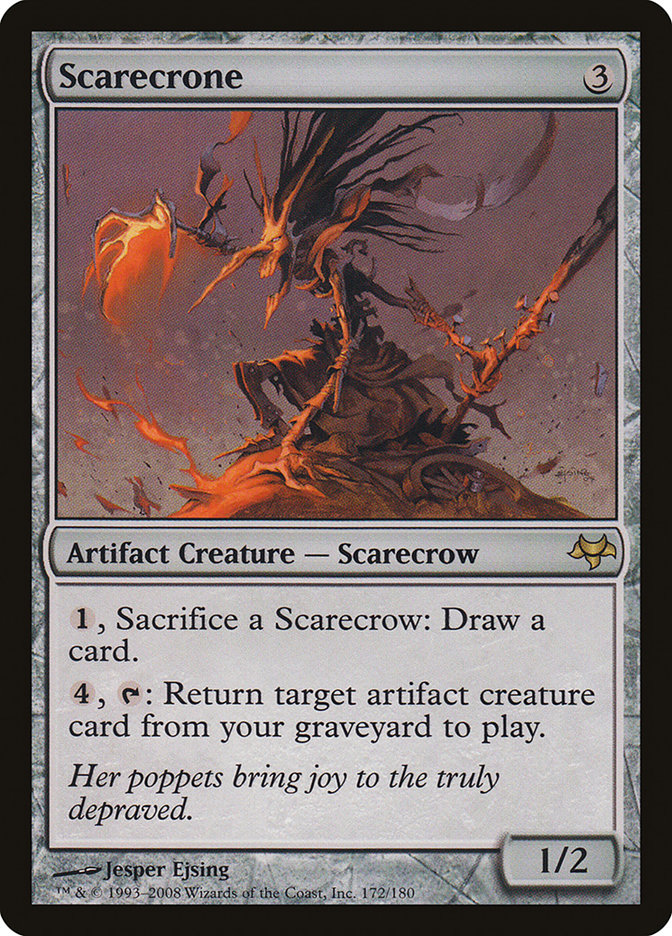 I had a few more actual Scarecrows and Changelings in my initial drafts, but some of them got cut as I trimmed down to 62 cards. Shapesharer is a Changeling that can become a clone, which is pretty much on point with what I’m trying to do with the deck. I’ve always liked Scarecrone, and I think she’ll do some good work here: Clone Scarecrone, sacrifice Scarecrone to draw a card, then tap the clone and four mana to bring Scarecrone back. 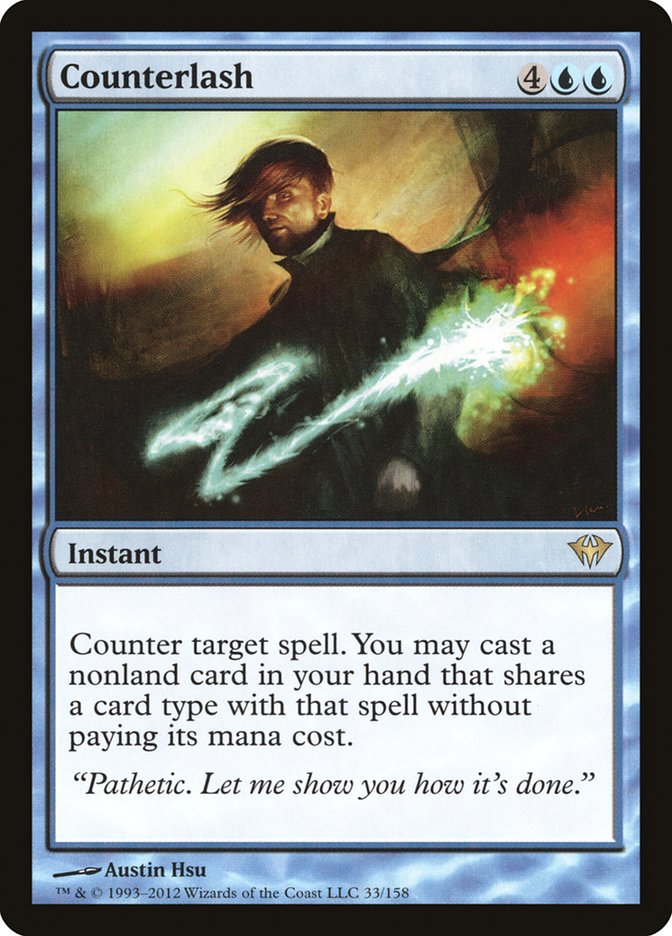 Since this is a clone deck, I’m going to be running heavy blue so protection will often mean counterspells. I’ve got a couple versions of "Seal of Force Spike" in here to keep people honest. I’ve got Seal of Doom, No Mercy, and Dissipation Field as rattlesnakes to keep people away and Edric, Spymaster of Trest to entice people to attack each other.

Here’s what I’ve put together:

I’ve got some added spice in the mix:

Biovisionary: If I’m already running a ton of clones, why not toss in an "Oops, I win!" card? It’s why Infinite Reflection made the cut.

Boldwyr Heavyweights, Weird Harvest: If you’re running a deck all about cloning stuff, then you want your opponent to have sweet stuff to clone, right? Here you go.

Mirror Gallery: I had this as a "tech" card in my original pile of cards for the Sakashima the Impostor deck, but I think it makes an even more interesting tech card in this deck under the new rules. Progenitor Mimic copying Reaper King with a Mirror Gallery out? Don’t mind if I do!

Riku of Two Reflections: So each time I cast a clone I can spend two more mana to copy the clone? Don’t mind if I do!

So what do you think? I’m dying to hear your thoughts and suggestions in the comments below!

Unfortunately, I was unable to attend the most recent Commander tournament at Richmond Comix, but I got word that Taylor Day pulled off such a sweet play that everyone immediately wanted to nominate him for the award. I asked if he could recount the play, and, sure enough, I think it showed the sort of complicated, wild, and unpredictable big plays that are the meat and potatoes of this format. Here’s what he told me went down while playing his Lazav, Dimir Mastermind deck. 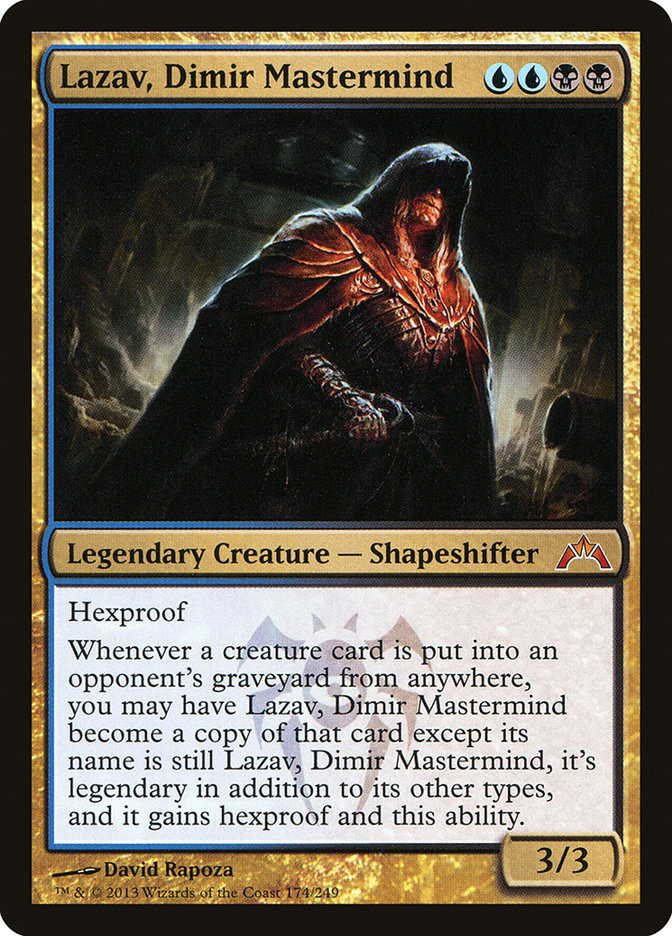 Taylor Day: "Late game when it was just Ian, Rob and myself, I played my Lazav, Dimir Mastermind and passed turn. Rob’s turn was next, and he cast Wrexial of the Risen Deep. I countered this with Induced Paranoia, and Lazav became Wrexial. Rob was forced to mill cards due to Induced Paranoia’s other effect, and he milled Enter the Infinite. When my turn came back around, I swung at Rob with Lazav (who was shapeshifted as Wrexial) and did combat damage, which allowed me to cast an instant or sorcery from his graveyard.

I cast Enter the Infinite and had just enough mana to cast Omniscience (which I got from Enter the Infinite). I then dropped Laboratory Maniac, which allows me to win if I can’t draw any cards, and then dropped Jace Beleren. I used his ability to draw the final card and played Temporal Mastery. I then passed my turn and took my extra turn. I was not able to draw any cards and won the game due the Laboratory Maniac’s win condition."

While I had to grit my teeth at the Time Walk effect just a little bit, I have to admit this was a crazy epic play in true Dimir Mastermind form! I asked Taylor to share his deck, so any Lazav, Dimir Mastermind fans be sure to check it out:

Taylor Day:  "My Secret Agent Lazav deck has a lot of graveyard fun. I included a lot of big mill cards to make the potential of my deck skyrocket early on even though it’s made more for late-game play. A decent amount of counterspells were also included to not only protect myself but to counter big momentum swinging creatures and spells that can be used with Lazav’s ability and with other graveyard-oriented cards. It includes an interesting win condition as well with Laboratory Maniac."

Taylor got to pick one of the remaining sweet Kamigawa Dragon legend alters done by MJ Scott (as shown near the bottom of my column The Hero’s Journey). Kokusho, the Evening Star and Keiga, the Tide Star had already been claimed, so Taylor put dibs on Yosei, the Morning Star.

Before I go, I want to share with you two sweet alters that I recently won in giveaways; perhaps my birthday tilted some luck in my favor? First up is this sweet alter by my good friend MJ Scott (who did those Kamigawa Dragon prizes) of www.moxymtg.com: 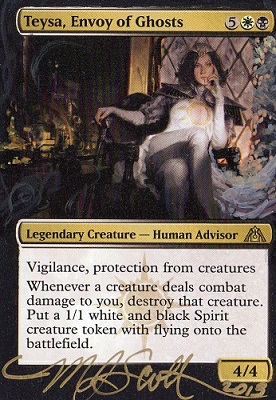 Teysa’s got a room with a view quite befitting the "Envy of Ghosts." I suppose I need to get cracking on building a Teysa, Envoy of Ghosts Commander deck now…

Next up is this iconic Star Wars scene inspired by the colors on the new split card Turn // Burn altered by Jiezl Yang. Check out her Facebook page Noodles and Doodles: 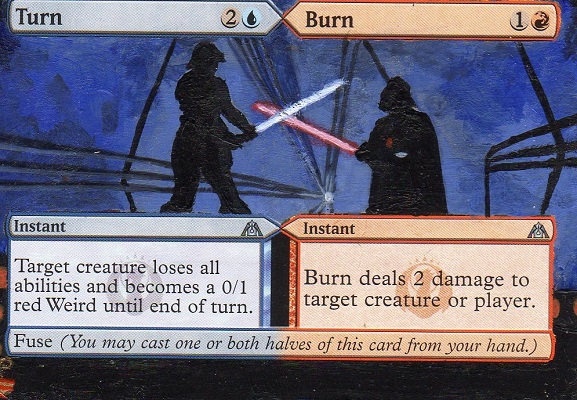 This of course would fit right in my roommate Chuck’s Niv-Mizzet deck, but I’m going to hang on to it for now and see if I can fit it into one of my Commander decks. If some card in the Reaper King deck doesn’t pull its weight, here’s a fine looking card just waiting for a spot!

Hope you all have a great weekend! I’m picking up the kids Sunday morning and heading down to the Outer Banks of North Carolina to visit with my mom and stepdad for a few days rest and relaxation. Ahhh, summer vacation…