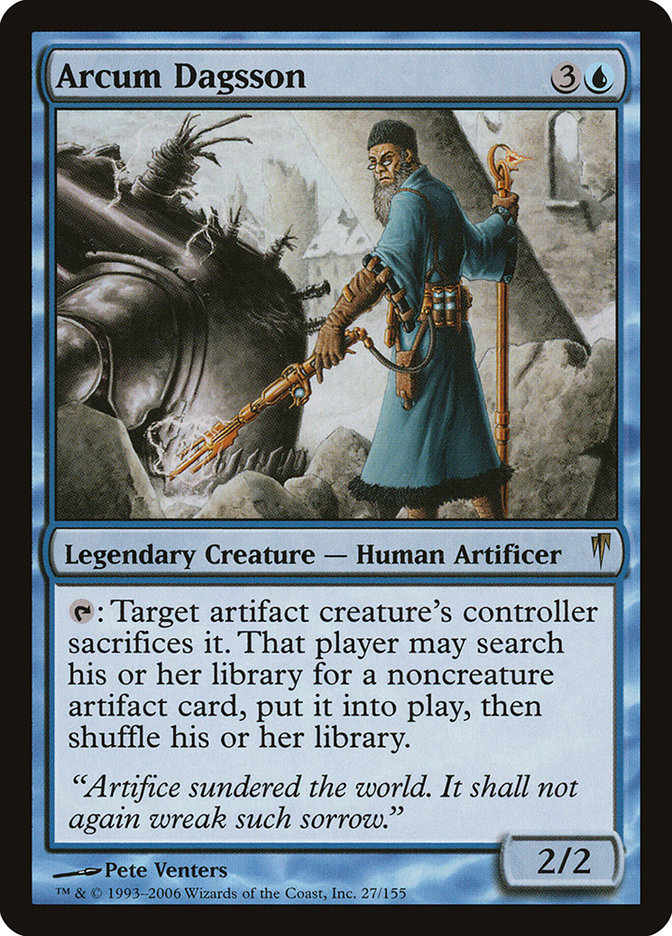 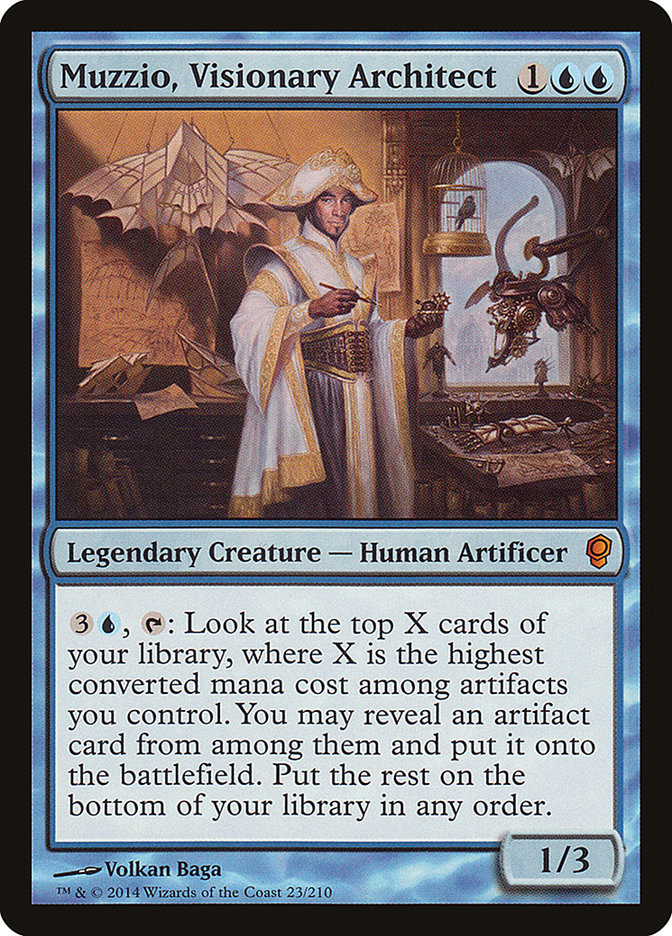 Mono-blue legendary creatures that care about artifacts aren’t new. Revealing your Commander as Arcum Dagsson pretty much set all your opponents on high alert that crazy artifact shenanigans were afoot. The newer card Muzzio, Visionary Architect is a little less insane but still incredibly powerful. If you’re looking for something to compete at the most cut-throat tables, Kaladesh‘s Padeem, Consul of Innovation isn’t likely to shake you from one of its two artificer predecessors. But if you want to tone things down a bit and just settle into some fun back and forth, Padeem offers a pretty good alternative. 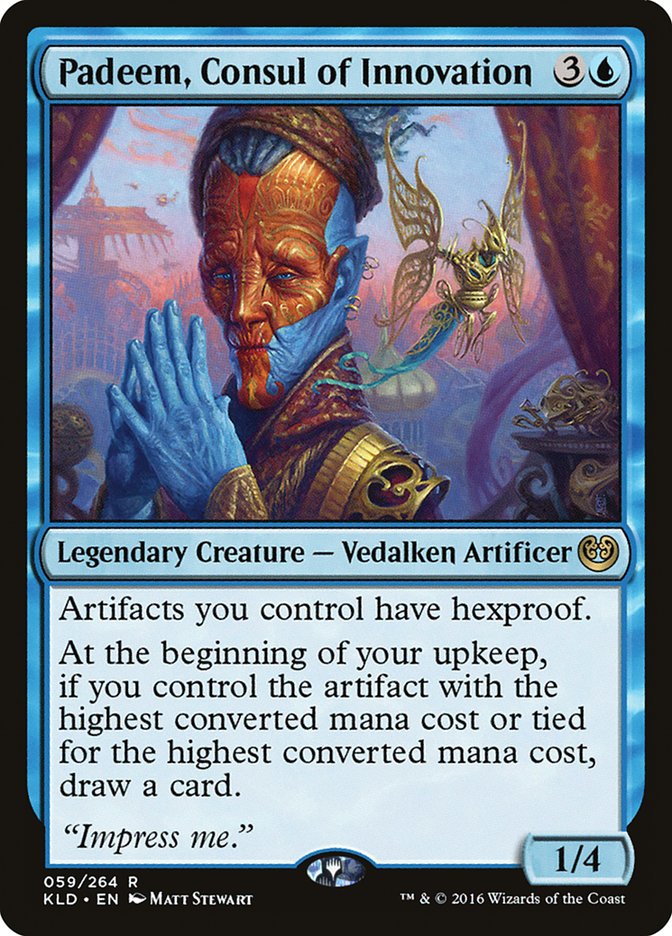 First though, a tip of the hat to Patrick Chapin and his very successful branding efforts. I can’t look at Padeem’s title without thinking of “The Innovator” Chapin, and the song he did with Tha Gatherin’, “Innovate.” I can’t help but wonder if Patrick might be tempted to build his very own Padeem, Consul of Innovation Commander deck?

So let’s take a look at Padeem, Consul of Innovation. It very kindly gives all your artifacts hexproof, which is quite handy for safeguarding all the impressive artifacts that you’ll be gathering under its watchful eye. And if you happen to control the most expensive (best) artifact on the battlefield each upkeep, it awards a sweet prize of a card off the top of your library. What’s not to love? Padeem is very generous if impressed.

The first order of business is to help Padeem join the artifact club. If you make it an artifact then it gives itself hexproof, which is pretty sweet. The first ones I want are those that make it an artifact more-or-less permanently: Ashnod’s Transmogrant, Mycosynth Lattice, and, once equipped, Silverskin Armor. Liquimetal Coating is a stop-gap measure that can negate one targeted removal per turn for Padeem or any non-artifact creature for no mana, just tapping. Neurok Transmuter can do it multiple times for the cost of a blue mana.

Padeem is an Artificer and makes good use of Inventor’s Goggles, but so many blue “artifacts matter” creatures are Artificers as well, and any of them can pick up those Goggles for free. I love that Chief Engineer and Grand Architect can power out expensive artifacts for Padeem to be impressed with so it can feed you free cards.

The fact that some of these are also artifact creatures is such great synergy with Padeem. Master Transmuter can do some crazy things if it’s allowed to stay on the battlefield untouched and Padeem helps ensure that it can.

How cool that Whirler Rogue is both a Rogue and an Artificer? Its triggered and activated abilities are good enough to make the cut anyway, but being a member of the Goggle Guild is icing on the cake.

In addition to the Artificers, we have a fair number of other cards we can add to the mix that care about artifacts. Thada Adel, Acquisitor does good field work gathering some sweet artifacts from rare and unusual sources. Master of Etherium is a scary Modern Affinity staple that can be even scarier in a Padeem deck giving it hexproof. Whirler Rogue making sure we can get an attack through unblocked fuels the triggered abilities of Thopter Spy Network and Sharding Sphinx.

I’m excited to have pre-spark Karn, Silver Golem on the team. He’s a very, very impressive artifact indeed. Itcan pair up with Liquimetal Coating to do fun things like attack with a 4/4 Thopter Spy Network—which could trigger its draw ability itself! You can also make a troublesome land like Maze of Ith or Gaea’s Cradle into an artifact, and then have Karn make it a 0/0 artifact creature. And who needs Crew for your Vehicles when Karn can just make them creatures for one mana?

Inventors’ Fair can give us a steady trickle of life, but Tomb of the Spirit Dragon is going to be huge for us. Impressively huge. With a little Liquimetal Coating, it can even be an artifact.

Between the artifact Artificers and the artifact-matters artifacts, we already have a fair number of artifact creatures which are particularly nice with Padeem’s hexproof. But why stop there? We can certainly pepper in some more good artifacts to really take it up a notch. Hangarback Walker, Phyrexian Metamorph and Solemn Simulacrum are just high-quality cards we’d likely want anyway. Spire Golem, Metalwork Colossus and Mycosynth Golem are high-cost artifacts that we can likely get onto the battlefield much earlier than normal, which helps ensure we have the highest cost artifact on the battlefield when it comes time for Padeem to hand out the gift for being impressed.

Inkmoth Nexus gives us an additional way besides Commander damage to deal with someone who has gained an insane amount of life, and the fact that it turns into an artifact creature that gains hexproof from Padeem is pretty nuts.

Okay, in case we aren’t impressive enough already, let’s pepper in even more artifacts! I debated whether to go with the Module cycle, since I wasn’t going to be playing with any tutor effects, but decided to go ahead anyway. They’re each pretty good individually in this sort of deck, and if you happen to draw into the machine – and Padeem is hopefully helping up draw a bunch of cards – then that is certainly impressive. Since I included the Modules, I went ahead and tapped a few more artifacts where Energy matters, Deadlock Trap and Aetherworks Marvel.

Journeyer’s Kite and Scroll Rack make an impressive combination you can enjoy in any color of deck, but having both gain hexproof takes it up to extraordinary. Eldrazi Monument gets to be hexproof from Padeem while giving Padeem indestructible; I’d say that makes for a remarkable partnership.

Salvaging Station lets us turn each creature dying into a trigger to retrieve some key cheap artifacts, namely Welding Jar, Ashnod’s Transmogrant, and Expedition Map, but also any other artifacts like Skullclamp or Sol Ring that unimpressed opponents might have broken along the way.

I’m a little sad that Padeem isn’t big enough on its own to crew Skysovereign, Consul Flagship. Maybe it needs to pick up that Bonehoard first?

And then there’s Spine of Ish Sah, which comes down to break whatever ails you. And when it dies, it comes back to do it again. And again. And again. This is a card I sometimes forget about, but whenever I remember to play it, it does such good work. Especially if you include ways (Trading Post) to destroy it yourself (Phyrexia’s Core).

Since we’re playing blue and we’re drawing cards, we don’t want to forget about blue’s biggest strength: counterspells. I don’t generally like counterspells in Commander, but there certainly are going to be things your opponents cast that you’ll want to stop; Akroma’s Vengeance, I’m looking at you. I like Arcane Denial and Dream Fracture because they stop the offending spell while giving your opponent a consolation prize for you playing a mean blue spell and saying no. Cryptic Command isn’t nice, but it’s too potent a tool for a mono-blue deck to not play if you own one.

Rapid Hybridization and Pongify are cheap instants you play because sometimes there are creatures out there that are so much worse for you than the 3/3 green creature token they get in return. Besides, giving your opponent an Ape or a Frog Lizard token is funny, right? Right?

Okay, so here’s what I’ve got cooked up:

Are you impressed? What have I overlooked that Padeem would want to see? How would you go about building your own deck around Padeem, Consul of Innovation?

If you’re just curious about the format, building your first deck, or trying to take your Commander deck ups a notch, here are some handy links: