My intention this week was to write a little more about my Red/Blue/Green Monsters deck with tweaks from Journey into Nyx. I took it to battle at Friday
Night Magic last week, where they added a “win-a-box” to the prize pool to draw more people. A pretty good crowd mustered out and I was looking forward to
putting the deck through its paces.

I won Round 1 against a mildly terrifying Boros Burn deck with Dictate of the Twin Gods in three close games that left me feeling grill-kissed and craving
some Sauer’s BBQ Sauce. The next two rounds I was matched up against other midrange decks and both matches ended up drawing each time, which was a bit
frustrating.

The fourth round I played against a Junk midrange deck and managed to sweep him both games, which was fortunate since we likely didn’t have time to finish
a third game. I was rather tired and a little rattled at the thought of possibly getting another draw-remember my nightmare from GP Richmond? So I quickly filled out
the results slip, got my opponent to scribble his signature, and turned it in.

Pairings for Round 5 went up…and my opponent is paired at the top table, and I’m paired considerably lower. I didn’t really notice because I was paired
against my friend Kevin and we begin a friendly banter as we shuffled up, but my opponent from last round called out to the shop owner and said he thought
our match may have been recorded wrong. The shop owner pulled out the results slip and shows it to us-sure enough, I’d written the match 0-2 instead of 2-0
and both of us signed it without noticing the error. Since it was signed, turned in, and the pairings already done, there’s no going back. I felt like a
total bonehead since it was my own damn fault-I’ve never done that before, but considering my mental state it doesn’t surprise me. My opponent from the
previous round felt terrible, and ends up hooking me up with some packs to compensate, so kudos to Stephen Ownby for being super-cool even though it was my
mistake.

So I played against Kevin and his Mono-Blue devotion deck. I crushed him the last time we played, so this time he got his revenge. The first game went back
and forth for a while but eventually my large monsters took it down. The second game, he got an early beatdown draw and tempo’ed me with bounce to deal too
much damage before I could stabilize. The third game was just dumb-Turn 1 Cloudfin Raptor, Turn 2 Tidebinder Mage, Turn 3 Tidebinder Mage and Hypnotic
Siren, and then Master of Waves with another Tidebinder Mage in hand in case I happened to have any other potential blocker.

Oof. Bad beats. The deck is still good, but it still needs a little work. I’ll get back to you on it.

So I had to come up with a plan B. Luckily, something popped up that inspired me. Perhaps you’ve seen it? 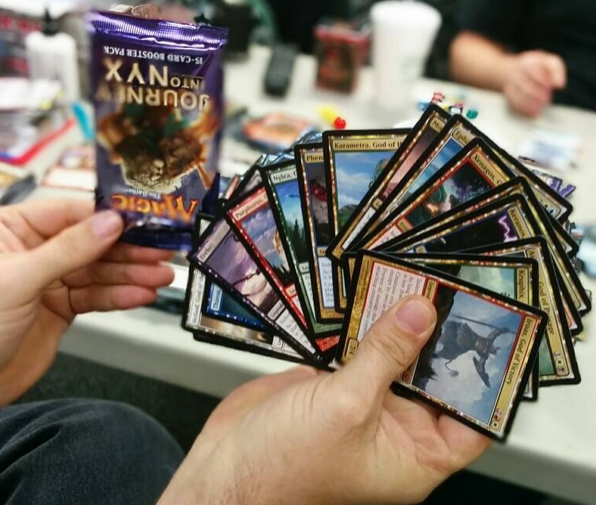 Apparently Wizards has randomly slipped a few “God Packs” into booster boxes of Journey into Nyx that contained all fifteen of the Gods from Theros block.
This got me thinking. What if I opened one of these booster packs? What would I do with one of each of the Gods?

Well, I’d build a Commander deck with them, of course! I’d already been kicking around the idea of trying to build a five-color enchantment deck featuring
many of the constellation cards, and since the Gods are each very durable enchantments, that seemed like something worth trying, right?

I also decided to slap on a deckbuilding restriction: I’m going to restrict my mana base and most of the other cards in the deck to a reasonable cost
level. I’m blessed to actually have a fair number of dual lands and shock lands at my disposal for building Commander decks around, but Wizards R&D has
done a lot of good work making cheaper color-fixing available for multicolor decks. What might a five-color mana base look like with no duals and no
shocks, and could it work? Let’s see.

The inspiration and heartbeat of the deck. Some of the individual Gods have abilities that aren’t really going to be all that exciting in multiplayer,
especially not in decks specifically focused around abusing their abilities. I’m thinking Iroas, God of Victory; Mogis, God of Slaughter; and Phenax, God
of Deception. Still, they’re indestructible enchantments that will sometimes become creatures that can beat down and the impetus for the deck, so they are
all in the deck. Some thoughts on specific Gods:

Athreos, God of Passage: when a creature dies, you choose which opponent chooses between paying three life or getting your creature back. That means you
can pick on the player who has the lowest life, or if you’ve got a temporary ally helping to defeat the table’s Big Bad, that player can choose to help you
out.

Erebos, God of the Dead: none of your opponents can gain life. This will not be a crowd pleaser…mental note to not play this unless feeling froggy.

Heliod, God of the Sun: this guy makes enchantment creatures which will trigger all sorts of goodies, so we’ll want plenty of white mana lying around.

Phenax, God of Deception: can work nicely for self-milling if I want to make snakes with Pharika.

The gods are obviously best if woken up, so I wanted to try and find cards that can spread around a lot of devotion. I thought the “blade” cycle from Alara
Reborn were nifty to include since each one provides two devotion across three colors, improving the odds of having the right devotion count for the right
Gods. I replaced the Naya blade with Trace of Abundance, since it’s a little less vulnerable to removal and also fixes mana while providing the same
devotion benefits. Mayael the Anima is a three-color permanent for devotion with special abilities I felt played well with the rest of the cards in the
deck. I picked some five-color permanents that are guaranteed to provide one or two points of devotion to every God, including choosing Karona, the False
God as my Commander. She certainly perfectly fits the “God” theme of the deck, even if I want to be careful and only play her when it benefits me more than
my opponents.

There are a few more constellation cards out there, but I think these are the best for Commander. The heavy colored mana requirements of Underworld
Coinsmith’s activated ability make it less good in this deck than most, but the lifegain will prove to be quite helpful. I admit to having dreams about
casting Replenish and setting off a cavalcade of constellation triggers!

The usual Enchantress deck suspects; I just love how nice it’s going to be having such a large number of enchantments that are going to be immune to the
usual mass removal spells that tend to crush Enchantress dreams. Auratog’s in here to help the Gods dodge exile or tuck effects, or to boost Replenish with
enchantments in play as well as enchantments in the graveyard…or to just get huge on the off chance he can get in and kill someone. I really like that
Academy Rector can actually fetch up a creature now in our post-Theros age! Riptide Chimera (and Mana Bloom too) can keep a steady stream of constellation
and enchantress triggers, make Angels from Sigil of the Empty Throne, cantrip Abundant Growth, trigger Karametra, God of Harvests if you bounce enchantment
creatures. All sorts of fun times!

Outside of the land base and Birds of Paradise, we’re lucky that there is plenty of enchantment-based mana fixing that plays right into our themes. I’d
like to squeeze Sylvan Caryatid in here, but I don’t see a two-drop I want to cut just yet. If the ‘blades don’t work out then we’ve got some room at two
mana. If your playgroup is small and doesn’t include many Islands, then Carpet of Flowers is a blank so that can be cut, but if that’s not the case, Carpet
is pretty awesome. Keep in mind the errata on the card reads “At the beginning of each of your main phases, if you haven’t added mana to your mana pool
with this ability this turn, you may add up to X mana of any one color to your mana pool, where X is the number of Islands target opponent controls.” So if
you draw it, you can play it during your first main phase, declare your attack step (even if you don’t plan to attack), and then at the beginning of your
second main phase go ahead and draw mana out of it the same turn you cast it.

I built the land base with a fair number of basic land fetchers, with the idea of assembling a complete Domain (all five basic land types) as soon as
possible. This will enable all the “check lands” to come into play untapped and ease up on having so many enters-the-battlefield tapped lands. I’ve kept
the mana curve relatively low to try and mitigate that causing the deck issues on mana development. Obviously, if you have more expensive lands (dual
lands, shock lands, fetch lands) they can improve your mana performance but I think the deck will operate fine with this configuration.

Speaking of this configuration, here’s my decklist:

If you have a Serra’s Sanctum it obviously belongs in the deck. I didn’t include it here because it’s not exactly cheap. Same thing with Greater Auramancy.
If you’ve got a Survival of the Fittest, it can do some good work too, pitching Gods without devotion to fetch up those who do. Sylvan Library isn’t cheap
either, but I think it does a lot of work in the deck with all the searching available.

Obviously each of the Gods can be much more powerful as the Commander of their own deck, so much so that cards like Deglamer and Unravel the Aether have
become must-haves in decks. I’m intrigued by the notion of overloading that removal, of having three, four, five or more Gods in play all at once doing
what they do. Do you think a deck like this is the best way to see how that plays out, or is there another approach that might be better?