Where Has Selvala Been All My Life?

Sadly, a week’s gone by, and I still haven’t had a chance to play any Conspiracy. I had every intention of playing last Friday, but a close family member
had a medical emergency that called me out of town from Thursday through Saturday night. Everything went okay thank goodness. I’m a little worried about
making plans this Friday, but… fingers crossed I’ll finally be able to play some Conspiracy this week because man, I want to get my mitts on some
Conspiracy cards for Commander! Not only do I want Uncle Grenzo (see last week’s column), but I also want – no, I need – Selvala, Explorer Returned in my
life! So glad she’s returned… but where’s she been? Kicking butt and chewing bubble gum, I’ve no doubt.

I really love the Parley ability. It’s got great color-pie pedigree-green had a long history of ruining perfectly good cards by allowing every player to
share in the love. Eladamri’s Vineyard, Elephant Resurgence, Clear the Land, Game Preserve, Greener Pastures, Shizuko, Caller of Autumn, Kamahl’s Summons,
Ley Line, Nature’s Resurgence… you get the picture. Of course, these sorts of cards now find new life in “group hug” style Commander decks, and I’ve no
doubt that the Parley cards will as well. But I think the Parley cards are strong enough to see play in decks outside of the warm and fuzzy realm; after
all, drawing extra cards isn’t always a benefit in Magic. 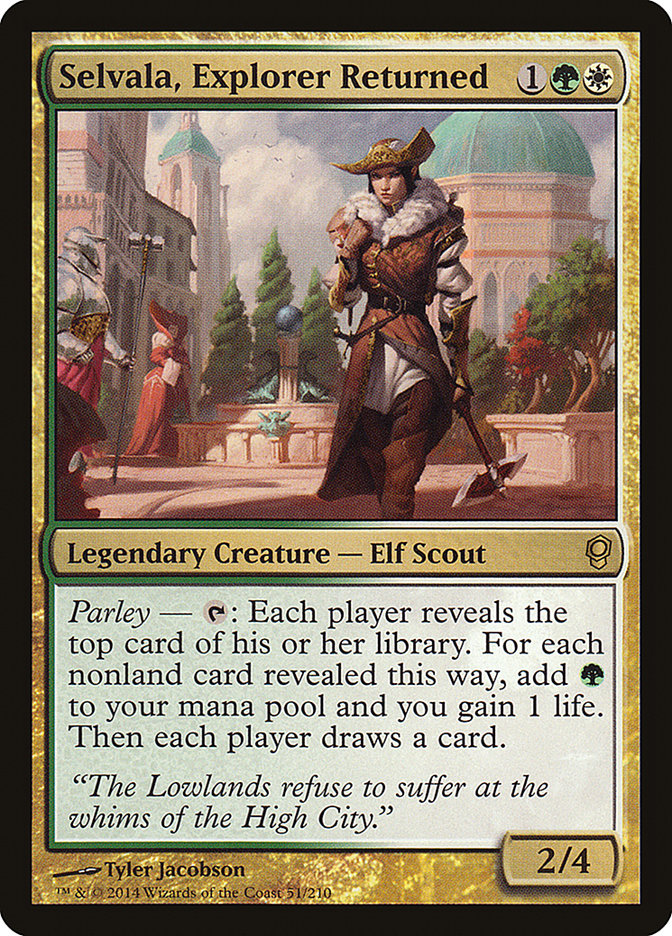 On a side note… when I hear the word parley my mind turns to a movie I’ve seen a few times recently on cable called Silver Linings Playbook. I avoided the
movie in the theater because the previews made me think it was a rather sappy love story, but turns out the movie is very enjoyable. Of course, the
highlight of the movie is getting to see quite a few scenes of Jennifer Lawrence in dance tights (spoiler alert, she looks really good in dance
tights), but the acting and the storyline were engaging as well. Anyway, a big part of the movie involves something the characters called a “parley” which
are two bets tied together and you’ve got to win both bets to win, and if you lose, either one you lose the whole thing. Well, it turns out that the bet
“parley” is actually spelled parlay. Two words that sound the same but mean different things… gotta love the English language, right? Well, so long as the
English language brings us movies with Jennifer Lawrence in tights I think we can muddle through.

Okay, enough about another woman. Right now, we need to focus on our lovely elf scout Selvala, Explorer Returned. What I love about her parley ability is
that it costs no mana to activate, and will instead net you mana unless you get really unlucky. So on a base level, you get to draw a card and then have
some extra mana to cast something from your hand. Sure, everyone else is drawing a card too, but you get to control when you draw the card, and you’re the
one getting the mana to play it.

One avenue I was interested in exploring is how to turn Selvala’s ability into a win condition. Was there something like Mind Over Matter that I could pull
off in white and green? The closest I could come up with was Umbral Mantle and Sword of the Paruns; so long as Selvala’s parley hit three non-land cards
you’d have enough mana to untap her and do it again. The more people in the game the more chance you have of being able to “go off” but even if you’re only
averaging two mana per tap you can always add an extra mana you’ve got laying around to the mix to keep going. Green is the color of mana acceleration so
it should be pretty easy to add ways to make sure you’ve got plenty of mana to the deck. Since you’re drawing cards Exploration seems like a good add, and
since everyone else is drawing cards too, then Burgeoning is a slam dunk. Luckily we’re able to play white, so we can make use of white cards to ensure we
get the equipment reliably (Quest for the Holy Relic, Stoneforge Mystic, Stonehewer Giant). Speaking of equipment, I briefly considered Illusionist’s
Bracers, figuring I could copy her activated ability and double the draw and the mana, but then my judge friend pointed out that the Bracers will only copy
non-mana abilities, and Selvala’s parley is a mana ability.

If everyone is drawing cards in equal measures, you need some way to restock your own library, so naturally I reached for our good buddy Kozilek, Butcher
of Truth. No offense to Ulamog and his Infinite Gyre, but I want an Eldrazi titan that can die so the graveyard trigger can happen, and Kozy Butt fits the
bill. Mistveil Plains is a backup plan to restock your library, and since it’s a Plains card you can even fetch it up.

To promote the death by drawing plan, I’ve included additional ways to untap Selvala: Seeker of Skybreak, Thousand-Year Elixir, and Wirewood Lodge.
Reveille Squad is a nice way to turn any attacks headed your way into an untap. Thornbite Staff gives you a free untap whenever a creature dies. Seedborn
Muse and Patron of the Orochi give you extra untaps during everyone else’s turns.

BIG HANDS I KNOW YOU’RE THE ONE

One of my favorite old school cards is Storm Seeker, and I’ve got a copy of the original printing in Legends. It was such a badass looking card, and was
such a great way to punish those greedy blue mages that would tap out to draw a bunch of cards at instant speed. The card sits in my box of Commander
goodies and I always look at it and consider adding it to new decks as I build them, and sometimes it makes it in… but then I play games where I draw it
but none of my opponents have more than a few cards in hand, and it’s just a dud. This deck? Well, this deck is the perfect home for that bad boy. Storm
Seeker – apply directly to the forehead! Multani, Maro-Sorcerer is another way to “punish” opponents who have hands overflowing with cards.

Of course, our opponents aren’t the only players who will have large hands; with any luck our own hand will be flush with cards too. Empyrial Plate
translates every card in your hand into +1/+1 on the equipped creature, so even the mildest of the meek can get scary in a hurry. Psychosis Crawler
translates each card you draw into pain for all your opponents, and that can add up quickly (so help it along with Memory Jar). How about Greater Good? The
discard and sacrifice are both great ways to make sure Kozy Butt hits the graveyard and shuffles everything back into your deck to keep your library fully
stocked.

While you’re giving your opponents cards you’re also getting the chance to see them, which gives some added utility to a card like Voidstone Gargoyle in
case you see a card you definitely do not want to see played.

Okay, let’s see what I’ve cooked up for a Selvala, Explorer Returned deck:

One thing I was a bit worried about was getting crushed by all the extra cards I was feeding my opponents, so I added in some defensive measures outside of
the usual pinpoint and mass removal. Constant Mists and Spike Weaver buy a ton of time against mass assault while Invulnerability, Maze of Ith, and Kor
Haven can negate individual sources of big damage.

A nice setup that’s possible in this deck is Dauntless Escort, Sun Titan, and Novablast Wurm. Sacrifice the Escort to make your team indestructible, attack
with Sun Titan and Novablast Wurm and whatever else you have around, kill everyone else’s creatures with Novablast Wurm’s trigger and get back Dauntless
Escort with Sun Titan’s trigger. If you’ve also got Adarkar Valkyrie out there you can nab one of your opponent’s creatures to come join the winning team.
Yeah, if you’ve got this setup you don’t really need to worry about decking everyone with Selvala, but hey-you always need a strong Plan B, right?

What’s your opinion of the new legends from Conspiracy? Have you been able to pick one up and build a deck around it? I’m curious to hear what you think of
my Selvala deck and any other angles you might have cooked up!

· Doran, the Siege Tower (All My Faves in One Deck!)

· Vorel of the Hull Clade (Never Trust the Simic)

· Johan (Cat Breath of the Infinite)

· Konda, Lord of Eiganjo ( The Indestructibles)

· Mirko Vosk, Mind Drinker ( Outside My Comfort Zone with Milling
)

· Nylea, God of the Hunt ( Devoted to Green)

· Oona, Queen of the Fae (by reader request)

· Roon of the Hidden Realm ( Strolling Through Value Town)

· Ruhan of the Fomori (lots of equipment and infinite attack steps)

· Savra, Queen of the Golgari ( Demons)

· Skullbriar, the Walking Grave ( how big can it get?)