Equipment cards are staples of Commander. Creatures are cast and creatures are killed, but while they are on the battlefield, it is nice to enhance them with Equipment. It helps that Wizards of the Coast took a while to realize how powerful the new artifact type was when they first created the card type, and by the time they pulled back on the power scale, we had tons of overpowered Equipment cards to toss into any Commander deck with creatures – which is very nearly all of them.

Wizards has also printed a fair number of legendary creatures that card about Equipment or artifacts generally so that we could use one to build an Equipment-themed deck. Here are most of them:

I have built decks around many of these and they are fun to varying degrees.

I always liked Jor Kadeen, the Prevailer as a sneaky Equipment Commander because he would give all your creatures a boost in addition to anything your Equipment might be providing. Kemba, Kha Regent always felt a tad disappointing because opponents usually bent over backwards to prevent Kemba from sticking around long enough to get the trigger. Not that I blame them—who wants to face down two, three, or more free 2/2 Cat tokens each turn?

Godo, Bandit Warlord is fun because it allows you to tutor up specific pieces of Equipment, but you feel like you are losing out on many good Equipment support cards in white as a mono-red deck. Also, how many Samurai can you find in red alone?

I was thrilled when I heard that Commander 2017’s Feline Ferocity was going to have a strong Equipment theme, especially the two new legendary creatures that were not the face on the box: 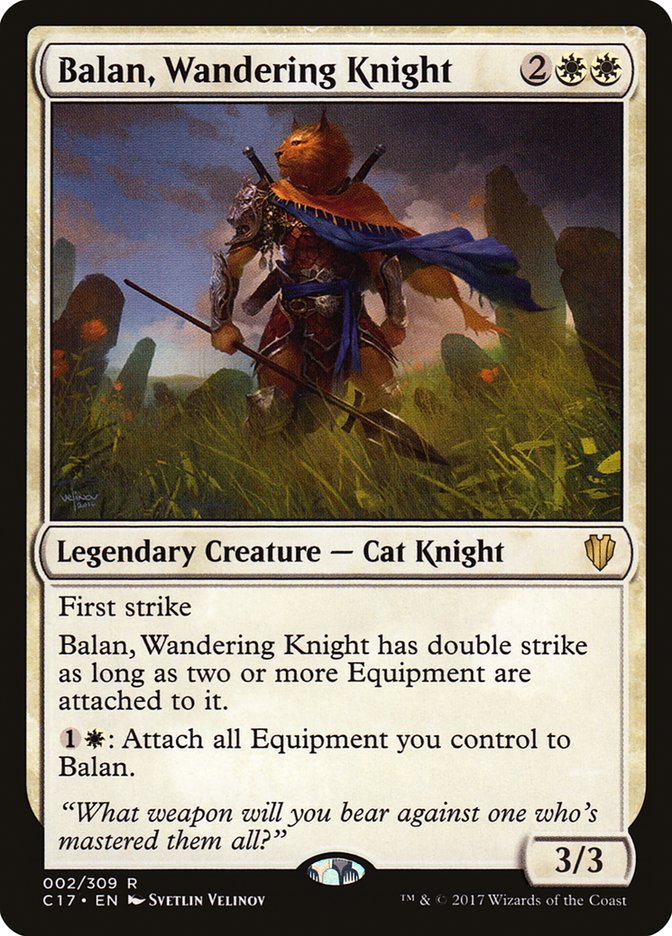 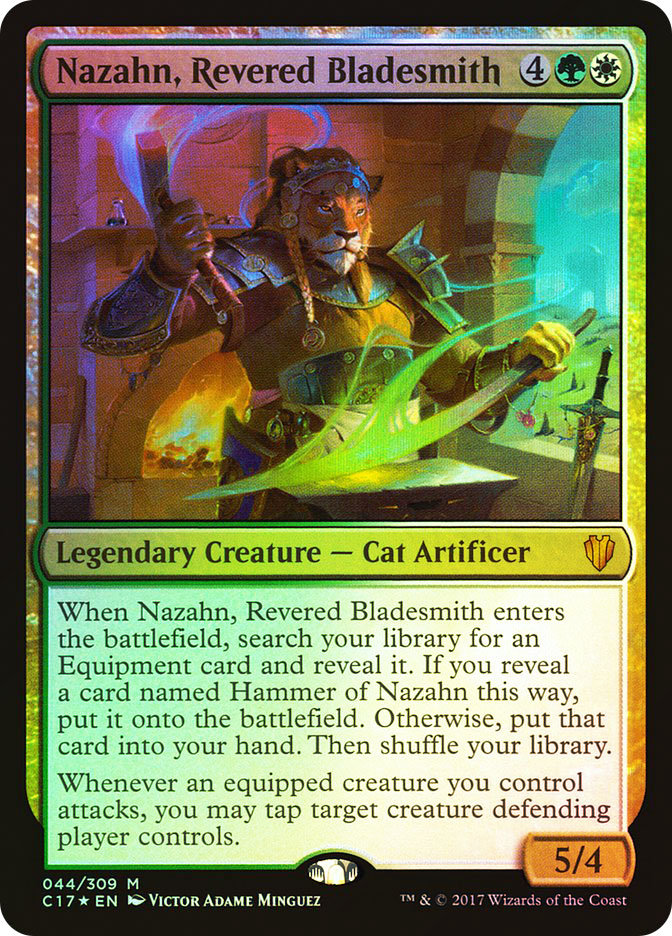 Balan, Wandering Knight is a very powerful card and can quickly “Voltron” up to lethal levels, but as a Commander choice, it locks us into mono-white and we have quite a few choices for that already. It does not feel like it brings much that is new to the table. 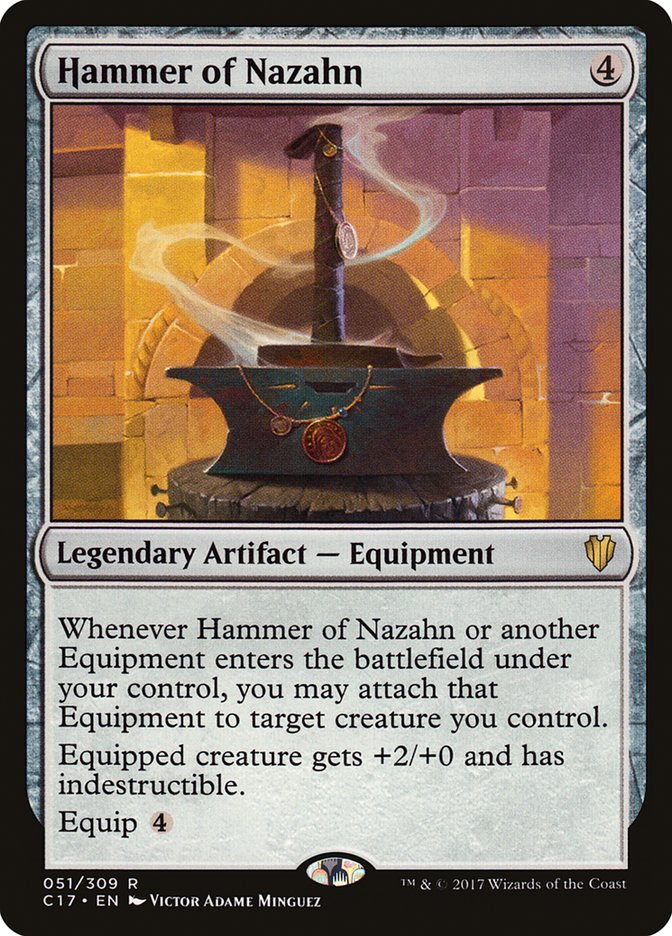 Most of the time, when you cast Nazahn, Revered Bladesmith for the first time, it’s actually going to be a 7/4 indestructible creature that lets you equip Equipment cards for free when you cast them and have your equipped creatures tapping down blockers when they attack. Now that is a heckuva deal for six mana!

It’s tempting to build a deck that’s all about powering out Nazahn quickly, protecting it, and riding it to victory through Commander damage… but if things don’t go your way, it’s pretty easy to quickly get to the point where you can’t cast your six-mana commander due to the commander tax. Besides, we are a green and white deck—there are plenty of great cards we can add to the deck that will help us win through other means. Let’s keep the strong Equipment theme that Nazahn encourages but spread out our threats and have lots of answers to things our opponents might be doing while grinding out card advantage.

First on the agenda is to select lots of good Equipment cards. Hammer of Nazahn is the all-star, but all the rest of these are fantastic too, especially if we do not have to pay the equip cost. Blade of Selves gets the nod because I anticipate including lots of great utility creatures that have enters-the-battlefield triggers, but it is even good to equip to Nazahn—while you will need to sacrifice all the copies due to the legend rule, you will still get the Nazahn trigger to search up another Equipment card for each extra opponent. Nim Deathmantle and Deathrender are some of my favorite Equipment cards in Commander in helping to gain value out of creatures dying, since that will happen so frequently in just about any game.

Ah, yes, the color identity gives us access to all the great Equipment support cards in white, with Stoneforge Mystic leading the pack. The ability to tap and put an Equipment card on the battlefield at instant speed is already quite good, but if you have a Hammer of Nazahn or Sigarda’s Aid already on the battlefield, you can equip it at instant speed. Now that’s a sweet combat trick! I love that Puresteel Paladin and Sram, Senior Edificer provide us with great card advantage engines to keep your hand gassed up.

Armory Automaton does silly things in a game of Commander and it seemed a shame not to include it here, even though there are times when you will not want all your Equipment cards to unequip from certain of your other creatures. Thankfully it is a “may” ability, so you can pick and choose.

While mana ramp is something most Commander decks employ anyway due to haymaker spells often being on the more costly end of the curve, we certainly want to make use of it here, considering that Nazahn costs six mana the first time you cast it. It is particularly awesome that green and white can make use of Krosan Verge, Myriad Landscape, and Blighted Woodland to trade in one land for two without even costing you a spell slot.

Green decks will often employ Cultivate and Kodama’s Reach for some high-quality ramp, but I decided to run Farhaven Elf and Wood Elves instead, since they will let you ramp one land and leave behind a body that can pick up a piece of Equipment, just like Solemn Simulacrum.

Traverse the Outlands can provide a gigantic surge of mana depending on what you have on the battlefield, but since we are an Equipment deck that can potentially “Voltron” a creature to impressive size, it seems like a slam-dunk easy choice for a slot.

Green and white have an endless supply of great utility creatures, which will often generate card advantage and let you grind games and keep gas in your tank. I could have stayed closer to a Cat tribal theme but decided to ditch that in favor of good stuff up and down the mana curve. Many of these are just bonkers with Blade of Selves, so I anticipate that being a piece of Equipment that gets searched up often.

I made room for Riftsweeper because I anticipate Hammer of Nazahn being a prime target for an Exile removal spell; being able to shuffle the card back into your library from exile is perfect with so many ways to search up Equipment.

Can I just tell you how much I love Alms Collector? What a great way to keep some games fair – though it can be quite evil if you combine it with Wheel of Fortune-type cards.

Of course, a Commander cannot thrive on grinding advantage alone, and thankfully we can tap into plenty of raw card advantage cards in green. Recent sets have given us some really high-quality cards such as Seasons Past, Zendikar Resurgent, Rishkar’s Expertise, and Lifecrafter’s Bestiary—basically, if you are a green deck, do not leave home without them! Then there are the classics like Sylvan Library and Greater Good.

I did dip into white for Thraben Inspector, which gives incredible value in a one-mana spell. Having a body that can hit the battlefield, pick up a piece of Equipment, and start attacking early will be quite helpful.

White and green give us some great removal options, from pinpoint creature removal like Swords to Plowshares to mass removal like Wrath of God. Sylvan Reclamation and Return to Dust are prime exile spells for problem artifacts or enchantments. Krosan Grip’s split second ability can break up combos that are otherwise unstoppable.

For the last few slots, I choose the incredibly overpowered Seedborn Muse to provide pseudo-vigilance for our creatures and let us tap out to cast Equipment cards and pay equip costs and still have mana during other players’ turns to cast reactive spells. Heroic Intervention and Teferi’s Protection provide great emergency buttons to help us out of an otherwise bad turn of events.

I really like this list quite a bit and think it can rumble with just about any other deck. What do you think? How would you do things differently? Are there any must-have cards that I overlooked?