Another week and the Dominaria hits keep coming! I love that there are so many legendary creatures that they even made some uncommon, and many of them are quite good. This week I wanted to share a deck I cooked up revolving around the newest sad Vampire to crew the Weatherlight, Arvad the Cursed! 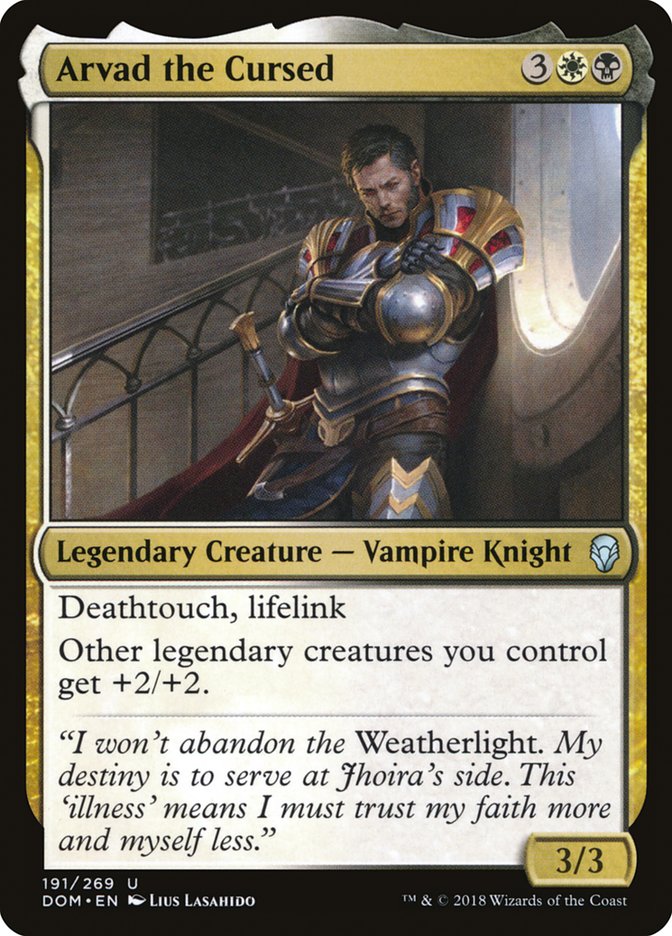 Arvad has a sweet text box that gives us some ideas on how to build our deck, but I think Arvad also has a secret super-power: he’s not the sort of Commander that sets off alarm bells from your opponents.

When a player reveals their Commander and it’s something like Muldrotha, the Gravetide or Uril, the Mistalker or Edgar Markov, the opponents know they’re in for a scary game from the start, and if they aren’t vigilant, things will get out of hand in a hurry.

Arvad isn’t blatantly scary. A 3/3 body isn’t particularly sizeable, especially at five mana, and having lifelink isn’t going to raise eyebrows. Deathtouch means that people won’t be particularly interested in blocking, and the size means players can take quite a few hits before Commander damage becomes a concern. A lightning rod, Arvad is not. Which is great, right? Sometimes it’s great to fly under the radar when your opponents are doing threat evaluation.

Okay, so the more legendary creatures you have in your deck, the better Arvad will be. Let’s go ahead and lean hard into that by adding a bunch of cards that care about legendary creatures. Blackblade Reforged is the most exciting piece of Equipment for Commander that’s come out for a while, so exciting I ordered a whole bunch of them so I could put them in most of my Commander decks. It’s even better in this deck, since just about all my creatures will be legendary.

It’s cool that Arvad’s second block of rules text matches that of Day of Destiny. Arvad’s flavor text even mentions “destiny.” I know Day of Destiny isn’t from an expansion set on Dominaria, but I wonder if the flavor text provides any clues to Arvad’s character arc in the story? “Rise like the sun, stand like the mountain, charge like the lion, die as a hero.”

Honor-Worn Shaku will do a lot of heavy lifting too, allowing all your legendary permanents to generate mana. I love the recursive power of Teshar, Ancestor’s Apostle, and I’m glad I have a Prerelease foil to add to my deck.

Yawgmoth’s Vile Offering is a slam-dunk inclusion, but I’m a little hesitant about Urza’s Ruinous Blast. I’ve got quite a few artifacts in the deck, which count as historic spells for the cards that care about that, but they’ll get exiled by Urza’s Ruinous Blast unless they’re also legendary. What do you think?

Okay, so we’ve set the table for a whole mess of legendary creatures… which ones should we choose?

Every good Commander deck needs a source of card draw and card advantage, and we’ll certainly want some of the usual suspects here like Skullclamp, Read the Bones, and Damnable Pact. Luckily for us, there are quite a few legendary creature that can provide us with extra cards.

Tymna the Weaver is a card I too often forget about, but it works great here, since our legendary creatures will have the size under Arvad to get aggressive. I love that the card draw doesn’t require any mana and is useable turn after turn.

Ravos, Soultender “draws” a creature card from your graveyard during your upkeep and even provides an extra team boost in addition to Arvad’s. Demonlord Belzenlok will provide at least one card from the top of your library, and if you’re lucky, you might get more. Hopefully you won’t get “luckier” than your remaining life total!

White and black have no end to the number of removal spells available, but a few legendary creatures also fit the bill as “removal.” Lieutenant Kirtar provides a strong political tool, encouraging opponents’ biggest threats to attack players other than you. Ayli, Eternal Pilgrim’s deathtouch can even be removal as a chump blocker until you gain enough life to turn on her last ability, which should be relatively easy to fuel with Ayli’s middle ability, since all our creatures will be two pips bigger thanks to Arvad.

I love that Arvad could get together a little gang of Ozhov Vampires with Vona, Butcher of Magan and Vish Kal, Blood Arbiter. Maybe the two Knights could persuade Vish Kal to take up a profession?

Okay, we’ve got some legendary creatures filling some important roles in our deck, but let’s go hog-wild recruiting some other heavy hitters! I think we can even find room for a couple of one-mana legendary creatures with Isamaru, Hound of Konda and Kytheon, Hero of Akros. They can be cast early and get aggressive, but later they’ll hopefully be boosted by Arvad and some of our other legendary-creatures-matter cards.

The abilities of Lyra Dawnbringer; Elenda, the Dusk Rose; and Ghoulcaller Gisa all greatly appreciate the size boost that Arvad provides. Kokusho, the Evening Star and Yosei, the Morning Star have abilities that punish removal spells so that sometimes opponents will be loath to kill them, so I love that Arvad making them into 7/7 fliers really puts the rock on the other side of a hard place.

Legendary creatures tend to have quite a few keyword abilities, and in a deck stuffed with them, it makes sense to find room for Odric, Lunarch Marshal. Now let’s give even more reasons to share your creatures’ keyword abilities each combat!

With so many creatures in our deck, it certainly makes sense to make use of some good Equipment. I want to make sure I have Nim Deathmantle, Swiftfoot Boots, and Lightning Greaves, since I imagine quite a few of my creatures are going to draw serious attention from my opponents.

We’ll round things out with some ramp spells. I actually found the list stuffed with the other cards, so it was hard to find room for more than this. Honor-Worn Shaku certainly helps.

So, what do you think? There are certainly some great legendary creatures that ended up getting cut from my list. Which do you think I should have found room for? Is there any other angle you’d be more tempted to dig into with Arvad?

For more Dominaria Commander goodness, be sure to check out Sheldon Menery’s column The Great Dominaria Deck Update! What new cards have earned spots in Sheldon’s very large collection of Commander decks? The short answer: a lot.

The Commander VS crew churned out another video last week, featuring four Dominaria commanders squaring off against each other. Justin brings the heat with Firesong and Sunspeaker; Stephen puts down roots with Multani, Yavimaya’s Avatar; Jonathan slows everyone’s roll with Baird, Steward of Argive; and Jeremy robs his grave with Muldrotha, the Gravetide.

Also, a big reminder: #SCGCON is just a month away! I’m excited to be a part of the