When it comes to my favorite color combinations in Magic, Golgari is head and shoulders above the rest. Pun intended: this was a natural outgrowth from my initial love of green. See, way back in the 1990s when I started playing Magic, the very first pack of Magic cards I opened contained Force of Nature. 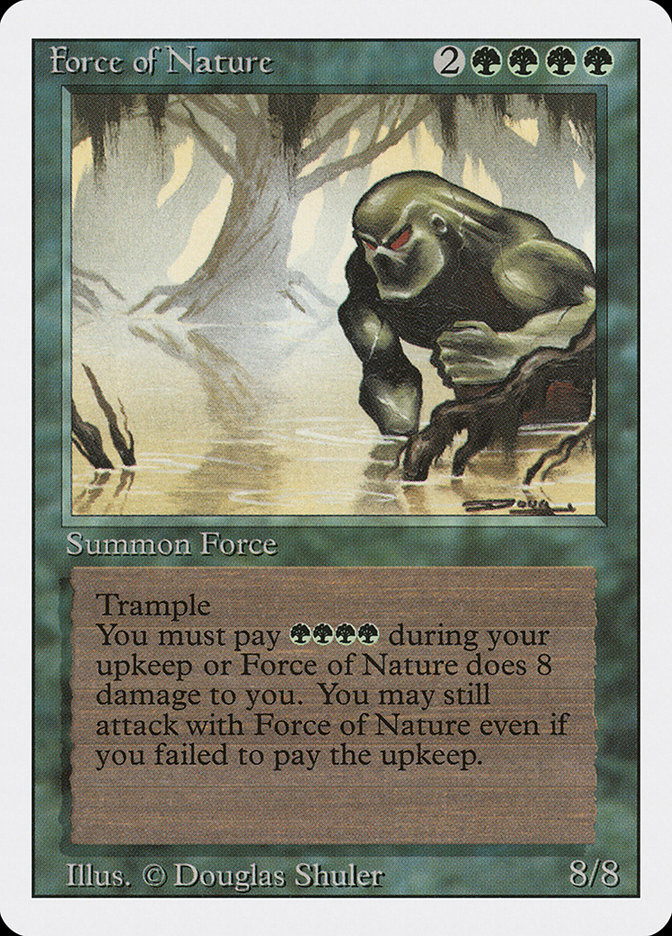 I was instantly hooked on that bad mamma jamma—it was gigantic, bigger than any of the other creatures in that pack, or in any of the other packs my friend and me opened. Eight power and toughness, plus this badass ability trample, had me convinced that green was obviously the very best color.

Flash forward a couple of years and I was singing a different tune. Yes, green had big impressive creatures, but they all too often ended up in my graveyard by Terror or some variant thereof, or countered by a blue counterspell, or, even worse, removed from the game by the ever-present Swords to Plowshares. It turns out the life gained by Swords really did not make up for removing my threat so cheaply at instant speed. It was incredibly unfair. 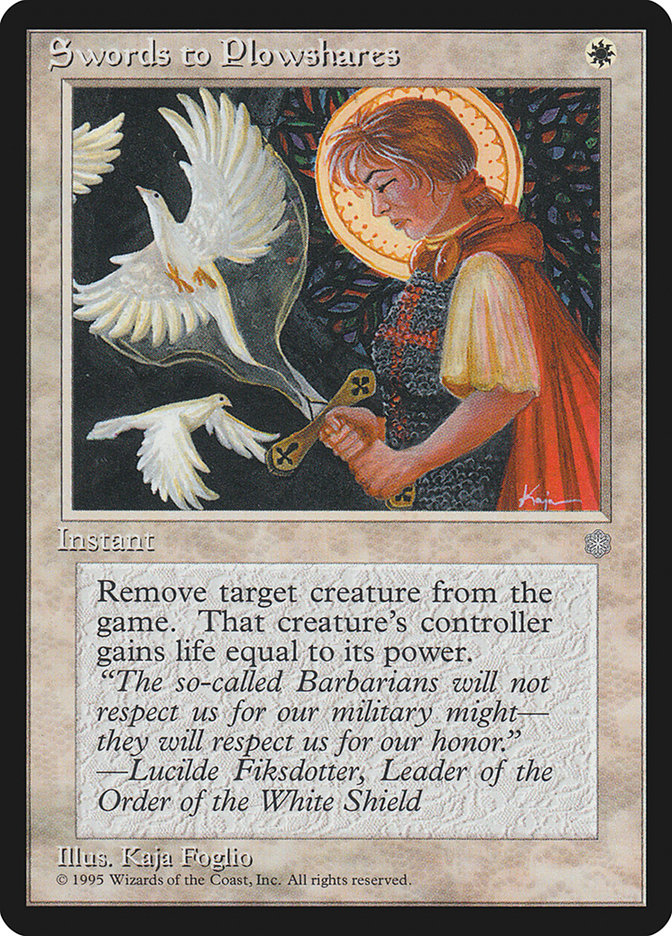 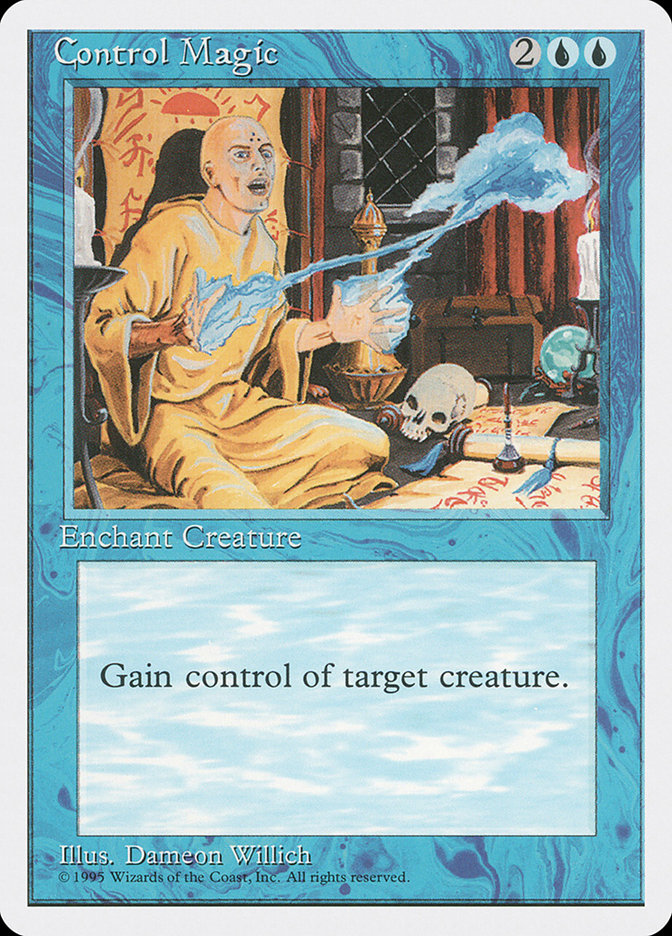 Of course, the ultimate insult was having my giant creature turned against me by something like Control Magic. When crafting the green deck I won States with in 1999, I had the newest blue Control Magic variant firmly in mind when choosing my large green creature threats because Treachery was insane. I picked Child of Gaea because the blue decks could not pay the upkeep on it, so Treachery just became a five-mana kill spell, and Deranged Hermit, since taking it with Treachery was awkward at best.

Despite winning States with a green deck, I still struggled most of the time in tournaments while playing green creatures. I remember lamenting to a friend that I wished green got some of black’s spells that got creatures back from the graveyard, since my creatures always seemed to end up there enough. My friend suggested adding those black spells to my deck so I could get my awesome green creatures back.

My mind was blown. A spark ignited within a Golgari heart I did not know existed and did not have a word for until Ravnica‘s guild came along. I started with Oath of Ghouls and then graduated to Recurring Nightmare and Living Death. Oversold Cemetery cemented the love.

Years later, my second-favorite color combination built upon that Golgari love, thanks to Doran, the Siege-Tower and the Treefolk tribe from Lorwyn block. Khans of Tarkir block gave it a name, Abzan.

Now, as a longtime green mage, my hatred of blue has burned bright for decades. But after a bunch of cool Simic cards came out, starting in Dissension and continuing over the years, it is a little disarming to find that Simic is my third-favorite color combination, especially when it comes to Commander. I have built decks around Vorel of the Hull Clade; Kaseto, Orochi Archmage; Edric, Spymaster of Trest; Ezuri, Claw of Progress; and one of my favorites, Experiment Kraj. But one Simic legendary creature I have studiously avoided is the paragon of the guild: Momir Vig, Simic Visionary. 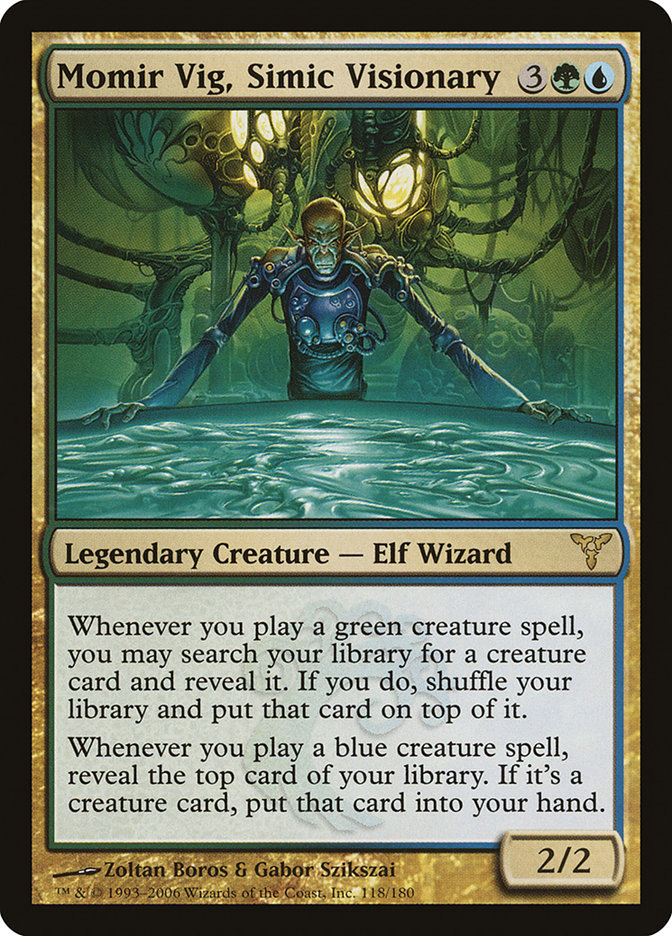 As a commander, this card is insane and comically easy to build a busted deck around. Just fill your deck with gold creatures that are green and blue and you can just chain creature after creature after creature, and not just any creature, the exact creature you want each time. Not only is that insanely powerful, but it’s a lot of deck searching and shuffling, something I try to eschew in my Commander decks for the most part. 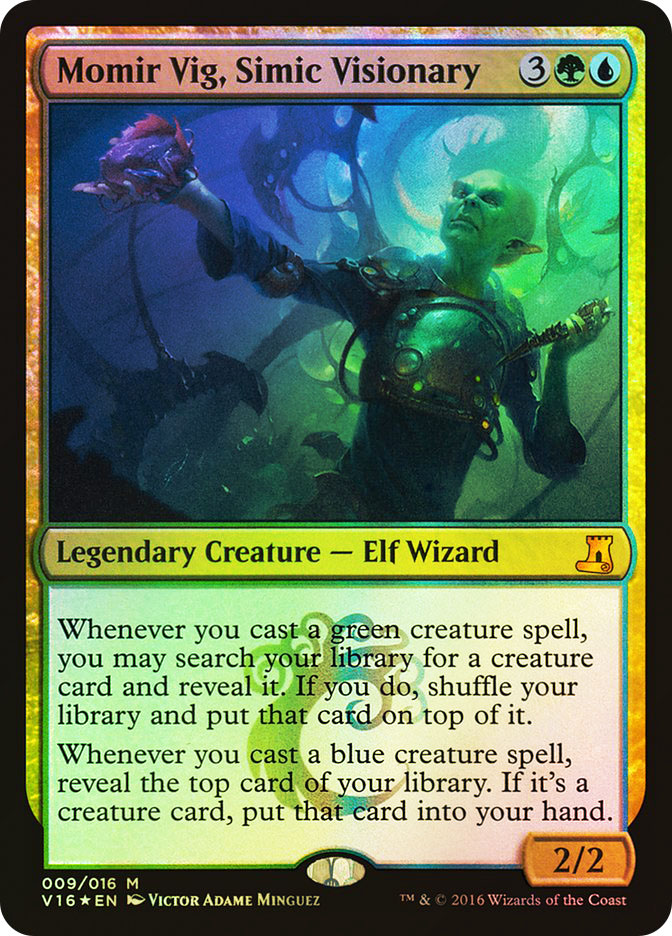 I really liked the art! Why did it have to be on a busted card I would never build a Commander deck around?

Then I thought—why not fight with one hand tied behind my back? A friendlier, powered-down Momir Vig could be fun. Looking at the triggered abilities, it’s really the one triggered off green creatures that is the source of my distaste. If I just elect to play no green creatures in my deck, I have solved my problem! There are plenty of sweet green spells I can utilize, and making all my creatures blue cantrips actually sounds like fun.

Let us do this!

Attack of the Clones

This deck gives me a perfect excuse for going all-in on my favorite blue creatures – Clones! What I love about them in Commander is the “choose your own adventure” aspect; how your games will play out will be determined in large part by what sweet creatures your opponents may be playing. This also lets your deck scale depending on the power level of the decks you are playing against—if they are playing a bunch of busted creatures, well, you are too! If they are playing with mostly fair, value-based creatures, so are you! You can also assemble an “army of commanders” by cloning everyone else’s commanders. That sounds like the very pinnacle of fun, right?

When I play a good number of Clones, I like to also include “everyone draws” cards to facilitate people drawing their sweet Clone targets and also having plenty of mana to cast those sweet spells. So I have included Mikokoro, Center of the Sea; Temple Bell; and Dictate of Kruphix to help grease the wheels.

I also added in Cloudstone Curio so I can reset my Clones in case a sweeter target comes along a little later. Sometimes love is fickle, man.

Hero to the Table

When it comes to counterspells in Commander, I follow this philosophy—use your power for good. Do not use counterspells to frustrate and stymie one particular player, but rather use those spells to stop someone from executing some dastardly plan that will crush everyone else. That way, you are not the villain. The person who was going to destroy the table is the villain, and you are the hero who stopped them!

Of course, it is always handy to have a way of stopping a spell that is going to just kill you directly, but that goes without saying. Even heroes need to look out for themselves occasionally.

Green and blue aren’t exactly the best at destroying creatures once they get on the battlefield (and maybe our Clones might help with that), but there are a few Polymorph-style spells in blue such as Pongify and Curse of the Swine that can downgrade threats into a more manageable token form. Sometimes you will be saving the whole table from a giant threat; sometimes it will just be saving yourself.

Time Stop is just one of the best utility blue spells ever printed. It’s expensive, it’s color-intensive, and sometimes it’s the only answer to the madness that’s going on. It can stop a Storm combo from resolving and it can stop a lethal attack in its tracks. That’s versatility! Don’t leave home without your Time Stop.

While it is a little sad I’m not playing some sweet, sweet green creatures – I still love you, Eternal Witness and Seedborn Muse – we can still play some awesome green spells. Exploration should combine with the raw card draw of Momir Vig and blue creatures to accelerate on mana. Heroic Intervention is fantastic protection from sweepers. Sylvan Library is obviously nuts if we play full-bore Momir Vig, since the creature search will constantly shuffle our library and give us a fresh look at cards, but I think it is still worth playing here. Evolutionary Leap is one way for us to clear off the top of our library.

I have fallen head over heels for the recent spells Seasons Past and Rishkar’s Expertise as fantastic green card advantage engines and they have been showing up in more and more of my green Commander decks. Zendikar Resurgent and Lifecrafter’s Bestiary are two additional recent and amazing cards to include.

When there is room, I like to include Deglamer and Unravel the Aether to deal with Theros block Gods that might otherwise be tough to deal with.

Since I am avoiding green, we cannot really take advantage of Momir Vig’s Elfiness, but we can certainly work in some Wizard tribal synergies. Diviner’s Wand in particular takes advantage of our card drawing engines and can potentially turn Momir Vig into a threat. Stonybrook Banneret, Sigil Tracer, and Riptide Laboratory like having Wizards around, so I have added some additional blue Wizards to the mix. Archaeomancer and Riptide Laboratory can make sure we have got one of our counterspells to play hero when needed.

We will round things out with some good stuff, including Swiftfoot Boots and Lightning Greaves to protect our relatively fragile Commander. Outside of Cloning, Basilisk Collar is the only way I have got to gain some life, and Nim Deathmantle seems even better than normal when playing a bunch of Clones.

As Foretold is a brand-new card I’m excited to try out that seems fantastic in a deck like this (assuming you draw it early enough) since you want to play your blue creatures out during your turn and be able to play reactive spells on your opponents’ turns. It has better in a deck with proliferate since that can add to the time counters on As Foretold, but I think it should still do solid work here.

What do you think of the deck? Do you think it’s cool to power down Momir Vig in this way? How would you build it differently?