I have grown to appreciate mono-colored commanders lately, in part I think due to some clear effort Wizards of the Coast has made to give mono-colored legendary creatures enough multiplayer juice. Just recently, it occurred to me that I could easily have three monored Commander decks that each plays out differently and that I would thoroughly enjoy playing: one with Feldon of the Third Path; one with Grenzo, Havoc Raiser; and one with Neheb, the Eternal. While there would be some cards in common, there would be many unique elements in each one. I really like that you can get a lot of variety even without the benefit of multiple colors. 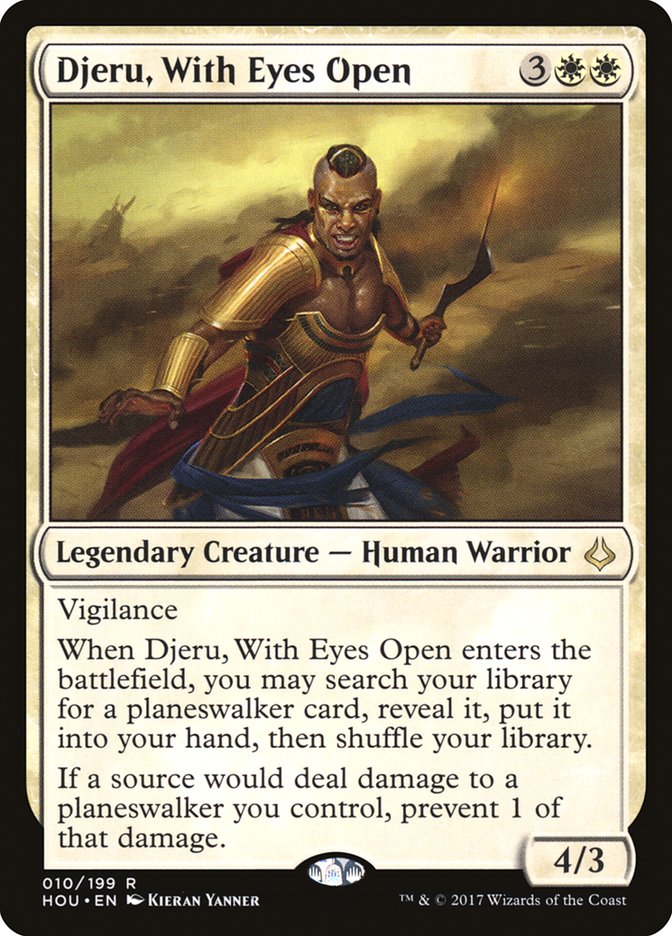 For a long while now, white has had “Equipment synergy” very prominently in its color pie slice, but it is recently apparent that Wizards added “planeswalker synergy” to white’s repertoire as well. Ajani Steadfast, Oath of Gideon, Call the Gatewatch, and Deploy the Gatewatch have filled out white’s role of searching for and boosting planeswalkers. Djeru, With Eyes Open continues that trend, and since it is a legendary creature, we can now build a mono-white Commander deck where we consistently search up various white planeswalkers to help us win the long game.

This will play out quite differently from most other mono-white Commander decks, and will be vastly different from typical “super friends” Commander decks that do degenerate things with multicolor planeswalkers and Doubling Season. Djeru, With Eyes Open is going to be less threatening that your typical planeswalker-heavy deck, and will be more about grinding out value over time. As someone who loves to grind value over time, this sounds awesome!

I briefly considered just picking single versions of each one but then rapidly decided that including just about every version was probably better, considering each one has its own unique strengths, which will make Djeru’s enters-the-battlefield trigger that much more flexible. In addition, it will increase the chances of drawing one or two planeswalkers naturally, so Djeru can fetch up another planeswalker to complement what you have already got going on.

I like that Gideon of the Trils gives you a nice silver bullet against non-interactive combo decks. I like the idea of activating Gideon, Champion of Justice after he’s gained some loyalty based on his first ability, then giving him +3/+3 and flying with Elspeth, Knight-Errant, and then giving him +1/+, first strike, vigilance and lifelink with Ajani Steadfast.

Also, you can probably rely on your opponents having at least a handful of ways to directly destroy planeswalkers, so having extras gives you greater odds of getting some to stick.

Another thing to remember is that Djeru does not have to fetch mono-white planeswalkers—we can make use of Karn Liberated and Ugin, the Spirit Dragon. Both of these give us some options for pinpoint removal or mass removal. I was a little hesitant to make use of Ugin, since I expect I would end up exiling a bunch of my own stuff if I used the sweeper ability, but I can always just use its Ghostfire ability to tick up to that ultimate, which is pretty much amazing.

Along with Ajani Steadfast, I love that Oath of Gideon provides each of our planeswalkers with additional loyalty, which certainly comes in handy in a multiplayer game. I am also happy to borrow The Chain Veil from Liliana to do awesome things with all of our own planeswalkers.

I am lucky to have two copies of Heart of Kiran… which is two copies shy of having a playset for Standard, so I am just going to toss one into my Commander deck! Djeru himself provides some protection for planeswalkers from attackers and Heart of Kiran does too.

I recently discovered Spectral Grasp for Commander, which has a similar vibe as Vow of Duty by neutralizing a threat against you and planeswalkers you control while keeping it on the Battlefield for your opponents to contend with.

Since Djeru has an ability that triggers on entering the battlefield, I figured, why not leverage that outside of having to cast Djeru? White provides plenty of “blink” effects that can both save Djeru from pinpoint removal while also letting us search up another planeswalker. We can even make use of repeatable effects from Eldrazi Displacer, Conjurer’s Closet, and the brand-new Angel of Condemnation.

If we’re going to be peppering in “blink” effects, we might as well dip into white’s deep stable of creatures with fantastic enters-the-battlefield abilities (or in the case of Reveillark, leaves-the-battlefield effects). Thraben Inspector has done such great work in Standard, I am eager to try it in Commander. Oreskos Explorer, Wall of Omens and Sun Titan provide excellent value, while War Priest of Thune, Angel of Finality, Voidstone Gargoyle and Duplicant give us great utility. Personally, I have been really trying in various decks to get Quarry Colossus and Eldrazi Displacer onto the battlefield at the same time to take down the table’s Big Bad, and maybe I will pull it off here.

Speaking of value grinding with “blink” effects, we should not forget about Stoneforge Mystic. I haven’t gone too deep on the Equipment theme here, since I’m focused on planeswalkers, but Skullclamp and Nim Deathmantle just do good work, and with a fair number of creatures with enters-the-battlefield effects, Blade of Selves is a slam-dunk choice.

I will round the deck out with a sweet collection of “good stuff” cards. I am particularly happy with Mistveil Plains being able to take a planeswalker in my graveyard and reload it into my library to fetch out with Djeru.

In the beginning of July, I talked about a new spin on my mono-green Eldrazi Standard deck leaning heavily on some new cards from Hour of Devastation. My operating thesis was:

1. Hour of Promise is a great card, but Standard is too aggressive to be spending your fourth or fifth turn casting a sorcery that does not have any immediate battlefield impact. This means that you want to play enough Deserts to take full advantage of the card’s ability to make two Zombies.

2. Deserts are actually good enough that it is fine to play enough to naturally have Deserts already on the battlefield when you cast Hour of Promise so you can search up a non-Desert or two and still get the Zombies.

I have now put my deck through some paces and have concluded that both of these theories are correct. In fact, Deserts have overperformed my expectations; Hashep Oasis has managed to shave a turn off my clock a few times to end games out of nowhere, and putting my Scavenger Grounds onto the battlefield has been a nice hedge against both Zombie recursion and Torrential Gearhulk being more than just a big flash creature. I have made use of both Hostile Desert and Dunes of the Dead. Desert of the Indomitable entering the Battlefield tapped has hurt a couple times, but it has also been nice to cycle it away when I draw it later in the game.

One card that did disappoint was Ramunap Hydra. The card was not bad per se, and it did some work in a few games, but it just seemed to die all the time. I swapped it out for Thought-Knot Seer and was very happy with the change. Sorry, Hydra—you will probably shine better in a smaller Standard this fall!

If you’re looking for something outside the box that has game for Friday Night Magic, keep your eyes on my Twitter and Facebook pages for updates to Mono-Green Eldrazi Deserts going forward!