“When you play the game of thrones, you win or you die.” – Cersei Lannister

I’m not gonna lie; I was chomping at the bit waiting for previews of Conspiracy: Take the Crown. I certainly enjoyed drafting the first Conspiracy, but what I really loved were the cards I could put in Commander decks and I knew the second Conspiracy set would have plenty of Commander goodies too. Getting to see Kaya, Ghost Assassin last week was pretty sweet, but what I really wanted to see was a legend.

Wow, I didn’t have to wait long– they kicked off preview week with the most notorious legend on Paliano with Queen Marchesa, and she’s awesome! 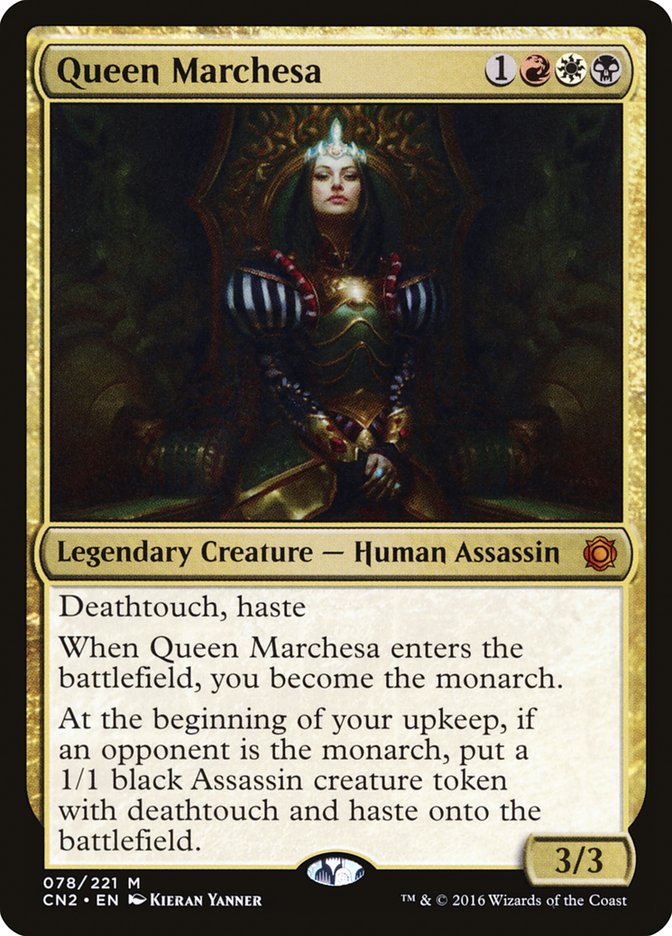 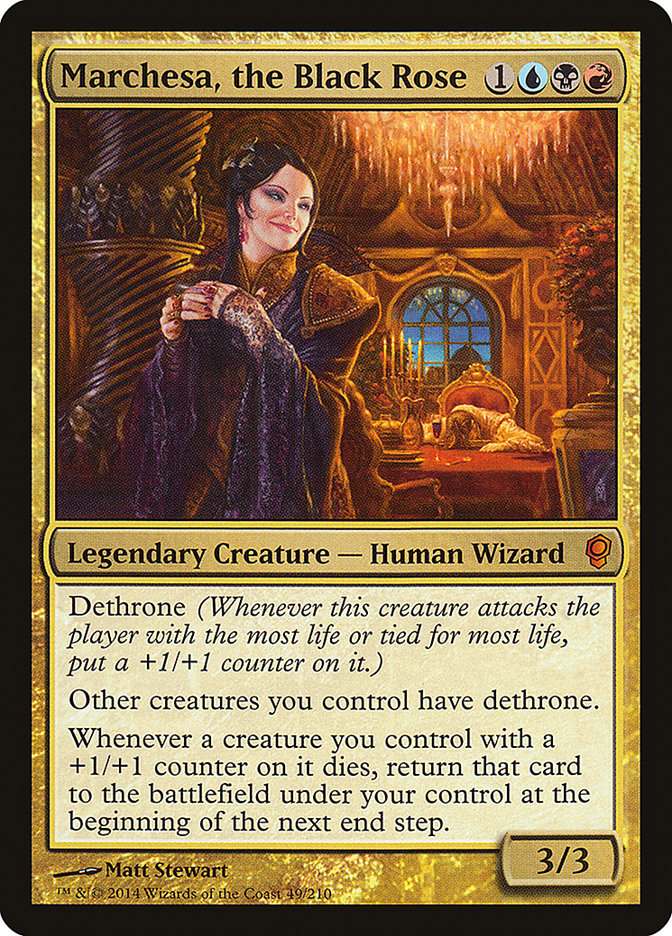 It is interesting to compare Queen Marchesa to the last time we saw her as Marchesa, the Black Rose. They are both 3/3 Humans for four mana but that’s where the similarities end. Marchesa has put in some serious work redefining herself.

Her colors have migrated from the Grixis shard to the Mardu wedge. She traded in blue’s individualistic quest for perfection for white’s tyrannical order, which makes sense story-wise—now that she’s achieved perfection by becoming the queen, her desires have changed to maintaining the status quo. She gave up being a Wizard and took up the profession of Assassin, which certainly feels like a major career pivot. She’s also lost that winsome smile.

I like how the abilities in the text box has shifted from attacking the “monarch” with the dethrone ability to just entering the battlefield and making you the monarch. Not to mention providing you with tools for taking the crown back should someone take it from you. A 1/1 Assassin token with haste and deathtouch isn’t worth a card to block it, but if your opponent is the monarch and doesn’t block, you’ll take back the crown. 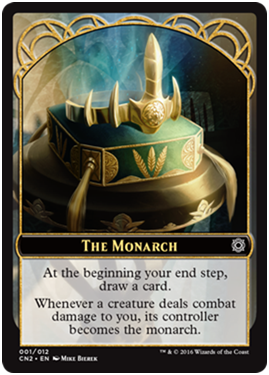 (What happened to the word “of” in the first sentence? Hmmm…)

I really love how this monarch mechanic creates a subgame within the Magic game. A lot of times Commander games involve players setting up defenses and, when looking around for a target, there’s no real incentive to start attacking, but when someone becomes the monarch suddenly there’s reason to attack someone guilt-free—I mean, no one forced you to put on the crown, right? Encouraging attacks help games get moving towards a conclusion, stimulating conflict and big plays. So let’s build a deck with Queen Marchesa that’s all about getting the crown, keeping the crown, and getting it back if need be!

Take (Back) the Crown!

When Queen Marchesa was spoiled, she was the only card that said “you become the monarch.” We could still build our deck around it, since Queen Marchesa was our Commander and our Commander is nearly always available to us. Since then though we’ve seen quite a few other cards spoiled that also say “you become the monarch.” I’ve put a lot of them into this deck too as backup to Queen Marchesa, and some of them have some really cool abilities tied to them, like Custodi Lich and Protector of the Crown.

But not all of the cards fall within the Mardu color wedge – those weasely Simic colors want to get in on the monarch action too! The blue cards in particular are going to be quite pesky backed up with blink effects that can trigger the “you become the monarch” ability at will. Luckily the Mardu color scheme has no shortage of ways to kill or exile these pests, but we’ll want additional ways to steal the crown back if straight-up attacking normally doesn’t work.

Iroas, God of Victory’s abilities really help Queen Marchesa’s cause quite well, making blocking difficult and just flat out unappealing. Trample combines quite nicely with Queen Marchesa’s deathtouch ability, so I’ve added in cards like O-Naginata, Loxodon Warhammer, Chariot of Victory and Power Matrix to the mix. Behind the Scenes and Dauthi Embrace can in some instances make blocking impossible, so we can nab back the crown when it is taken by traitors.

It’s kinda cool – and by cool I mean unfortunate – that the monarch mechanic has a built=in way for people to steal monarch away even if they don’t play one of the “you become the monarch” cards, and that’s simply to attack you and deal damage to you. The Mardu color combination has quite a few ways to prevent that from happening. Gee, I’m beginning to see why Marchesa changed her color scheme!

There’s making attacks painful with cards like Ghostly Prison, Windborn Muse, Abu Ja’far, Mogg Maniac and Michiko Konda, Truth Seeker. You can prevent damage dealt to you with Darkness, Batwing Brume, Dawn Charm, Comeuppance, and Channel Harm. What’s nice about playing these one-shot spells is that you should be drawing cards from being the monarch which should help keep your hand fueled if you’re burning these off. You can negate potential attackers with Maze of Ith, Royal Assassin, Icy Manipulator and Grenzo, Havoc Raiser. 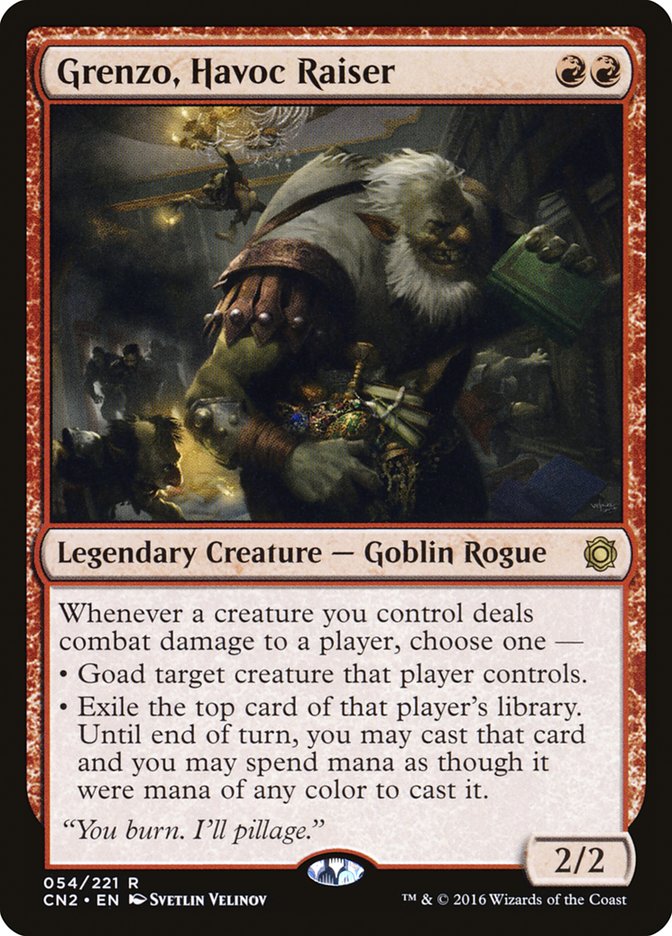 Can we take a moment to bask in the awesomeness of Grenzo, Havoc Raiser? I know people will be tempted to elevate this amazing little Goblin Rogue to Commander status, but he truly belongs amongst the 99 subjects to Queen Marchesa. If you’re going to have creatures sneaking by blockers with Dauthi Embrace or Behind the Scenes to steal back the crown, you might as well goad problematic attackers into attacking other players.

And if there are no other players?

Well, then, it’s Christmas time in Paliano, and Santa Grenzo is bringing toys from your remaining opponent’s deck to all your good and loyal subjects!

What’s kind of interesting about Queen Marchesa is that sometimes you’re going to want her to die so you can cast her again and become the monarch (assuming some usurper has come and taken it from you). However, that takes careful plotting and scheming (and mana), so in the meantime we’ll want to keep Queen Marchesa around, spitting out 1/1 hasty Assassins with deathtouch going after the traitor. Mother of Runes, Swiftfoot Boots, and Bastion Protector do the good work they do in many Commander decks, and we can port Archangel Avacyn over from Standard to give your team indestructible — though be careful about her transforming, since you could accidentally off the queen.

Samite Elder makes a rare appearance here but does good work – again! — because of Queen Marchesa’s Mardu colors. Assuming the queen is in play, tapping Samite Elder gives all your creatures protection from all the removal colors outside of something weird like Pongify or Beast Within.

Rune-Tail, Kitsune Ascendant flipped does good work in any Commander deck interested in combat but is particularly nice here with the deathtouch found on Queen Marchesa and her Assassins. It also protects you from Archangel Avacyn transforming.

You know I put Nim Deathmantle in just about any Commander deck with creatures in it, but I expect an uptick in popularity thanks to all these creatures with “you become the monarch” printed on them. Creatures die and die often in Commander, so bringing one of these creatures back from the dead for just four mana and nabbing the monarch crown is a heckuva deal.

Okay, so here’s the deck I’ve cooked up for when I get my mitts on these Conspiracy cards! 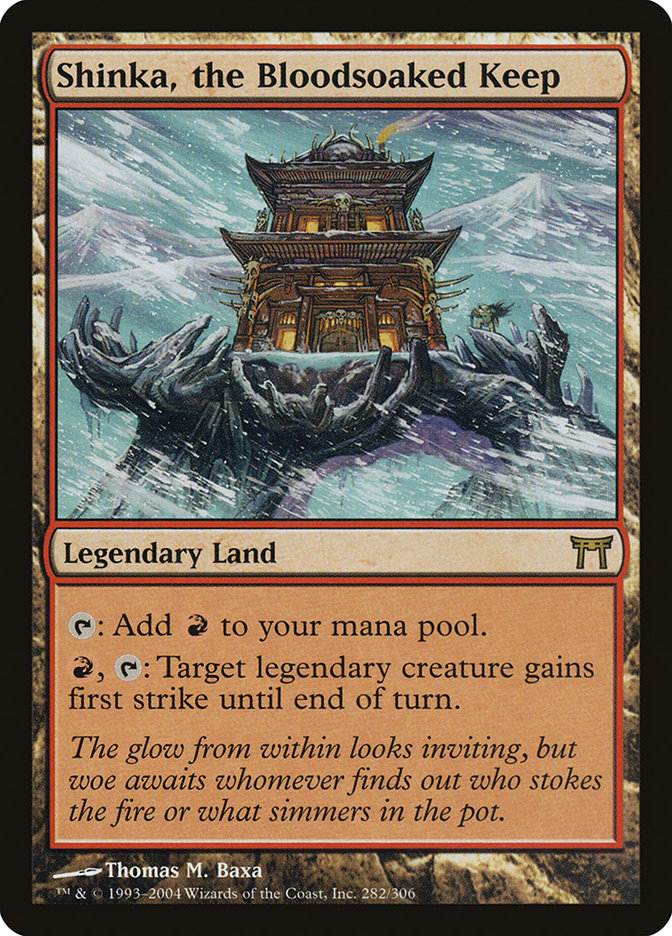 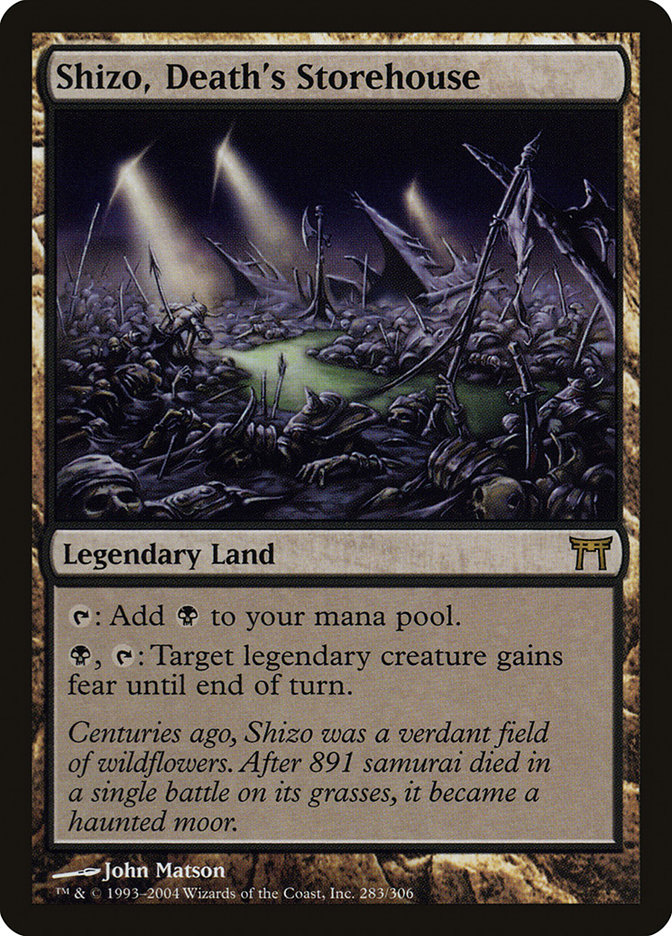 I’m super-stoked the SCG Tour ®is making a stop in just a few weeks here in my hometown of Richmond. Who’s coming down? Please make sure you find me and say hello. I’ll be playing in the main Standard event, and if I scrub out I’ll looking for some pickup games of Commander. If you’re coming to town, and you happen to love Netflix’s incredibly cool series Stranger Things – and if you haven’t seen it yet, what the heck are you waiting for? – I just found out about a really cool event happening Saturday night, September 3rd:

A Stranger Things-themed dance party called The Upside Down RVA.

What?! I’m an old man and even I might have to muster myself down there for a couple of hours Saturday night. It’s at a club called The Broadberry that’s about a fifteen-minute drive straight down Broad Street, the same street as The Richmond Convention Center. Here are a few of the details:

An immersive tribute to the instant classic. Explore an 80s-themed dance party with an amazingly vibrant soundtrack, mindblowing visuals, top-notch DJs, and live performance that speaks to the nostalgic core of every Stranger Things fan. Costumes & Cosplay are encouraged & rewarded!! Stranger Things installations in the Broadberry and onstage!

I dunno, maybe I’m being silly but this sounds like totally awesome nerd fun. What do you think?

And let me know what you think of my Queen Marchesa deck. Have I overlooked anything? How would you go about building it? What do you think of the monarch mechanic?