I remember when Squee, Goblin Nabob was first printed it made quite a
splash on the Magic scene. While the most powerful way to leverage the
ability was as a “free” discard – to things like Merfolk Looter, Forbid,
and Zombie Infestation – there were plenty of times when you’d just cast

Squee and use him as a chump blocker your opponent had to deal with every
single turn. Sometimes the game would get to the point where Squee would
start turning sideways for a point of damage beatdown each turn. In many
ways the card exemplified the personality of an annoying Goblin that was
always around and bothering people.

Now that we’re back to Dominaria it makes perfect sense that the
immortal Squee is back again, and appropriately named.

The new Squee loses the discard free roll ability, but doubles down on the
ever-present nuisance characteristic. We’ve had a couple cards we could
cast from exile, and a fair number of cards we could cast from the
graveyard, but I believe Squee, the Immortal is the first to have both
abilities rolled into one. Which is a powerful set of abilities tied onto a
very nearly insignificantly sized creature.

So of course, we need to build a Commander deck around it! I think there
are some interesting ideas to consider when you have a three-mana creature
you can pretty much always count on being able to access and cast turn
after turn after turn, and for the most part never need to worry about ever
having to pay the Commander tax. One of the first things that comes to mind
is a Voltron strategy, and on the flavor side I love the idea of making a
2/1 nuisance creature into a game-winning threat. Since we’re mono-red, the
best way to Voltron Squee is likely with equipment cards. 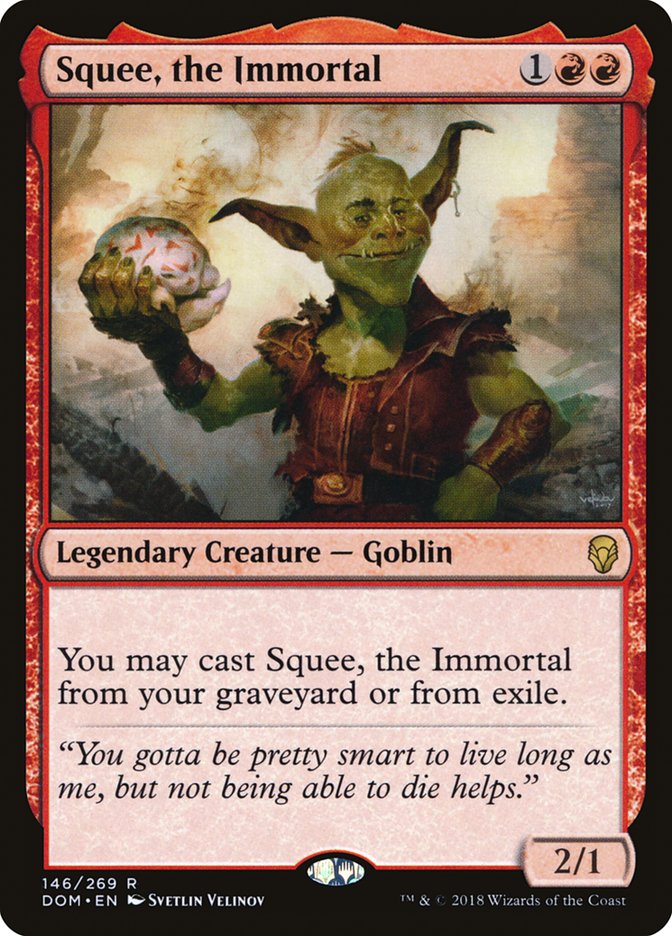 The next thing to come to mind is sacrificing for profit. Red and artifacts
offer a fair number of cards that do that, and some of those want a
specific creature type-Goblins! And Squee happens to be that creature type.
So that means we may want to leverage some Goblin synergies in this deck
too, though the other elements will give it a distinctly different flavor
from a typical Goblin tribal deck.

With all that in mind, let’s get brewing!

Living the dream would be turn 1 Sol Ring, tap it to cast Hero’s Blade and
then on turn 2 cast Squee, the Immortal and attach Hero’s Blade for a 5/3
beatdown machine.

Sword of Feast and Famine and Sword of Light and Shadow are the premium
pieces of equipment we want to gear up Squee with to get some sweet combat
triggers. Tenza, Godo’s Maul is another one that turns Squee into a nice
beatdown machine, and a Bonehoard in the late game can make Squee
positively frightening.

Grafted Wargear and Grafted Exoskeleton are potent pieces of equipment that
have a scary drawback, but when Squee just comes back from the graveyard
you don’t mind utilizing them. Captain’s Hook is similar but a bit less
powerful; however, the idea of Squee, the Immortal chopping off his arm to
attach a hook to his hand and become a pirate gives me some flavor giggles.

I thought Assault Suit would be a fun card to play here, especially if you
can get Squee big enough to be quite a threat; pass him around to let
everyone else experience the awesome power of Squee!

Goblin Bombardment has Goblin in the name, but it doesn’t discriminate on
what sort of creature you sacrifice to deal a point of damage. Trading
three mana for one damage isn’t the most efficient resource exchange
available in Commander, but sometimes it’ll get the job done. I love the
idea of feeding Squee to the devouring Dragon cards to give each of them a
boost. Helm of Possession is an all-star here; sacrifice Squee to steal the
best creature on the battlefield, and then recast Squee to potentially do
it again.

Then we’ve got some Goblin sacrifice effects that take advantage of Squee’s
creature type. Goblin Lookout reinforces our thought to play more Goblins,
Arms Dealer can help take down medium-sized creatures, and Clickslither can
get large and trampling depending on how many Goblins you feed it. Goblin
Grenade is a classic and while it’s not nearly as scary in a format where
people start at 40 life, five damage isn’t nothing.

Okay, so let’s round out Squee’s Goblin squad with some sq-weet cards
(yeah, I went there). I even tapped Squee, the Immortal’s previous
incarnation, Squee, Goblin Nabob, for some fun crossing-the-timestream
flavor wins. I love Lightning Crafter here since you could exile Squee with
the required Champion ability and then just go ahead and cast Squee from
exile if you want.

With enough mana and a Goblin Assassin on the battlefield, you could cast
Squee and get the trigger, and if you’ve got to sacrifice a creature you
could choose Squee and then cast it again and again if need be.

I’m going to run 39 lands and a fair amount of ramp cards here because I
expect Squee and sacrifice effects along with equip costs are going to give
us plenty of mana-sink opportunities.

Mono-red can be a little challenging to keep the gas flowing, but we have
some options. Skullclamp is particularly good in a deck that churns out
Goblins, and worst-case scenario Squee and Skullclamp converts four mana
into two cards, which is not a bad rate. If you have a Wheel of Fortune I’d
find room for that as well.

Many of red’s usual suspects here. Word of Seizing is particularly good at
permanently dealing with a huge threatening creature if you’ve got one of
your sacrifice outlets on the battlefield.

Last but not least are some other good cards for our red deck. Path of
Ancestry is good for our semi-Goblin tribal theme, but since we’re planning
on casting Squee quite a bit attaching a scry each time can really help
with card flow.

Mass Mutiny is a great way to break through standoffs and it benefits from
our deck having sacrifice outlets.

Lastly, I love Tyrant’s Familiar on sheer flavor-little Squee having a pet
7/7 Dragon just sounds like too much fun.

So, what do you think? Is Squee, the Immortal worth building a Commander
deck around? Have I overlooked any other sq-weet cards (yes, I went there
again)?

If you’re curious about some of my Standard brews using cards fromDominaria, be sure to check in on my Twitter and

pages and let me know what you think! I’m super-excited about the set not
just for Commander but for Standard too.