Last Friday I finally got to draft Aether Revolt and had a good time. I opened a Hope of Ghirapur, which seemed a decent first pick. It keps my colors open, plays nicel with artifacts, can trigger revolt, and can win you the game just by being a flier. I nabbed a few blue cards and dabbled a little bit in black and red before Fatal Push and Tezzeret’s Touch locked me solidly into U/B. I went 3-1 on the night and ended up in fourth place on tiebreakers, but considering the cards I actually drafted, I think I had already won before I played my first match!

I did live the dream of casting Tezzeret’s Touch on a flier turn 3 in two games—once enchanting Hope of Ghirapur, and once on a Sky Skiff. I cannot lie; it felt good. It felt so good, I am a little worried about drafting this format again, since there’s no way I can replicate this feeling.

Speaking of being worried, today I would like to talk about Atraxa, Praetors’ Voice. 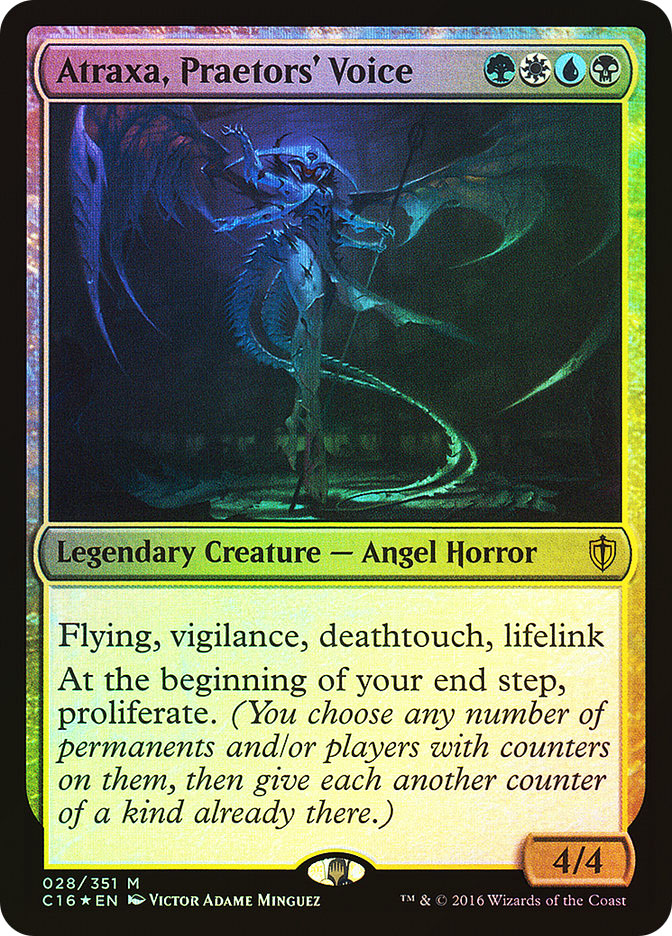 I have been holding off on building a deck with Atraxa as my Commander because you cannot walk down the street without tripping over an Atraxa deck. If you sit down with four random strangers, the odds are good one of them will pull out their Atraxa deck to play.

And with good reason: Atraxa, Praetors’ Voice is good. Really good. Most of the games I’ve played facing off against Atraxa have involved most of us throwing resources at the Atraxa player trying to keep his or her side of the battlefield from going nuts with +1/+1 counters. I feel bad about the Archenemy approach, but you can’t really cut most Atraxa decks any slack or you just get run over. I know it cannot be much fun for the Atraxa player either.

Is there a way to build a non-threatening Atraxa, Praetors’ Voice deck that still has some teeth? After pondering the question for a couple weeks now, I recently stumbled across the answer (I hope) going all the way back to Fallen Empires! 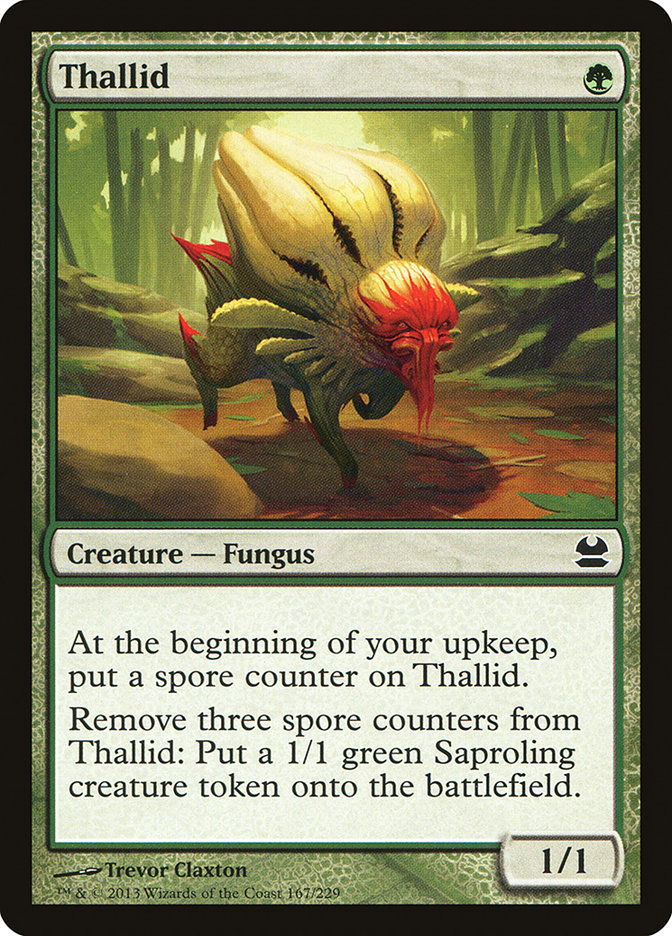 Atraxa is a collection of potent keyword abilities, but the scary one is proliferate. When you fill your deck with creatures that have or can get +1/+1 counters, proliferate can be downright terrifying as the creatures quickly grow to gigantic proportions. So the key to cranking back the terror level is to ditch the +1/+1 counters and go with spore counters. Who can be worked up about proliferating spore counters?

Thallids and their Fungus cousins are definitely quite low on the power scale, especially in recent years where creatures have had their power level cranked up high. They have many cool powers and can certainly be tricky and flexible, but in general the best thing they can do is crank out a 1/1 Saproling creatures for each three spore counters you accumulate. A few of these are deceptively decent—Pallid Mycoderm’s ability can quickly turn a horde of otherwise unassuming Fungus and Saprolings into quite a threat.

I have to admit that “Savage” and “Feral” Thallid’ names crack me up—their vicious superpower is regenerating.

Let us take a moment and contemplate the beauty of Fungal Bloom. 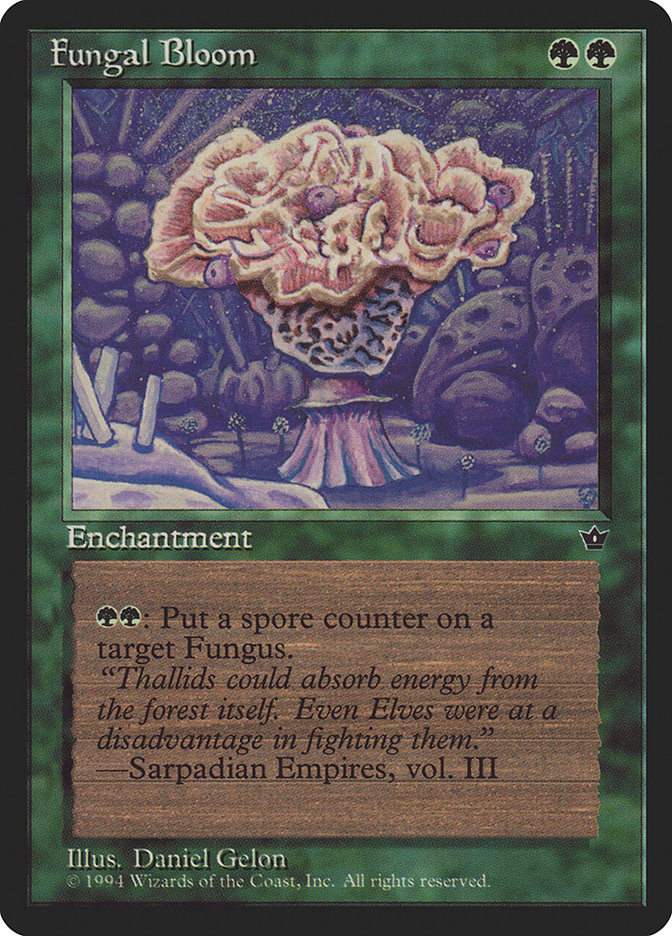 This is one of the power cards from Fallen Empires, a rare that was a lynchpin for any Thallid-themed deck. The designers of the card obviously wanted to be very careful that the card would not become too abusive, costing not one but two green mana to add a spore counter to target Fungus. So let us do the math. For an initial mana investment of two green mana, you could then sink two mana to add a spore counter. So for each six mana we spend… we could make a 1/1 Saproling creature!

Now, I am not just pointing at an old card and mocking it from a distance—I played Magic back when Fallen Empires just came out, and I built a Thallid deck. Even then, Fungal Bloom was just sad. However today, in this deck, it serves a purpose as camouflage, a Jedi mind trick – this is not the Atraxa deck to be worried about. It has Fungal Bloom!

Luckily for us Thallid fans, Wizards tossed us a few gems over the years like Thelon of Havenwood. Turning dead Fungus creatures into spore counters that also boost power and toughness is sweet. So much so that I thought it would be fun if Thelon or even Atraxa could get in on the Fungus fun with Runed Stalactite, Mirror Entity, or Xenograft. Just try to stifle your giggles when you play Xenograft and name “Fungus.”

Speaking of Fungus, when I was searching Gatherer for Fungus creatures, I ran across Fungal Shambler. If ever we are going to play Fungal Shambler, it has to be this deck.

Now, if there is anything that Fungus likes more than spore counters, it has to be Saproling token creatures, so let us make sure we have plenty of ways to make them other than waiting on spore counters to accumulate.

Thelonite Hermit; Nemata, Grove Guardian; and Verdeloth the Ancient bring along Saprolings and then boost them up, which is sweet. I purposely steered clear of +1/+1 counters in order to keep Atraxa as non-threatening as possible, but I thought not including Ghave, Gurus of Spores and Mycoloth would just be wrong. However, I am not looking forward to keeping track of spore counters that might be put on those two creatures!

Speaking of different types of counters on the same creature, I had Sporogenesis in my decklist for a little while until I realized that it put a fungus counter on a target nontoken creature, not a spore counter. Having to potentially distinguish between spore counters, the occasional +1/+1 counter, and fungus counters seemed logistically tenuous.

Okay, so we have lulled our opponents into thinking they are playing a version of Atraxa, Praetors’ Voice that is not so bad. There is some Fungus on the battlefield, a couple of Saprolings. We equip one of our innocuous creatures with Basilisk Collar and attack with it. Who is going to throw away a blocker on that? No blocks, they say. Tainted Strike, you respond. Get a couple of poison counters! Aha, now Atraxa’s proliferate is quite deadly in an entirely different way! I like peppering in the infect angle because it plays thematically with the Fungus theme (poisonous mushrooms) while working well with Atraxa. I particularly love the idea of having a horde of Fungus and Saprolings and casting Triumph of the Hordes before attacking—now that is sick!

Let me tell you a story about Fecundity. Many years ago, before there was Commander or EDH, I was playing in fifteen-player group game; yeah, we used to roll like that. Our decks were often 300-card monstrosities, and you could play up to four copies of cards. I had an Elvish Farmer and a Fecundity on the battlefield when I drew Spontaneous Generation. I cast it, made a bunch of Saprolings, and then sacrificed them to Elvish Farmer to gain a bunch of life and draw a bunch of cards. I then cast Multani, Maro-Sorceror and sacrificed it to Greater Good to draw a crazy amount of cards. I drew another Spontaneous Generation and cast it to make a whole bunch of Saprolings, enough so that I had enough targets that I could hit everyone else at the table with Firestorm, discarding enough cards to kill everyone.

The moral of the story? Elvish Farmer, Fecundity, and Spontaneous Generation go great together!

Even though the Fungus and Saprolings will look meek and mild most of the game, opponents will eventually try to kill them all, so I am going to include some ways to protect them. Eldrazi Monument is an obvious pick, but I also wanted to make use of the new powerhouse card Heroic Intervention. Giving your whole team indestructible and hexproof is amazing for just two mana.

The Ready side of Ready//Willing is sweet for protecting your team, but both sides are awesome and if you have enough mana to fuse you are really doing it.

Doubling Season is a slam dunk for any sort of counter-focused deck, and being able to speed up the spore counters is a big plus. This deck also gets to take advantage of the other side of Doubling Season with the Saproling generation.

Paradox Haze does some good work with the upkeep spore counter triggers, effectively acting as another Doubling Season for that.

We can round out the deck with many of the usual suspects. I thought Rancor would go nicely to juice up one of our sad little creatures, especially if we also got Grafted Exoskeleton out there. I always like to run Darksteel Mutation in my white decks, since sometimes it is better to neutralize a Commander than it is to send it back to the Command Zone.

Okay, so here is what I have carefully cultivated and grown from tiny spores:

I kinda hope I run across someone playing Gisa and Geralf so we can have some Plants versus Zombies moments!