Ixalan Prereleases this weekend and Magic fans the world over are geeking out over the full set list that was made available last weekend. No small part of the hype is the super-cool Dinosaurs, which have finally made a big splash in Magic as their own tribe. Of course, one of the splashiest of the big splashes is this large monster: Gishath, Sun’s Avatar! 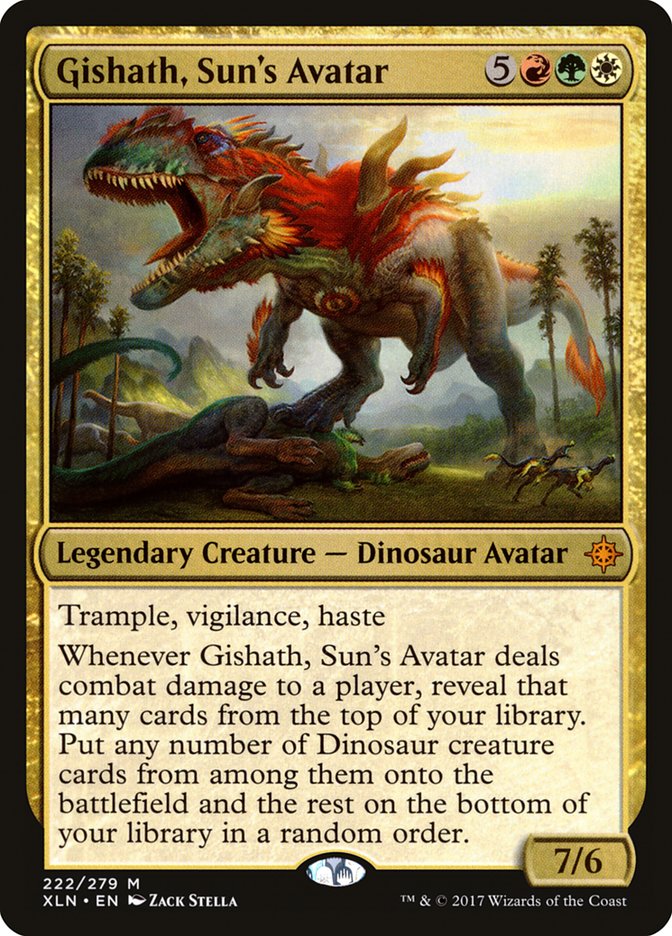 Now this is a monster that packs a punch, but its biggest ability is predicated on having enough Dinosaurs in your deck so that you can “hit” on at least one Dinosaur you can cast for free. In a 60-card deck where you can play four copies of a card, you can assuredly make that happen, but things might be a little trickier in a hundred-card singleton format. I know Wizards is issuing errata on a handful of old cards with creature type Lizard and making them creature type Dinosaur to help with Dinosaur tribal, but my hunch is that we won’t yet have enough good Dinosaurs to make a Gishath, Sun’s Avatar deck that can hang at the Commander big kid table. We will probably want to wait until Rivals of Ixalan.

To test this thesis, I decided to take each of the Dinosaurs from Ixalan, along with the newly promoted Dinosaurs from the old card sets and divide them into three camps. I can also sprinkle in some of the better Changeling creatures that can slot into just about any Tribal deck. One grouping would be Dinosaurs I would be happy to have in my Commander deck, one I would call my “second string” Dinosaurs, and then there are probably going to be a few that are just not worth the card slots. I would also do the same thing with the “Dinosaurs matter” cards that are in Ixalan. Here is where everything landed:

Dinosaurs I’d be Happy to Have

The two-mana Dinosaurs are not really going to have anyone trembling in their boots, but I thought it was important to potentially get some Dinosaur battlefield presence early in a tribal deck, so I am happy to have them. As we get further up the curve, the “just stats” Dinos get added to the second string list.

I have many fond memories of Deathmist Raptor from its time in Standard, but to unlock its true potential, you need to pair it up with morph or megamorph cards. I am not sure how those would play in a tribal deck, but it is something to keep in mind. Still, a 3/3 deathtouch for three and a relevant creature type pushes it up to happy-to-have status, methinks.

I am not entirely sure about Mirror Entity, since it is going to take a lot of mana to make our creatures as big as some of our bigger Dinosaurs, but looking at the Dino support cards that are not Dinosaurs, it might be nice to occasionally have them join in the Dinosaur fun.

Magmasaur had me on the fence. A 5/5 for five is not terrible, but for each of your next turns, you have to decide whether to shrink Magmasaur or blow it up. Ultimately, I decided having a Dinosaur mini-battlefield sweeper would be some welcome flexibility, and doing damage to your own creatures can yield some enrage benefits.

Dino Support I’d Be Happy to Have

The Enrage Dinosaurs tend to be really good and pushed for Standard, so we definitely want some of that action here in Commander. Fiery Cannonade is an Enrage enabler in disguise, so I put it here as Dino support.

I’m not sure Huatli, Warrior Poet is strong enough for Commander at that mana cost, but I think we should definitely give it a shot if we crack one open in our packs. I like how the minus ability can be used not only as a Falter but also as an Enrage enabler.

Many of the old-school cards newly minted as Dinosaurs fell in this pile and are notable in demonstrating how much better creatures are nowadays than they used to be. The Dinosaur artwork was often quite good, but on the stats, they did not have people quaking in their boots.

While I think Commune with Dinosaurs could be quite good in Standard, and probably very good once Rivals of Ixalan brings more pushed Dinosaurs, I do not think the density of Dinosaurs in our Commander deck is going to enough to prevent us from missing with it too many times.

The Human Knights that get better with Dinosaurs are around are intriguing and lead me to think there might be a cool Knight sub-theme we could add to our Dinosaur deck once Rivals of Ixalan comes out.

Dinos Not Worth the Slots

I feel that Rampaging Ferocidon will be a fierce addition to aggressive decks in Standard, but that sort of card can really backfire in Commander, so I do not think I would want it in my deck. Imperiosaur and Pangosaur are not anywhere near as powerful to be worth the drawbacks, despite the incredibly cool artwork.

Okay, so my first pass was to take the first string Dinosaurs and Dino Support and fill out the mana curve to see where we start. 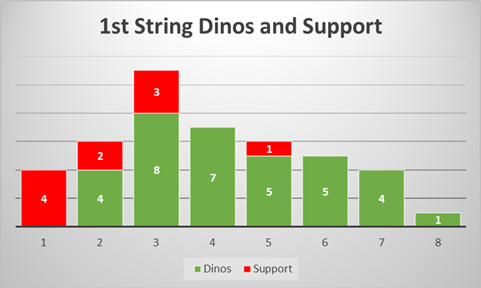 This adds up to 44 cards, which includes 34 actual creatures with type Dinosaur—one-third of our deck! I am actually surprised we are so close to having a solid tribal deck without diving into our second string choices. I think my thesis was wrong; it is looking like we can absolutely build ourselves a Dinosaur Commander deck with Gishath, Sun’s Avatar at the helm!

As a rule of thumb, I start with 62 nonland cards, so that leaves eighteen slots to fill with generic tribal support and other utility or “good stuff” cards. The three-mana slot is already pretty full, so other than maybe one or two must-includes, I’ll need to fill in at other casting costs, leaning more heavily on one- and two-mana cards when possible. Let us see what generic tribal cards we have available.

Mutavault, Path of Ancestry, Cavern of Souls, and Unclaimed Territory are all slam-dunks, but they do not count on our mana curve. Of the rest, I think I will add Stoneforge Masterwork, Metallic Mimic, Heirloom Blade, Herald’s Horn, Door of Destinies, and Vanquisher’s Banner. This was particularly hard because there are so many three-mana cards I would want to include, but we are already pushing our limits at three mana because of our Dinosaur distribution. Urza’s Incubator, Shared Animosity, Adaptive Automaton, and Descendant’s Path are all cards I am sad to leave behind. Maybe we will have some great Dinosaur cards at different mana costs in Rivals of Ixalan and we can trim a few three-mana Dinosaurs and add in these great tribal cards.

If we go with a Knight sub-theme, then I really like Runed Stalactite so we can get some cross-tribal synergies going.

I came close to putting in Tribal Forcemage, since it is a morph creature that could potentially bring back a dead Deathmist Raptor. I will keep that card in mind when I tweak the list in the future.

The Enrage mechanic works perfectly with the fight mechanic, so I wanted to include a few of those in the deck. Even without Enrage, many Dinosaurs are perfectly sized to fight. This gives us extra pinpoint removal that is very welcome!

While some of the Dinosaurs provide a little utility, for the most part they are about stomping on your opponents, so we are going to need to find room for some utility spells. Pyrohemia strikes me as a fantastic Enrage enabler we can activate at any time, though having it go away after a battlefield wipe will be disappointing. I also look forward to cashing in dying Dinosaurs for cards with Greater Good, which is always a great inclusion for green creature decks.

Here is how the curve ended up: 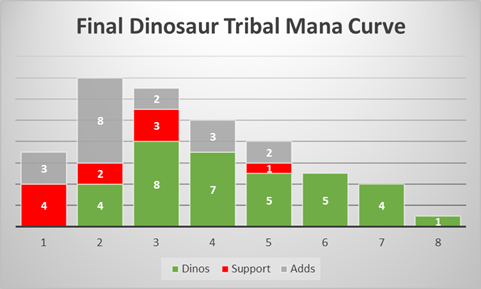 Hey, that turned out quite respectable! I am pleasantly surprised Dinosaur fans can build a Commander deck and not even have to dip into the lackluster Dinosaur choices to do it.

From the jungles of Ixalan to your Commander table, Dinosaurs are here, baby! What do you think? Are there any cards I overlooked? How would you go about building tribal Dinosaurs?