There is a legendary creature tied to each of the four tribes highlighted by Ixalan. The one for Dinosaurs and the one for Pirates are very much tribal “lords” in that their power is tied directly to playing a large number of cards with their tribal type. The other two are more freelance in nature; while they can be leaders of a tribal deck, their power is not tied directly into building a tribal deck. Last week I wrote about the Merfolk legendary creature Tishana, Voice of Thunder, which thrives in an environment of playing a fair number of creatures and having a large hand size. This week, I wanted to check out the Vampire legendary creature, Vona, Butcher of Magan. 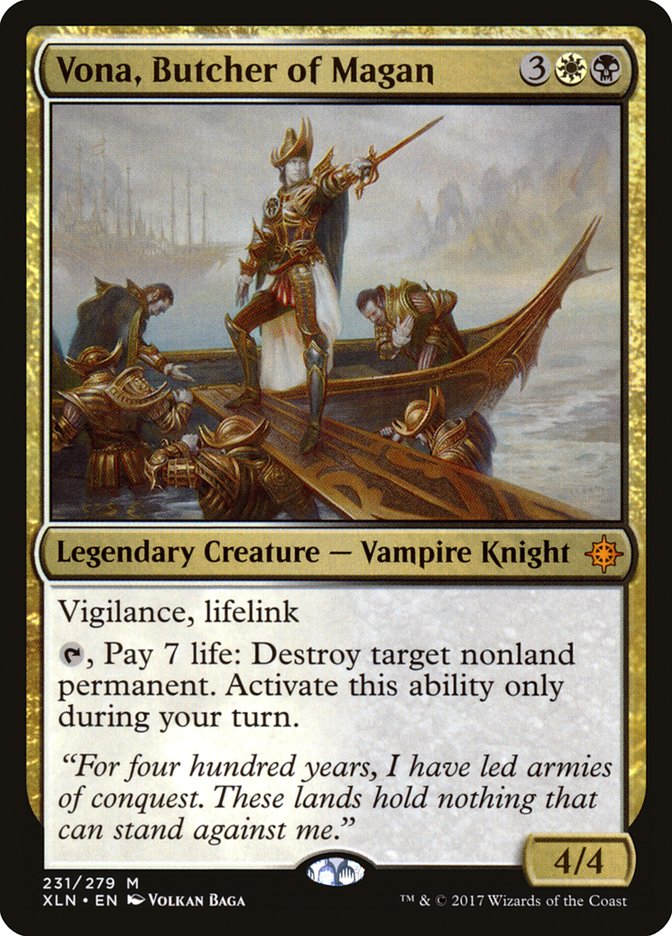 Vona has quite a nifty collection of abilities and seems powerful enough to see consideration for Standard, probably depending on the population density of Glorybringers in the metagame. A 4/4 is a decent size otherwise.

Vigilance, lifelink: Vigilance is a potent ability in multiplayer, especially when attached to a sizeable creature since it allows you to attack one opponent while not leaving you open from a counterattack by that player or other opponents. Lifelink is a handy ability to help buffer your life total from attacks from your opponents, and since we are playing black, there are quite a few cards that allow us to leverage extra life for profit.

“Tap, Pay 7 life: Destroy target nonland permanent. Activate this ability only during your turn.” Speaking of leveraging extra life for profit! This is quite a potent ability, and incredibly useful in Commander where there will be no shortage of potential targets. It’s often tough in Commander to have the proper mix of point removal and mass removal, and Vona does a great job of shoring up the point removal side of the equation, and the flexibility is off the chain—any nonland permanent that needs removing, Vona can get it done.

However, the condition attached to the ability makes it very interesting… you can only use it during your turn. This provides some tension with the vigilance ability, doesn’t it? I suspect Wizards probably tested this card without that ability and found it rather oppressive. There are no decisions to be made; you simply attack each turn, and then during your opponent’s turn, tap to destroy something that needs destroying. You could simply build an entire deck around protecting Vona and riding it to victory.

Adding the condition adds complexity to make the game interesting—do you attack with vigilance and leave it as a blocker on your opponents’ turns, or do you use the ability and leave yourself potentially open to attackers? Making the right choice could make or break your battlefield position. That said, there is some nuance to the condition. While it’s limited to being used during your turn, it can be used at instant speed. You can declare Vona as an attacker, then tap to destroy a potential blocker and get in for four points of damage.

Another nuance to the ability is it’s a destroy effect. Black and white removal sometimes exiles which is the ultimate in utility since it can handle even indestructible cards. While Vona can’t provide that sort of removal, destroying permanents rather than exiling can be useful for things such as morbid-mechanic conditions.

We’re playing white and black, so there is no end to the number of good cards we can play that gain us life. I like making use of Authority of the Consuls, Blind Obedience and Ashes of the Abhorrent, since they provide some disruptive elements as well. There are quite a few cards that grant our creatures lifelink, but since Vona and some other creatures I want to include already have lifelink, I leaned more towards cards that provide the lifelink ability without actually providing lifelink: Spirit Loop and Noble Purpose. These will “stack” with each other while lifelink abilities will not. Enchant Vona, Butcher of Magan with Spirit Loop and attack, you’ll gain the four life from lifelink and four life from Spirit Loop – which quite nicely pays for the activated ability while still netting you one life.

Of note, Westvale Abbey actually costs you life to make Cleric tokens, but I’ve got it in this list since its flip side Ormendahl, Profane Prince has lifelink. Pairing it with Noble Purpose may seem particularly profane, but the eighteen life points gained will feel oh-so-good.

Assuming our life total is stacked, we may want to use Vona’s ability multiple times. Thousand-Year Elixir springs immediately to mind and will also let us use Vona right away. A deeper cut but one that’s particularly awesome is Umbral Mantle: you can equip Vona for zero mana, attack, tap to destroy a blocker, and then pay three mana to untap Vona and give it +2/+2. Vona hits for six damage, and with lifelink very nearly pays for the activated ability. If you have a bunch of mana lying about, you can go on a creature death rampage while boosting Vona more and more! Don’t expect Umbral Mantle to stick around very long in most Commander games, but if your opponents are light on artifact removal, things could get very interesting.

Maze of Ith is a great tool to use against your opponent’s big creatures, but it can also untap your own creature in a pinch. If you do this, Vona won’t deal any combat damage, but sometimes you may need to destroy two nonland permanents.

While the deck will probably function just fine without Vona on the battlefield, I would like to keep the card there through some resistance. Mother of Runes is a great way to make your opponent’s pinpoint removal awkward and can also help get past blockers. Cradle of Vitality can combine with the lifegain to make lifelink creatures even bigger, and boosting Vona big enough to threaten a commander damage kill is quite nice.

While we’re not playing Vampire tribal, since our Commander is a Vampire and there are a number of other Vampires we’ll want to play, we can probably bank on having one on the battlefield to make these cards gain some additional value. In particular I’d love to equip Vona with Blade of the Bloodchief, since Vona will be destroying creatures and adding +1/+1 counters to Vona makes it more of a threat and feeds life back to you.

If everything goes according to plan, you’ll be able to use Vona to your heart’s content, but if not, we’ll want to have other options. Thankfully, white and black have plenty of fantastic options for removing most permanents. Vindicate even lets us nuke a problematic land if we have to!

I really like the Ixalan transformational cards, since they provide nice utility on the front side, and then extra mana on the back side while also giving you bonus utility. Conqueror’s Galleon is quickly becoming a favorite; Vona’s power is just the right size to crew and its mana cost comes down the turn after you cast Conqueror’s Galleon.

Scuttlemutt is also a favorite and is quite handy here, since sometimes opposing creatures may have protection from black or white, which will nullify Vona’s ability to destroy them. However, Scuttlemutt can simply make Vona green to sidestep that problem. I love Scuttlemutt!

Lots of good stuff to choose from in Orzhov and artifacts for utility. Phyrexian Reclamation is a fantastic card in any black deck but does a ton of heavy lifting if you’ve got plenty of lifegain in your deck. Sun Titan is more expensive, but wow does it do great work in Commander. I don’t lean on much graveyard recursion in this deck, but having a touch of it is always handy. Vona and all the other ways we have to destroy creatures means that Skirsdag High Priest is going to summon a lot of flying 5/5 Demons for us. So the white side of the coin is well-served, the lifegain in the deck should let Angelic Accord provide us with a bounty of flying 4/4 Angels.

Debtor’s Knell is a card I forget about a lot, but again, with Vona being a creature-killing machine, that should keep graveyards well stocked with options.

I noticed that I was making use of a lot of enchantments in this deck, so I found room in our precious three-mana slot for Crystal Chimes to get them back when our opponents sweep them off the battlefield.

What I really love about this list is that it’s very capable of keeping the battlefield clear of too many permanent-based crazy combos or overpowered cards. A lot of the time, when building Commander decks, you fill so many slots with on-theme cards that you don’t have much room for generically good interaction cards, which leads to games where you just get run over when you don’t draw the interaction. I don’t see this list running into that problem.

What do you think? How would you build your Vona, Butcher of Magan deck differently?