Dominaria is almost here! I hope everyone who wanted to had a chance to play in a Prerelease this past weekend.

As per usual, I attended our local game store’s midnight Prerelease and played four rounds. My Sealed pool was a little odd, with no mana fixing to help the Jund color combination that would accommodate a few of my bombs. The only color I was relatively deep on was white, but that was counting two copies of Benalish Marshal, which aggressively discourages splashing another color. Round 1, I got crushed by a four-color mythic rare deck that I couldn’t really do anything about, but I won the remaining three rounds against more normally powered decks.

One of the cards I was bummed not to be able to play in my Sealed deck was this fine specimen. 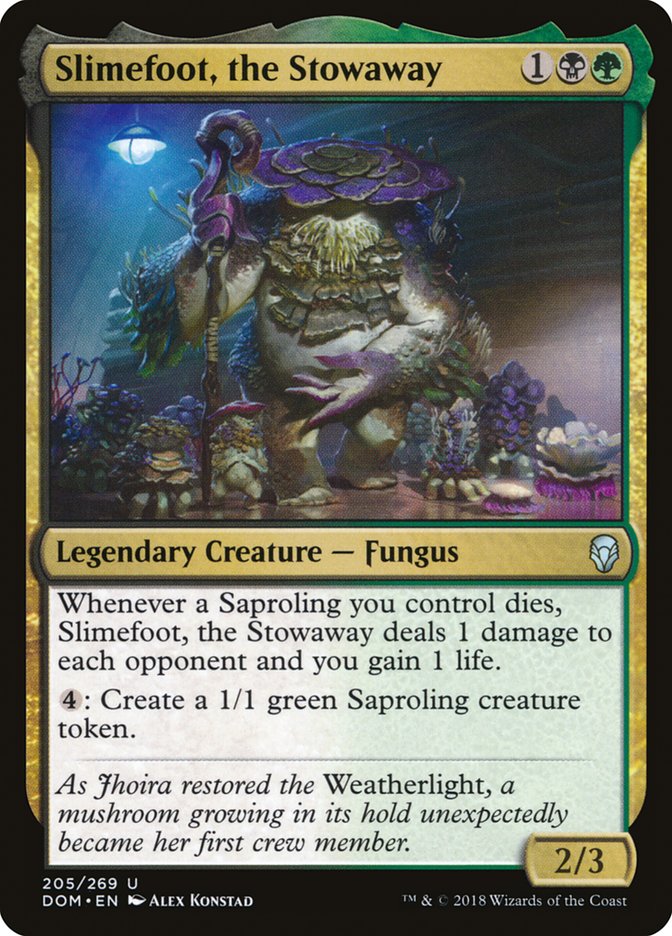 What’s interesting about the return of Saprolings is the timing in how sets are designed now. Just think back to Ixalan—we had Dinosaurs, Merfolk, Vampires and Pirates pushed in a tribal way, but had to wait for Rivals of Ixalan to realize their full potential. Dominaria is one and done, so I was curious to see if we had enough Saproling support to build a full-fledged Saproling deck for Standard.

Good news, Virginia. We can!

Fungal Infection and Vicious Offering are some great new removal options that are particularly awesome in a Slimefoot deck.

Vicious Offering is like Moment of Craving but with the upside of going large if you sacrifice a creature. Slimefoot gives you a life buffer from dying Saprolings already, so I really love that you can sacrifice an extra Saproling lying around to give a creature -5/-5 for just two mana, which is a handy way to take down an indestructible Hazoret the Fervent or Rhonas the Indomitable.

Turn 2 Saproling Migration into Turn 3 Yavimaya Sapherd floods the battlefield with enough bodies to trigger Growing Rites of Itlimoc’s transformation into Itlimoc, Cradle of the Sun. If you’ve got a land that taps for mana equal to the number of creatures you have you can dump it into Slimefoot to churn out even more creatures. “Growing Rites” also seems like a flavor win.

At the top of the curve are four copies of Tendershoot Dryad, and since this deck should be able to get the city’s blessing easily, that’ll equate to an impressive battlefield presence quickly.

Will this be Tier 1? I don’t think so, but I think anything with this amount of solid removal and some powerful synergies can potentially hold its own. I’m looking forward to giving it a try.

If you’re not 100% sold on Slimefoot for Commander, how about Brawl?

What’s interesting about a Slimefoot Brawl deck is that you’re a bit stretched on the Saproling theme, even including Saproling cards we didn’t include in the Standard deck. That’s mitigated somewhat because you’ve got Slimefoot available from the Command Zone, so you can always cast Slimefoot on Turn 3 and then start cranking out Saprolings on Turn 4.

The upside of being light on Saproling and Thallid cards, though, is that you can splash quite a few other cards for fun-ofs, like some of the Sagas, Vehicles, and the original Saproling gangster Verdant Force. And our course there’s Creeping Mold for more flavor win.

What’s fun, though, is building a Slimefoot deck for Commander, which lets you dig deep into the many Thallid and Saproling cards that have been printed throughout the history of Magic. Not having white in the deck leaves some of those cards sitting on the sidelines, but I do like being able to focus the deck a little bit better with just green and black. Also, Slimefoot lets you overextend into mass removal because it can inflict pain on your opponents and give you life in return.

Let’s see what a G/B Slimefoot deck based on Saprolings and Thallids would look like.

There are quite a few Thallids and Thallid enablers over the years for us to choose from. Some are clearly better than others and I’ve tried to choose those here. Utopia Mycon comes down quickly and can nicely convert Saprolings into mana, and Psychotrope Thallid converts Saprolings into cards.

Sporesower Thallid lets you accumulate spore counters more quickly on all your other Thallids, and Sporoloth Ancient lets you convert spore counters into Saprolings at a more efficient rate. Then there’s Thelon of Havenwood, which incentivizes you to just keep racking up spore counters to make your Thallids into giant creatures.

Thallids aren’t the only things that make Saprolings, so we’ll want to include a good number of those. I’ve got most of my favorites here, especially old-school Verdant Force and more modern riffs on it Tendershoot Dryad and Verdant Embrace. Nemata, Grove Guardian and Verdeloth the Ancient do a nice job of being Saproling “lords.”

If you’ve got Doubling Season, you definitely want to find a spot for it here. Not only is it a huge help getting those spore counters going, but then you double the Saproling output. What more can you want?

As a public service announcement, in my observation the rate of Saproling tokens is quite high compared to the other tokens in the Dominaria pack. There’s a reason for that. Wizards wants you to play lots and lots of Saprolings. I’m happy to oblige.

Outside of the Thallid stuff and Slimefoot, there’s not too much specifically keyed to Fungus or Saprolings, but we can certainly make use of some of the generic tribal stuff. We’d key Herald’s Horn and Door of Destinies for Fungus. I like that Chameleon Colossus can benefit from both the Fungus-boosting and Saproling-boosting cards, and we can use Runed Stalactite to turn any Fungus into a Saproling too, or even give it to Thelon of Havenwood or some of the other non-Fungus, non-Saproling creatures in the deck.

If there’s one thing Saprolings do well, it’s dying for profit, and there are certainly a fair number of cards that appreciate that. We can certainly go seriously old-school by casting Natural Order, sacrificing a green Saproling, and putting Verdant Force onto the battlefield like it’s 1997 all over again. Of course, a more recent awesome line of play is sacrificing five tokens to Westvale Abbey to transform it into Ormendahl, Profane Prince.

I didn’t go too deep on the ramp because I wanted to ensure I had a ton of Thallid and Saproling cards, but we certainly want some. Slimefoot makes an excellent mana sink. Cryptolith Rite can potentially generate a ton of mana, as could Growing Rites of Itlimoc. If you’ve got a Gaea’s Cradle, you’d definitely want to include one here too.

I always love to include Fecundity in a Saproling-heavy deck. There are a ton of cards that sacrifice Saprolings for profit, so adding a card drawn for each Saproling death more than makes up for the benefit your opponents might get. Plus, again, it’s a flavor win. There are plenty of other card drawing options and I’ve picked some of the best for this style of deck.

Our synergy deck doesn’t leave too much in the way of extra slots, but I didn’t want to scrimp too badly on removal spells. Dying Saprolings should easily trigger the morbid on Tragic Slip and Malicious Affliction. I always like to include cards like Song of the Dryads when I can—sometimes it’s the best way to handle an otherwise problematic commander. Speaking of, I think that card is due a reprint in an upcoming Commander product, don’t you?

There are a few ways already in the deck that pump the team, but it wouldn’t hurt to add more. Beastmaster Ascension is the best of the bunch, easy to trigger and turning your go-wide strategy into a lethal battlefield presence in a hurry. And Triumph of the Hordes on your swarm of Saprolings is just good, clean living.

So, what do you think? Is Slimefoot the real deal? Do you think the Standard deck has any legs, or whatever a Fungus might have for transporting itself? What do you think of the Brawl deck? What sort of cards am I missing from Commander Slimefoot?

For more Dominaria Commander goodness, be sure to check out Sheldon Menery’s Dominaria Review for Commander, Part 1. He goes over white, blue, and black and let’s just say he was probably more interested in my Whisper, Blood Liturgist deck last week than the one I built around the incredible Yargle, Glutton of Urborg. Know this, Sheldon—you’ll be seeing what the Yargle fuss is all about at SCG CON in June, my friend!