Ramp is a time-honored tradition in Commander. It makes sense—the splashier, more impactful cards in a multiplayer game tend to be more expensive, so being able to cast them earlier helps. If your Commander costs a lot of mana, you will usually ramp up the number of ramp spells in your deck to help cast it on time.

There is a tradeoff, though: ramp spells take space in your deck, and the slots you use to ramp are slots you lose for other things, like good creatures, utility spells, removal, and win conditions. If you’re in the late-game and you’ve got all the mana you could possibly want, the last thing you want to rip off the top of your deck is a ramp spell.

That’s one of the reasons I think the transform cards from Ixalan block are so good: they do stuff for you before they transform into a land, so if you draw one late it’s rarely going to be a dead draw. Building a Commander deck with ramp spells can be a delicate balancing act.

relating to an early stage in evolutionary development; primeval.

an event causing great and often sudden damage or distress; a disaster. 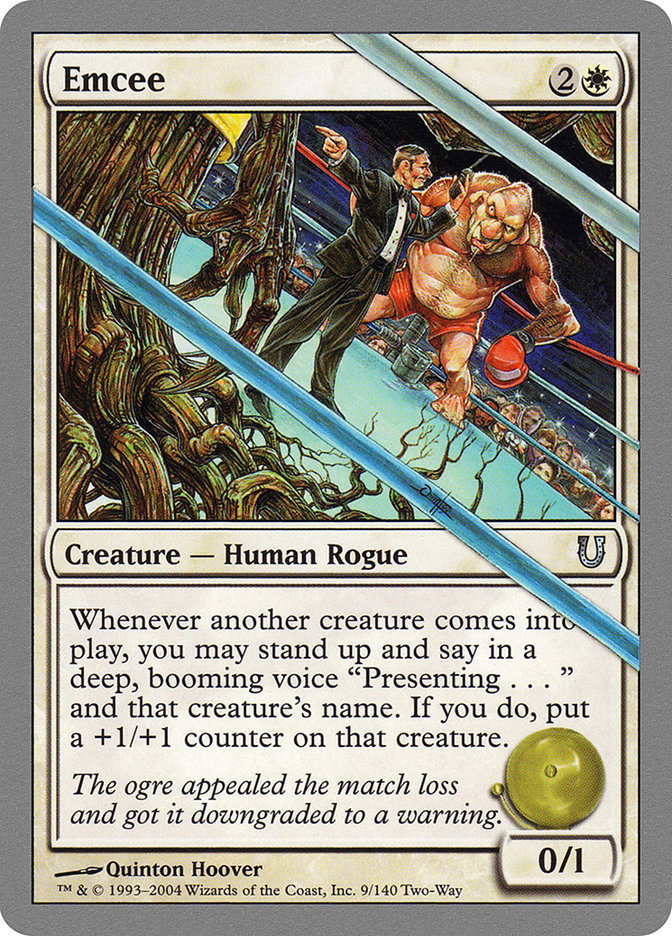 You can almost hear a professional wrestling announcer going through the synonyms when pumping the crowd up for the appearance of this fearsome Elder Dinosaur.

“From the deepest, darkest jungles of Ixalan, the original disaster, the first tribulation, the earliest catastrophe! Make way for Zacamaaaaaaaa, Primal Calamity!” 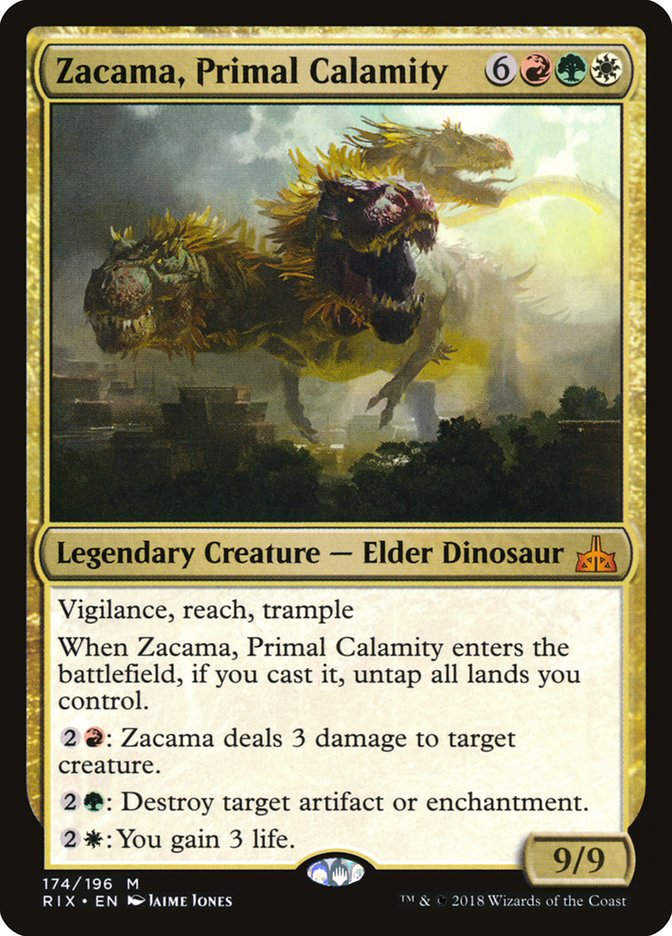 Yes—Zacama, Primal Calamity is our very own “Ramp Lord.” And wow, what a payoff for getting to nine mana! Getting to untap all your lands is huge, and if your lands provide you with more mana than it takes to cast Zacama, you’ll end up netting extra mana. Not only that, but Zacama gives you lots of options to use that mana: dealing damage, gaining life, or destroying artifacts and enchantments. What more could you want?

Oh, wait, there’s more: vigilance, one of the best abilities in Commander, letting your giant 9/9 play offense and defense. Reach, to help on the defense. And trample, to help on the offense. This is the kind of Commander that commands the battlefield.

Okay, if we’re going to be Ramp Tribal, we need lots and lots of ramp spells, and since we’re green, we can roll super-deep. Krosan Verge, Myriad Landscape, and Terrain Generator give us ramp without even costing nonland slots. I’ve squeezed in a bunch of the Ixalan block transform cards, the usual ramp suspects like Rampant Growth and Cultivate, and even tapped one of my favorite cards from Standard, Hour of Promise. Near the top of the curve, we’ve got all-stars like Mirari’s Wake, Regal Behemoth, and Zendikar Resurgent, which can easily net you extra mana with Zacama’s untap ability.

Selvala, Heart of the Wilds is particularly awesome due to the design of Zacama—its nine power translates into nine mana of any combination, which is nicely divisible by three for any of Zacama’s abilities.

Okay, even though we have all the ramp, it’s probably a good idea to protect Zacama and avoid the Commander tax when we can. Sword of Light and Shadow provides protection from white removal like Swords to Plowshares and black removal like Tragic Slip. Breaking out the Glory tech, assuming it’s in the graveyard, you can give Zacama protection from any color. Conveniently, Glory’s activation cost is three as well! Sword of Feast and Famine provides protection from black removal, but even more important is that it lets you untap your lands when you connect, which could be a huge amount of Zacama activations. That’s why I’ve included Bear Umbra as well.

Of course, nothing protects quite as well as hexproof, so I’ve included a fair amount of that too. I even squeezed in Archetype of Endurance, which is usually too expensive for consideration in a lot of decks, but hey, we’re ramp tribal here.

Even the best-laid schemes o’ mice and men gang aft agley, so if we’re going tribal ramp, it seems a good Plan B would be to recruit a bunch of land-matters spells. We’re packing landfall spells like Retreat to Kazandu and Avenger of Zendikar, powerhouse card Tireless Tracker to make oodles of Clue tokens, and one of my all-time favorite cards, Ulvenwald Hydra, which can simply be a gigantic threat.

Zacama does a good job of covering the removal bases, but we’ll want some outs in case someone plays a card like Pithing Needle to shut down Zacama’s abilities. The buyback costs for Shattering Pulse and Allay are already reasonable without considering all the crazy ramp we’ve got.

Basilisk Collar is already one of the best one-mana cards in Commander, but I can’t imagine a better creature to equip than Zacama.

I do have some room for some good stuff cards, so I’ve gone with some card selection and advantage with Skullclamp, Sylvan Library and Seasons Past. Invulnerability and Spike Weaver can help keep you from dying before Zacama gets online.

Seedborn Muse is already one of the most absurd cards in the format, but once you’re getting to untap all your mana each untap step with Zacama on the battlefield, I’m pretty sure your odds of winning go up quite a bit from that position.

What do you think? How would you go about building this deck differently?

For more Commander perspective on Rivals of Ixalan, make sure to check out Sheldon Menery’s do over of Prime Speaker Zegana featuring some cool Merfolk from Ixalan block. And if you ever feel that Commander decks are filled out with too many expensive cards, Mark Nestico brought out the budget guns in Ballin’ on a Budget.

Last but not least… did you hear about the Commander Celebration going on at SCG CON June 8-10? I’ll be there, along with Sheldon and Jonathan, Stephen, Justin, and Jeremy from Commander VS. If you’re within driving distance of Roanoke, Virginia, come down for a fantastic fun weekend and play Commander with us! I am super-stoked and hope to see a lot of you there!