The movie Alien came out in 1979. While many of you hadn’t even been born yet, I was twelve years old, but that was certainly too young to go see it in the theaters. I had however just started reading horror fiction (namely Stephen King) along with science fiction and I’d heard just little, tantalizing things about it. I knew it was a scary science fiction movie and couldn’t wait to see it. Eventually.

About a year or two later, my neighbor Rudy, who was a year younger than me, invited me over to his house one weekend afternoon. His parents had gotten HBO on cable TV – something that was really new to us in the early 80s – and he wanted me to come over to watch a movie with him. Because he didn’t want to watch it alone.

Because the movie was Alien.

Rudy ended up watching a lot of the movie while standing half in, half out of a doorway across the room, so he could quickly put a wall between him and what was going on in the movie. Me, I was riveted to my spot on the sofa directly in front of the big TV, hugging one of the sofa cushions to my chest to provide some small measure of protection. It was totally creepy, totally scary, and totally shocking – and nothing more so than the iconic chest-burster scene where the monster erupts from its host in a most spectacularly lethal fashion.

I’ve been a big fan of the franchise ever since. Which is why when the emerge mechanic was unveiled, I immediately loved its horrific, Alien-inspired flavor.

When Wizards of the Coast was previewing cards and mechanics of Eldritch Moon, Mark Rosewater said this about how they came up with the emerge cards:

If Emrakul’s presence was a big part of the set, we wanted to have a mechanic that reflected it… The cards needed to have a veneer of Eldrazi to them without circumventing the color pie. We didn’t want every color to use every card with this mechanic. The inspiration to solve this problem turned out to be Ninjas.

More technically, the ninjutsu mechanic from Betrayers of Kamigawa. I designed ninjutsu as a mechanic to reflect the sneakiness of Ninjas. They’re tricky masters of disguise (using magic, not an elephant suit, which was a popular joke at the time) such that you don’t often see them coming when they attack. Sam Stoddard, the lead developer for Eldritch Moon, is a big fan of ninjutsu and thought that maybe it might hold the key to a solution. The new mechanic was called “emerge.”

The first change he made was to add a sacrifice cost to the ability. (Ninjutsu, in contrast, returned the creature to your hand.) This gave it a bit of an Alien chestburster feel, that the mutated creature came forth out of the original creature. Originally, emerge worked like ninjutsu, as you could only use it on an attacking creature—but that ended up being a little too limiting. It was changed so that you could use the activation any time you could cast the creature.

The colored activation was the key to solving the “no devoid” problem. Each creature with emerge is colorless, but can be cast for one less total mana if you use colored mana and a sacrifice. This makes the cards playable in any deck but preferable in the proper color. The emerge ability only shows up in blue, black, and green.

While a lot of virtual ink has been spilled commenting on emerge’s impact on tournament Magic, I’ve been pondering how to best use the mechanic in Commander. I thought back to the explanation above from Mark Rosewater, and the mechanic’s ties to ninjutsu.

And then it became clear to me: I needed to build a deck with emerge Eldrazi… and Ninjas! Talk about a fantastic flavor mashup. Is my Eternal Witness a Ninja in disguise sneaking past to murder you? Or is it host to some horrific Eldrazi monster waiting for the right time to burst out of its host body and wreak havoc? Somebody get Quentin Tarantino on the phone; I’ve got his next movie halfway written here. 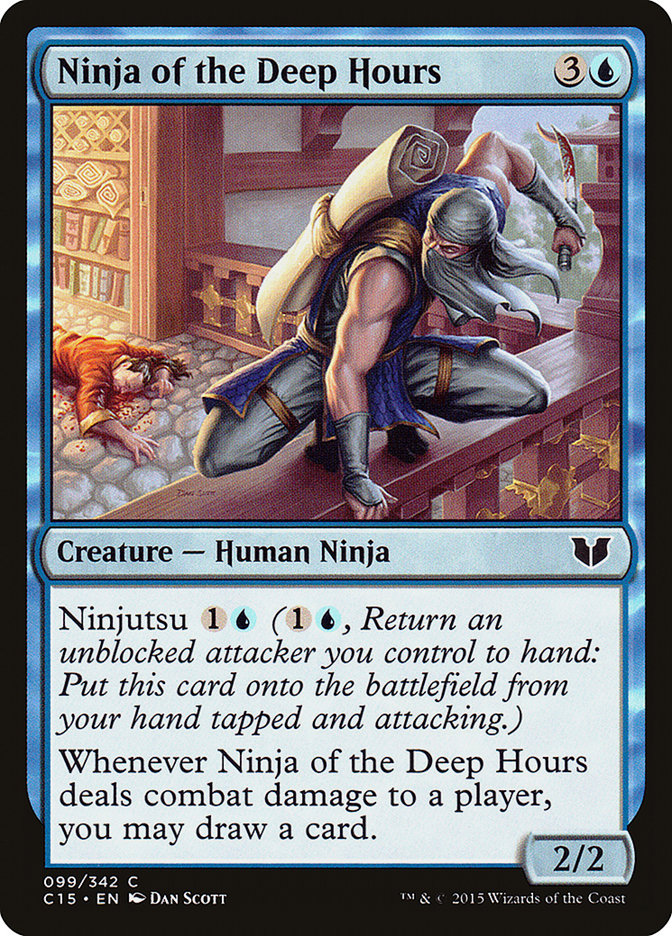 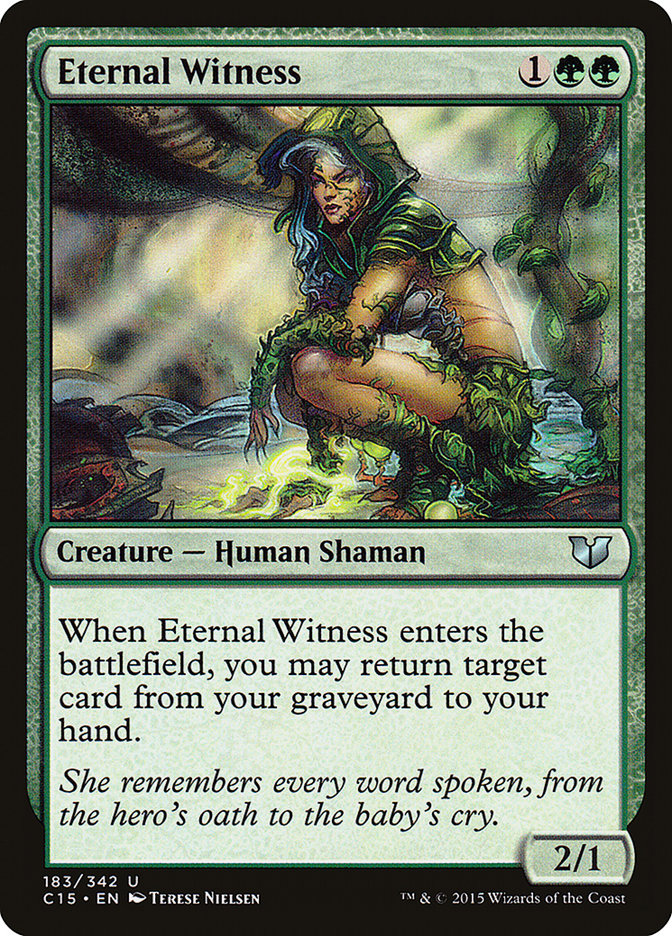 The more I thought about it, the more it made sense from a mechanical angle as well. Decks with Ninjas want value creatures that you can return to your hand and recast. Decks with emerge also want value creatures, because you’ve already extracted value from them entering the battlefield, so sacrificing them to emerge becomes less of a liability if the emerge creature is swiftly dealt with.

Ninjutsu also tends to put creatures onto the battlefield for less than their actual mana cost, which can in turn make paying the emerge cost easier. Further, the ninjutsu ability can put emerge creatures back into your hand ready to burst forth again for more value and more flavor fun.

Since the emerge ability only shows up in blue, black, and green and I want all the emerge creatures in the deck, we’re going to be in a Sultai wedge deck. None of the Sultai legends really fit the mechanics all that well, but I decided to go with The Mimeoplasm since it kinda-sorta fits the theme of transformation. Also, having The Mimeoplasm copy a dead value creature while getting +1/+1 counters from a huge dead Eldrazi emerge creature seems like a pretty good combo if your opponents’ graveyards aren’t offering better options. 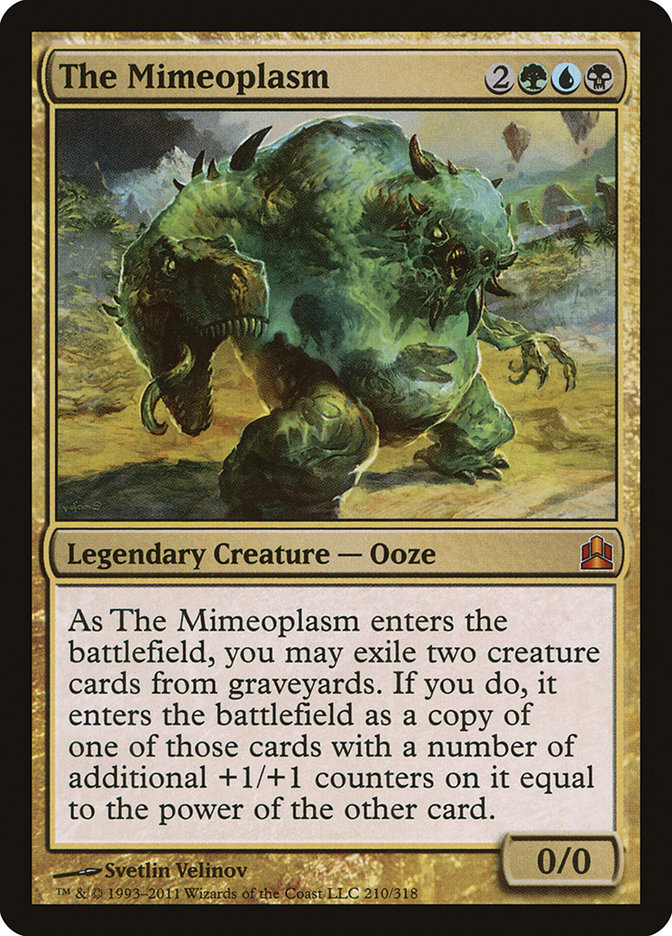 First up is the gang that got this party started in the first place, our chest-burster buddies. Some of these are obvious home-runs, pushed to Constructed power levels: Decimator of the Provinces, Elder Deep-Fiend, and Distended Mindbender. Some of them are of limited use in multiplayer. But they all do what we want them to do—explode out of our creature cards in horrific fashion!

Foul Emissary gets included in the mix as the lone card that’s built to support emerge. I actually debated not including him since his enters-the-battlefield ability spoils a little bit of the mystery inherent in the flavor I’m going for here – and I suppose I could always “fail to find” a creature from it – but getting to squeeze out that Eldrazi token creature when I use it to emerge is just too sweet to pass up.

Similarly some of the Ninjas are pushed for competitive play, and some are just here to round out the theme. Even the worst of the Ninjas can help us squeeze more out of our value creatures. Ink-Eyes, Servant of Oni is particularly nice here, since she can steal dead creatures from your opponents’ graveyards that you can use to fuel emerge. 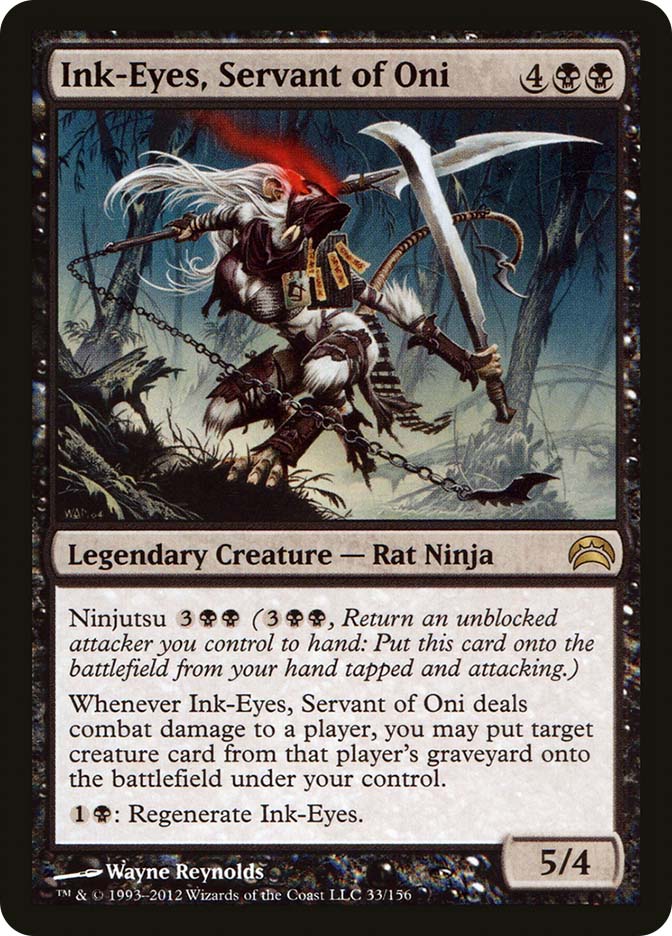 Once I’d dropped Ninjas into the mix, it was time to fill out the curve with good value creatures. There’s certainly no end to the good choices found in green, black and blue. The all-star of value is no doubt Thragtusk, which gives value entering the battlefield as well as leaving it, whether it’s through ninjutsu or emerge. Whirler Rogue seems to be particularly fantastic supporting our Ninja plan. Offalsnout’s flash and evoke abilities seems like a pretty good combination to surprise-enable the emerge creatures that have flash, costing just one mana but “paying” you three mana towards emerge if you time it right on the evoke trigger. 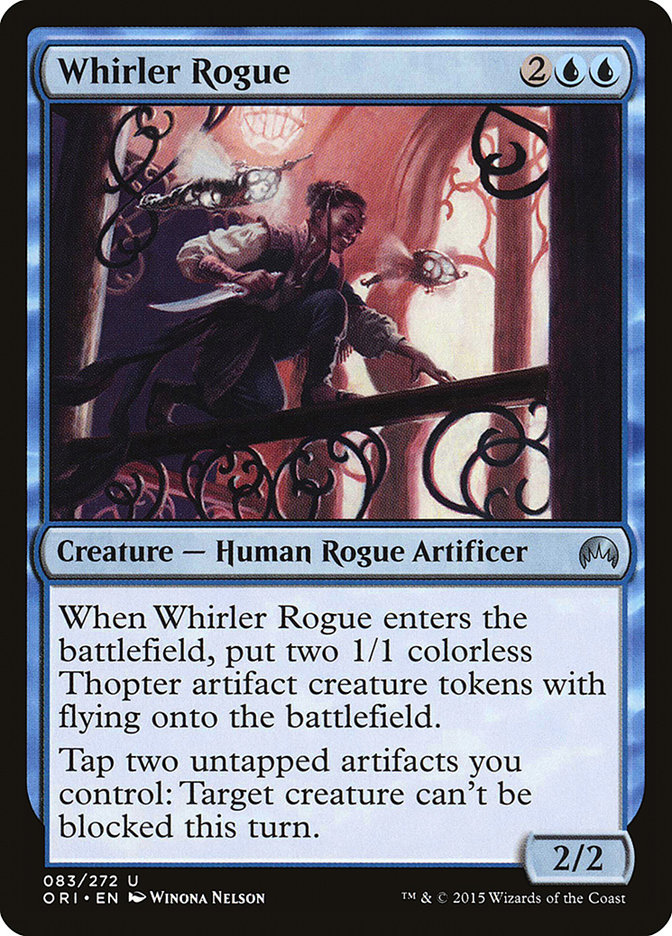 Baleful Strix and Skullwinder are value creatures that make awesome ninjutsu targets since their deathtouch makes it unappealing for opponents to block, but we need some other options for slipping past potential blockers.

It’s a pretty good idea to have spot removal even in multiplayer games for emergencies, but it’s even better here, since you can take out a creature your opponent was counting on to discourage attacks. Icy Manipulator is a reusable way to mess with blockers.

Rogue’s Passage can make anything unblockable but it’s expensive to activate and you’ll already be needing extra mana for ninjutsu or emerge. Still, having it in a land slot is basically free for your late-game needs. Vela the Night-Clad was designed to work well in Ninjas and gives all your creatures intimidate, which can be quite helpful in finding free attacks, though she can get a little help from Scuttlemutt, who can change colors of either your attacker or a blocker to help slide through. The life drain trigger that works well with ninjutsu also works with emerge. 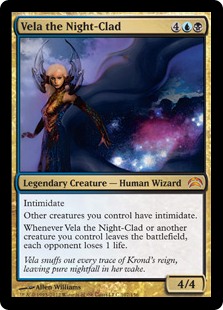 As fun as it’s going to be to have our Eldrazi aliens burst from the chests of our value creatures, there are going to be times when you just want to cast them normally—like, say, the late-game when you have plenty of mana. To help facilitate that, I figured we should include Eldrazi Temple and ways to find it. Also, we certainly don’t want people’s counterspells to spoil our chest-bursting fun, so finding a Cavern of Souls set to “Eldrazi” seems like a good option to have as well. 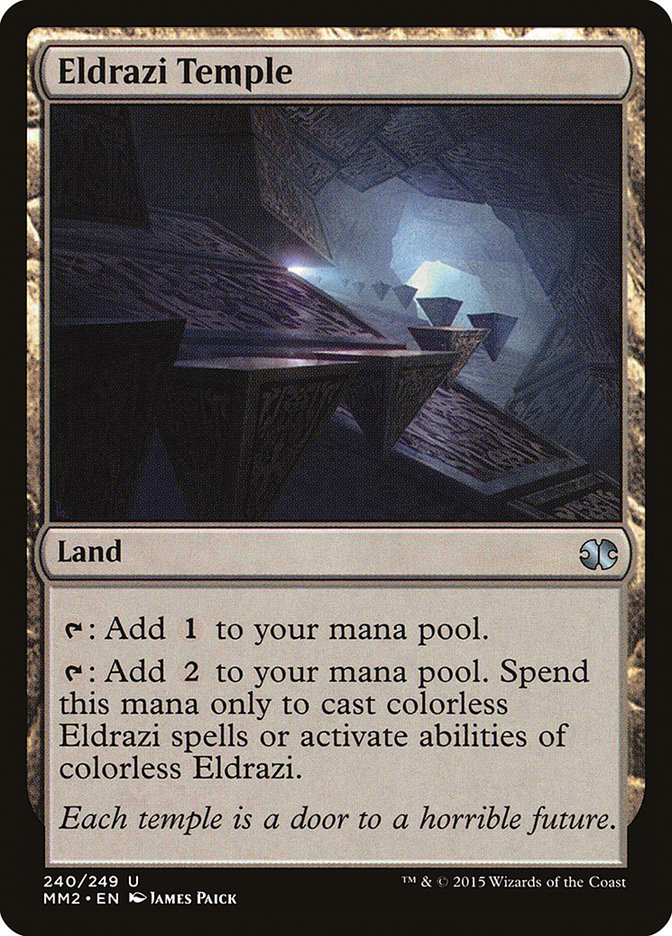 Okay, so here’s what I’ve got cooked up:

So what do you think of this Ninja/Alien mashup? Are there any cards I overlooked? How are you looking to take advantage of emerge Eldrazi in your Commander decks?