One of the challenges to navigating the miles of winding paths contained in the different atriums of various climates is just how long it can take to get from point A to point B. For instance, there’s a McDonald’s across the street at the end of the driveway. It’s also more than a mile walk to it from the hall itself. Despite this, the venue is well worth it, at times seeming almost like a cross between Vegas and a Final Fantasy video game. 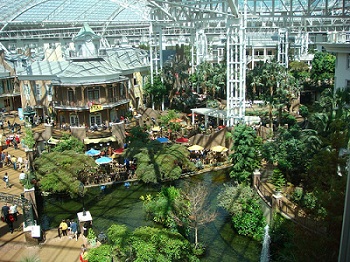 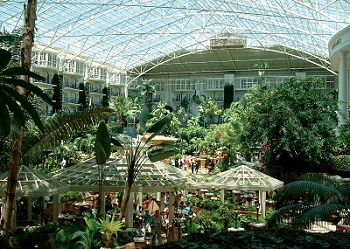 Having opted for the sleep-in special, I was free to explore the local nightlife a little bit Friday night. A couple of friends of mine, Kate Hebert and Stephanie Mayer, had picked me up at the airport, and we were on the prowl looking for fried chicken. We were directed to the Caney Fork River Valley Grill, an establishment billing itself as “the place for campfire food.”

They appeared to have a variety of fried food, but where was the chicken? Chicken strips do not count as fried chicken. Our server suggested, “We can take some of the boneless chicken and fry it.”Â

Wait, that sounds like fried chicken, but you seem hesitant. “No, it’s good and it’s chicken, hun.”Â

Of the people at our table, it was Lissa Jensen who appeared to have had the most success, as both her alligator and her frog legs were excellent. Campfire food, indeed.

We headed back to the Opryland, itself, looking to meet up with fellow mages. After walking past a senior prom, we ran into Owen Turtenwald and his posse, Zac Hill and his posse, and Ben Rasmussen and his posse all converging. We tried to enter Fuse, a dance club inside the compound, only to discover that this particular dance club only has dancing on Saturdays. It was next door to the Irish Pub, though there was not to be much of a late night as quite a few of us selected going to bed at a reasonable hour rather than staying out till close.

The following morning, the tournament began without too much of a hitch. It was a bit slow in the early rounds, but the sleep-in special was executed absolutely perfectly. Major props to the tournament organizer, Donnie Noland, for taking the time and resources to do it right. They had people quickly filling tables to register in-sync, firing every 10 minutes with judges supervising. Decklists had been double-checked, everything went smoothly, quickly, and professionally, and it was a great experience all the way around. On top of everything else, they only charged $10 for the special as opposed to $15. Hopefully this is a sign that the technology is being perfected.

My pool was quite weak though a bit interesting to work with, as it had a variety of possible builds. Each of these was very close to each other, and each was quite weak. Rather than go through my rounds (as text-based Limited coverage and analysis is the worst), let’s take a brief look at some Standard ideas!

The most requested deck to be discussed for the moment from last week was U/B Zombies. The premier aggro deck of the format (probably), U/B Zombies has been consistently one of the better performers since Pro Tour Dark Ascension. If I were to play U/B Zombies, I probably wouldn’t do anything too unusual. For instance, perhaps:

That said, there are a couple of other possibilities to explore. What about Bloodline Keeper? He offers kind of an interesting angle. Not a ton of people use Sword of Feast and Famine, but I like it against U/B Control. Still, what if Mana Leak is where you want to be? They rely so heavily on Black Sun’s Zenith and Grave Titan; a well-placed Leak could be game ending.

Another possibility is to splash Lingering Souls. After all, how much white mana do you really need? Four Isolated Chapels is a start, which could obviously be supplemented with some Evolving Wilds, a Plains, and an Island. However, what if instead of more white mana, we used more discard outlets? With more Liliana, maybe even Smallpox, we could find ways to discard Lingering Souls rather than cast it the hard way. After all, if you just discard it it’s like a sorcery for 1B that makes two 1/1 fliers and draws a card. That’s a pretty good deal (and great against Delver decks and control).

Speaking of Lingering Souls, how about WotC banning Lingering Souls and Intangible Virtue in Block Constructed? Crazy, right? This move isn’t totally without precedent. Wizards of the Coast banned Time Spiral and Windfall before the Saga-Legacy Block PT. Still, it shakes things up quite a bit, though I suspect most would agree for the better. Block has been getting played a bit online, where the metagame is well over half Tokens with one of the three other major decks being Boros, a R/W “aggro” deck that also contains Gather the Townsfolk. The other two decks? Jund (with about 77 ways to kill tokens) and U/G Dredge.

I’m definitely pleased that WotC didn’t let this block format go the same way Mirrodin Block Constructed went last year. Tokens was already looking like Tempered Steel, and Block formats are especially vulnerable to this. Does this mean we can play Grixis…?

Back on the Zombie tip, it’s very possible that what you want to do is cut the blue. Gerry Thompson listed a version of B/r Zombies here that looked like a reasonable place to start (though I’m not in love with Dross Hopper):

The Dross Hoper does make Brimstone Volley and Skirsdag Priest better so he’s worth a shot, but we only have one and two copies of a number of other solid cards. One thing I really like about this list is how much faster it will come out, not being glutted with three-drops as Zombies is prone to be. Is it possible we want both splashes? Unlikely, but here’s a possible smooshing:

The other concept that was voted up in the comments last week was Junk Tokens (just in time to be banned in Block). The planeswalkers, Sorin/Garruk/Elspeth, are all potent token-making engines and suggest a bit of a “planeswalker-deck” feel.

This attempt is a modest blending of a sort of G/W Tokens style with some influences from the Frank Lepore style of Tokens that makes use of the Green Sun’s Zenith + Strangleroot Geist + Primeval Titan package. It’s very hard to support Green Sun’s Zenith for Titan without tons of ramping, but the ability to go find Strangleroot Geist for 2G makes Green Sun’s Zenith arguably still the second best three-drop we can play behind Lingering Souls. It is not a “token-maker” per se, but it’s a fantastic way to reliably have guys that are getting buffed from Swords or Sorin (ala Doomed Traveler). It’s slightly awkward with Gavony Township, but that’s a pretty corner-case scenario.

I don’t know that this is the right place to be positioned at the moment, but the prospect of merging Tokens + Planeswalkers with Strangleroot Geist/Titan is kind of exciting, since those are two strategies with very different good and bad matchups. It’s possible they complement each other, giving you points where you need them. My concern is whether the mana in this beast is stable. It is probably “passable,” but when decks like R/G and U/B and Delver have such good mana bases, passable isn’t that exciting. It might be even more of a stretch, but it sure would be sweet if there was a way to build this deck so that it could use Curse of Death’s Hold. I don’t know if that means going more ramp-esque or what, but Curse is so good against some opponents (where we could use the help).

After being eliminated from GP Nashville at 6-3, including relatively few competitive games, a pretty thick crew decided to give Fuse another chance. The prom being held seemed to stretch across the compound. Eventually, we deduced that there were actually two more proms going on.

Fuse turned out to be crazy fun. There were several dozen Magic players, a few random prom-escapees, a cougar convention (selling jewelry, as always), what appeared to be almost two dozen senior citizens in green drinking a lot, and several dozen 20-30 year old women who seemed to be part of a group, leading to a 3:2 women:men ratio.

Fuse was a restaurant during the day, so when it transitioned to dance club there was initially no dancing. Without Osyp Lebedowicz or Tom Martell, it wasn’t clear it ever would.

Fortunately, there are a lot of badass chicks who play Magic these days, and they took it upon themselves to start the party.Â

As the night progressed, things seemed to get more and more out of hand. Inside the club, the dance floor was steadily climbing from PG to Rated R (showing no signs of stopping). Outside the club on my way to the restroom, I saw a teenage boy in a suit first kiss and then slap (!) another boy, saying he knew the boy cheated on him with Sara. Adding to the surrealism, a boy directly behind them was wearing a giant foam cowboy hat with *NSYNC’s “Bye Bye Bye” blasting through the open doors of their party.

Abruptly, the lights came on at 1:20 AM, and the bouncers began ushering everyone out. When asked why the club was closing so early when bars and clubs can serve till 3 in Nashville, they blamed the dancers who had taken their clothes off. Why not just kick them out? Well first, they’d tried that. Second, there were too many of them. Third, they were getting back in, and the crowd was growing unruly.

From there, our caravan made its way to the promised land: a karaoke bar across the street (aka a mile away). Have you ever seen The Prodigy music video for Smack My B*tch Up? I can’t link directly to it because the content and language is too graphic; however, the video does a very reasonable job of summing up the rest of the night (from the perspective ofÂ one of the members of the crew…).

Sunday was filled with random drafts, mingling, exploring the Opryland, and cheering on all our friends in the Top 8. All in all a very fun weekend.

Donnie Noland – For running a top-notch event. Everyone was super happy with the execution, the judges, the venue, the prices, and the professionalism.

Lissa Jensen – For her first Top 8 after drafting two of the sickest decks ever and making a miraculous comeback in the second-to-last round.

Kate, Steph, and Matt Severa – For picking me up at the airport and putting a roof over my head.

Ben Rasmussen – For putting Kate and Steph in touch with me.

KFC – For bailing us out after the initial fried chicken mishap.

Tom Martell – For not coming.

Brian Kibler – For not coming.

Eric Froehlich – For not coming.

Gerry Thompson – For not coming.

Paul Rietzl – For not coming.

Matt Sperling – For not coming.

David Williams – For not coming.

On to the Invitational…