(My thanks to Eric “edt” Taylor, Zvi Mowshowitz, and [email protected] DeGraff for their input on this article.)

I’ve gone through a roller coaster of feelings about the M10 changes that were recently announced by Aaron Forsythe and Mark Gottlieb. There are a whole slew of them, and they are all basically an attempt to clean up the game and make it more successful. This is a goal that I’m definitely fully behind.

There are seven primary changes. Most of them are minor changes to how the game works, if not simply cosmetic changes. The one that has gotten the most note, of course, is the changing of combat damage.

If you’re like me, you’ve gotten used to saying “damage on the stack?” in combat. Of course, this leads to situations that are not particularly intuitive when it comes to a new player’s understanding of how the game works. One of the classics is my old favorite, Mogg Fanatic. 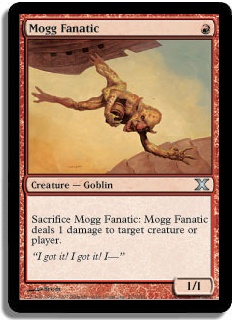 A common play would be to get this guy into combat, and then after damage is on the stack, sacrifice the creature in order to deal a second point of damage. For the new player, this would be particularly difficult to understand. “How can it do damage in combat?” they’d ask. “He’s dead!”

For many people, the answer to this problem was to say, “Well, learn the stack then!”

That’s all fine and dandy, but Wizards does have a legitimate concern: rules situations like this turn players off to the game, especially as they are making the transition to organized play.

With the new M10 rules, Mogg Fanatic will work a little differently. In essence, he’ll work like he did back before the change to 6th Edition rules, about 10 years ago. 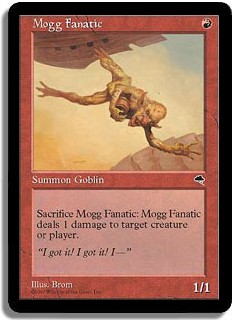 The solution that Wizards has come up with is to remove damage stacking (the so-called “Rule 5”). In other parts of the game, damage does not stack. A Lightning Bolt is on the stack, but the damage from it doesn’t re-stack. Once the Bolt has resolved, the damage is done. And so it is with combat.

The change happens, essentially, in the “Declare Blockers Step” of combat. During this step, once blockers are declared, if multiple blockers block a single creature, the attacking player chooses the order in which they are going to be damaged. Once this order is chosen, players have their last chance to add effects to the stack, and once both players have passed priority, damage is dealt, in order, so that at least lethal damage is dealt to the first creature in the line before passing to the next one.

In essence, it creates a “batting order.” When my opponent steals my 7/7 Mycoloth with Sower of Temptation, it is powerful enough to deal a total of 7 damage. If I put eight 1/1 saprolings, and a 2/2 and 3/3 Bramblewood Paragon in front of it, my opponent sets up the order in which damage will be assigned. We get a moment for our tricks, and once we don’t have any, we assign the damage, in order, with a minimum amount of damage sufficient to kill a creature before moving on to the next one. As Wizards says, “Even though you announce your damage assignments sequentially, the assignment process is treated as though it’s simultaneous.”

I’ve gone back and forth on this. Obviously this closes off a whole array of possible strategic plays (bounce in combat, et al.), but at the same time, it opens up another (ordering blocker order optimally based on expected tricks). I had come around to acceptance of the rule, and then I ended up having everything overturned on me by one Eric “Dinosaur” Taylor, Magic curmudgeon and deeply influential theorist.

What is the goal of this change?

Rule 5 clears this problem up. No longer will the newer player be confused by the dead creature dealing damage.

Of course, what happens to that new player when they’re out of combat and similar things pop up.

“I hit your Llanowar Elves with my Vithian Stinger. They die.”

“I respond to that by Eyeblight’s Ending on your Stinger.”

“No, they’re not. I killed the Stinger!”

Part of the problem, here, is that the game fundamentally uses the stack. In our desire to help out the new player, we’re helping to train them on a new intuition, which will also be not the way that the rules work.

Of course, we could work out a new rule to also make that intuitive. In the end, though, we’d essentially have to dismantle the stack. This wouldn’t necessarily be a bad thing for a well-designed game. It would, however, fly in the history of a ton of cards design, potentially rendering many of them actually inoperable, and requiring a massive patchwork of errata (a thing we’d like to avoid, of course).

Eric gets into this, using the example of dueling Tims (say, one Vithian Stinger facing off against another, for some reason):

You can explain to a noob all day long about Tim 1 and Tim 2, but unless he understands the stack, he’ll never get it.

So, are we going to destroy the stack, or are we going to keep it? As much as slippery slope arguments often seem inappropriate, it strikes me as a reasonable one to make, here.

There are other issues as well. Wizards writes:

If lethal damage is assigned to the second one, the attacking player can move on to the third, and so on. This works very similarly to trample.

Trample is one of the most difficult concepts in the entire game of MTG to understand. And now it is part of every combat step.

You want something non-intuitive? How about this: The attacking player assigns the order of blockers.

So, what is the goal?

The goal is clearly to deal with a common situation during combat that confuses new players.

There are many ways to accomplish this, of course. And many of them are ugly.

Wizards of the Coast’s fix is actually pretty ideal if and only if you have resigned yourself to the idea that damage should definitely not go on the stack. But is that necessary, if your goal is to make things intuitive for new players?

Consider one of Eric proposed solutions:

Create a new zone of the Battlefield (the new term for “in play”) called “The Combat Zone” (or “the Red Zone” or whatever pretty words you like). When creatures enter combat, they go into the Combat Zone. Creatures that are not in the Combat Zone do not deal combat damage.

So, what does this accomplish?

The new player would still benefit from an explicit understanding of the stack, just like they would at all stages of the game, but they no longer are going to be confused about why a creature that has left the battlefield (perhaps via Unsummon) is still doing damage. It’s gone!

“Players expect to be able to use their healing spells to save creatures that are actually going to die.”

The problem is, a lot of the time, this doesn’t actually work if the attacker doesn’t want it to. You want to save that creature, do you? Well, I’ll just deal enough to kill it.

With this alternate proposal, if my creature is going to die from damage, I get to decide to save it, period, with my Healing Salve.

At the same time, it preserves a more experienced players ability to at least use some tricks to save their own creatures. This idea of “saving” creatures is something that works intuitively to a new player. It also let’s abilities like Deathtouch not require their own vastly different rule, Rule 6.

Rule 6 is described as this:

“[…] Deathtouch allows a double-blocked creature to ignore the new damage assignment rules and split its damage among any number of creatures it’s in combat with however its controller wants to.”

This seems a bit messy. With the proposal from Eric, above, we wouldn’t need a special rule to make Deathtouch “work” as we intuit it should; it would just work.

On the other hand, if we’re going to have to live with Rule 5, perhaps we could do something that is a bit more… elegant… than the sloppily weaved together change to Deathtouch. On Randy Buehler blog, one reader had an excellent suggestion, which did just that.

Now that deathtouch is static ability I think that they make any amount of combat damage with deathtouch be considered “lethal damage” for the purpose of assigning damage, so with the new rulings on combat you can assign one damage to the first blocker, one to the second and so on, instead of making it an exception to the general rule.

This makes it easier to understand for new players, it makes sense flavor-wise, and removes a few sentences from the Comprehensive Rulebook.

Seems pretty simple. Define Deathtouch damage as “lethal” (“any amount of damage assigned from a creature with Deathtouch is considered lethal” or somesuch), and you get rid of the clunkiness of Rule 6.

This serves as a far more elegant solution to the corner case brought up by Rule 5 and Deathtouch, while only really introducing the comborific interaction between Deathtouch and Trample. But, hey, if you give your Wren’s Run Vanquisher a Loxodon Warhammer, I’m okay with it dealing 5 trample damage over a Chameleon Colossus of whatever size. Your mileage may vary.

What I hope, though, is that they reconsider Rule 5 altogether, and run with Eric solution instead. Eric solution solves the issue of their stated problem, of making combat lead “to a ton of confusion and disbelief”, but it keeps the game far less changed. If alienating players is a concern, what about the players who come back to the game to find combat radically different? Combat, under Rule 5, becomes more complex in many ways. If we can mitigate those things and solve their stated problem, isn’t that even better for the game?

In a lot of ways, I’m coming to this from the same space that I think that Stephen Menendian and Rich Shay did in their advocacy against power-based errata in the game. All of us want to be playing a game that has the best chance possible to last and be strong. We all want a game that is simple enough to teach, and complex enough to be deeply interesting.

I care about this game, and I want to see it doing well. If Wizards has decided that combat needs to be modified for the sake of the health of the game, I’m all for it. I just think that a more elegant, more robust solution exists. I have no doubt that the odds for them modifying their decision is deeply low, but I’m hoping that they’ll at least consider Eric “The Combat Zone” proposal and Arturo’s Deathtouch proposal.

Thanks for listening. I look forward to hearing your input.