So last Friday I was finally able to draft some Conspiracy! I was super-stoked already, but things got even better when I opened my very first pack and saw this beauty: 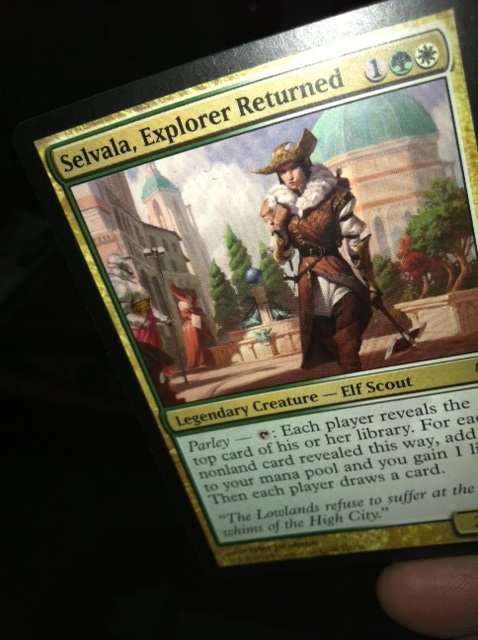 I just wrote about Selvala, Explorer Returned in my column last week, and then I opened her in my first pack of Conspiracy — how cool is that? I considered this my first WIN of the night. She’s obviously very playable, so I went about nabbing green and white picks and then opened up pack number two. 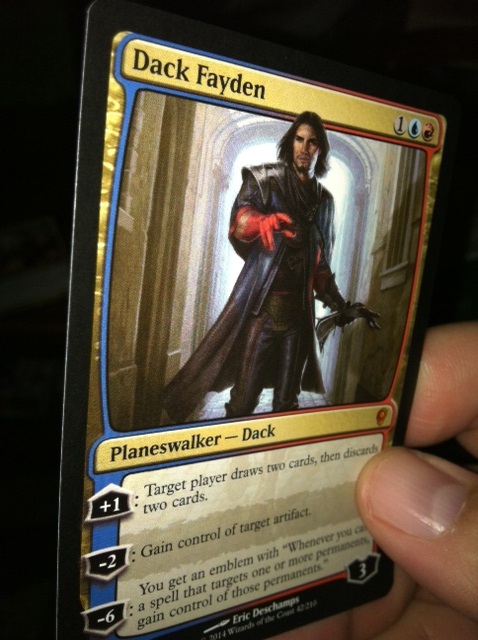 Well hello there! So I doubt I’d be able to splash a red/blue card into my green/white deck but I’m happy to tuck this away as a nice bonus to cover my draft three times over. WIN number two! 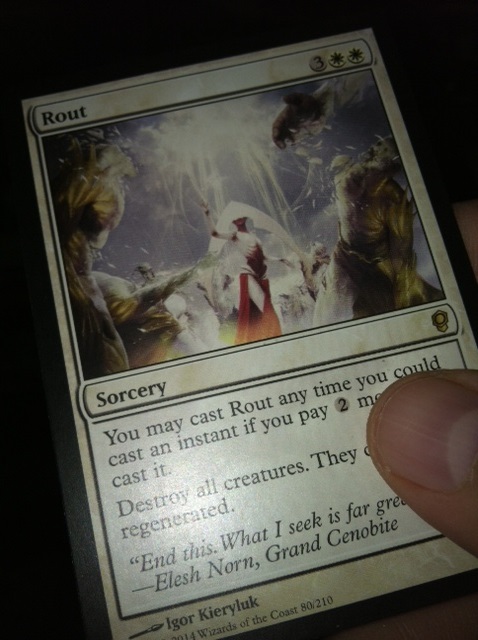 Then I get passed this beauty, and consider it WIN number three! I suppose there must have been a sweet Conspiracy in that pack.

Anyway, I end up crafting a pretty sweet green/white deck with a strong token theme as illustrated in the pic below: 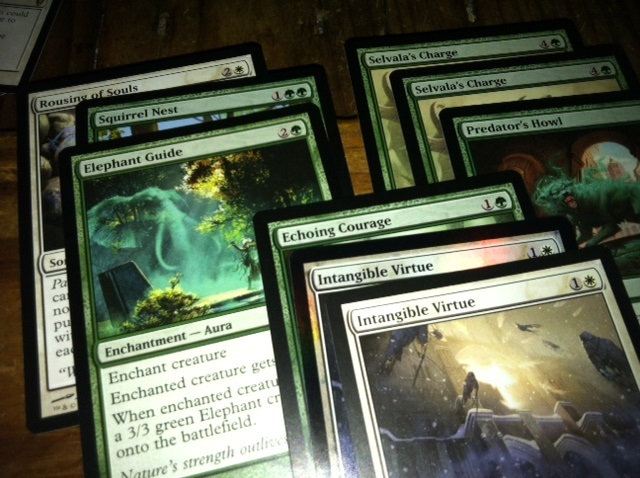 I go on to win the first multiplayer round, and then win the second to nab some extra boosters of Conspiracy and end a night of cascading wins. Did I use up all my luck? I guess we’ll see when I give Conspiracy another run this Friday.

Today I wanted to shine a spotlight on another Legend from Conspiracy. I’ve covered Selvala, Explorer Returned, and Grenzo, Dungeon Warden. Marchesa, the Black Rose is an obvious Commander powerhouse and a Legend I’m really looking forward to exploring here at some point, but she’s been covered already by two of my Commander compatriots Abe Sargent (Roses are Black) and Sean McKeown (Conspiracy Theories). I’ll keep my powder dry for Marchesa until a little later this summer; today, let’s take a look at Brago, King Eternal! 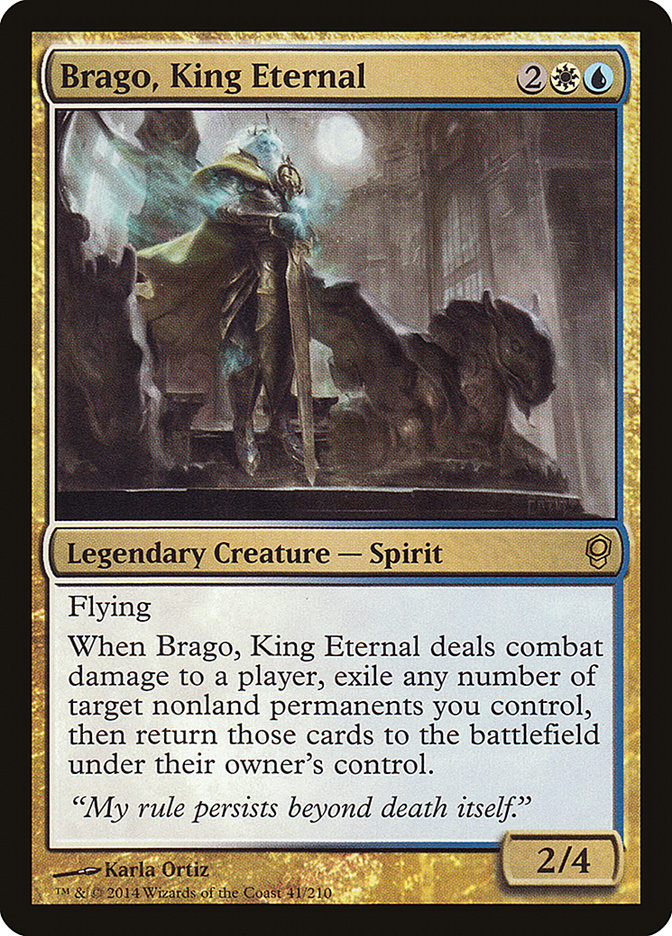 Brago, King Eternal’s value as a Commander isn’t exactly subtle — if you’ve got a lot of non-land permanents you’d like to blink, he’s your man. I’ve already explored some of this with Roon of the Hidden Realm, and a lot of blue or white value creatures that work in Roon will with Brago too. However, Brago takes things a heckuva lot further than our Rhino friend Roon — Brago can blink any nonland permanent, not just creatures, and when he triggers he can blink any number of them. Any number of them! If you’re like me, you’ve envisioned a whole battlefield of value creatures blinking out and back in for another round of value and, if you’re like me, you find this thought very appealing indeed.

But wait — there’s a catch. Brago only triggers from combat damage, so… before we get ahead of ourselves, we need to figure out how Brago gets in there.

While Brago is thankfully blessed with some evasion, he’s not very large and can get stymied by a flying blocker or one with reach pretty easily, so we need some more ways in. There are some Commander staples that help a creature get in there — Rogue’s Passage and Whispersilk Cloak. Thassa, God of the Sea is sending in her minions unblockable in Standard, she can do the same work in Commander. While pinpoint removal like Swords to Plowshares is useful in Commander, we often lean more towards mass removal or reusable effects. However, sometimes all you’ll need is to clear out one blocker to let Brago get in there, and then you’ve got all the value triggers to more than make up for the card expenditure. I think I’m going to like Parallax Wave here — drop it, remove one or two remaining blockers, attack with Brago, then reset the Wave and do it again next turn. Deepchannel Mentor is a little pricey for a 2/2 even though it makes your blue creatures unblockable, but being small just means it works with Reveillark.

Most of the cards here are easy picks for their abilities that trigger when entering (or leaving) the battlefield — Wall of Omens, Trinket Mage, Solemn Simulacrum, Reveillark, Mulldrifter. They are first-string players in Value Town. Lavinia of the Meek does decent work as a one-shotter, but she really gets out of hand if you trigger Braga each turn. I also included some other cards that trigger off permanents coming into play like Auriok Champion and Angelic Chorus, and Mentor of the Meek can potentially net a fair number of cards with enough mana lying around.

I also decided to include a handful of other, “rule-setting” cards like Declaration of Naught, Meddling Mage, and Voidstone Gargoyle — you can play them early and just lock out an someone else’s early Commander, but later on Brago can reset them to neutralize a card that might be more detrimental to your plans (like, heaven forbid, Time Stop).

Blinking Exclusion Ritual every turn seems particularly awesome to me (and extremely obnoxious to my opponents). Treachery seems like a fun card to throw into the mix, blinking it out to steal another creature while also untapping five lands. If I’m not mistaken, a Treachery that comes into play this way can take control of a creature that has shroud or hexproof. [Editor’s Note: Yep, that’s how that one works.]

Taking advantage of triggered abilities is old hat in Commander, but the fresh new territory Brago explores comes from resetting nonland permanents other than creatures. Mana Vault is a potent card in Commander but can often end up dinging you for quite a bit of life over the course of the game, but with a Brago trigger you can blink it and untap it. You can do the same thing with the usual mana rocks as well. What’s really exciting is blinking Planeswalkers — activate the -2 ability on Jace, Architect of Thought, attack with Brago, blink Jace and then activate the -2 ability again. Activate the -3 ability on Elspeth, Sun’s Champion to kill all the big creatures (lucky for us Brago has less than four power), swing in with Brago, blink Elspeth and then activate her +1 ability.

I was looking for higher cost artifacts to fetch up with blinking Treasure Mage and ran across Spine of Ish Sah — perfect! As if playing it once wasn’t potent enough, but now you get to do each time Brago triggers.

I thought Glasses of Urza was worth the slot since I was playing those “name a card” cards I mentioned above. Take a peek, blink them with Brago, take another peek. This is a card I’ve been tempted to play quite a few times before, but usually it doesn’t make the cut. In this particular Brago deck, I think it definitely has a strong place.

Here’s what I’ve got cooked up for my first Brago, King Eternal deck:

I kept the basic land count rather high in order to ensure that Quarry Colossus and Emeria, the Sky Ruin can make an impact.

I have to say, this looks like a really obnoxious deck to play against, but it also looks like an absolute blast to play. I think I’ll save this to play against the more aggressively Spikey decks; the lockout cards could be quite helpful against the more combo-riffic decks out there. Besides a Jace, the Mind Sculptor (which I don’t own or he’d probably be in there), what other cards would you play in a Brago deck?