Hello, and welcome to this edition of Sullivan’s Satchel. A few weeks ago, I received a question that lent itself to a more thorough unpacking, or an “article” as it’s more commonly known. Once again, I have received such a question. Rather than the usual smattering of short replies, I’d like to do a deep dive, as I get variations on it with some regularity.

As always, you can send in your question to [email protected] or DM me on Twitter @BasicMountain. Under normal circumstances I answer a number of them, and one question is selected as the question of the week, with $25 in SCG credit going to its author. With that,

I was wondering if you’d be able to do a Recurring Insight for planeswalkers in general. I am really not a fan of planeswalkers. Even the less powerful non-offensive ones create a bad subgame when resolved IMO.

I get this question a lot, and I see variations of this question posted as fact on social media all the time, and so doing a more thorough investigation. It’s not surprising why — planeswalkers have a lot of heat on them. they are iconic characters, and the cards are significantly more powerful, both on average and at their peak, than any other card type. That they were introduced relatively late in the game’s history, as far as major card types go, only adds to the controversy they engender.

For the purposes of this article I’d like to limit my analysis strictly to gameplay — the cards in your deck, in your hand, and on the battlefield. I think planeswalkers do a great job in terms of giving iconic characters splashier treatment, of telling story beats in a way creatures can’t always convey, and of helping with sales goals, but that isn’t what the question is about and I think indulging that conversation is derailing and annoying, since what I see as positives can reasonably interpreted as negatives by the segment of players that hate these things.

1. Helps incentivize an interactive game on the battlefield

This isn’t true in all instances or with each planeswalker design, but in theory and commonly in practice the best way to engage with planeswalkers is to attack with creatures, and the best way to defend them is to try to block, or at least remove opposing creatures. Creature combat is intrinsically interactive, and the more creatures each player has, the more specific characteristics are likely to matter.

Many baseline keywords (flying, trample, first strike, etc.) only matter in the context of combat against someone who also has creatures, and the more characteristics of creatures that are relevant in a game, the more likely the games are going to feel different each time, that specific cards are going to answer specific problems, and so on. A lot of designers talk about “creatures are healthy for the game” and that’s true for a number of reasons, but getting both players to play with them is really the important thing, and the card type as a whole does a lot of work there.

2. Card with indeterminate permanence, informed by actions both players take

This is somewhat tied to the above and somewhat its own thing. Instants and sorceries just go to the graveyard, and otherwise noncreature permanents typically stay on the battlefield until someone casts a card that specifically destroys something of that card type. That’s all well and good, but not necessarily the most dynamic thing.

Planeswalkers engender a lot of novelty from game to game because their permanence relies on things other than, “Do they have Hero’s Downfall or not?” Because the vast majority have a power that can go up or down, they don’t exist in a binary of “instantly dies or stays forever.” Sometimes they stay on the battlefield for a few turns, informed by actions both players take, with their removal or defense one priority among many: life totals, positive exchanges in combat, whittling down the loyalty so the minus can’t be used or results in the planeswalker dying, etc.

3. Reliably resolves a game that has gone on for too long

Some players are reticent to concede no matter how dire a game is; the opponent needs to apply lethal or deck them. That isn’t necessarily fun for either party. Also, sometimes two decks align such that it’s very difficult for either to punch through the defensive measures presented by the other. Almost any resolved planeswalker, given enough time, either literally ends the game or accrues for its controller such an advantage that winning is trivial. Anyone who can’t contest a planeswalker for multiple turns is either incapacitated in some other respect or is playing an inappropriately defensive game (by which I mean a game so defensive that it’s worth disincentivizing on an engine level). Planeswalkers help put away games that have gone on for far too long.

4. Backstop against the right people

This is less the case now, with Negate and Hero’s Downfall perceived to be an important part of the balance ecosystem by Play Design. Even in 2021, they still do good work against many opponents with nothing but destructive interaction and very little in the way of creatures. There is room for that sort of play pattern, but it shouldn’t be trivial to pull it off, and giving people an array of card types, with varying degrees of resistance to removal, puts the burden on the control player to play specific cards for specific problems, rather than just playing the best control stuff on rate, and/or burdens them with actually getting the game over with in a reasonable time frame. Either one of those incentives moves things in the right direction, and it often manifests as both in Standard level play.

Even as a broad defender of the card type, I admit they have some issues:

1. Risk of repetition and/or hopelessness 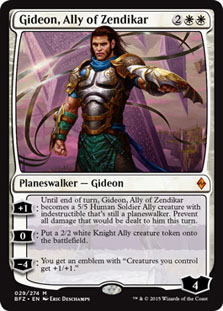 These cards give you several buttons to hit each turn. Sometimes hitting the same one over and over again (Jace, the Mind Sculptor; Gideon, Ally of Zendikar; and numerous other examples) is really powerful, and that’ll be boring a lot of the time. Combined with the power level and occasional unassailability (part of the reason that planeswalkers that defend themselves on zero or “plus” activates is so dangerous), and they can engender a game that promises to be both repetitive and hopeless, and sometimes that experience starts relatively early in the game.

2. Setup is stimulating for controller, not necessarily a two-player experience

Drawing a planeswalker is exciting, and when they’re in your opening hand or drawn early, they can inform a lot of novel decisions. Trying to manipulate combat in particular ways, putting a premium on removing evasive creatures, trying to draw out removal with another threat — all this is really fun for the person trying to set it up, and can make decisions play out differently from game to game, or even turn to turn.

Unfortunately, because the incentive is usually something like “cast it on a relatively stable battlefield and then run away with repeating advantages,” the aftermath of the setup “done well” isn’t that fun for the opposing player, who has the card cast against them a disproportionate amount of the time it’s powerful (when it isn’t good, they often sit in hand, the opposing player unaware that they’ve done work in preventing the planeswalker from showing up in the first place.) In short, the “stimulating/fun” aspects of the card are borne almost entirely by the controller, with the opposing player having to be persuaded that they just played a good game after it’s done.

Some caveats on the above: this is less of an issue in competitive play, where one often knows the planeswalker(s) the opponent is likely to have (so they’re “in on the joke,” as it were, before the card gets cast). All of this would be less pronounced if the cards were generally less powerful. But in Sealed/Draft/build a deck out of ten packs you bought/etc. their arrival in a game is likely to make one person not have a good time, even if the player casting it felt like they had to do a lot of work or make a bunch of interesting decisions to set it up.

My shorter answer to the question is — I think the pros far outweigh the cons, but it is important to be mindful of the cons when creating the cards. Planeswalkers where you get about their mana cost’s worth of stuff up front and also run away with the game sometimes, like Teferi, Time Raveler, exacerbate many of the issues. Even more modest planeswalkers that are hostile to what should be the baseline incentives, like Gideon Jura, go wrong way more often than they go right. But for all the baggage, I believe planewalkers make Magic a more interactive, dynamic, and compelling game, and those positives would manifest less reliably if the cards were broadly less powerful.