Hello again, everyone! While the column’s name hasn’t changed, you may notice that Jared Sylva‘s princely portrait has changed to my
somewhat more pensive profile. Running our entire Open Series has been a major time crunch for Jared, and he could no longer make the time to keep
updating itâ€”especially with twice as many tournaments for him to run. Of course, Too Much Information is one of our most popular and most
significant features, and it’s only going to become a better resource with 2011’s enhanced Open Series circuit, so I volunteered to take over
the reins. Jared will still be crunching the numbers behind the scenes, but I and editing superstar Lauren Lee will be delivering the analysis. Â

I’m going to kick it off with Standard. I’ve compiled all of the matchup data from our Kansas City and San Jose Opens, which yields a pretty
thorough metagame breakdown. The chart is organized by popularity, with any deck or sub-archetype that occupies less than 1% of the field removed. Each
win percentage was determined after removing mirror matches, in order to massage the data for better definition.

Bear with me, guysâ€”I’m a liberal arts major. (Link to Spreadsheet!) 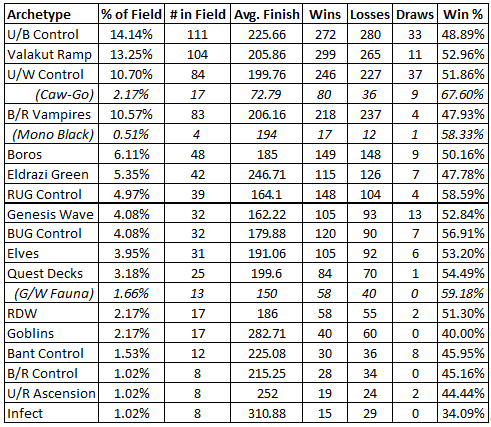 In spite of the aggressive renaissance that Kansas City experienced, the combination of San Jose’s adaptation and the general strength of control
strategies actually has aggro under-performing against the field over two weekends, in spite of the Kansas City Top 8. Even so, the format has a lot of
varietyâ€”Standard is clearly wide open. With the best deck changing from week to week, wily deckbuilders everywhere have a ton of opportunities to
exploit.

Normally I’d just be doing matchup charts for decks that are 5% of the field or more, but RUG is on the fringe at 4.97% and will surely be a
contender come Indianapolis, so I’m including it as well.

The darker flavor of Jace, the Mind Sculptor took the World Championships by storm, but the following weeks within the Open Series have not been kind.
With the largest turnout, U/B Control failed to break 50% and came out looking like yet another Standard candidate who has outlasted its fifteen
minutes of fame. Obviously, the deck is powerful and versatileâ€”it can be adapted in a variety of ways, and Orrin Beasley even managed to flourish
with it in Kansas City. Few others were able to match his performance, while the deck was shut out of the Top 16 in San Jose.

The culprits of this dismal performance? Many may be eager to chalk it up to pilot error, and it’s entirely possible that they’re right.
The only truly terrible matchups near the top appear to be RUG Control and Boros, but both archetypes had modest numbers. A 46.39% shot against U/W
Control and a 46.11% showing against Valakut are clearly close matchups that you could easily defeat in a given game, and altering your list could turn
these quite favorable. Even so, it appears that U/B success is reserved for the tightest of playersâ€”your margins are small, and you can’t
afford to give anything away for free.

Ah, the unsung hero of the past two Opens. Valakut Ramp has been quietly posting solid, if unspectacular, performances following the domination of our
Invitational in Richmond, and the deck will not be going away anytime soon. Many chalked the Worlds-era dominance of U/B up to its Valakut matchup, but
the numbers don’t lieâ€”you’re hardly in hopeless shape if you want to kill people by casting Primeval Titan. Considering the strength
of RUG Control in San Jose, I’d say that Indianapolis looks like a prime time for the archetype. The matchup has been historically tough for RUG,
and Valakut’s margins against the rest of the field are strong.

Frankly, doing the most broken thing possible looks like a pretty good default strategy. The only thing worrying me is that U/W Control has become a
significant thorn in Primeval Titan’s paw; a 43.04% performance isn’t impressing anyone, and a new plan may be necessary. If Genesis Wave a
la Conley Woods picks up, you should immediately cool your heelsâ€”the Valakut deck is a significant underdog against the full amount of Spreading
Seas and Acidic Slimes, with a meager 41.67% over a modest sample.

While I lumped Caw-Go within U/W for the purposes of the above metagame charts, I also did the math myself with Caw-Go removed from the
matchupsâ€”and those numbers tell a different story. When you remove Caw-Go and the mirror from the equation, U/W Control is at a mere 47.46%
against the fieldâ€”proving that Squadron Hawk is where a U/W mage should be right now. It’s possible that the decks should be considered
wholly different entities.

In all seriousness, Kibler put his money where his mouth was in San Jose, nearly besting the field with the same deck he featured in video form mere
days beforehand. He wasn’t alone, eitherâ€”Steven Edelson made the Top 8 with a Caw-Go list, and Ryan Allsup slid into a heartbreaking 9th place with a version
packing Stoneforge Mystics and a few select pieces of equipment.

Only seventeen players played the deck, making the sample size suspectâ€”after all, Pro Tour Champions didn’t compose 5.88% of any other
deck’s data. Regardless, I think it’s safe to say that Caw-Go is one of the best decks in the format right now, even with so few actual
results. If you choose to play the deck, note that Eldrazi Green, Elves, and RUG Control were toughâ€”but they played only a handful of matches.
With a performance breaking +70% against the two more popular decks, I’d say that Caw-Go is the deck to watch for Indianapolis.

The only real story to tell regarding B/R Vampires is that it’s no longer a premier Standard frontrunner. In fact, it was outperformed by nearly
every other archetype that composed more than 10% of the field, breaking just ahead of regular flavors of U/W Control and falling behind the
less-popular players. Cutting the red for black allowed Christian Valenti a chance to flourish, boosting his control
matchups and increasing his resiliency to mana disruption. Going forward, red looks like more harm than helpâ€”you won’t find many Jaces
quivering in fear of Arc Trail or Lightning Bolt.

Boros took down Kansas City in convincing fashion, but its overall win percentage dipped from 52.66% to 47.08% following San Jose, which wound up
averaging out to a break-even choice over two weekends. Boros is very fast with a surprising amount of resiliency over a long gameâ€”it’s
difficult to brick on land and spell at the same time, and most opponents have to drop low before stabilizing the board. If you want to attack on turn
2, then I don’t mind advocating Boros . . . but I’d much rather be playing Jace, the Mind Sculptor or Primeval Titan.

The moral of this story is, “Don’t play Eldrazi Green.” Boros appears to be on its way out and was never overwhelmingly popular
anyway, leaving you with nothing but uphill battles save one favorable matchup against U/W. I’m most surprised to see U/B only flipping a coin
here, as Memoricide seems good enough. Really though, there are better Primeval Titan decks than this oneâ€”Valakut is way more powerful than
Eldrazi Temple, and Jace is much stronger than every other card in this deck. There are just better things to be doing with this engine, and other
decks are already doing them. The deck was shut out of the Top 16 in both Opensâ€”players beware!

RUG was the big story of San Jose, especially following the inclusion of Garruk Wildspeaker by the players at the top of the heap. While even the
deck’s fans continue to claim that it has no favorable matchups, it turns out that they were wrong. Even these small numbers were able to clamber
to the top in San Jose, and I’d expect more RUG come Indianapolis. While Elves looks rough, with a mere 37.50% showing, most of the other
matchups were above water by more than a couple percentage points.

Even Valakut Ramp was only slightly worse than a coin flip over a pretty sizable sample, which could mean one of two thingsâ€”it’s not as bad
a matchup as advertised . . . or some RUG players can run really, really good. Garruk is probably a huge help in tweaking the matchup, as he’s
sort of like a redraw for Lotus Cobra. He’s not as potent, but he’ll still let you stick a Frost Titan fast enough to race their clock, and
his ultimate is a legitimate threat going long.

Among the less-popular archetypes, a couple others also stood out as worth looking into. Behold the best of the rest!

Speaking of Jace and Primeval Titan . . . Conley Woods and Chris VanMeter made a sizable splash in Kansas City with the U/G Genesis Wave variant that
Conley designed, and the deck has done reasonably well since, although it has yet to truly catch fire. I expect players were wary of Boros after
watching Pat McGregor so thoroughly dismantle his opponent in the finals, but the deck is a natural pick in a control-heavy field. I was pretty
surprised to see that RUG Control beat it rather soundlyâ€”23.53%â€”but the sample size is pretty small. What’s the real difference-maker
in the matchup?

Real-life contender or online budget phenomenon? Gimmick deck or legitimate threat? The world can’t seem to decide, and no lists appeared in the
Top 16 in spite of a reasonable win percentage. One thing seems certainâ€”Fauna Shaman belongs in this archetype. When you remove the G/W variants
from the overall pool, the deck dips to a 46.67% performance. Don’t leave home without your Razorverge Thickets!

The rest of the metagame had a pretty unimpressive couple of weekends. Elves did well on the back of a Top 4 performance from Matt Nass in San Jose, but the deck has yet to be acknowledged
as much more than a metagame predator. I think its pundits may wind up eating their words, but not until Caw-Go has passedâ€”Day of Judgment is still pretty tough for the green menace. Mirrodin Besieged will be delivering Green Sun’s Zenith, but white
and black will both gain access to a new sweeper.

Mirrodin Besieged
promises to provide a minor shakeup in Indianapolis, and I’m looking forward to watching the metagame chips fall. I’ll be there with Adrian
Sullivan and Jacob Van Lunen, bringing you the event in real-time on SCGLive.com. Tune in, and I’ll see you
next time!