My comment over the weekend was intended primarily as a joke, but there is some truth to it as well. Playing the same art for your lands matters. In fact, I’ll go out of my way to ensure that I have the exact same version of every copy of every card I play in my decks for major tournaments. Before Pro Tour Theros, I bought two copies of Chandra, Pyromaster that turned out to be Chinese and Russian. While the foreign-language versions are certainly much cooler looking and probably more valuable, I immediately traded them to Martin Juza for a pair of English-language Chandras because I didn’t want to play with different versions of the same card in my deck. I even make a point of finding the same art for all of my lands whenever I’m playing in a Sealed Deck or Draft event at a Grand Prix or Pro Tour.

Why bother? How can something like that matter? Well, my habit goes back to the early days of Magic when Cursed Scroll was a popular tournament card. For those of you who weren’t yet born when Tempest was a legal set, Cursed Scroll allowed a player to pay three mana and name a card and then reveal a random card from their hand. If the revealed card matched the chosen name, bingo! Two damage to the target of your choice. 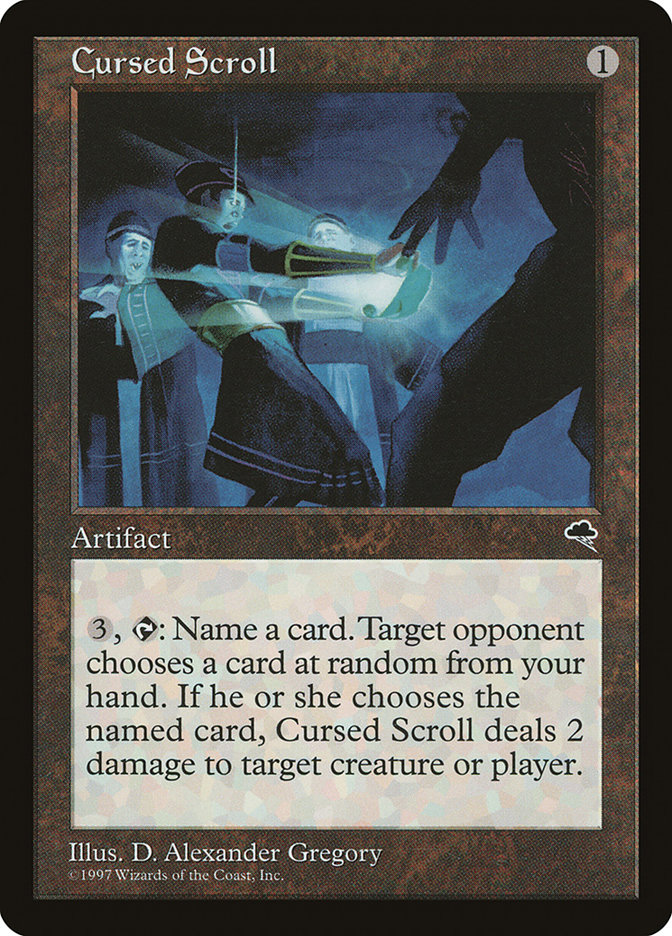 See where this is going? Say you name "Mountain"—which was probably the most commonly named card in the lifespan of Cursed Scroll. You reveal a Mountain and then do the same thing again next turn—except this time you reveal a Mountain with different art. If your opponent is paying attention, they now have information about your hand—information that you would not have given them if you had simply played lands with the same art!

"But Kibler!" you may say, "Cursed Scroll isn’t in Standard! It can’t be a big deal now!"

Oh, of course not. It’s not like there’s anything in Standard that might possibly reveal cards in your hand to your opponent . . .

As for Jeremy Dezani, not only was he playing different art for his lands, but he was playing Jace in his own deck, which reveals cards to your opponent before they go into your hand. In a match on camera, he took an Island from Jace and then later played a different Island than the one his opponent had seen! If his opponent was paying attention, he gave away a piece of information about his hand by doing so—information that would have been impossible for his opponent to derive if he had simply been playing with the same image for all of his lands.

Also, playing a bunch of mismatched lands looks sloppy. I mean, come on—how can you expect anyone to take you seriously if your board is a total mess? I’m not saying you have to go the full-blown Josh Ravitz with Guru lands or even Betas, but matching lands just look nicer on top of having a real tangible strategic benefit. Just do it.

Lost In The Shuffle

I cannot tell you the number of times I’ve sat down for a match and my opponent has been sitting there shuffling their deck facing me, revealing any number of important details before the first land has even been played. Every time I tell them that they’re shuffling with their deck facing me and suggest they should be more careful in the future—but the damage is already done.

How good is an opening hand with three removal spells and a Desecration Demon? Well, that depends. It’s pretty good against opposing creature decks but absolutely horrible if your opponent is playing control. Well, most of the field is creature decks, so it’s probably a good keep . . . Oh wait, your opponent flashed you a Sphinx’s Revelation while they were shuffling? Yeah, toss that one back. Two Thoughtseizes, Underworld Connections, and three lands? Perfect!

Magic is a game of imperfect information, and gathering that information can begin before the game even starts. Be sure to keep your cards hidden from your opponent until the game actually begins.

Errant shuffling is not the only means by which information can be gleaned before the match begins. Are you someone who keeps a notebook with you or a single piece of paper that you use for your life totals until it’s full and then flip it to the other side? Don’t do that—it makes you leak information like a sieve.

Every single time when I sit down to a match, the first thing I look for is my opponent’s score pad. What does it say on it? What does the progression of life totals look like? Hmm—it looks like my opponent’s life went down repeatedly in one point increments and then went up in big bursts, while his last opponent’s life dropped in similar big chunks. Well, that looks a lot like Underworld Connections and Gray Merchant in action.

It’s not just the life totals themselves that matter—even if you try to scratch them out so they aren’t legible to your opponent (or just have entirely illegible handwriting to begin with like me), they can still learn something from your life pad. Do you have notes of cards revealed? That means either you’re probably playing a deck with Thoughtseize or your opponent’s deck contained Jace, and from the names of the cards you took notes on, it’s usually pretty easy to figure out the latter.

Much like the previous practices, this is another one where it’s incredibly easy to avoid leaking information. Use a new piece of paper for every round so your opponent can’t see any of your life totals or notes from your previous rounds. And be careful about using a notebook and just flipping to a new page when you sit down to your match—I see that all the time from players who are apparently trying to be somewhat careful but don’t realize that the few seconds they give me to see their exposed score pad gives me a wealth of information about what to expect.

When you’re on the draw and the round is about to start, what do you do? The answer in most cases is "pick up my hand and look at it." Most players are impatient to get things started, and they want to see what they have to work with and start thinking about the game. Don’t do that.

When I sit down to a match, I always look at my opponent as soon as they pick up their hand. Magic players for the most part aren’t poker players—they aren’t good at concealing their reactions to what is happening. They’ll often move cards around in their hand to sort their lands and spells and give off a general sense of how pleased or unhappy they are with their hand, which can inform my decisions about mulliganing or generally how to play the early stages of the game.

If you aren’t someone who can pick up on physical tells and body language, you still shouldn’t pick up your hand and look at it until it’s your turn to do so because you never know if your opponent might be able to get information from you. There’s simply nothing to be gained by looking at your hand early, and every opportunity to provide information to your opponents should be avoided.

It’s a bit of friendly banter that’s common at everything but the undefeated tables of just about any tournament. No harm in chatting a bit with your opponent before the round starts, right? Probably not, but you could let information slip if you aren’t careful. A lot of people seem to get caught up in storytelling at inopportune times. It probably isn’t going to hurt your chances in your match if you tell your opponent that you took your loss against Mono-Blue Devotion, but you certainly don’t want to tell them that you were this close to killing them when they topdecked Rapid Hybridization for the win because that can potentially give them information that you’re playing a deck that could lose to a Rapid Hybridization in a clutch spot, which means it’s unlikely you’re playing something like Esper or U/W Control.

I’m certainly not suggesting that you should simply stonewall opponents who try to engage you in table chat, but it’s best to be cautious. If someone tries to strike up that sort of conversation with me, I typically deflect their questions amicably. I generally don’t indulge in such exchanges until after the first game when my opponent obviously knows what’s going on, and even then I’m sure to avoid mentioning specific details that could give away elements of my sideboard strategy or anything like that.

Magic is a game of information. Imagine knowing every card in your opponent’s hand at all times. How much more do you think you would win? The difference would be astronomical. And while the knowledge you’re giving up in each of the examples above is far from complete information, it all matters.

Your opponent knowing that you have a land in hand because you played a different picture from what you revealed before could be all they need to call your bluff and make a risky alpha strike. The card you revealed while shuffling could let your opponent know they should mulligan their opening hand. Your score pad, your reaction to picking up your hand, your bad beat story from the round before—all of it is information your opponents can use against you if you give it away.