Abrupt Decay is the Return to Ravnica card most likely to impact Legacy. In Magic’s long history, there has never been a cheap black removal spell that can stand up to Abrupt Decay in a format where four-drop creatures don’t see tournament play. It answers Delver of Secrets, Tarmogoyf, Dark Confidant, and Knight of the Reliquary with no questions asked. It doubles as a versatile answer to Counterbalance, Land Tax, equipment, Sulfuric Vortex, and Sylvan Library. The uncounterable clause means you can lean on Abrupt Decay, sculpt your game around it, and no longer fear being tempoed out by RUG or Stoneforge. 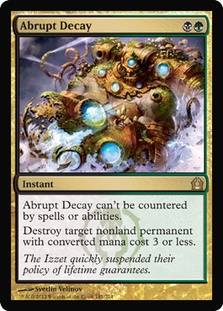 While I’m also a fan of Innocent Blood, it’s great to split your removal between Edicts and targeted effects. My one tournament loss with Pox came against a Bant player who played a quick Knight of the Reliquary and constantly restocked his shield of Noble Hierarchs and Dryad Arbors to protect it from sacrifice effects.

Pox players have waited a long time for such a card to be printed. The weakness of the deck is its inability to handle noncreature, nonland permanents. Games go long, so a card like Sylvan Library generating a perpetual advantage is backbreaking. What’s more is that being such a grindy, attrition-based deck makes it difficult to include utility cards that can’t reliably deprive the opponent of their main resources. As I mentioned, I had given up on Pox because I refused to play the deck against Counterbalance and Land Tax. Abrupt Decay seems tailor-made to handle these cards.

Abrupt Decay simultaneously solves Pox’s biggest problems and stands as a clear and satisfying upgrade to the deck’s removal suite. Who could ask for more?

B/G Pox already existed as a viable alternative to my personal choice of Mono-Black. Notably, it was played to a strong finish by Ali Aintrazi back in January. Life from the Loam offers a late game card advantage engine, and fringe cards like Pernicious Deed and Maelstrom Pulse are nice to have access to as well. Needless to say, I won’t lose any sleep over adding green to the deck now that Abrupt Decay exists.

Life from the Loam serves as a way to put the game away after a strong start. The goal of Pox is to bring the game to a topdeck war, where it will have a modest advantage because of Liliana of the Veil, Cursed Scroll, Mishra’s Factory, and land destruction. For this version, to say "modest advantage" would be an understatement. As the game drags on, Life from the Loam will continuously generate an advantage with fetchlands, offer a devastating engine with Barren Moor, and potentially lock the opponent out of the game with Wasteland.

The bad news is that the addition of dredge cards makes playing multiple copies of Nether Spirit impossible, but the good news is that the card will be dramatically more powerful now that it can end up in the graveyard without costing you mana or a draw step!

The inclusion of Barren Moor in the maindeck and Bojuka Bog in the sideboard could give someone pause for a deck with only two copies of Life from the Loam, as lands entering the battlefield tapped is not generally a winning proposition in Legacy. However, Pox plays an overabundance of lands to prevent its own Smallpoxes and Wastelands from setting it back just as badly as the opponent. These inefficient lands can be cycled or discarded if they’re inconvenient or played on turn 1 when the deck has no other plays. Don’t fret if you play them early and later draw a Life from the Loam, since a Smallpox or a Wasteland can put them back in the graveyard and later into your hand where you want them!

Similarly, Worm Harvest is admittedly overcosted in Legacy; you’ll never be thrilled to see it in your opening hand. However, it can easily be discarded to Liliana or Smallpox in such a case, and the power it grants in the late game will be well worth the cost. Pox has precious few win conditions to begin with, and I’ve cut one copy of Nether Spirit and one copy of Cursed Scroll from my original decklist. Worm Harvest is a reliable end game win condition, since it only requires one slot and can be dredged directly into the graveyard. It can’t be beaten by any realistic string of topdecks, and it’s even a reasonable way to fight planeswalkers.

Finally, Life from the Loam facilitates Zuran Orb as a sideboard card, which will be insurmountable for your Burn opponents who would otherwise pose a challenge for you.

Pernicious Deed is a useful and underplayed card in Legacy. While being generally powerful and versatile, it specifically serves as an answer to Lingering Souls and creature swarm strategies, which can pose a problem for Pox’s one-for-one game plan. For a modest mana investment it will leave the board spotless clean. Spotless clean, that is, except for your Liliana of the Veil, your unactivated Mishra’s Factory, and your recurring Nether Spirit. Conveniently, it can be added to the board and saved for later use in those games where you need to empty your hand to take advantage of Liliana or Smallpox.

Though I haven’t included it in this decklist, Maelstrom Pulse is an equally viable option for answering tokens since it can also kill Jace, the Mind Sculptor. I’ve elected to take my chances with the card in game 1 and sideboard Pithing Needle afterwards, as Needle can also hit Sensei’s Divining Top against Control or equipment against Stoneforge.

This has always been a great matchup and a reason to play Pox. Abrupt Decay is insurance against funny business like Sulfuric Vortex and Sylvan Library and is one more way to keep Tarmogoyfs and Insectile Aberrations from getting out of hand. The RUG player will be left with Nimble Mongooses to fall back on, for which you have Smallpoxes, Lilianas, and Pernicious Deeds.

It’s pretty fun having more removal than your opponent has creatures.

The maindeck is already streamlined for matchups like this, but you can safely cut the inefficient Worm Harvest since Delver won’t be able to permanently answer your other win conditions. Zuran Orb is great with Life from the Loam and provides insurance against being burned out. Also, for such a favorable matchup, anything that buys you extra time is welcome.

Nether Void, while expensive, will shut them out of the game if you ever cast it on an even board.

This is another great matchup and feels somewhat similar to RUG. What do the two decks have in common? Green! Anyone trying to attack you with green creatures is going to have a rough go of it. Maverick also usually has five nearly dead removal spells in its maindeck. Thankfully, "nearly dead cards" means dead cards where Pox is concerned, since you can easily empty their hand with discard before ever giving them a target to point their Swords to Plowshares at.

Here, I would leave Worm Harvest in just in case they take out your Cursed Scrolls with Qasali Pridemages or have graveyard hate to remove some of your recurring threats. Maverick has far more mana sources than RUG, so Nether Void is less reliable.

Engineered Plague naming Human can be okay, but I’d rather leave it on the bench to make sure Pernicious Deed is at its best.

This matchup is a little more challenging because of Stoneblade’s inherent card advantage and Jace, the Mind Sculptor. Do what you can to keep Jace off the board by keeping them either low on lands or empty-handed. If you can do that, all the other answers are available to you.

Pox can operate on a wide range of lands (23-26), but I’ve included the full 26 in the maindeck in order to comfortably fit the second color and all of the value lands you might want. It’s hard to have too many since you can constantly sacrifice and discard extras. However, against decks that don’t play Wastelands of their own, you can feel comfortable sideboarding out a Swamp or two.

If you’re struggling against Lingering Souls in particular, add a Night of Souls’ Betrayal to your sideboard (it would come in against Maverick and tribal decks as well). It breaks the back of Esper Stoneblade since it wipes out Lingering Souls, Snapcaster Mage, and Vendilion Clique all at once.

This matchupis not easy, but now you have access to the tools you need to win. Your easiest path to victory will be an unanswered Liliana, so use your discard on their Spell Pierces, Counterspells, and Oblivion Rings. Use your Abrupt Decays on their Counterbalances, Land Taxes, and Vendilion Cliques. Use your Pithing Needles on their Sensei’s Divining Tops and their Jace, the Mind Sculptors. Nobody cares about their creature removal!

The three-color build will be significantly easier to beat since it’s more vulnerable to Wasteland and it devotes sideboard slots to the Elemental Blasts, which won’t help them at all in this matchup.

Smallpox, while among the best cards in the deck, is not at its best against a deck with no sorcery speed creatures. Between Pithing Needle and Abrupt Decay, you can shut down all of their major engines and leave them like a broken-down Buick, idling in the garage and waiting to be scrapped.

This is the hot deck of the week after its strong showing in the StarCityGames.com Invitational and Max Tietze victory in the Legacy Open. That’s no reason to stress, but it is reason to give the deck a little more respect than you might otherwise.

In the absence of sideboard hate, Goblins would be a challenging matchup since Pox is all about trading one for one and Goblins is all about having fifty creatures on the table. However, with the addition of two Pernicious Deeds and four Engineered Plagues along with the Cursed Scrolls to clean up at the end, the matchup will be squarely favorable.

Pox is in a prime position to catch Legacy off-guard. It makes use of the best and most unique newly printed card in Abrupt Decay and attacks the format in a way that’s completely different from any deck seeing mainstream play right now. Give it a try!

Dom Harvey and Ari Lax dig through the recent Magic Online event results and piece together what the new Modern might look like.

Will Historic Ever Not Be A Complete Mess?

Brad Nelson sees the Time Warp ban in Historic as a swing and a miss, but he only wishes he had been surprised. How did Historic get here, and how can it get better?

Have You Heard The Buzz About Hardened Scales In Modern?

Dom Harvey took down a Modern Challenge with Hardened Scales. Get his latest thoughts on the deck and an updated list.

Between Asmor and Urza's Saga, GerryT is reveling in a Modern full of broken possibilities. He offers a feast of Food decklists... and a surprise at the end.

Can Izzet Prowess keep up with the new decks enabled by Modern Horizons 2? Patrick Sullivan thinks so, as the Modern stalwart picked up an upgrade of its own.

On this episode of The 540, Justin Parnell and Ryan Overturf go in-depth on the white and blue cards of Modern Horizons 2.

The Crashcading Of Modern Has Only Just Begun

Was Crashing Footfalls the payoff Cascade decks needed all along? Todd Anderson tries to build the next great Modern deck with "Crashcade."

Ryan Saxe shares how to rethink converge in Modern Horizons 2 Draft, and puts it into practice with picks on his way to a trophy.
View More