What We Know #1: The StarCityGames.com Open Series featuring the Invitational is coming to Atlanta this weekend.

I will have the privilege of broadcasting this tournament with two Pro Tour champions, Osyp Lebedowicz and Tom Martell. You can expect to see the finest players on the Open Series circuit battle it out over three days. Todd Anderson almost defended his title at the last Invitational in Los Angeles, but “Good Guy” Reid Duke and his Bant Control deck ended up victorious.

Can he defend his crown? 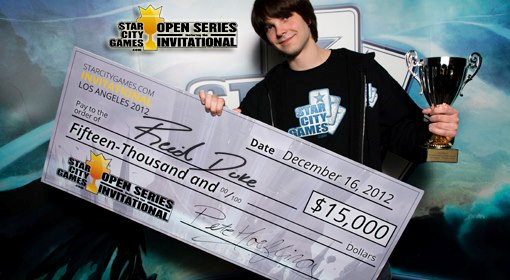 What We Know #2: G/B/W Reanimator will be the most played deck in the tournament.

When looking over these five decklists, you will notice a lot of similarities. But one thing to note here is that every decklist here has a minor difference and innovation. Bauer, for example, had great success with Lotleth Troll and Tragic Slip, whereas Craddock gave the full amount of Deathrite Shamans and a singleton Vraska the Unseen a try.

This is important because playing against G/B/W Reanimator multiple times in a tournament will never be the same experience. Some may have a lot of spot removal in their sideboard (Abrupt Decay, Tragic Slip, etc.). Some have begun to play removal in their maindeck (namely Orzhov Charm, but there are lists that are starting Abrupt Decay and/or Tragic Slip). And some have even taken those annoying Acidic Slimes and moved them to their maindeck to get an edge in the mirror.

I think we can all agree that G/B/W Reanimator is the deck to beat coming into this tournament, but in order to have success against it, you must know all of the different things that can happen both pre- and post-sideboard.

Just assuming you have to stop Unburial Rites on Angel of Serenity simply isn’t enough anymore.

What We Don’t Know #1: What lengths will people go to beat G/B/W Reanimator?

The Magic Online PTQ on Friday brought a very interesting deck to the table:

A lot of people have talked about Fog as an answer to both the aggressive decks in the format (Naya Blitz and Jund Aggro, among others) as well as a way to buy time against G/B/W Reanimator. We finally saw that theory put into practice by BReal2, and it almost netted him an invite Pro Tour Theros. But here is a very real question for you:

Does anyone have the guts to play this in real life?

That question may seem odd, but it is a very real one. It’s very easy for someone to rationalize to themself that playing a deck like Turbo Fog is ok in an online PTQ. There’s some amount of safety attached with sitting behind a computer, adding four Fog / Clinging Mists to your decklist, paying 30 tickets, and going to battle. Lord knows I’ve played some very questionable decks in online PTQs with the attitude of “who cares, there are a million of these things anyway!”

There aren’t a million SCG Invitationals.

The decision to sleeve up Fog / Clinging Mists certainly becomes a lot more difficult once you buy a flight, pay for a hotel, and are asking your friends, “Is Druid’s Deliverance better/worse than Clinging Mists?” on the morning of the tournament.

Furthermore, what if you’re wrong about how much G/B/W Reanimator people will play? The SCG Invitational is notoriously filled with players who love to play blue decks like Gerry Thompson, Todd Anderson, Matt Costa, and Ben Friedman. If they haven’t “given up” on the format and have decided to tune their U/W/R Flash / Esper Control decks, you will get laughed out of the building as you draw Fog after Fog.

But if you’re right? You could be Joel Calafell from Worlds in Rome circa 2009, who went 6-0 in Standard:

Something to Consider #1: Selesnya Charm is the cleanest answer to Angel of Serenity that isn’t being played.

Selesnya Charm is arguably the best Charm in the format right now, and it’s seeing little to no play. All three modes on Selesnya Charm are incredible, but the most relevant one, exile a creature with power five or greater, is a permanent solution to the most problematic creature in Standard.

So where does Selesnya Charm fit in? That question is a little more difficult to answer.

My first inclination is to make room for it in Naya Blitz. All of the modes are at home in that deck, and Searing Spear, a card that has never truly impressed me coming from Naya Blitz, has gotten worse and worse as G/B/W Reanimator has established a stranglehold on the format.

Then there’s a deck like W/G Humans from many moons ago:

Sam Black took this decklist to a ninth place finish at Grand Prix Charleston back in November. It’s easy to say that things are much different now and that this deck is horribly outdated. And in most circumstances, it would be difficult for me to argue with you.

W/G Humans was a deck that became popular due to its ability to absolute destroy Angel of Serenity decks. Not only does this deck use Selesnya Charm extremely well, but it has access to Champion of the Parish (the best aggressive one-drop in Standard); Thalia, Guardian of Thraben (a card that slows G/B/W Reanimator down a lot); and an extremely fast clock (Naya Blitz is likely the only faster deck in the format).

With Boros Reckoner at an all-time low, this could be something to consider…

What We Don’t Know #2: What are people going to play in Legacy?

For how much talk there has been about how to beat G/B/W Reanimator in the past month, a lot of people seem to have forgotten that half of the SCG Invitational is Legacy. Now, I understand that with the PTQ season and WMCQs being Standard, it probably should get all of the attention, but I feel that if a group of gamers has been testing the hell out of Legacy, they may be in for a very good weekend.

I certainly don’t think the strategy of breaking Legacy and crossing your fingers with Naya Blitz is a poor one for this Invitational.

Something to Consider #2: Perhaps crossing your fingers with Naya Blitz is the best strategy.

Speaking of crossing your fingers with Naya Blitz, last weekend in Orlando Aaron Leblanc absolutely destroyed everyone on his way to a Standard Open title with that strategy:

Arguments about how good this deck truly is can be had all day, but if you watched Aaron win on SCGLive last weekend, you know how powerful this deck can be.

With many jockeying for position in G/B/W Reanimator mirrors and others tuning Hallowed Fountain decks to beat those trying to cast Unburial Rites, maybe the best strategy is to beat the maniacs who have decided to maindeck Acidic Slime and show them just how completely broken Burning-Tree Emissary truly is.

Remember, you don’t get extra match win points for showing everyone how perfectly your control deck is built. No one really cares if you knew that 38% of the room was going to play G/B/W Reanimator if you went 3-5 on the weekend. A win is a win, and Naya Blitz is still pretty good at getting them.

What We Know #3: Jund is not a good choice this weekend.

I know a lot of people love casting Olivia Voldaren and miracling Bonfire of the Damned. But there’s a time and place for that, and that time is not right now. Simply put, Jund has never been this poorly positioned before and trying to “dodge” G/B/W Reanimator is a strategy that will see you on the sidelines Saturday morning.

Something to Consider #3: Evil Twin and Clone are unique ways to beat Angel of Serenity.

But if you try sometimes…

What We Know #4: This tournament is going to define our Standard format for weeks to come.

Simply put, this tournament will define how Standard progresses for the next few weeks. Join Osyp, Tom, and me as we peel the layers back on just how to stop G/B/W Reanimator.

I’m truly looking forward to it.