Maybe a great player is actually more likely to have the card they need. It could be they’ve already considered the plays you might make and how they should respond. That counts. Perhaps they built their deck to have the right proportions of creatures, counterspells, lands, Swords, whatever. That pushes the percentages in the right direction. They’re not sideboarding Surgical Extractions against your G/R Aggro deck. No dead wood. They didn’t keep a loose hand, so those four cards aren’t all Islands, sorry.

Those factors all count for a bit, and they all add up. But the huge distinction lies in something the pro doesn’t do.

They don’t play their cards at the first opportunity. They don’t Tragic Slip a Diregraf Ghoul if they’ll need it later to take out a Falkenrath Aristocrat. They’re going to squeeze that Mana Leak or Restoration Angel or Snapcaster Mage for every bit of value it’s worth.

This is one of, if not the biggest, differences between watching your ordinary guy with a decent grasp of the game and watching Yuuya Watanabe. It doesn’t take all that much to be able to throw some cards on the table. It takes a lot more to know exactly when to throw and when to refrain from throwing. 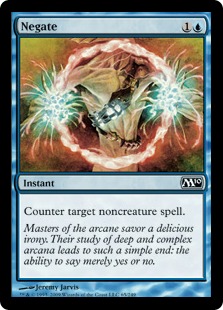 One of the most famous plays ever made was by Gabriel Nassif in the finals of Pro Tour Kyoto. Facing down a board full of creatures, Nassif chose not to Negate an Ajani Goldmane that threatened to put Luis Scott-Vargas in control of the game. It’s remarkable because it’s something a lot of players wouldn’t even consider. They see Negate in hand, they see a non-creature spell on the stack, and they figure cards are there to be used.

Say you’re playing Delver, and you start with the namesake card into the classic flip-it-off-Mana-Leak on turn 2. After playing your second land and attacking, your hand is Snapcaster Mage, Vapor Snag, Restoration Angel, Mana Leak, and land. Your G/R opponent replies with a Strangleroot Geist on turn 2â€”do you counter it?

The argument to do so goes something like this: with Snapcaster Mage and Vapor Snag, you’re in prime position to tempo him out early almost regardless of what he plays. You can afford to use a Mana Leak just to keep him a little off balance; you’ll have it available anyway through Snappy in a couple turns to stop Bonfire or a similar blowout.

Nevertheless, I’d hold the Leak. Why use it? Strangleroot Geist isn’t about to race you or even slow your clock significantly. That Leak could be key if his three-drop is something like Birthing Pod or Sword of War and Peace. Even though trading for a Strangleroot Geist is often a good use of a Mana Leak, it’s not especially so here. You’re not about to get raced. You can do better by conserving that Leak in hand.

And it’s not just cards in handâ€”it’s cards on the board as well. Just recently, I was watching a game where one player was very flooded and had only a couple of Soldier tokens to their opponent’s Restoration Angel. They were grinding it out with Vault of the Archangel, spending five mana a turn but staying level; both players were on a healthy seventeen or so.

Attack with Soldiers, use Vault. Play a tapped Seachrome Coast. Ugh, so many lands. Tap out for flashbacked Lingering Souls. Go.

End of turn Snapcaster Mage, Gut Shot a Spirit. Attack with Mage and my Angel. 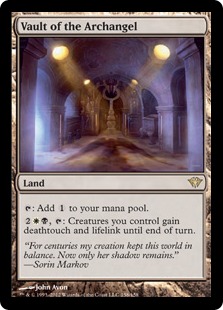 You have a Spirit and two tapped Soldier tokens with eight lands on the table. They have five cards in hand and five lands. Your hand is two lands and a Day of Judgment. Do you block?

I don’t, and it comes down to conservation of resources. You’re in a hole. You have to manage what you do have extremely carefully and make excellent trades whenever possible. Luckily your Vault has given you breathing room, so you have time to maneuver.

That Spirit token, although in most circumstances is worth less than a 2/1, is worth their 3/4 Angel here. You have a vast excess of lands. Holding up five mana in their turn is nothing. A Soldier can trade for the Snapcaster easily whenever it’s necessary. Life is not a critical resource in this gameâ€”you’re happy to take a couple extra damage to set up a better board position in a couple of turns.

When you should take your chances

Another thing the best players do is focus only on what matters. Every decision they make is with the end in mind: what play here gives me the best chance of winning? Not, Gosh, I hope he doesn’t have that Vapor Snag. Wow, that would suck. I should’ve thought about that, or, I’m so unlucky; this is my seventh Forest!

What play gives you the greatest chance of winning depends a lot on where the board is at. Are you in control, or do you need to rip? Should you be conservative and play to give him few outs? Or throw caution to the wind and chance the loss to Gut Shot?

Imagine a scale from 1 to 10 representing your (estimated) chances of winning the game. It might look something like this:

1 is facing down an Emrakul and seven cards in hand with a land and a Noble Hierarch, and 10 is swinging for lethal with double Mana Leak backup.

Depending on where you feel you are on that scale, you should take risks accordingly. At the lower extreme, you might be 99% to lose the game. Your estimation is “1.2, trending downwards.” You have to rip that Bonfire or it’s on to game 2. Oh, and those two cards in his hand need to both be land and same for the top card of his library. 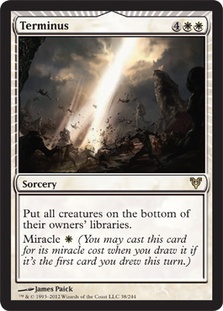 In that case, play as if that’s exactly what’s going to happen! You have nothing to lose, after all. That means taking a thousand risks and making a bunch of implausible assumptions about how the game will play out. In all likelihood, what’s going to happen is you’ll make your bad blocks and you’ll get Incinerated and killed on the spot. But who cares? You lost to Incinerate anyway.

The other extreme might be at 9.8â€”say a Limited game where you have four fliers to his single Butcher Ghoul. The only way you can possibly lose is if he rips Terminus. Probably he doesn’t even have Terminus in his deck. But there’s just no reason to play that extra Seraph of Dawn out from your hand. You kill him next turn anyway, and it opens up a possibility, however small, that you could have the game snatched away from you.

Ok! I want to stop here and emphasize what I’ve just said, because it illustrates a very important concept in Magic. Simply put: the further ahead you are, the more you can afford to avoid risks. These two examples are perfect learning tools to illustrate my point, so I’d like you all to copy them down into your notebook because we’ll be referring them to them later. (You are taking notes, right? What do you mean you’re on your lunch break at work??)

Everyone got that written down? Great! Now rip it out and flush it down the toilet. These scenarios are to real life Magic what underwear models are to real life people. They are way too perfect, and those abs are definitely airbrushed. Real life Magic consists of making arduous decisions around the 3 to 7 range, where estimations get fuzzy and calculations get imprecise. Do you want to attack into a potential Restoration Angel or miss out on the three free damage? That’s a real decision, that’s exactly when you need to figure out if you can afford to take the risk, and it’s also exactly when it’s very hard to do so.

Bonfire of the Damned is your only out? Are you sure? Because if it’s because you need to kill that Venser before it goes ultimate on you, Zealous Conscripts might be a much better one. And Terminus off the top isn’t often the only thing that might turn the game around. A Demonic Rising might make it so your attack isn’t lethal, and then a Bone Splinters turns that into two Demons and some dead Angels. Or an Entreat the Angels for four could change everything. 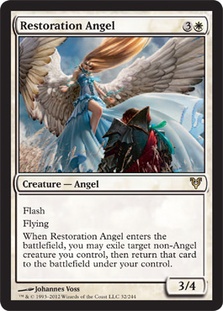 My point is that you usually can’t simplify to “there’s only one card off the top that could be relevant, so I only have to consider two scenarios: drawing that card or not.” Most important decisions are made with far less information.

Let’s take another example with Delver because everyone seems to be playing it these days. Your Esper Control opponent is on fourteen and has two Spirit tokens to your Geist of Saint Traft. You have six lands in play, one more in hand, Restoration Angel, and an ugh-why-is-this-maindeck-I-should’ve-just-played-Gerry’s-list Divine Offering. He has four cards, six untapped lands, and a Forbidden Alchemy as the only card of note in his graveyard. It’s your main phase. You’ve already played a land. What do you do?

Basically, you have two options. One is to send in Geist and flash in Angel when he double-blocks, clocking him for four and adding another creature to the table. That’s pretty miserable if he has Mana Leak or Day of Judgment, in which case he leaves you with absolutely nothing. But if it sticks, you have a legitimate clock and a chance to just kill him in two swings.

The other option is to just pass the turn. Next turn you’ll be able to do the same thing with enough to pay for Mana Leak; plus, you might rip a Vapor Snag or Gut Shot to let you play around Wrath as well. This is safer but less potentially powerful; you’re giving yourself time, but you’re giving him time as well.

The thing is that your chances look pretty grim. He’s still on a healthy life total and you’re rapidly running out of cards. Once Esper starts flashing back its Alchemies, the prognosis for Delver is not good. Next turn, despite it being safer, it’s far less likely that Angel will be good enough. He flashes back an Alchemy, possibly hitting a Wrath, possibly hitting Sun Titan and putting Phantasmal Image or Oblivion Ring in the graveyard, possibly just getting overwhelming value with Lingering Souls. There’s nothing for it but to take the plunge. If he has it, he has it, and you were probably losing anyway.

Until next time,
Jeremy