Hello everybody and welcome to another edition of the Magic Show. Yes, I’ll happily admit it’s good to be back. The Show as you know it isn’t a regular program, but it’s not going away. It’s simply on less often. With that said, we got a sick Premium Deck: Graveborn spoiler for you guys today, so let’s go! 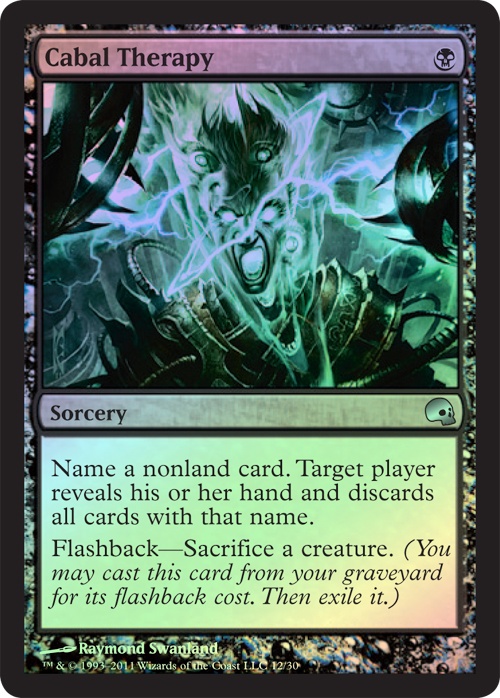 This newly foiled, new art reprint is showing up again in Premium Deck Series: Graveborn and man it’s a sicko. This multi-format all-star has been seen in aggro, control, and everything in between. The usage in the Reanimator deck in the box is obvious–you’ll often Cabal Therapy yourself, just to get your fatty in the yard. This will let you Reanimate Dead said fatty and proceed to bring the beats.


Right now all we know that is included in the deck is Avatar of Woe, Reanimate Dead, Buried Alive, Crosis, the Purger and the awesome chase rare Entomb. Cabal Therapy adds another awesome reprint to the mix, adding to the value of this set once-over.


Me? I’d like to think this awesome foil reprint with all-new art just makes the set that much more valuable. I, for one, am happy to rock the new artwork in my cube, including the first-time-in-foil Animate Dead that I’m also very excited to get a hold of. Wizards has originally done Slivers and Fire & Lightning in their Premium Deck Series, but from all reports this one is much, much more successful than even those ventures. This set is a home run for all sorts of reasons, and will be valuable for some time.


I’d like to thank Wizards of the Coast for the sweet spoiler, and look forward to getting my copy of Graveborn as soon as possible.


So with that said, let’s touch on other matters, shall we?


Man, have you read about Magic: The Gathering Organized Play lately? Yeah, I know, I haven’t heard anyone say ANYTHING about that lately. So, yeah, Wizards is seriously up-heaving what we’d describe as “pro-level play.” We’re losing Worlds as we’ve known it, and as we’ve always known it, with many countries being shut out from taking part. The Pro Player’s Club is dead for now, long live the Pro Player’s Club, and those who play next year have no idea what’s coming in 2013, if anything.


Basically we’re in a state of flux. It appears that Wizards both has a master plan and is making it up as they go along. But as we know or should know, that’s not the case. It’s either one or the other. And based on all that I’ve heard and read, it may lead to two things: One is the potential death of the Pro Tour as we know it. The other is the lessening of the importance of a Pro Tour and instead focus on the rise of the Grand Prix. This means less money being poured into upper echelon stars, and more money being put into plane tickets and high-level events open to all. I mean, when they decided to fly the Top 100 Planeswalker Points people and 300 plus PTQ winners from all across the globe every Pro Tour season, they gotta pay for it somehow, right?


Yes, I think Planeswalker Points have a ton of flaws. Double-dipping FNMs, no penalty for no-shows, GP side events worth more points than winning States, the problems go on and on. No auto-invites for Top 16’ers of GPs means those in far corners of the world could be shut out from Pro Tour play. With Nationals now “just for pride’s sake” I think you’ll see both less enthusiasm and less attendance to those events.


There is no doubt that things have changed. Very little for the casual player, much for the top level. What many would call the 1% of Magic players. What I would call the majority of Wizards of the Coast’s “Star Building and Promotion” program.


With the removal of a large number of incentives, ie the Pro Player’s Club, and the uncertainty of what comes in 2013 brings us the worst of both worlds: Negatives and confusion. Together, while WotC has wisely chosen to provide the promised Pro Player’s Club benefits in 2012, don’t actually explain how good of an idea it is to work hard and show up to as many events as possible in that year. Yet.


Planeswalker Points further muddy this issue as point totals are varying widely, playing in more events is simply your best bet, and many of the game’s best really don’t have the time to grind infinite events.


What do we do? Well, Wizards has replaced Worlds with a 16-man tournament with a whopping $100,000 in prize money thrown around. While you can argue with its invite policy, I believe the best thing Wizards can do with this Worlds 2.0 tournament is give the winner his or her own card along with those fat stacks of cash. Like they did for another 16-man invite-only tournament once up on a time.


Aaron Forsythe recently gave us some interesting pieces of information on Twitter, including the revelation that these cuts and changes were not mandated by Hasbro, rather themselves, and that the Pro Player’s Club will return, and will be finalized by Pro Tour Honolulu next year.


So more drama? Sounds good to me. This is just getting heated up–right now even with a promised Pro Player’s Club, people are still nervous, skittish, and upset that yet another Pro Tour is leaving us. Particularly the Pro Tour that made Nationals matter, and the Pro Tour that saw more diverse faces than any other.


And what about the Hall of Fame? Has anyone thought how weird and difficult it’s going to get the criteria right for those players? While Pro Points aren’t perfect, they were a pretty solid measuring stick to see how well you’ve done in the game. Paulo Vitor Damo Da Rosa is the youngest and I believe fastest player to ever reach 100 Pro Points. What does that mean now? What should it mean, and how does the focus on more Grand Prixs and less Pro Tours mean for new players?


With things in flux and Wizards often answering questions with more questions, this episode of “MTG LOST” just gets more and more interesting.


As the next few months shake out, I believe even more digitial ink will be spilt discussing the how’s and why’s, and in the meantime there is literally no better time in the history of the game to be a Magic player of any sorts. Casuals are getting their Commander goodies, Competitive players are getting the SCG Opens and lots of GPs, and everyone else is getting some of the best R&D work ever produced in Magic’s history.


So with that, we have another edition of the Magic Show. Until next time Magic players, this is Evan Erwin. Tapping the cards…so you don’t have to.