Magic Online* presents players with the option to join a myriad of events. With all these options available, how do you, the player, decide which events to play in to maximize your expected profits? In order to play in events that maximize your earnings (and increase your chance of going “infinite”), you should play in the events that have the highest expected value.

*(If you don’t play MODO, there’s a quotes section at the bottom.)

Each event on MODO has different entry requirements and different payout schemes; the following table is a summary of the entry fee and prize payouts for each event:

*Buying packs from bots always costs less than four tickets a pack; it is therefore beneficial to enter any Innistrad Limited event using the pack option. You should almost never buy packs from the MODO store, as it is cheaper to buy tickets and then acquire the packs from a reputable bot.

The type of boosters received depends on the format played; information for different events can be found here.

The following graphs show the EV of each Innistrad Limited event as a function of the player’s overall match win probability (MWP) with a table below showing each event’s breakeven MWP, which is the MWP required for you to expect to earn your entry back.*

*Profit based on the following buy prices for packs: 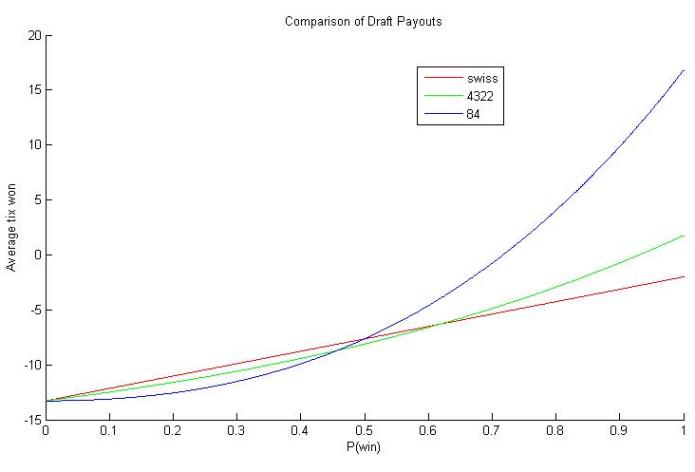 However, this chart does not take into account the worth of the cards a player opens in their product. Factoring in the average weighted worth of a rare/mythic (1.01 per pack*) gives the following, corrected results.

*Based off Supernovabots buying prices, not fully accurate due to double-faced cards and foils. 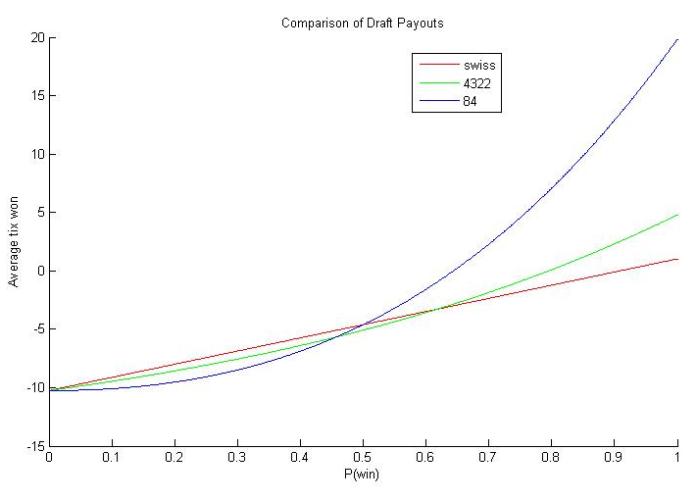 It is recommended that in order to maximize your EV on MODO that you avoid Innistrad block draft (other formats, such as the now phased out Urza’s block drafts, were profitable due to very high Eternal card prices). However, if you enjoy drafting and want to include it in your MODO events, at least pick the most profitable event for what you think your expected MWP is: if you expect to win over 50.10% of your draft matches, you should 8-4; otherwise stick to Swiss. There is no point where 4322s offer the best EV (which you can confirm on the above graph).

Ted Knutson recently wrote about how bad of a value 4322s were and suggested WotC change the prize structure to 5322s. If this change actually occurred, the EV graphs and breakeven MWPs would look like this (with card opens included): 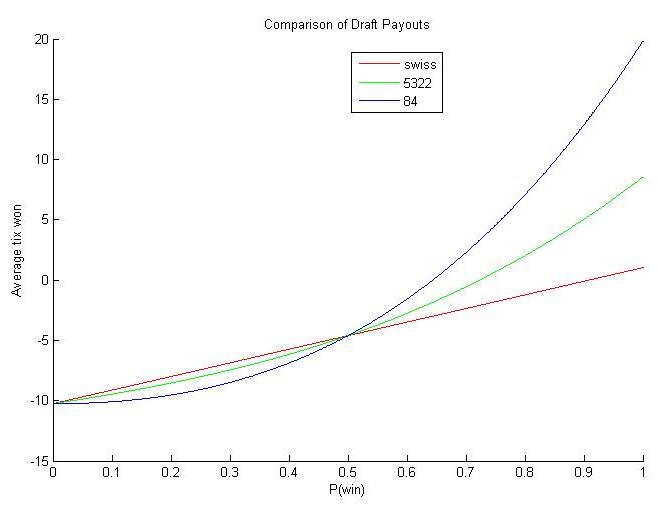 As can be seen by the graph, even if 4322s became 5322s, they would still never offer the best value. (Unless you believe your win percentage to be different in 5322s and 84s, which I don’t believe to be very true often. Skilled players would switch to other queues if the EV of one gets too high, destroying any advantage you thought you had).

The following graphs show the EV of each Constructed event (the M12 formats are: Pauper, Momir Basic, and any other MODO “specialty” format; all other events pay out in Innistrad packs) as a function of the player’s overall match win probability with a table below showing each event’s breakeven MWP. 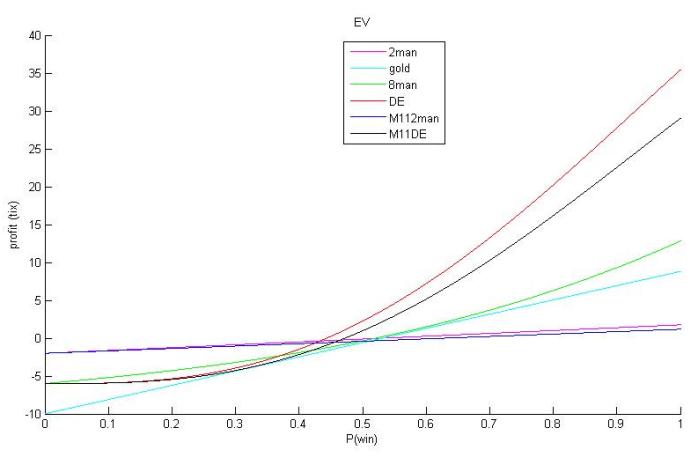 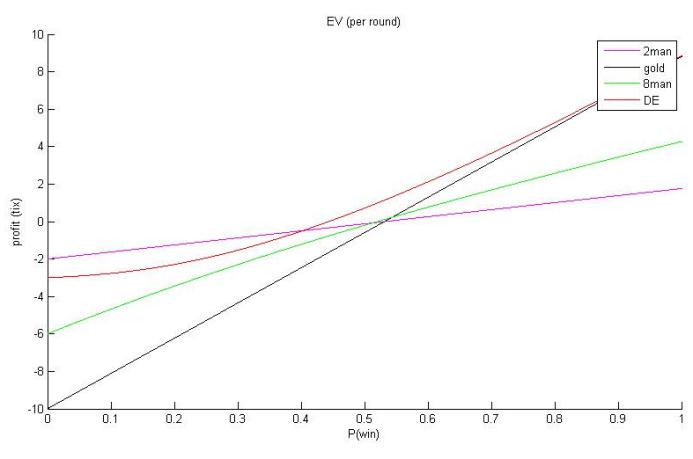 Based on this graph, the Constructed events that one should select in order to maximize profit are:

This chart shows that playing DEs is the most profitable option unless you are a losing player hoping to use 2-player queues in order to practice.*

*One assumption that has been made throughout this section is that MWP remains the same in different events. I find this to be a reasonable assumption as the quality of opponents is relatively comparable over all events. If I had to give rankings I’d say 8-player queues tend to have slightly better opponents than DEs, and the latter rounds in DEs (if you have a winning record) are harder than 2-man queues, but the average opponent strength is basically identical.

Play constructed DEs and don’t draft. If there’s enough interest in this topic, future installments of maximizing MODO will include how to track your results and profits and how to efficiently multi-queue events. 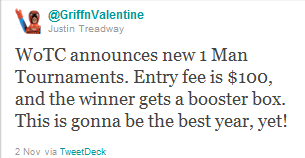 Zapgaze: Ricky Sidher no joey, u can use the same deck to play in multiple events now
Zapgaze: is this real?!?!
krazykirby: try it out
krazykirby: oh wait, you dont have any cards 😡

garetjax: i talk NOTHING like brim
six: just add a 🙁

PV: my mom said I can’t win worlds if my hair looks like this

I even have a blog: http://dieplstks.tumblr.com