Obviously there is a lot of thought tied up in that set of questions, but that’s the basic process I work through to try and quantify expectations of future card values. In order to help you better understand what I am talking about, let’s parse each question in turn to add context.

What rarity is card X?
As I’ve mentioned in this column in the past, rarity has everything to do with driving card values on Magic Online. Mythics in general and rares from sets with short print runs are the cards that can obtain the highest values. Popular uncommons from short runs are next, rares from medium-sized older sets, then everything else. Rares just ain’t what they used to be, but you can still make good money on them if you pick the right ones when they are cheap.

What type of set is card X in?
This one is nearly as big a deal as the rarity of the card. If it’s in a small-print set, the potential for the card to explode from even a moderate amount of play is much higher than it would be otherwise (see the history of Natural Order, Force of Will, etc.). This includes not only rares, but also uncommons as well (Wasteland is the most obvious example, but there are others).

In my estimation, the small-print sets on Magic Online are as follows: MED1, MED2, MED3, Mirage, Visions, Weatherlight, Tempest, Stronghold, Exodus, Invasion, Planeshift, Apocalypse, and probably even Odyssey, Torment, and Judgment (based mostly on the price of Entomb, 42 tix).

What format are you looking at regarding speculation for this card?
The more formats a card can potentially be good in, the higher the potential price. Thus when a deck like Hive Mind becomes popular in Legacy, and you are able to catch the initial wave of popularity, it’s good, but if it also becomes a popular deck in Modern… it’s very good.

Force of Will is 108 tickets online right now and legal in two formats (Classic and Legacy), one of which barely exists. If it were legal in Modern, it would probably be worth more than twice that.

For comparison, Jace, the Mind Sculptor, despite being in print, was worth around 95 tickets when legal in all formats. When his legality dropped to only Classic and Legacy, the price hit 33 tickets (though has since rebounded to 54(!) on speculation he will be unbanned in Modern).

What other cards of a similar rarity are popular in that format? What is the most expensive card of the same type of set and rarity as card X in that format?
I’m going to combine these two because they aren’t that different. The first question helps you set an average expectation for card price, while the second gives you a likely peak point. Note that each of these is a comparative relationship guess because we actually have no information on total print runs, yadda yadda. In short, instead of using nifty models like we are able to create in the real world, on Magic Online you use comparative value guesswork. Don’t blame me; blame Worth Wollpert.

Say you and your friends have been testing some Legacy and found a secret broken interaction between card X (which we will now call a rare from Visions) and something in Innistrad. You are certain the deck is good, so you want to speculate on the value of the card increasing. What is the highest potential price you could expect this card to command?

In this case, I would look at Natural Order at 65 tickets and say that is the likely peak if absolutely everything goes right. You are extremely unlikely to hit that peak, but that is the outside potential for what you could achieve. Obviously if the price of the card is .10, it takes very little movement for you to make a profit on the card. However, if the price is instead out toward 20 (say it’s a popular casual card), it takes a lot more money to invest heavily and consequently more risk to profit, so you should be much more cautious in getting involved.

How popular would the decks card X is in need to be for it to match or exceed similar cards?
This is a big one, and something I use as a baseline all the time. Because you get speculation bumps on Magic Online all the time these days, this rule isn’t etched in metal, but assuming you are bothering to do things right in the first place, it ends up being an extremely important part of due diligence.

Let’s take Jace, Memory Adept (JMA) as a current example. Wiping out any assumptions of power levels, etc., from a demand perspective, what would have to happen for JMA to command the same sort of price as older brother Jace, the Mind Sculptor?

Answer: He would have to see play in approximately 65% of the decks in Standard as well as being good in Modern and Legacy.

Okay, that’s just not happening (and it ignores the fact that JMA is in a broader set than JTMS and thus has more supply as well, but whatever), so we can expect that JMA won’t ever hit 95 tickets a copy. But what can we expect from the latest rendition of Jace? Well, for starters, he’s a five-mana planeswalker. From what I have seen, the best-case scenario for these guys is Gideon Jura, who peaked at around 30 from seeing regular but not overwhelming amounts of play. Looked at a different way, what is the peak valuation from recent core set cards? The answer there is either Baneslayer Angel (50) or Primeval Titan (37), both of which were popular creatures played in multiple decks. So there’s the answer to the max potential for JMA.

Now, the more important question is: what is a realistic expectation for Jace’s value?

Here you are looking more at mean and medians. Chapin thinks JMA will see play, so this is a good sign. Planeswalkers that see regular play usually settle somewhere between 15 and 25 tickets, and you may even see a small bump beyond that due to Jace love. (Some people do foul, foul things to their mythic rares. Like Joey Pasco!)

What is the current price?
Assuming you have already done all this homework, now you can look at the current price and figure out whether it’s a solid investment or not. Our Jace, Memory Adept example was at 10 tickets two weeks ago with a very deep supply at this number (meaning you could buy oodles and not really upset the market for a while, and everyone had them in stock).

At this price, is Jace a good investment? Well, let’s answer that by answering our final question as well.

How likely is it to become popular enough to give you 20% or more profit on the current price?
The answer to this question seems to be very. One of the major deck designers has already said he feels JMA is a staple of the new format. The price is in the September trough for core sets, and the card you are looking at is a planeswalker with a high expectation of play and is even a popular character among a certain subsection of Magic fans. In my mind, this is a definite buy (and I said as much on @NextLevelSpec). Your base expectation of 15 tickets is 50% more than the current price, and it’s not unreasonable to think the price could rise beyond even that.

So yeah, given our evaluation system, the recommendation is to buy as many as your bankroll management will allow at that price point and see what happens.

I hope you have enjoyed this insight into my speculation process. Obviously there are times you use shortcuts to make evaluations, but overall I felt like detailing the larger process would be useful in teaching you how to make your own calls for speculation.

My apologies on an erratic publication schedule recentlyâ€”as you all know, both American and European football are in full swing now, so work is extremely busy. I’ll still try to produce an article every couple of weeks, but I have no idea whether I will succeed or not. In the meantime, I’ll still float my thoughts on Twitter.

@NextLevelSpec for financial and Magic Online
@mixedknuts for everything else 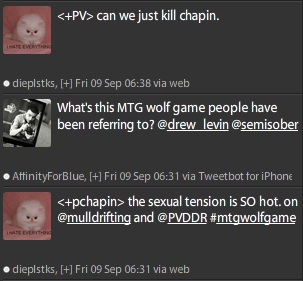 @timpaytonÂ  He was great! Yet couldn’t beat Wojciech. Got bottle of wine in luggage but smuggling Di Natale was pushing it…. (referring to Arsenal Champions League Qualifier vs. Udinese)

@arseblog I hate when you walk into a loo in a bar and someone’s just crapped. The pooticles are in the air. Ming.

@meddlingmage Idea for the night: I should buy a second, sh*ttier house, in case I meet some metal guys and don’t want them to know what a sellout i am

@mikelettingwell “Insert penis joke here” would be a cruel tattoo to get above your vagina.

Paul Cheon So there was randomly a giant fire as I entered my apartment where a pile of debris used to be. Had to go Smokey the Bear on that b****.

@markleggett In a universe where time-travel is not only possible but commonplace, Batman doesn’t seem to be too keen to go back and save Mom and Dad.

MOS_DEF (Tomi Walamies) it’s odd there’s no montage about guys editing together a montage
Riptide (Anton Jonsson) not even on family guy?
MOS_DEF it would have cultural significance akin to the marathon marathon, where a channel decides to show 42 marathons in a row
MOS_DEF or 26 for the countries that use miles

Jamie Parke: “I would motorboat a Beta Serra Angel SO fast.”

Johanna Virtanen clearly Alyssa Bereznak is behind this Planeswalker Points thing: every Magic player I know is posting “I’m a battlemage!” “I’m a sorcerer!” Now it’s easy for her to avoid the nerds!

Samantha Svarczkopf: just heard on the radio that a guy is using the Americans with Disabilities Act to sue White Castle b/c he’s too large to fit in their booths. That’s not a disability, genius. It’s an intervention by your ass and God.

@witzo ESPN: When talking about the coach that’s unlucky enough to be battling Parkinson’s, please have the camera man be more steady.