Speaking of Zvi, he played a G/R post-Aaron Forsythe deck at Worlds one year, and complained about how good Blastoderm was… but that it couldn’t win the game by itself and you actually needed a little Avalanche Riders damage to seal the deal. And then they gave him Fires of Yavimaya and he racked up a famous Pro Tour Top 8 (along with a bunch of other Hall of Famers, to be fair).

Just the prospect of attacking twice — guaranteeing that first attack, where a trampling 8/8 for five mana is so far above expectations — that I would even consider playing a card like Fervor, Hellraiser Goblin, or at least Lightning Mauler just to get Kalonian Hydra online. Again, I don’t actually think that you need a single other +1/+1 counter on your roster to make this good enough… But then again my first blown win-and-in (of many) at a StarCityGames.com Open was with a Bitterblossom deck that did not play any other Faeries (side note: Apparently back in 2008 BDM’s iPhone tunneling into Top 8 Magic was the equivalent of the entirety of SCGLive. Bring on 2008 sez I).

So point being we can actually just play Kalonian Hydra in a shell of good, reasonably synergistic cards rather than a bunch of seemingly not-inefficient 0/1 and 1/1 creatures for one (and two!) plus 4/4s for four that we all say are good enough but none of them ever actually make it into a real deck. For instance, we can play Kalonian Hydra in a G/W shell a la Caleb Durward, exploiting card power without actually compromising our drops:

The one thing I wanted to make a big deal of, though, is the Gavony Townships. One of the plans that this style of G/W has is to just go lethal with Arbor Elf (and now Elvish Mystic!) plus Gavony Township. I scored my first StarCityGames.com Open money finish this year with this strategy, outlasting a string of Jund and Esper opponents who all mis-assigned role. I played zero Smiters in that Open and all my losses were to aggro decks. #justsayin.

You can also play a straight Aggro G/W deck, like so:

I feel like there are probably too many Plains in this brew but the creature types are probably too all over the place for effective Cavern of Souls. I am actually also not sure about Restoration Angel; it could easily be something more aggressive, but I based this G/W on the Saito-esque Naya shell, with “Arbor Elf” (Elvish Mystic) graduating to four-of in the absence of Mizzium Mortars, Silverblade Paladin standing in for Boros Reckoner, a clear swap on three-drop Planeswalkers, and most importantly, Kalonian Hydra at the five over Thundermaw Hellkite.

The important elements are Silverblade Paladin and Ajani, Caller of the Pride (marginal Hexproof three-drops unite!). The ability to give Kalonian Hydra Double Strike can just be game. The first attack jumps directly to 16, and if you have a Selesnya Charm, full on “game, boys.” Again, a liberal application of Gavony Township can encourage a non-Kalonian Hydra +1/+1 counters sub-theme without abridging card quality.

Brian Kibler posted some impressive finishes with his B/G Predator Ooze deck at the end of last year; what about a Kalonian Hydra deck built on the Fight Club model?

I cut Deadbridge Goliath as Kalonian Hydra is more expensive than what Kibler played at his high end; there are multiple cards in this deck that generate +1/+1 counters on their own… Strangleroot Geist and Scavenging Ooze on two, Predator Ooze on three. So there is some potential synergy there. There are probably some decent modifications we can make to this strategy without even leaving monogreen… Most previous versions of this deck played with Wolfir Avenger (whose regeneration is highly synergistic with Ulvenwald Tracker) and Justin Plocher posted a high money finish at Pro Tour: Barcelona with a monogreen Fight Club deck starting four Four FOUR copies of Prey Upon. When you have a Predator Ooze? Hey! Green Doom Blade!

Hopefully you can see from some of these launchpads that despite the sharing and togetherness seemingly implied by Kalonian Hydra, the card is powerful enough to warrant play in non-Evolve-based decks. I would generally argue that with the presence of Top Decks preview card Imposing Sovereign potentially threatening from the two, the short overlap of M13 and M14 may have less Thragtusk and Restoration achievements unlocked than you might have initially suspected.

“There are two obvious decks that might include Young Pyromancer: a red aggressive deck that takes advantage of the body and ability, and a blue deck that completely abuses the ability, but doesn’t care as much about the body.”

To be clear from the outset, I don’t actually disagree with Matt. Young Pyromancer is more overtly powerful and playable than many two drops, and its particular brand of efficient power-to-mana-cost ratio and aggressive abilities certainly seem to ally with either red (its home color) or blue (traditionally Magic’s best borrower of other colors’ cool stuff). It’s just that coming from where I come from, the notion of challenging the statement and coming up with alternate Young Pyromancer paths is fun… and just might give us a decent springboard to a future big winner!

Remember when B/W and G/W Tokens were among the strongest strategies in Standard? In those bygone days before Jace, the Mind Sculptor, Ajani Goldmane was one of the most effective Planeswalkers, giving cards like Spectral Procession and babies from Cloudgoat Ranger the power — and I mean power — to hit much harder than a 1/1 usually does.

What we are ultimately trying to get Young Pyromancer to do is make a bunch of little 1/1 guys… which we can then use to set up some huge alpha strikes, maybe with some kind of Overrun to finish.

How about this piece: 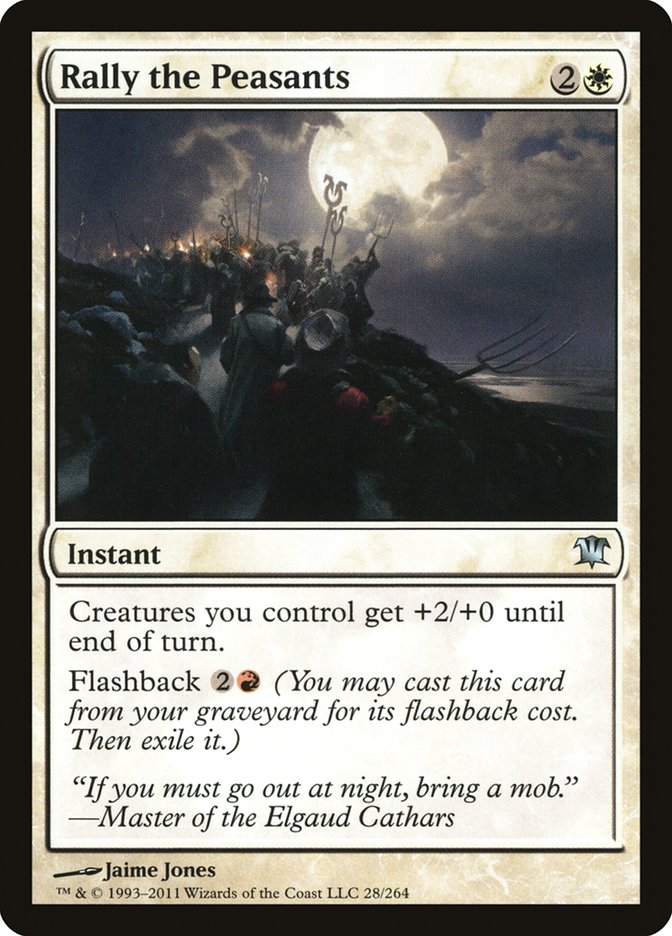 We’re going deep on this one, boys.

Paul Rietzl has the hardest-working Cavern of Souls in all the Planes of Dominaria.”

I couldn’t resist adding Falkenrath Aristocrat after I confirmed the black splash for Lingering Souls on this brew. Turns out that Falkenrath Aristocrat is actually best at working with little token creatures, especially Humans from Gather the Townsfolk. I honestly didn’t mean to make this deck too Aristocrats-esque… but Blasphemous Act goes so well with having a ton of small token creatures in play it seemed foolish not to.

Plan A with this deck is to just get a ton of tokens in play, swing with them, and swing again with Rally the Peasants doing double duty White-and-Red. If you can net bodies with Young Pyromancer, great, but there is a ton of token card advantage built in to the vast majority of the instants and sorceries chosen for this deck with or without Young Pyromancer. And you of course have both the front and back ends of Rally the Peasants; one Lingering Souls and one Rally the Peasants can easily add up to something like eighteen evasive damage without very much work.

Another distinct strategy for red decks is straight burn. Burn decks can look like other active decks, and because they are [predominantly] red often get confused with red beatdown decks. Consider the vast differences between different “Red” decks Goblins, Red Deck Wins, and The Lava Spike Deck. Of these, The Lava Spike Deck behaves more like a combo deck, lacing together a largely non-interactive win by throwing cards at your face. Even though The Lava Spike Deck attracts players like Red Deck Wins fan Patrick Sullivan, don’t confuse the two! Really, it is not so different from a Storm combo deck.

While aggressive, this idea is a half-click off of what you might expect for Young Pyromancer. In a traditional Adrian Sullivan Philosophy of Fire model, every card in your deck has to be worth two damage; ergo, you only need ten cards to win (and you start with seven). Not only are some of the cards in this deck worth more than two damage (up to and including getting in with Young Pyromancer twice) the entirety is made easier by the presence of Boros Reckoner + Blasphemous Act in a potentially tokens-discounted environment. You really only have to count to six [two, specific], not ten two-point spells #thatwaseasy

On the subject of Warleader’s Helix, I just want to end with my current Warleader’s Helix deck. It is pre-M14 so you can play it this weekend if you so choose. I have been competing really effectively against all kinds of opponents on MTGO, and have been saying here and there that if the Invitational were tomorrow, I would play this deck there. But I wasn’t confident in the conviction of that until I beat a Jund deck the other night, which had gotten me early with Sire of Insanity and Rakdos’s Return both games (I drew out with Sphinx’s Revelation and Flashback, and ended up victorious, via good old racing).

This is the kind of deck GerryT once reviled, if respected. It’s “impure” in its execution, especially as we have all kinds of two- and three-color Restoration Angel Flash variants we can play. It doesn’t counter target spell very often; in the parlance of Patrick Chapin, this would be a Non-Blue Control Deck… despite being more than one-third blue. Yet it has coherent plans across most or all of the metagame, and chomps on the extremes via superiority of strategy (plus-value trading on one end, inevitable threat deployment on the other).

Good luck this weekend (at least if you choose to give this one a whirl).