Before we get started, I want to apologize for an omission in last week’s article. I didn’t pay for my Young Pyromancers! Let’s rectify that.

One cool thing about Young Pyromancer is that I got in pretty early. It’s up to $2.99 here on StarCityGames.com, but when I first played with them, they were still $1.99

With that settled, I’d like to take a look at the different directions you can take a deck. Let’s get started!

As you can see, I’ve made a few changes. Let’s go over them!

Guttersnipe has overperformed and is one of the best cards in the deck. In general, a 2/2 flier is better than two damage upstairs, but once you’re talking about five or more activations, you want the immediate damage. There are things that erase or ignore a massive board of 2/2 fliers. Being a mana cheaper is huge as well. Honestly, the biggest thing holding me back from the fourth Guttersnipe was my budget. I’ve definitely felt that fourteen creatures is correct. Much like the mana screw/flood, the deck can get creature screwed/flooded at times. I’ve hit the sweet spot where the number of times I’ve had too few creatures is about the same as the number of times I’ve had too many creatures. That’s a sure sign I’m pretty spot on. Hence, one Talrand, Sky Summoner leaves the deck.

It’s unfortunate that Guttersnipe is more expensive than it was when I started FNM Hero (it was $1.49 then!), but I think it’s worth it and my budget can afford it.

I think that Essence Scatter is an excellent card in Standard right now, with Cavern of Souls falling by the wayside somewhat. I would strongly recommend a few of them in any Flash deck, and they are also excellent here. While counterspells don’t play well with Desperate Ravings—generally the correct play if you’re ahead with a counterspell in hand is simply not to cast Ravings even if it means wasting mana—Essence Scatter is amazing with Goblin Electromancer. Anyone who has played Spell Snare, Force Spike, or Spell Pierce can tell you how amazing it feels to counter a spell for a single mana and how much of a tempo swing it can be. Much like the Negates in the sideboard, Essence Scatter can be a fantastic tempo play.

To make room for them, I moved a few Pillar of Flames to the sideboard. Pillar can be the best card in the deck or the worst card. For the moment, a 2/2 split sounds reasonable. I think that Pillar will be moved the most between the main and the sideboard, but I will try to have four copies in the 75. When it’s good, it’s very good.

I’m sick of it. I’m going to try something against Bant Hexproof. I’ve been doing well enough that I can no longer afford to punt matches against the most popular deck. In addition, I’ve found that I can compete if my draws are excellent. While two Aetherizes is a small step towards helping the matchup, I’m not sure if Bant Hexproof can reliably beat Aetherize. I’m hesitant to side it in very often outside of the Bant Hexproof matchup, but I’m interested to see how often I’m tempted. I could potentially see it against the Elves deck for example.

Combined with Aetherling, I’ve got a lockdown on the Aether.

This is basically here to create a coherent plan. Against control decks, I want to take out quite a few cards—I have many removal spells that are pretty poor, and Guttersnipe does not provide the type of value I need. Control decks can easily deal with a Guttersnipe, and I’m not looking to race. For example, against Flash, I would love to take out two Pillar of Flames, three Turn // Burns, and two or three Guttersnipes.

With the way my sideboard is constructed, I will generally want to bring in two Negates, two Dissipates, two Aetherlings, and now the Desolate Lighthouse. The Lighthouse provides a 23rd land, which I definitely want with Aetherling in my deck, in addition to an outlet to discard some of my weaker cards. I would prefer to only use my creatures as bait for a window to resolve Aetherling. I can’t expect them to go all the way. If I had the luxury, I would actually want a ninth sideboard card for the matchup, but when you’re willing to play things like Aetherize for other matchups, the rest of the sideboard suffers.

That’s the direction I’ve decided to take my deck. I’ve drawn up quite a few other decklists, but for one reason or another, I decided to go with the one above. The following decklists are paths I considered but didn’t take.

This is basically a Runechanter’s Pike deck. Adding Young Pyromancer allows the deck to have enough random creatures lying around to pike up a Pike. Invisible Stalker is great with a Pike but terrible without one. I’ve lowered the curve as much as possible to maximize the potential of Runechanter’s Pike and to accommodate for not having Goblin Electromancer. The aggressiveness of this deck supports Burning Earth much more than my current build, so Aetherling hits the sidelines.

This is doable, as half the cost is in Burning Earth. I would probably look to trade some cards (such as Aetherling or the pack of sleeves I won as a door prize) for the Burning Earths. I am hesitant to move towards this style of deck simply because of how well some of the best cards line up against it. Thragtusk is brutal to slog through, and Scavenging Ooze can make Runechanter’s Pike look really bad. While Brian Braun-Duin has had success with his graveyard against Scavenging Ooze, it’s absolutely a hurdle for this deck.

This is basically a deck that’s looking to go long and finish with Aetherling. Augur of Bolas might be stronger than Young Pyromancer in this deck, as getting value immediately after a Young Pyromancer is somewhat difficult without one-mana instants like Thought Scour. Desperate Ravings may not be the best fit here because I’ll want to hoard certain cards (such as Opportunity and Aetherling). However, there isn’t much else that can draw cards efficiently. If I could play eight Think Twices, I would consider this style of deck more.

Absolutely doable for this list, but I would likely want to upgrade pretty significantly. Cards like Snapcaster Mage, Augur of Bolas, and Jace, Architect of Thought most likely belong.

This deck is definitely Travis Woo inspired. Unlike every other deck you see here, this deck is willing to throw away cards in order to assemble a combination. One thing that I think is pretty cool about this deck is that Feeling of Dread cannot be cast, nor can the Dangerous half of Armed // Dangerous. In short, you’re looking to play Artful Dodge on a Nivix Cyclops and then as many spells as you can muster. Since we’re only looking to protect our creatures with our permission, Mizzium Skin seems excellent.

This is an easy switch, but it’s not my style. Judging by the comments on my articles, card advantage is incredibly overlooked by many players. Cards such as Cyclonic Rift, Izzet Charm (in looting mode), and Rapid Hybridization often leave you without options down the road because they are card disadvantage. You may be better off this turn, but it’s hard to play a long game when you are voluntarily giving up cards.

Card advantage isn’t the end all of deckbuilding—Bant Hexproof doesn’t care how many cards you’re ahead—but I feel that many players think that card advantage is only for control decks. Not true. Look at Brian Kibler decks. They are almost always creature based, slower than your average creature deck, and full of ways to get up extra cards. There’s a reason Brian loves Domri Rade and Voice of Resurgence.

Basically, this deck can be potent, but I don’t see it being in the same league as Bant Hexproof. It’s close the same deck minus the hexproof part.

Those are a few different ways I could have taken the deck but chose not to.

Before I go, I want to talk about a card that has been asked about quite a bit: 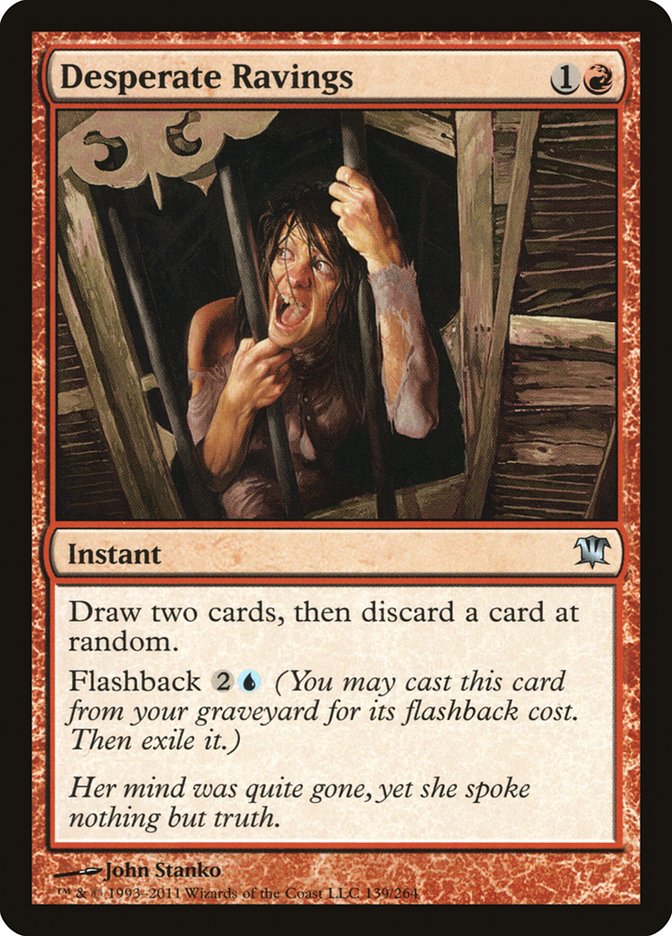 Desperate Ravings is one of the absolute best cards in the deck. In fact, much of my deck has been constructed to maximize the power of Desperate Ravings. Don’t be scared of its randomness. If you end up discarding a card that you just drew, so be it. Then you have Think Twice. You never had that card, and you basically milled yourself for one. Milling yourself is not a bad thing, as you’ll rarely go through your entire deck. Heck, the random card you discard could be a card with flashback, providing value. Basically, Thought Scour is sweet.

"But Adam, what if I have a card in my hand that I don’t want to lose?"

As a card-drawing spell, it’s likely to be played much later in the game than your cards that actually impact the board.

"But Adam, not every card is good right away, and I REAAAAAAAAAAAAAALLY don’t want to discard this Talrand I’m saving for later."

Don’t cast Desperate Ravings. Nobody makes you cast everything you’re allowed to. Alternatively, how many times do you live? If you have five cards in your hand, you are only one in seven to discard your precious card.

The true power of Desperate Ravings comes when your hand is bad. You draw two cards and are likely to discard something that you clearly don’t want to cast. This scenario pushes Desperate Ravings closer to Divination with flashback than Think Twice. Any amount of variance is worth it when we’re talking about that kind of power.

Hopefully, that clears up a bunch of the questions you may have had about the deck. If you have further questions, don’t hesitate to ask! Next week I’ll be back with some more tournament action!