By this point, most people have discovered that red is the best color in Adventures in the Forgotten Realms Draft. Maybe this will change moving forward, but for now it just seems like red’s commons are a tier above the rest. However, the format has already started to self-correct. Drafting red is becoming more and more difficult. And personally, I don’t think black is that far behind once you adjust how you evaluate black commons. 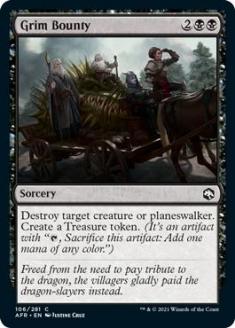 I have Grim Bounty as the best black common, and second best common overall. I think most people agree with that. But where I deviate is in how I prioritize the next commons. I will first-pick Deadly Dispute, and believe it’s a Top 10 common. Once you start taking Deadly Dispute highly enough to get multiples in most drafts, Shambling Ghast becomes a premium card. I have won many games already by curving Ghast into Dispute and casting a five- or six-drop two turns ahead of schedule. That’s a real plan, and it’s a good one.

Basically, black is all about leveraging advantage from Treasures, but not in a highly synergistic sense. Hoard Robber is just a phenomenal two-drop that snowballs through mana advantage and Hired Hexblade is a great rate for a Phyrexian Rager. Black decks aren’t these all-in Treasure synergistic decks. They’re just decks filled with good cards that leverage Treasures, mana advantage, and sometimes splashing. The black archetypes are as follows:

As a note, I like Dimir and Rakdos a lot more than Orzhov and Golgari, but all the decks are playable. With this in mind, let’s jump into a draft!

Yuan-Ti Malison is a pretty good rare that fits perfectly into any blue deck. It takes a few turns to get going, as it’s not until the third venture that you really start getting good value, and that makes it less premium than you might think. I wouldn’t fault anybody for taking this, but I currently have blue as the worst color and haven’t been impressed by any of the blue venture decks.

Power Word Kill and Skullport Merchant are both in the Top 5 uncommons in the set, so you really can’t go wrong between them. Skullport Merchant has a higher ceiling, but instant-speed hard removal for two mana is such a rare effect that I landed on Power Word Kill. Furthermore, I would splash Power, but not Merchant, leading me to believe it’s a stronger start to the draft due to flexibility. I think this pick is close and in a week or so we will know what’s correct.

Air-Cult Elemental isn’t a good option here, but I wanted to highlight the card because it has exceeded my expectations. Five toughness is a key threshold to block basically everything, and so this card is well worth the mana cost. I’m not looking to take it this early, but I am looking to play at least one copy in most of my blue decks.

Cleric Class is a powerful card, but you can’t justify playing it only as a reanimation spell. It takes too much mana to reanimate, so it’s only enticing if you can leverage the +1/+1 counters on gaining life. As I wrote on Tuesday, I don’t prioritize synergy in this format. If a bunch of lifegain cards fall into my lap, then I’ll be happy to play Cleric Class, but I’m not going to speculate on doing that when I can just take a good black card for my deck.

Between the three available black cards, I believe Deadly Dispute is the best by a noticeable margin. As I said earlier in this article, Deadly Dispute is a top common in my eyes. Check for Traps is a cool piece of interaction, but it’s not premium enough for the cost in a format this aggressive.

Asmodeus the Archfiend is just too risky. Sometime I’ll try to make the Asmodeus work, but asking for life and mana in order to draw cards for the rest of the game is just too much. Especially when, in order to actually take advantage of the powerful part of the card, you need to have a lot of black mana and life to spare.

I want to note that there’s also a Price of Loyalty in this pack. I make a habit of noting when I see this card when I’m drafting black, because if I wheel it, I know I can position myself to have a wonderful Rakdos deck.

Between all the black cards, I have been most impressed by Vampire Spawn. A 2/3 for three mana is relatively embarassing nowadays, but the drain-two on entering the battlefield has been more impactful than I initially expected. Clattering Skeletons is a comparably poor body for the cost, and venturing on death is worse than the drain the Spawn provides. Lastly, Eyes of the Beholder is just too expensive. If this ends up in my deck, something went wrong.

For the non-black options, each card is quite good when paired with black. Golgari really wants Hill Giant Herdgorger on the top of the curve, as it’s the most impactful six-drop to ramp out via Treasures. Ranger’s Hawk is a key component to Orzhov as it’s a repeatable way to venture on a well-costed aggressive body. And Tricker’s Talisman is another Ophidian-like effect for the Dimir deck that’s often built to abuse exactly that type of effect.

Between these three options, I like the Talisman the best. As I said at the beginning of this article, I like Dimir better than both Orzhov and Rakdos. Furthermore, I have just been impressed by the Talisman. It’s particularly backbreaking because of how much it supports snowballing. If I’m able to hit with my Soulknife Spy this turn, I might be able to hit with both it and the copy the next turn too. It can also yield a massive impact on the battlefield alongside any flyer (particularly Air-Cult Elemental).

This pick comes down to Trickster’s Talisman and Vampire Spawn. While I like the Spawn, I won’t miss it much, and if I end up Dimir I will cry over the lack of the Talisman. That makes this a clear Talisman in my eyes.

In the end, I didn’t end up Dimir. The Price of Loyalty in Pack 1, Pick 2 ended up wheeling and I pivoted into Rakdos. Although red wasn’t very open, that didn’t matter, because black was. While I didn’t end up getting the trophy, it felt like a deck worthy of one.