When I found out they printed Jacob Hauken, Inspector, I assumed I was morally obligated to build a 100-card shrine as a tribute to the man with my namesake. Since he lets me fire off expensive spells like Jell-O out of a T-shirt cannon, I quickly found Enter the Infinite. What goes great with drawing your entire library?

I’ll wait for all the grizzled Commander veterans to stop groaning. 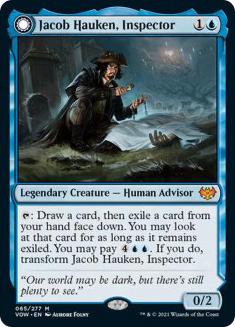 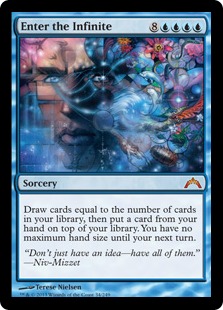 The first time I cast Thassa’s Oracle, it felt like everyone gave an exasperated “Thoracle” in unison. Being new, I didn’t know the baggage my little buddy from Theros Beyond Death came with. The Oracle was mostly a card that lost me draft games.

With a renewed interest in cards that said “win the game” on them, I remembered Jace, Wielder of Mysteries was available. A little more expensive, a little less groan. What else was out there?

Put Some Rank on It

Today, in Part 1 of a two-part series, I want to take you through my entirely unofficial rankings of every card that guarantees you victory at your table, regardless of how many opponents remain. There are silly cards, illegal cards, and competitive cards that can fit any play style or group. Hopefully, you won’t feel like the one off-script member of a barbershop quartet. 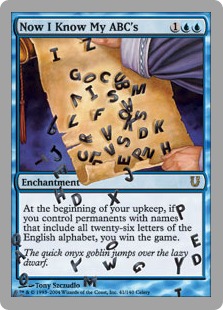 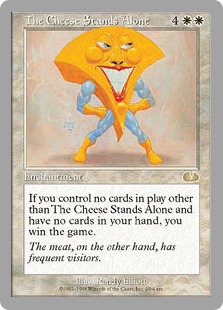 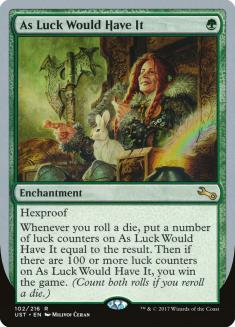 While none of the Un-sets—Unstable, Unglued, and Unhinged—are officially legal, I think they’re worth discussing if you have a solid playgroup that doesn’t mind when things get weird. With Commander Legends: Battle for Baldur’s Gate around the corner, I can see a world where As Luck Would Have It would be a completely reasonable card to include in a die deck.

Now I Know My ABC’s creates a hilarious sub-game that I’m a huge fan of, particularly with Grazilaxx, Illithid Scholar doing some serious work. The Cheese Stands Alone is one of the rare Un-cards to receive a functional reprint, which we’ll get to shortly. 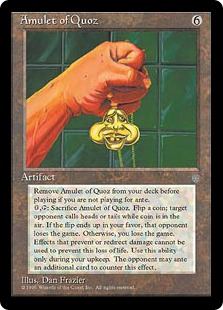 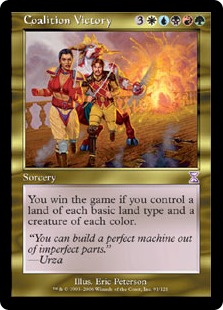 I’ve never seen a Commander game played for ante, but this could be fun in a Krark, the Thumbless deck. You know, if it wasn’t banned. I doubt we’ll see Coalition Victory unbanned anytime soon. In the event that it is, don’t worry: you’ll be able to find enough content about it to fill two Internets.

Tied for #25: Hedron Alignment and Battle of Wits 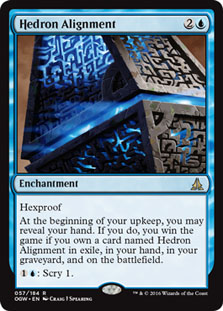 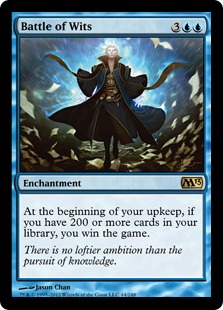 I’ve been down every Reddit rabbit hole and can’t figure out how to make either of these cards work without everyone in the pod agreeing to shenanigans. Considering how much fun the rest of this list is, I encourage you to look elsewhere to get your kicks. 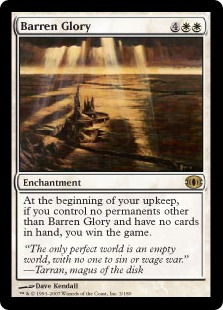 The ultimate “risk it for the biscuit” card, Barren Glory combos revolve around having a permanent that exiles it from the battlefield while sticking around itself, like Oblivion Ring or Leonin Relic-Warder. Then, you need to cast one of the saline-inducing cards in Magic: The Gathering, like Apocalypse or the recently unbanned Worldfire, to get it back onto the battlefield. While it represents one of the most distinctive paths to victory in the game, it’s a Rube Goldberg machine assembled on the San Andreas Fault, leaving your opponents chances to disrupt you at every stage. The Cheese was just fine standing alone without this printing. 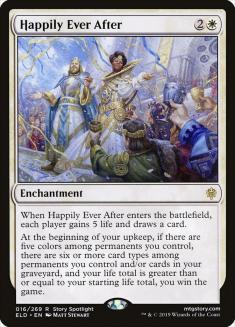 In terms of winning the game, Happily Ever After asks far too much from us. It’s like a chore wheel, but the wheel dislodged from the stand and rolled next to a massive arrow pointing at the whole thing. We already have victory options that trigger when we have life above our starting total, without the color requirements and card types. What felt like Coalition Victory at Home turns out to be a symmetrical card draw enchantment. I don’t think you can or should build around this, especially when five-color decks have so many fun things to do without it. 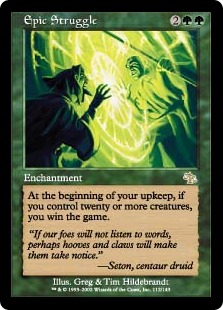 As Mitch Hedberg once said, “Rice is great when you’re hungry and want 2,000 of something.” Epic Struggle is your hunger, even if starting your upkeep with twenty or more creatures in play usually means you’re winning the game. There are plenty of times you’re struggling to actually win because you’ve generated a lot of generic creatures or tokens that don’t have haste, though. Sometimes, your opponent has a Moat and you’re stuck with an Ivy Lane Denizen, Herd Baloth, and a million tokens. Play an Altar of Dementia, you say? I agree. Epic Struggle is bad redundancy, but it’s redundancy nonetheless. 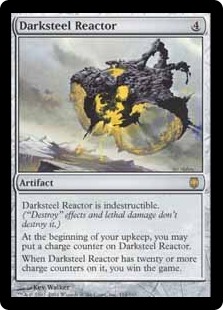 You have to love when your obscure combo piece includes the word “indestructible,” so Darksteel Reactor isn’t completely hopeless. You also don’t need to wait until your upkeep for winning to occur, a nice bonus when looking at certain cards on this list. With any luck, you do not naturally amass twenty charge counters on it, although it’s a sick inclusion when facing your buddy who never wants the game to end. No, your best route is casting an Eternity Vessel, which should have no problem netting you more charge counters than you need. From there, you can Dismantle it, moving the counters to your Reactor, or True Polymorph it, making it a copy of your Reactor. Your best Commanders force you into one lane or the other, though, with Vorel of the Hull Clade or Kurkesh, Onakke Ancient both giving a boost. 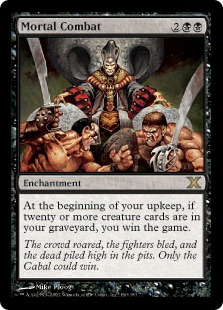 I wish Mortal Combat was more playable, as any excuse to bellow its namesake and then lead the table in an a capella version of the classically 1990s techno theme song is a win in my book. Self-mill is a well-supported theme for black, so why so low? The danger of milling your Mortal Combat before drawing it is very real. Better to play into that and run a decent number of ways to bring it back from the graveyard in a Sidisi, Brood Tyrant deck. I’m surprised I don’t see this more often, although it’s also understood that getting creatures in your graveyard is great because you can get them back out of there or take advantage of other mechanics like dredge or delve to get value. If your creature count is high enough, I love Mortal Combat as a spicy inclusion that won’t break the bank. 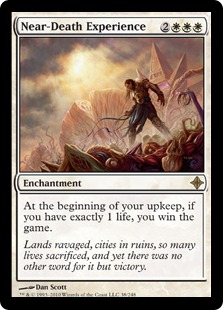 A similar path to that traveled with Barren Glory exists here for Boros mages, incorporating Worldfire or Soulgorger Orgg to decimate yourself in the name of one big Near-Death Experience turn. Where I think it’s quite fun, though, is in Orzhov decks that can play with their life total using an Aristocrats base to manipulate exactly how low they go. Black is excellent at giving you ways to exchange pain for pleasure, with Innistrad: Midnight Hunt giving us a great combo piece in Lord of the Forsaken, allowing us to ping at will. N-DE is interesting, because your opponents are playing a dangerous game by attacking you unless they’re convinced they can end things. It’s my kind of card, and one I’d love to see played more frequently. 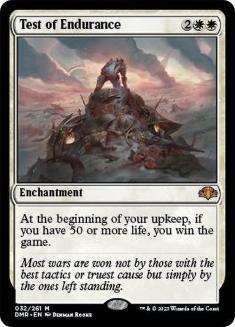 Muscle babies are here to make your dreams come true. Starting at 40 life makes Test of Endurance much more tenable in Commander than in traditional one-on-one play, but this primarily exists as a backup plan if you don’t hit a better version coming up on this list. Still, coming out for only four mana leaves you the potential to steal the occasional game when your opponents are too busy setting up their mana rocks and ramp. What I’m saying is that I’m not not playing this in a white lifegain deck. 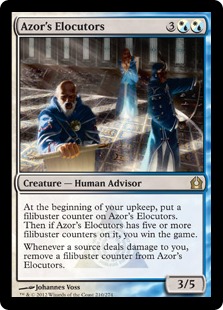 Azor’s Elocutors is a fine card that I will probably never sleeve up. First, I’m not a big fan of the filibuster. Second, taking any damage removes a counter, so opponents are highly incentivized to keep you in check. Third, a 3/5 body can hold its own, but it’s certainly not impervious to removal. If you are dead set on playing the Advisors, Solitary Confinement plus a suitable number of cards in your hand can hold down the fort until you hit your magic number of five. Add in a pair of Lightning Greaves, and your opponent must pray for a sweeper. 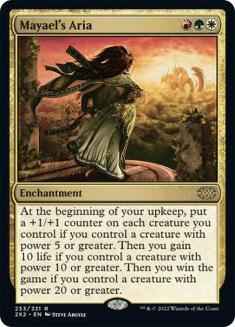 Unlike most of the cards we’ve seen so far, Mayael’s Aria provides a tangible benefit as soon as it drops if you’ve met the initial condition of having a creature with power five or greater. That alone makes me feel okay about jamming it into most of my Naya decks without having to stress too much about whether I’ll draw my Colossification, Mossbridge Troll, or Serra Avatar. With Jetmir, Nexus of Revels as one of our most recent previews in these colors, I could see going all in on the bad kitty and going wide or tall, depending on what the situation called for.

Check back next week, when I cover our Top 15, including the latest “you win” to be printed and another I think you’re going to flip out over.