Streets of New Capenna has been fully released into the wild, and there are a ton of great goodies in the main set and Commander decks to satisfy all sorts of Commander fans. What’s really surprising, given the gold focus of the set, is how many sweet mono-color legends are available, especially mono-white!  Last week, I did a deep dive into Bennie Bracks, Zoologist; this week, I want to dig into Giada, Font of Hope! 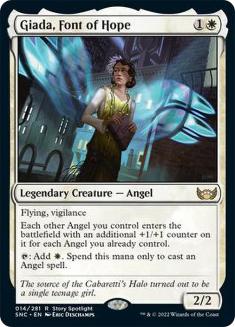 There is a lot of value packed into this card.  Mana rocks that cost two mana are quite potent in Commander and you see them in most decks: Arcane Signet, Fellwar Stone, Mind Stone, Thought Vessel.  With Giada, you have one sitting in the command zone!  While there is a restriction on the use of the mana in that you can only cast Angel spells with it, I think it is a really clever design choice in giving white some mana acceleration that feels very… white.

Having a mana rock for two mana stapled to a 2/2 with flying and vigilance would be quite playable, but there’s even more — each other Angel you control enters the battlefield with an additional +1/+1 counter on it for each Angel you already control. This is a pretty incredible bonus for a tribal deck and given that many Angel cards already have sizeable bodies, it can build a potent battlefield presence quickly.

A nice subtle thing about Giada’s ability suite is that you’ll be casting threatening Angels ahead of curve that will often push an opponent to use their targeted removal on creatures other than Giada. Also, the fact that Giada is so cheap to cast means it’s going to be easy to recast, which is yet another reason not to waste targeted removal on it.

Angel fans have all sorts of amazing legendary Angels to build tribal decks around, but relatively few true “tribal lords.”  I feel that Giada, Font of Hope immediately rockets to the top of the list of best Angel tribal commanders, especially if you’re okay with keeping it monocolor.  Let’s dig in!

The first thing we’d look for are cards that boost Angels or care about Angels, and if they’re actual Angels too, even better. Looking for low mana Angels we can cast early, Youthful Valkyrie a solid choice, and Standard all-star Righteous Valkyrie is another must-have. Lyra Dawnbringer is probably accustomed to being in the command zone for a mon-white Commander deck, but does fine work in the 99 of a Giada deck as well.

With enough lifegain in your deck, The Book of Exalted Deeds can churn out 3/3 white Angel tokens that will often be quite a bit bigger with Giada out.  Plus, if you have an Angel you’ve protected with something like Swiftfoot Boots and you’re in danger of losing the game, you can use the Book’s activated ability to create your own Platinum Angel.

There are a lot of other tribal support cards you can pepper into the deck, and I’m particularly interested in Herald’s Horn and Urza’s Incubator since they help shave mana off the cost of Angel spells and there are a lot of really good Angels that are high up the mana curve.  Heirloom Blade is just a fantastic way to refuel your hand after a removal spell has killed the equipped creature.

Pyre of Heroes is awesome because there are so many great Angel cards that have special utility attached to them, so you can sculpt your board based on the state of the battlefield.

Speaking of Angels with special utility attached, here’s a bunch of them to consider!  In particular I like the four mana choices like Linvala, Keeper of Secrets and Angel of Finality since you can often cast them on turn three with Giada.

Outside of specialized utility Angels, there are also lots of Angels that are just really good creatures, and one of my favorites is Sublime Archangel. It’s only four mana, so you can cast it early with Giada, plus it lets you attack with one gigantic creature while you keep the rest of your army back for blocking if you need to. In particular, I love that this is one way you can really boost Giada to open up commander damage as a victory condition.

If you want to round out your Angel count lower on the mana curve you can dip into creatures with the changeling ability like Mirror Entity and Bloodline Pretender.  Irregular Cohort brings two Angels stapled to one card, which helps leverage Giada’s +1/+1 counter ability.

There are also a fair number of cards that create Angel tokens that we might want to consider, though keep in mind that Giada’s mana ability can’t be used to cast them.  I’m pleased that the white card from the “commander storm” cycle has finally got a great home here with Giada given that Giada is likely to die and be recast several times over the course of a game, letting Empyrial Storm rebuild a huge battlefield presence in one card.  I also really like Valkyrie Harbinger since it’s an Angel that can pretty easily churn out extra Angel tokens.

Outside of Giada’s +1/+1 ability just making your Angels bigger, there’s cards we can use to really take advantage of it even more.  Cauldron of Souls is a slam dunk here, giving all of your creatures including Giada persist in the face of a battlefield sweeper and when they come back with -1/-1 counters Giada’s ability will add +1/+1 counters that will knock off the -1/-1 counters (other than the one on Giada). Twilight Shepherd can be sacrificed with Giada on the battlefield as many times as you want.

Sanctuary Warden and Angelic Sleuth are two brand new cards that slot perfectly into a Giada deck since Giada will be handing out counters on your creatures.

Another secret sub-theme of any Angel deck is that they all fly, so we can tap into cards that care about fliers.  Sephara, Sky’s Blade is a slam-dunk here, giving all your other fliers indestructible attached to a huge body with lifelink. If you happen to be playing Halo Fountain, you can even use Sephara’s alternate casting cost to tap down creatures you can untap to activate Halo Fountain.  While most combat tricks don’t warrant card slots in Commander decks, Rally of Wings does a lot of heavy-lifting in a deck with all fliers and is probably worth a two-mana slot.

Serra the Benevolent is a flavor home-run for the deck, creating a Serra Angel token and then using its plus ability later to boost your Angel army.

There are other advantages to playing a monocolor deck, such as maximizing the power of cards like War Room, Endless Atlas and Commander’s Plate.  For a mono-white deck specifically, we get to run the incredible Emeria, the Sky Ruin and Emeria Shepherd, along with cards like Gift of Estates that can help ensure you get to play enough Plains. Mass Calcify is a great removal spell for monowhite decks that can really accelerate your endgame.

While Giada helps with mana ramp, the fact is that an Angel tribal deck is probably going to be quite heavy higher up the mana curve, so we’ll want to squeeze in a lot of other ways to ramp your mana. Shaving the cost of white spells is handy so Pearl of Medallion and even Oketra’s Monument are a big help. While I almost never personally play Smothering Tithe, I’d make an exception for a mono-white deck like this one where you can really use that extra mana to cast big Angels.

So, do you agree that Giada is the best monowhite Angel commander we have available to us now?  What other cards would you slide into your Giada deck?

Do me a solid and follow me on Twitter! I run polls and get conversations started about Commander all the time, so get in on the fun! You can also find my LinkTree on my profile page there with links to all my content.

I’d also love it if you followed my Twitch channel TheCompleteCommander, where I do Commander, Brawl, and sometimes other Magic-related streams when I can. If you can’t join me live, the videos are available on demand for a few weeks on Twitch, but I also upload them to my YouTube channel.  You can also find the lists for my paper decks over on Archidekt if you want to dig into how I put together my own decks and brews.