Streets of New Capenna Prerelease was last weekend, and I hope everyone who was able and interested got their hands on their first taste of the new set!  From my local game store, I picked up a couple of Prerelease kits to play at home, as well a box of Set Boosters.  Wizards of the Coast (WotC) gets a lot of flak about the many ways in which you can buy cards from them, and I certainly feel compassion for the folks like StarCityGames.com who have to sort the physical cards and figure out initial prices on all the various printings (and load all of that into their store databases).

The Appeal of Set Boosters

For me personally, as a fan of Magic for 28 years, the Set Booster packs are really satisfying. I’ve been cracking booster packs for a long, long time, but around the time of the advent of the mythic rarity, cracking a box of booster packs lost its appeal. It began to feel like too much of a lottery game, and if you weren’t fortunate enough to open up a chase mythic in your box, you felt like you’d wasted your time and money. Which is fine—buying singles is the most economical way to go anyway, and has been for a long while. But there’s something about the mystery and discovery of cracking multiple booster packs of Magic that I’d been missing that WotC tried to address with Project Booster Fun.

If I recall correctly, first they came out with Collector Boosters, which were neat but didn’t fit my needs exactly—I’m not particularly enamored with foil cards, and paying such a premium for foiled-out commons, uncommons and a couple of rares just wasn’t worth it for me personally. But then came the Set Boosters, and they hit the perfect note for me. There’s more of a balance between commons and uncommons, you can get rares/mythics in multiple slots, there are the reprint cards from The List that show up frequently, and I even love and collect the Magic Mini Games that come in each set.  With a price point much closer to a Draft Booster than a Collector Booster, it just hits my sweet spot.

A First Taste of New Capenna

Opening up my Streets of New Capenna Set Booster box, it felt like the experience was even better!  It felt like the odds of getting multiple rares in a pack had risen. Further, all eight cards from The List were hits—including four of the Magic reskins of the Stranger Things Secret Lair cards! 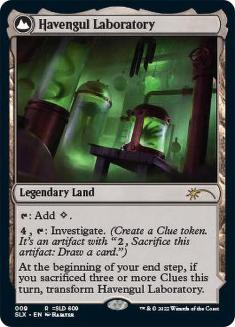 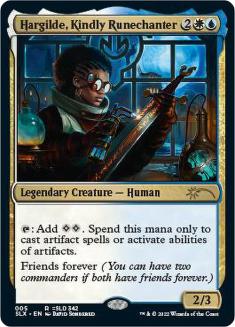 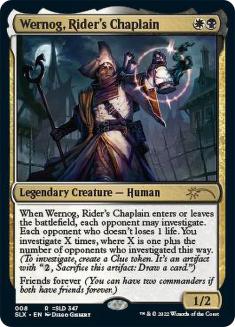 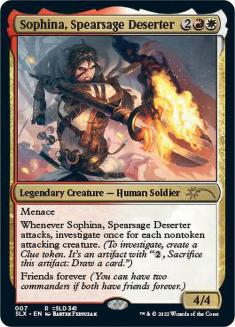 I was also thrilled to get copies of all three of the set’s Magic Mini Games, which was the first time that had happened. I usually have to hunt down one or two of them each time.

What was particularly fun was that I opened up a foil copy of the Magic card that was named after me, Bennie Bracks, Zoologist! 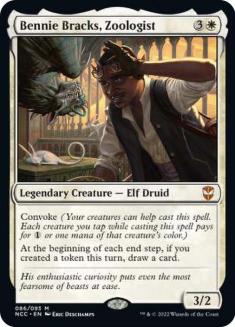 Okay, I know it actually wasn’t named after me, insert sadface. But it’s still thrilling to finally have a Magic card that features my first name on it, and it seems only natural that I’d have to build a Commander deck around Bennie!  Luckily for me (and you), the card is actually pretty sweet and has certainly been juiced up by WotC’s recent initiative for improving white cards in Commander, particularly card draw.

Bennie’s got convoke, which makes it easier to cast early and start to reap some card draw advantage. You can use a spell to create some token creatures, tap them to Convoke Bennie, and draw a card on your end step.  Later in the game, convoke can really help shave off extra commander tax; having convoke on your commander is surprisingly good.

Also, keep in mind cards like Angelic Accord that trigger at the same time that Bennie’s trigger would happen. 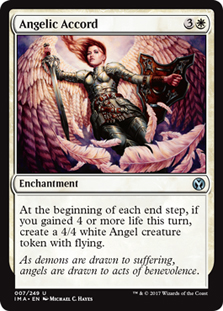 If you didn’t create any other token on the turn, the token creature from Angelic Accord is too late to satisfy Bennie’s trigger.

The important thing to realize with Bennie’s card draw ability is, even though it can only trigger once per turn, it triggers once each turn. So, if you can create a token some way during each player’s turn, you can potentially draw four extra cards per turn cycle, which is amazing for a white deck.  Let’s dig in!

Creature Tokens on Other Turns

To maximize card drawing, my first search was for ways to create creature tokens each turn, since token creatures can attack, block, and convoke Bennie. First Response is a contender, though it relies a lot on your opponents attacking you or causing some other life loss, since doing damage to yourself isn’t exactly in white’s wheelhouse. Brimaz, King of Oreskos is another one that relies on your opponents attacking to maximize the value. Sacred Mesa is more reliable but quite mana-intensive; still, I can’t imagine building a Bennie deck without it—making a 1/1 flier and drawing a card for two mana is a great rate!

Seance is a weird one that could potentially get you a card draw each upkeep, but it would require a weird mono-white self-mill deck to really pull it off.  Maybe you’re up for a challenge?

Other Tokens on Other Turns

I then went looking for cards that create other tokens for you on other people’s turns and format all-star and super-annoying Smothering Tithe immediately jumps out. Much to my chagrin, most players rarely pay the two-mana tax, so you’ll get a Treasure and draw a card during each opponent’s turn. Search the Premises is another way to get a token on another turn, but it requires your opponents to attack you.  Perhaps you can pepper in some monarch cards to help with that?

Digging a little deeper, we can find a lot of ways to make tokens on different turns when the conditions are right. Monologue Tax is a nice backup to Smothering Tithe, giving you a Treasure when an opponent casts their second spell each turn, and Bennie gives you a card.  Haunted Library is sure to yield some nice dividends if Aristocrats decks are popular with your playgroup. Monastery Mentor will trigger any time you cast an instant on your opponents’ turns.  Release to Memory is a potent graveyard hoser that can yield you a bunch of Spirit tokens and a card from Bennie at the end of the turn.

Creature Tokens on Your Turn

There are a ton of ways to simply make creature tokens on your own turn. Felidar Retreat can generate a Cat token when you put a land onto the battlefield. Geist-Honored Monk comes with two token Spirits, which will pay for three-fourths of Bennie’s convoke cost if need be!  Adeline, Resplendent Cathar and Leonin Warleader generate token creatures when you attack, and God-Eternal Oketra makes relatively huge 4/4 token creatures whenever you cast a creature spell.

Other Tokens on Your Turn

For other tokens on your turn, Tempting Contract and Goldvein Pick can give you Treasure tokens, Tamiyo’s Journal gives you Clue tokens, and Late to Dinner brings along a Food token. Bloodforged Battle-Axe will make a token copy of itself if the equipped creature deals combat damage to a player.

While plentiful, smaller token creatures make Bennie’s convoke ability better, the fact is that Bennie will only trigger once per turn regardless of the number of tokens you make, so why not focus on making one big token per turn? Making a huge monster from Ancient Stone Idol or Desolation Twin will feel even better when you draw a card too.

Since we’re going to be a token deck, might as well tap into some of the sweet support we have in white for the strategy.  Anointed Procession is fantastic here, even though it won’t get you an extra card from Bennie.  Divine Visitation transforms what might be small 1/1 token creatures into 4/4 flying Angel tokens with vigilance!  And Hour of Reckoning does great work in token decks, even if Bennie perishes in the bargain. At least he can go to the command zone for another casting.

Thinking about Bennie’s convoke ability, I wanted to look for cards that want you to tap your creatures, and the new Halo Fountain seems perfect, especially since you’re already saving mana on casting Bennie, so you should have mana available for activating the Fountain. It even makes token creatures too!

Order of Whiteclay and Patrol Signaler have that weird untap cost to their ability that might be worth adding to the mix, and Masako the Humorless makes it so that tapping your creatures isn’t a liability.

And then there’s that weird new card False Floor!  I’m not entirely sure if you’d want it in this deck, but it’s something to think about.

Oh wait, what about cards that care about all the mad card drawing you get with Bennie?  I can’t remember the last time I thought about adding Psychosis Crawler or Alhammarret’s Archive to a white deck, but here we are!  Reliquary Tower and Thought Vessel are must-runs when your grip is stocked full of cards.

Suit up your attackers with Sword of War and Peace, Empyrial Plate, and Hand of Vecna to turn those extra cards you’ve accumulated into an assault on opponents’ life totals.

Cards like Hall of  Heliod’s Generosity and Scroll Rack that might otherwise set your draws back a bit become better when you’re drawing extra cards.  And how about Approach of the Second Sun—seven cards from the top of your library go by much faster with steady extra card draw.

Instead of holding a bunch of cards in your hand, if you want to take the extra cards and make more immediate use of them, play ways to put extra lands onto the battlefield like Walking Atlas and Archaeomancer’s Map.  Also, if you shave mana off the mana cost, you can more often cast two or more spells in a turn with cards like Pearl Medallion and Oketra’s Monument.  Oh hey, Oketra’s Monument makes a token too—Bennie is pleased!

So, what do you think of Bennie Bracks, Zoologist?  Are there any cards I overlooked here that’d you put in your Bennie deck?