I’m constantly jealous of Constructed players. A “hater,” you might say. They get the top-level tournaments. The adoring fans clamor for their sideboard guides. A couple of them even brew their own decks. Heyo!

As a player who can remember the game before “netdecking” existed, brewing is an underrated part of Magic for me. You pore over the possibilities, the metagame, and bring a creation entirely your own to life. If there’s one thing I would challenge more Limited players to do, it’s brew.

“But Jake,” you ask through a screen to the void. “How can I brew a deck when I receive random packs?” 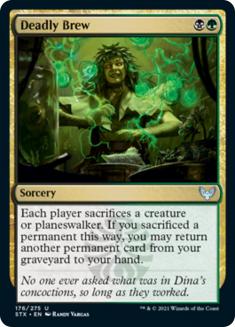 Great question, a rhetorical figment of my imagination. I’m glad you theoretically asked.

In Kamigawa: Neon Dynasty (NEO), I’ve had a chance to break down some of the unexpected archetypes that came out of the set. The concepts of five-color green or mono-red aren’t special, though. They occur naturally every few sets.

I want to take that a step further and look at how the infamous Slither Blade deck and others of its ilk came to be. These decks are born from someone taking a unique look at a few cards and creating an archetype.

Some concepts are a bust in any given set: a color pair, a mechanic, even down to a specific toughness. In Strixhaven: School of Mages (STX), Boros was considered nearly unplayable because the theme of messing with your graveyard was clunky. I was excited to pick up Llanowar Elves in my recent Dominaria drafts until the third time they died of Fungal Infestation. Apparently, the pointy part of an Elf shoe is a ripe place for athlete’s foot to fester.

While I can’t do much to save my Elves currently, those STX Boros cards like Reconstruct History and Returned Pastcaller wound up being solid additions to Jeskai or Mardu control shells. We didn’t care about the short-term tangential synergies with Fuming Effigy, but rather the implicit value of card advantage in a longer game. The Lorehold college, as structured by the design team, wasn’t for us, but there were some classes we could learn from. 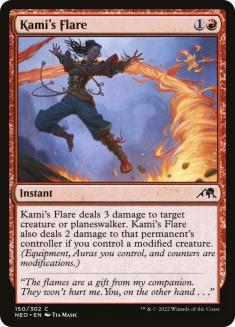 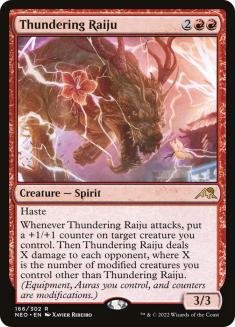 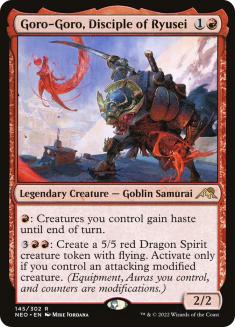 Looking at NEO, the mechanic of creature modification is on many cards, particularly in Gruul. Considering it has the second-worst win rate according to 17Lands, I wouldn’t call that a rousing success. The popularity of mono-red has been on the rise, and those decks put a premium on cards that mention modified—Kami’s Flare; Thundering Raiju; Goro-Goro, Disciple of Ryusei—without caring about the theme broadly. We don’t want to fight for them.

Green has four cards that mention modified, but two are mythic rares, so we’re not going to build around a wing and a prayer. Black has two in Lethal Exploit, which most people are happy to play for the -2/-2 alone, and Unforgiving One, which is probably best paired with red. White has none. Blue has a single card which feels like a complete outlier. Do you know what it is?

If we’re brewing, we need to know that the cards we want will be draftable a reasonable amount of the time. Anchor to Reality has the unique and cool effect of letting us tutor a Vehicle onto the battlefield. Still, according to my buddy Sierkovitz, a draft pod is expected to open 0.8 Anchors total. Even if a card is physically (or digitally) present in more packs, we need to ensure it’s not highly desirable. Bouncing and recasting Twisted Embrace four or five times is one of my favorite decks in NEO, but Twisted Embrace goes at Pick 3.45. People aren’t just forking them over like used doggy waste bags.

Guardians of Oboro is a throwaway for most drafters, going around Pick 12 on average, which makes perfect sense for two reasons. First, we’ve covered that modified isn’t something that works, let alone in blue. Second, the set features two other creatures with defender and a Saga that flips to become one. It’s a 1/3 that isn’t particularly daunting when given the ability to attack. They’re the Cheddar Bay Biscuits of NEO’s Red Lobster: sitting down at a table, you can have as many as you’d like. 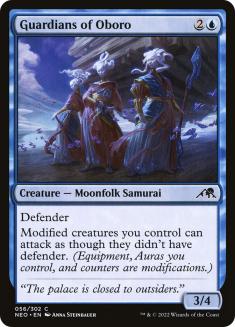 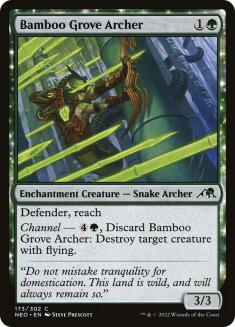 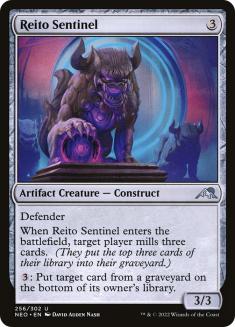 Considering we can wind up with three or more with relative ease in most draft pods, the key is finding other creatures with defender. Bamboo Grove Archer is a two-mana 3/3 that goes around Pick 8, while Reito Sentinel is a three-mana 3/3 that goes around Pick 11. If we can pick up some cheap ways to modify them, they represent substantial bodies for the mana cost, as those power and toughness stats for three mana are reserved for rares in NEO. It’s not difficult to wind up with seven of these pseudo-Walls plus some enablers to get them going brrrr.

As a corny person would say, “One man’s trash is another man’s Treasure tokens.” Without being able to pick up niche cards that only benefit us, this strategy wouldn’t exist because the deck would already be exposed. Instead, we live on the fringe out of necessity.

In this example, we need ways to get our creatures modified, but we can pursue unconventional routes. No one is fighting us for Coiling Stalkers, but they can sneak +1/+1 counters onto our already formidable bodies. Planar Incision is available late in the draft but can ambush an attacker, allowing one of our defenders to go on the offensive. 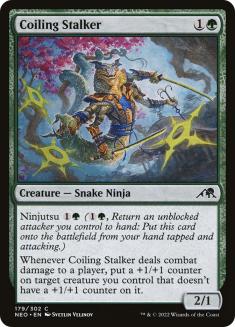 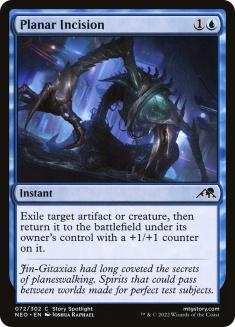 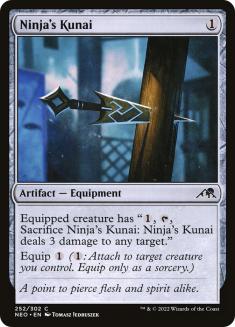 Ninja’s Kunai equips for next to nothing to get us going out of nowhere, while Acquisition Octopus gets a sizeable body to inhabit. Finally, Historian’s Wisdom makes your Guardians a formidable 5/5 on Turn 4 while usually netting you a card. It’s not a coup to draft any of these cards, yet they work well here.

But Is It Any Good?

Brewing is fundamentally not about winning and losing. I think there’s an expectation that if a deck doesn’t earn you a digital trophy, you’ve wasted your time. Failure should be considered your goal here. By approaching drafting from different angles, I guarantee you’ll become a better drafter, regardless of what your record shows. At some point, you can’t continue to grow by mimicking what better players do, so forging your path teaches you navigation skills on the fly.

Playing two different versions of Simic Defendified, I had a deck that was miles ahead of the other. It featured not one, not two, but three Kappa Tech-Wreckers; one of our only modified mythics in Kodama of the West Tree; two solid rares in Shigeki, Jukai Visionary and Spring-Leaf Avenger; and a pair of Skyturtles to get Shigeki back. With eight defender creatures, I hit my goal and exceeded it.

The second was a total letdown. My only rare? The Reality Chip, a card that is busted, but not so busted that it can carry 39 other cards. I was lighter on Bamboo Grove Archer, a card I identified as a key to making the deck function at a high level, but rich in Coiling Stalkers. No one is excited about being Stalker rich.

It took going 4-3 with the loaded deck to realize that traditionally powerful cards like Spring-Leaf Avenger weren’t helping me. The last thing I wanted to do was ninjutsu a creature I spent investing resources to modify, and my graveyard wasn’t rife with targets to get back. Shigeki was far too slow for a deck that needed to be curving out to take advantage of the above-rate power and toughness I was dumping out there. The “weaker” deck, meanwhile, was linear and focused on the task at hand with a bit of interaction beyond that.

Cards that looked weak became strong once I took my blinders off and embraced the brewing. To quote Chögyam Trungpa, “The bad news is you’re falling through the air, nothing to hang on to, no parachute. The good news is, there’s no ground.”