Pro Tour Born of the Gods is coming up, and Modern is soon to be tested extensively among those qualified. There are rumors that the banned list will change, and a lot of the public outcry is that Deathrite Shaman is too oppressive and constricts decks that are playing either green or black to include it because it’s simply too powerful of a card to not play. It’s also a card that hinders the playability of graveyard strategies. Living End and Dredge variants haven’t been seen as much because of Deathrite Shaman’s existence, and I wouldn’t be surprised and or upset to see it get the axe and Wild Nacatl be freed from lockdown.

Last time I talked about some new combo-oriented creature strategies for Modern that I had brewing up in my head. This time around I’ll be focusing on two tried-and-true aggressive creature decks that I like to play: Zoo and Infect.

This deck follows the Gaea’s Might Get There strategy that Raphael Levy employed to back-to-back wins at Grand Prix years ago. Back then they had Boros Swiftblade to go along with their +5/+5 Gaea’s Might to end games quickly. Viashino Slaughtermaster has the same effect with a more lenient casting cost while providing a self-pumping effect that makes blocking difficult for them and offers a mana sink for the deck. Without inherent card advantage, you need uses for excess mana in the cases where you get flooded.

The eight 2/3s for one mana in Loam Lion and Kird Ape get the game started, and the plan is to finish it off with Tribal Flames or Might of Alara or with the twos of Grim Lavamancer and Deathrite Shaman adding up. The twelve burn spells ensure that the reach is there if your opponent deals with your creatures. The Path to Exiles are a nod to Splinter Twin and creatures that are hard to deal with.

The mana base is the tricky part, and using your fetch lands appropriately is key. The singleton Mountain is there mainly for opposing Path to Exiles but also because it’s the main color that you want multiples of in the later turns of the game when you want to fire off burns spells alongside Grim Lavamancer activations. Some of it is pretty obvious, like getting a Temple Garden to complement a Loam Lion, but make sure that the fetch lands that you don’t use can get what you expect to need in the future. The Breeding Pool is the only Island in your deck to fully power Tribal Flames and Might of Alara, so it should be gotten last and should not be left open to Tectonic Edge unnecessarily.

The sideboard is geared toward beating Affinity, with the full set of Ancient Grudges and two copies of Kataki, War’s Wage. Kataki comes against anything with artifacts really, including Tron and Birthing Pod decks. Path to Exile is for decks with creatures that aren’t particularly vulnerable to burn and for Splinter Twin. The Lingering Souls come in against grindy decks featuring Liliana of the Veil and Thoughtseize to have game for their one-for-ones.

Lastly, Snapcaster Mage and Dark Confidant are considerations for the deck that would require a revision of the mana base to include. It’s entirely possible that a good five-color aggressive creature deck involves either or both, but here and now the focus is on having a consistent two-power creature to attack with on turn 2. Ethersworn Canonist and Thalia, Guardian of Thraben are concessions to Storm decks, and the Grafdigger’s Cage is to fight Birthing Pod from another angle. Nihil Spellbomb is for the errant graveyard decks that currently exist.

If I were qualified for Pro Tour Born of the Gods, this is would be the archetype I would play if Wild Nacatl were legal. Switching Deathrite Shaman for it would be pretty smooth but would probably be a tad too one-dimensional on 3/3s and 2/3s for one. Knight of the Reliquary would likely make its way back into the deck considering that Deathrite Shaman is no longer eating away at graveyards.

This is a favorite of mine, so much so that I’ve been experimenting with it in Legacy. Any deck with “free wins” has my approval, and although I tend to shy away from strategies that are too all in in concept, Infect is still capable of winning on turn 2. In fact, Infect is capable of a turn 3 win on a mulligan to 1!

The main attraction to Infect is that Deathrite Shaman’s life-gain ability and Birthing Pod’s infinite life-gain combo are irrelevant against poison. If Soul Sisters (possibly with Norin the Wary) becomes real, it would be a dream metagame. Here’s what I’ve been playing lately:

The biggest change is that we have Wild Defiance in the maindeck. This solves a number of problems, the main of which is Spellskite. Infect and Auras are known for their weakness to Spellskite, especially from the splash damage caused by Splinter Twin players including it in their maindeck to protect their own combo. Here it provides a trigger that can push your pump spells through the 0/4 regardless of their ability to redirect the actual spell. Wild Defiance also allows the deck to deal lethal normal damage from time to time with Noble Hierarch. It’s also natural protection against Lightning Bolt and the much more annoying Electrolyze, which is likely the best card in the format against you.

Because of Wild Defiance, the deck can afford to cut some of its pump spells and play the full set of Apostle’s Blessings. Much of the time you don’t need to go for anything into open mana and can be comfortable chipping away at them for one or possibly two with the exalted triggers of Noble Hierarch and Cathedral of War or with the lone Pendelhaven. The last great benefit of Wild Defiance is Twisted Image. Twisted Image is a card that you have to sideboard in in the dark against every matchup given the existence of Spellskite. It’s great that it’s a spell that isn’t quite as reactive as something like Nature’s Claim in the fact that it can cycle and that it triggers Wild Defiance. I even get in a relevant extra point with Pendelhaven’s toughness boost switching around every now and then.

Dispel is mainly for U/W/R Control decks with Cryptic Command and Electrolyze. It used to be one of the more unfavorable matchups for Infect but thankfully it’s fallen out of favor. Once again Wild Defiance pushes the matchup further in the positive direction. Carrion Call is a card that comes in for this matchup too. Four mana for a spell is usually a lot for a deck with twenty lands, but not when they’re casting Path to Exile. Carrion Call provides a use for the extra Forests that you end up with and is used as a means to initiate conflict in the staring contests that develop between them playing around you killing them with burst damage, forcing the action on their turn before you untap since Carrion Call is an instant.

I’ve been trying out Necropede and liking it. The deck already wanted one more infect creature since the previous configurations leaned a little too heavily on the pump-spell side of things. The most common way to lose is for them to deal with all of your creatures and to be stuck with a glut of useless pump spells. The second Necropede comes in from the sideboard against decks where you want to be doing some blocking and against decks with Dark Confidant, ensuring that you have a creature that won’t die without you getting a sweet taste of value.

Currently this is the deck I’m most familiar with in Modern, and it’s what I’ve been playing in the Invitationals Qualifiers at the Baton Rouge shops I frequent (Rocket’s Hideout and Gamer’s Paradise). Modern was a big portion of their events, and I was happy with how Infect performed in both. The deck isn’t reliant on graveyards at all, so cards like Relic of Progenitus are asymmetrical in overall effect and you don’t have to lean on fetch lands so much. A version of the deck without fetch lands and with either Yavimaya Coast or Hinterland Harbor in their place could possibly be correct.

In addition to my belief that Wild Nacatl should be unbanned, I think that Ancestral Vision and Bitterblossom should be given a chance again in Modern. Ancestral Vision is less of a threat now that the cascade potential of Bloodbraid Elf is no longer there. Bitterblossom was a main component of Faeries once upon a time, but I think that Modern has developed so much that the existing decks are strong enough to beat the two-mana enchantment that makes 1/1s.

Plus it would give Ari Lax’s Faerie Rogue token room to shine. 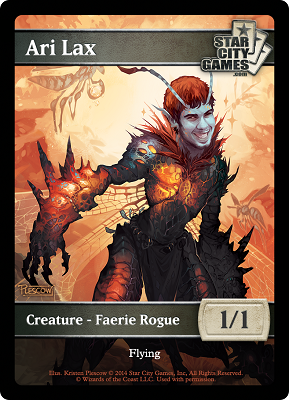