I like playing creature decks, specifically ones with sweet synergies that sometimes are super apparent. My local shops are having their own invitational tournaments, and Modern is a part of both of their multi-format structures. Earlier it was said that Modern would be the PTQ season coming up, but it was changed to Standard. In anticipation of the "Modern season," the local shops made Modern a big part of their tournaments, so that’s what I’ve been focusing on lately. Today I’d like to introduce a couple combo-oriented creature decks that I’ve been working on.

Sliver decks have always been a favorite of mine. I used to play CounterSlivers back when it was a thing, which was one of the first ever aggro-control decks that attacked the metagame by continuously applying pressure with the backup of Counterspell and Force of Will. I liked it enough to play it at my first real big event: Pro Tour New Orleans 2001.

When Time Spiral released a new brood of Slivers, I was excited to try them in the Block Constructed format at the time and had good success with them. Now that M14 has provided us with even more options, I’d like to introduce the current Modern take on the old-school idea.

You’ll notice the lack of Mutavault and Sinew Sliver almost immediately. This deck has pristine mana and functions well without either. Combo Slivers is a take on a Time Spiral Block Constructed deck that had game, going all in on poisoning the opponent out with Virulent Sliver and Summoning Pact to get more copies. It just so happens that the gold Slivers within red, green, and blue offer a hidden combo element.

Originally the Block deck had shaky (at best) mana that leaned on Gemstone Mine and Grove of the Burnwillows to glue it together. Now with fetch lands and Cavern of Souls, the deck can cast whatever it needs on time. Another flaw with the Block version was the lack of good one-drop Slivers, forcing the deck to play Screeching Sliver or to also play white for Sidewinder Sliver. Galerider Sliver is exactly what this deck needed since offering evasion is miles better than attempting to mill the opponent out (although that did happen from time to time). Striking Sliver is mainly another on-color one-drop with a semi-relevant ability. Predatory Sliver allows you to pressure their life total early, and it’s easy to see why it’s included.

Cards that got replaced:

Screeching Sliver – No longer needed due to having better one-drops.

Telekinetic Sliver – Because your creatures are better at dealing lethal regular damage now, you don’t need the additional angle of soft locking them with an Opposition effect.

First let’s looks at an example of a typical turn 3 win line:

This is obviously a line you would take if you know the coast is clear since the Summoner’s Pact will kill you if things go wrong. The multiple Virulent Sliver draw is one of the strongest available and offers to shut out the game on turn 4, if not on turn 3. Luckily the deck functions on multiple axes and doesn’t need to get lucky all the time in that fashion in order to win. Let’s look at the combo pieces of the deck. 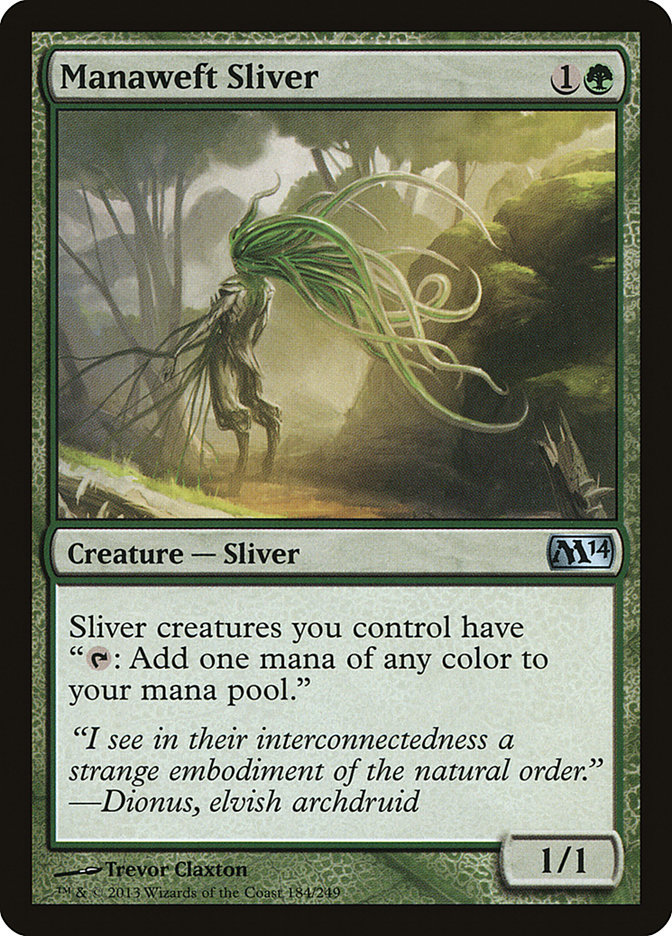 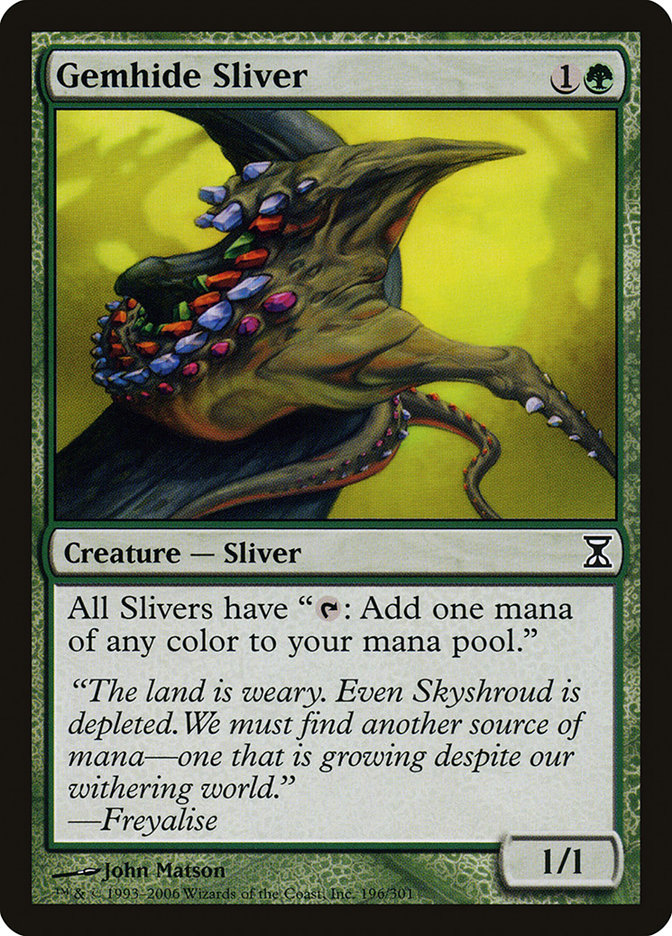 This is both a mana fixer and combo piece and good enough to warrant the full eight copies. Often you’ll play a Sliver on turn 1 and then cast one of these mana producers to tap the first Sliver for another one-drop Sliver on turn 2. Your fetch lands can get basic lands in most cases, preserving your life total, which may not be necessary but is always a good thing. 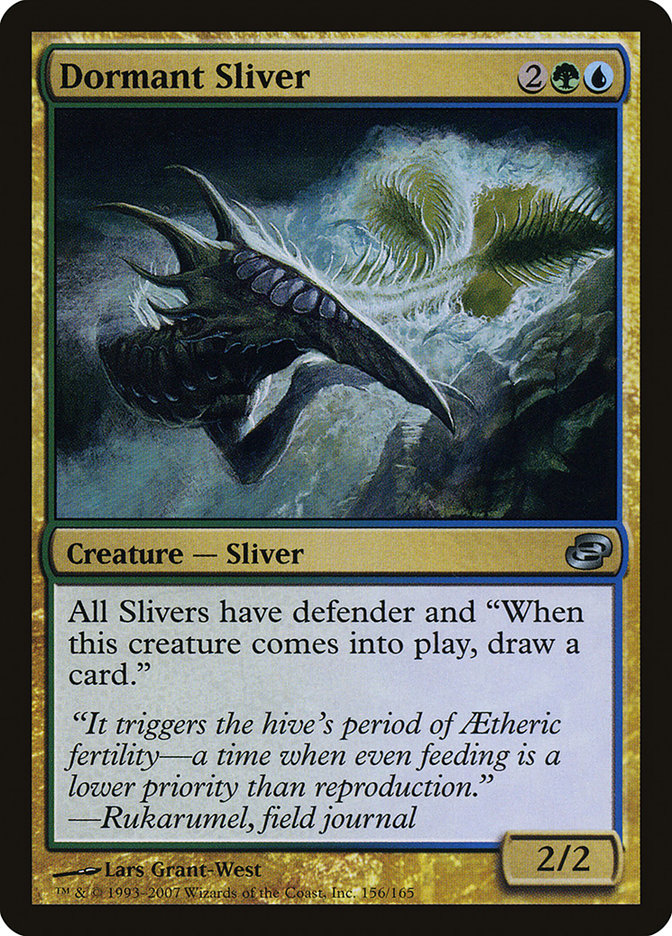 My vote for most underrated Sliver of all time. Its effect is completely busted, and its drawback is nearly non-existent in a deck with sacrifice effects. It provides a static effect similar to Glimpse of Nature that gets bonkers in multiples. Drawing half of your deck as early as turn 4 actually happens. If you have a draw with Dormant Sliver but have some one-drop Slivers that won’t have much impact if you cast them early, it’s perfectly fine to wait until you have a Dormant Sliver in play first to net the card by casting your one-drop Sliver afterward. 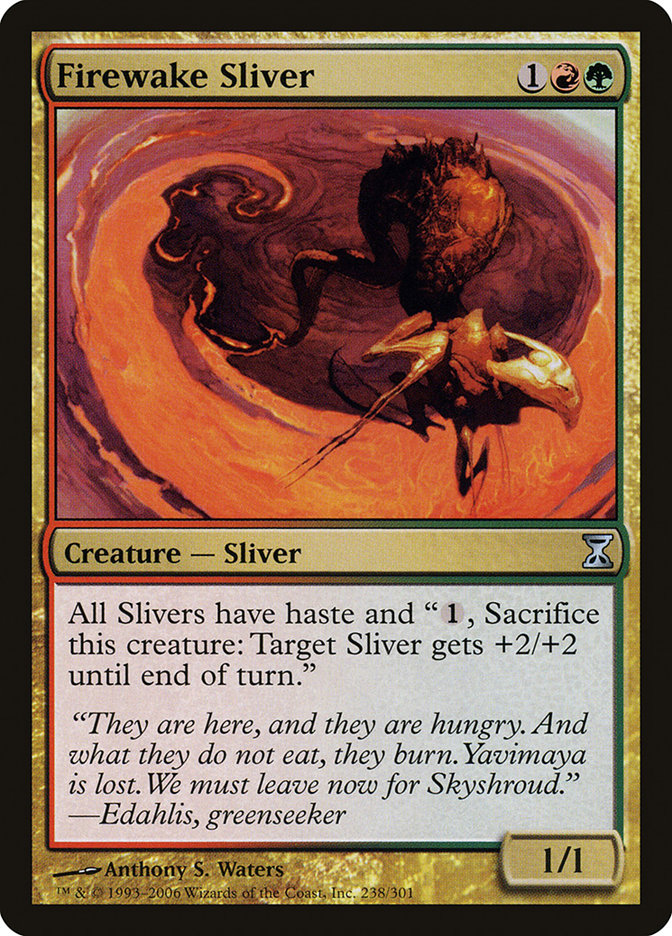 All around better than Blurred Sliver, this is another sacrifice outlet for Dormant Sliver. It allows you to cast creatures and tap them for mana from Gemhide or Manaweft Sliver, enabling you to go off and cast a ton of Slivers in one turn. It also further screws up combat for your opponent by allowing you to give a choice creature +2/+2 mid-combat. 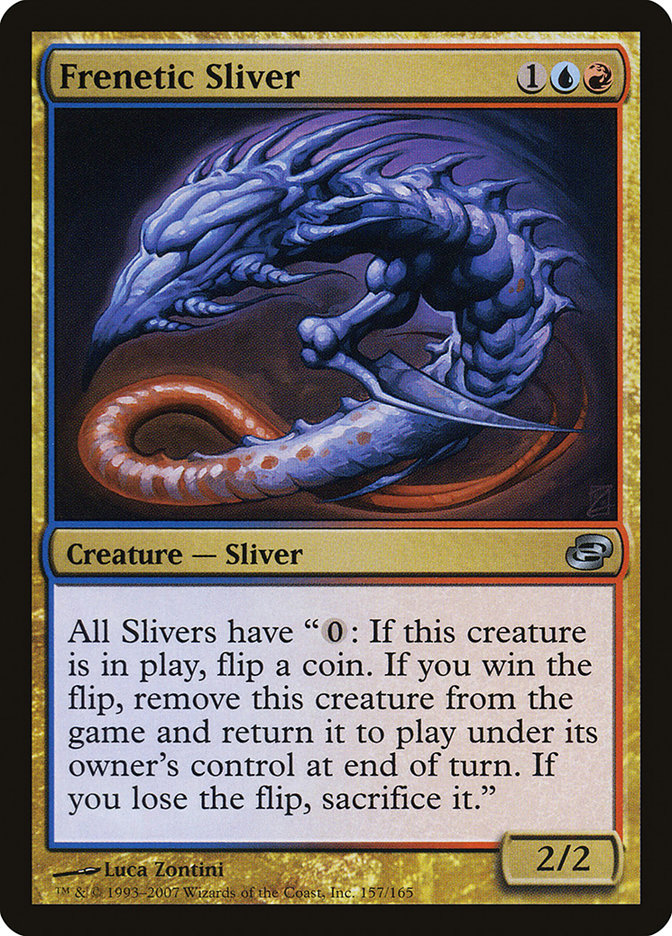 Causes fits for anyone casting a removal spell. It’s unpredictable if your creature is going to be truly removed or not and functions similar to a free Aetherling exile effect. Potent against sweepers and targeted removal alike. Also serves a key role in removing Dormant Sliver to enable the lethal attack. 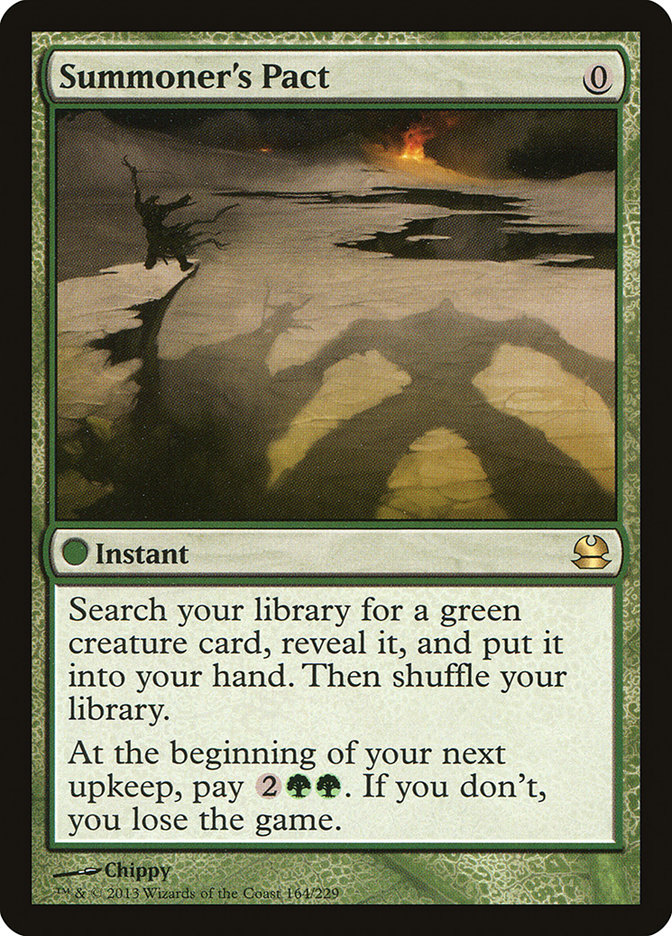 With the exception of Striking Sliver, Galerider Sliver, and Frenetic Sliver, your deck is full of green creatures to tutor up. This is usually a card you cast on turn 4 when you can pay the upkeep cost with certainty or when you have two or more mana-producing Slivers giving you breathing room if they remove one of them. Sadly Green Sun’s Zenith is banned or that would also be a consideration, although I’m pretty sure that paying mana next turn is better than paying now in the cases that you get a Firewake or Dormant Sliver. Chord of Calling is a similar card that I feel is just worse than Summoner’s Pact for what we’re trying to do.

So there you have it. A deck capable of turn 3 wins, running over blockers with Predatory Sliver, evading blockers with Galerider Sliver, resiliency against sweepers and targeted removal with Frenetic Sliver, ignoring countermagic with Cavern of Souls, and playing the attrition game with Dormant Sliver. It’s a deceptively powerful deck that shouldn’t be underestimated because it’s wrapped into a cutesy theme-deck package.

Before playing in the most recent StarCityGames.com Invitational in Las Vegas, my first and only Invitational appearance was the very first one in Richmond. I played Mono-Black Vampires in the tournament and was ultimately defeated by eventual winner Gerry Thompson while playing for Top 8. The most common Vampires flavor at the time was to go with a splash of red for good removal in the form of Lightning Bolt and Arc Trail. I personally favored sticking to mono-black for the consistency at the cost of having to use weaker removal spells like Disfigure and "reach" in the form of Sign in Blood. Here’s that decklist:

Now that we have access to more cards, staying in a single color is much less of a decision now. Thoughtseize and Inquisition of Kozilek are great ways to interact, and Liliana of the Veil may be the best card in Modern.

Mutavault is a nice Vampire tacked on a land, giving the deck resilience against sweepers and that extra punch when you need it late so you don’t need something like Lavaclaw Reaches anymore. Urborg, Tomb of Yawgmoth ties it all together, allowing you to tap Mutavault and those fetch lands for black mana so you can save them to crack when you need to and avoid the common annoyance of not being able to cast Sign in Blood or Gatekeeper of Malakir on time (much like the issue with Nightveil Specter / Boros Reckoner and Mutavault in Standard).

I originally started with aggressive Vampires like Vampire Lacerator and Pulse Tracker, but I quickly discovered that they aren’t good enough for Modern and are pretty embarrassing compared to the aggressive creatures of other decks like Affinity. Viscera Seer constantly overperformed, and all I really wanted to do on turn 1 was strip them of a card and see their hand, so that’s the direction the one-drops moved in.

Bloodghast has always given control decks fits and has never had a better home than it has here. The interaction between the fetch lands and Viscera Seer leads to tons of seemingly free scrys that allow you to sift through your deck to find the pieces you need at the time. Liliana of the Veil going +1 to discard a Bloodghast is a common play as well that feels pretty dirty. Another sweet play is to cast Sign in Blood targeting yourself on the draw to go up to eight cards to pitch Bloodghast. With fetch lands, shock lands, and incremental damage, Bloodghast gains haste surprisingly often too. 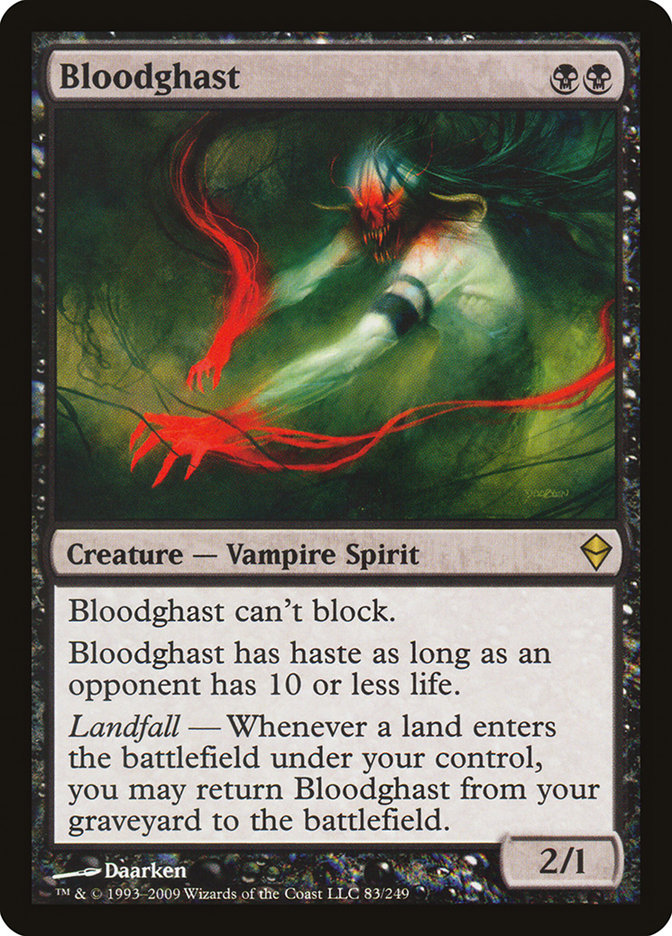 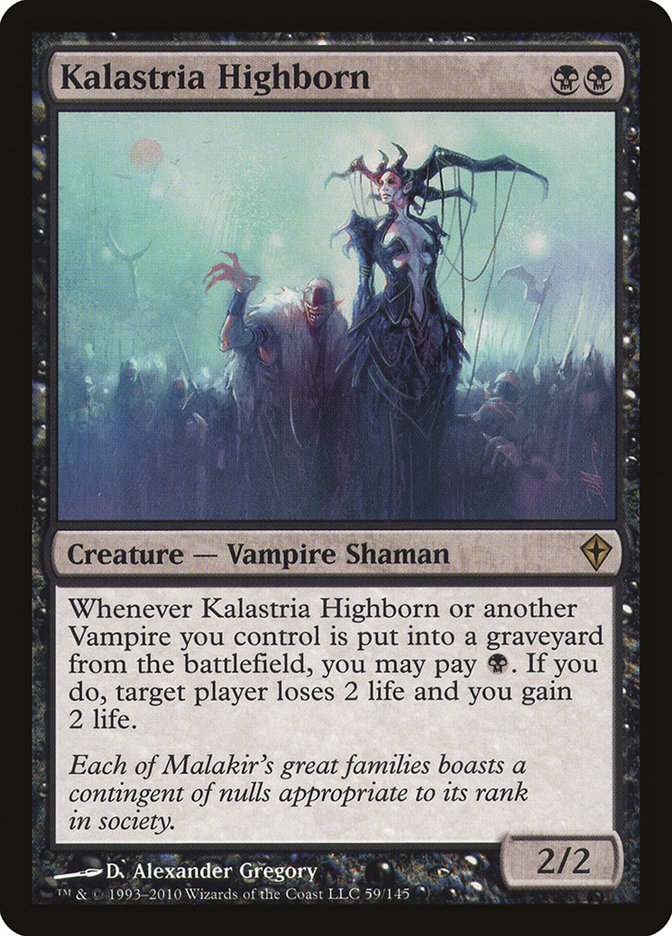 Kalastria Highborn has been doing work as usual and combos with the Bloodghast, Viscera Seer, fetch lands engine to either close the gap in the race or close out the game entirely.

Gatekeeper of Malakir has been showing up in Legacy and Modern alongside Phyrexian Obliterator in devotion shells. Here alongside Liliana of the Veil you have eight sacrifice effects, lessening the need for targeted removal like Victim of Night. We have with just one Victim and one Urge to Feed for those slots.

Vampire Nocturnus has always been a swingy card. A lord this unpredictable is a really interesting card to have in a deck. Thankfully we can do a lot to control the top of our deck. Viscera Seer scrys, and being about to reset the top of your deck with fetch lands and Sign in Blood enables a high likelihood that your Vampire Nocturnus will be active when you need it most.

This deck plays a lot like The Rock, able to fight off most opposing threats without having glaring weaknesses. It doesn’t tend to beat down quickly early, but what it does have are haymaker finishes with huge Vampire Nocturnus enabled attacks or by "going off" with Kalastria Highborn.

If you’re looking for something different in Modern, I like these two approaches. They may seem gimmicky, but I’ve been happy with my results thus far. Are there any cards that you think I’m missing?