For more information on the deck and its genesis, I recommend checking out this and this.

I liked the idea of Loxodon Smiter as a way to lower the mana curve, fight opposing control and midrange decks on a different axis, and brickwall aggro decks. Over the course of the day, I continued to be impressed by the effect Loxodon Smiter had in my matchups, especially if I had a turn 1 mana dork. That fact alone nearly led me to playing a ninth, but the amount of turn 1 green sources was too low.

As I said earlier, Unflinching Courage is what got me truly excited about the deck since it allowed me to have a sideboard card against several matchups, therefore saving sideboard slots. Those slots went to Liliana of the Veil to fight control, Hexproof, and some . . . unlikelier matchups.

Disciple of Bolas provided the deck with a secondary engine, especially when coupled with the high power Loxodon Smiter and blink effect of Restoration Angel. In any slower matchup, I wanted a second copy in order to draw it sooner, but it was nice to never have it clogging my hand early. Still, I should probably have a second somewhere in the 75, or at the very least maindeck Garruk Relentless to tutor for it. 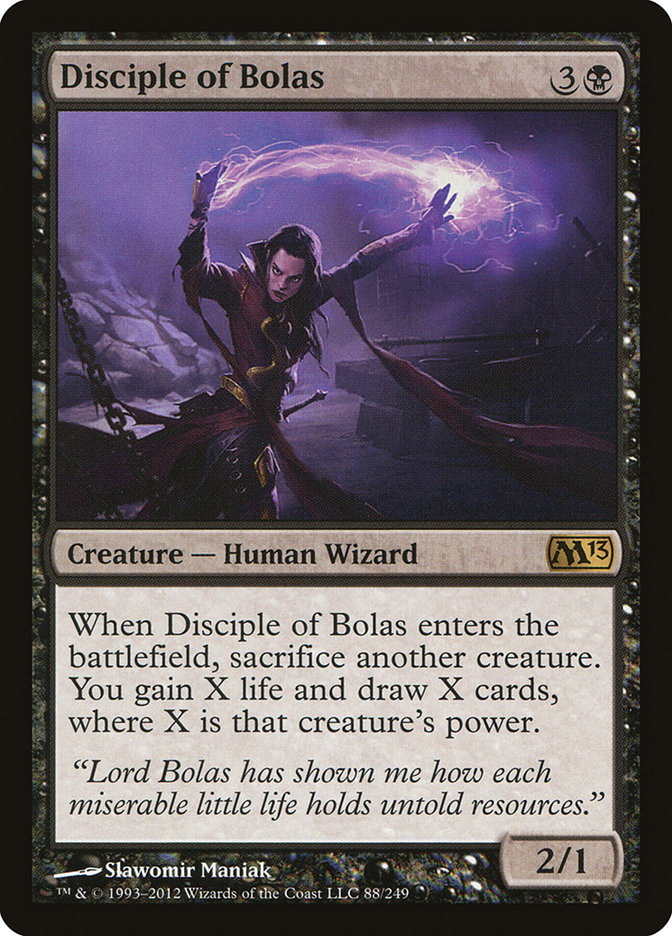 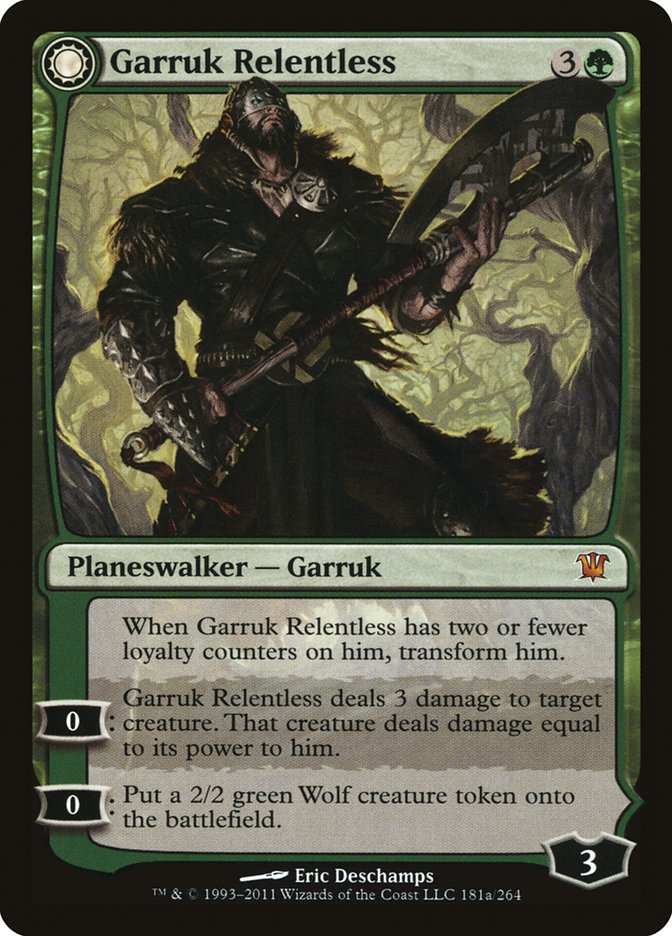 Initially, I had Garruk Relentless maindeck as a way to fight Arbor Elf mirrors, Blood Artist, and Olivia Voldaren. That allowed me to shave Angel of Serenity down to one, but that decreased my Grisly Salvage nut draw potential. On top of that, Garruk actually underperformed against Jund and its capability of going over the top.

Going in, I knew all flavors of The Aristocrats were going to be tough matchups. Unfortunately, Unflinching Courage isn’t great against them, even if they sideboard out every removal spell. To beat them, a combination of Ratchet Bomb, Profit // Loss, Curse of Death’s Hold, and / or Blood Baron of Vizkopa is necessary. That seemed like a lot of effort to beat a deck I may not necessarily play against.

The Jund matchup was something I was concerned with, but after some games against Todd Anderson the night before, I was very confident. With both my G/R and Jund matchups looking good, I was beyond ecstatic to play the next day. Although I didn’t have it as bad as Todd Anderson, who played against Hexproof variants in the first two rounds (though he defeated both), I had a rough go of it.

In the first round, I played against Richard "Panda" Nguyen, who had made Top 8 of the last five Opens he’d played in. Despite being his personal good luck charm, I beat him after he stumbled on lands two games in a row. I couldn’t exactly feel bad for winning, as I saved him from getting a deck registration error. Since I saw his list, I knew he had access to three Doom Blades (and used his removal sparingly in our first game), so I couldn’t bring in the Unflinching Courages.

Second round I played against Level 2 Judge and StarCityGames.com employee Bruce Mills. Both games played out roughly the same way in that he had five land and all spells for a long time while I had an early advantage but eventually flooded out. My inexperience with the matchup and my deck in general caused me to play slower than normal, but we likely wouldn’t have had a third game regardless.

In round 3, I was very excited because I was able to deck U/W in game 1. We traded threats while he dug for Aetherling, eventually finding it after I had Vaulted and Discipled up to 40 life. After a Putrefy, he couldn’t kill me. In the second game, Obzedat appeared through the Cavern of Souls, and that was enough.

He used two Disciple activations in game 1, while I played it cautiously with one. However, his extra avalanche of cards forced me to pull the trigger on yet another Disciple activation in order to remain at board parity. That put me far enough ahead that if I found an Angel of Serenity it would likely seal the deal, so I cast two Mulches. Sadly, I bricked on them both and was definitely going to lose to decking. With my last Unburial Rites and last Angel of Serenity on the bottom of my deck, I could no longer win.

I was kicking myself for cutting the Garruks the night before, as those would have made that type of game an easy victory. As it was, neither of us was set up to beat the other person, so I settled in for another grind fest. To break that parity, I also sideboarded in Liliana of the Veil. He wouldn’t be able to attack it, and eventually I could use it to give him the choice of Plague Wind vs. Armageddon you.

By the time I found a Liliana, we were in turns, and he was still at 60, so I conceded.

I played for a few more rounds but eventually dropped after being handed my third loss by another Aristocrats deck. Even after taking a few sound beatings, I liked the deck. There were some things that could have been better, such as more turn 1 green sources, but my plans were solid. If I continue to play against Aristocrats an average of two times per tournament, I’m going to need a better plan against them.

Of course, I would have loved to be in Todd Anderson shoes, 4-0 and knowing I’d be playing against Jund twice in a row, but he lost each time. I consider Todd to be a very capable Magician, so that was surprising considering how lopsided the matchup seemed the night before, but that’s Magic.

The deck was played by Joshua Cho, Chris Andersen, Todd Anderson (after a late night swap), and myself. None of us made Top 8, but these tournaments are very difficult now. At 550 people, a record of 8-1 is not good enough to be able to draw into Top 8 (as Brian Braun-Duin found out the hard way), so you have to win 90% of your matches in order to reach your checkpoint.

As anyone can tell you, winning 90% of the time is very, very difficult, and I’m not sure which deck gives me the best chance of doing that. Some would argue Jund, but I feel like my chances are much higher playing a deck with some 65% matchups and some 35% matchups as opposed to a deck that has all 55% matchups.

The Aristocrats is one of the few non-Flash decks I’ve had positive experiences with. Other versions—including maindeck Obzedat, Ghost Council—also look pretty nice. I feel like that sideboard is just a mishmash of low-impact cards, so that’s the first thing I’d try to rectify. In particular, Slayer of the Wicked might help kill Jund’s creatures, and Underworld Connections would allow you to keep up with their removal.

Gather the Townsfolk over Lingering Souls still irks me a bit, especially considering how bad Gather the Townsfolk was for me at SCG Standard Open: Richmond. When I played The Aristocrats at SCG Standard Open: Columbus, my Falkenrath Aristocrats frequently needed food to munch on, so maybe Gather over Lingering Souls helps. Lowering your curve would allow you to have multiple things in play, plus people don’t want to kill your 1/1 Human tokens. 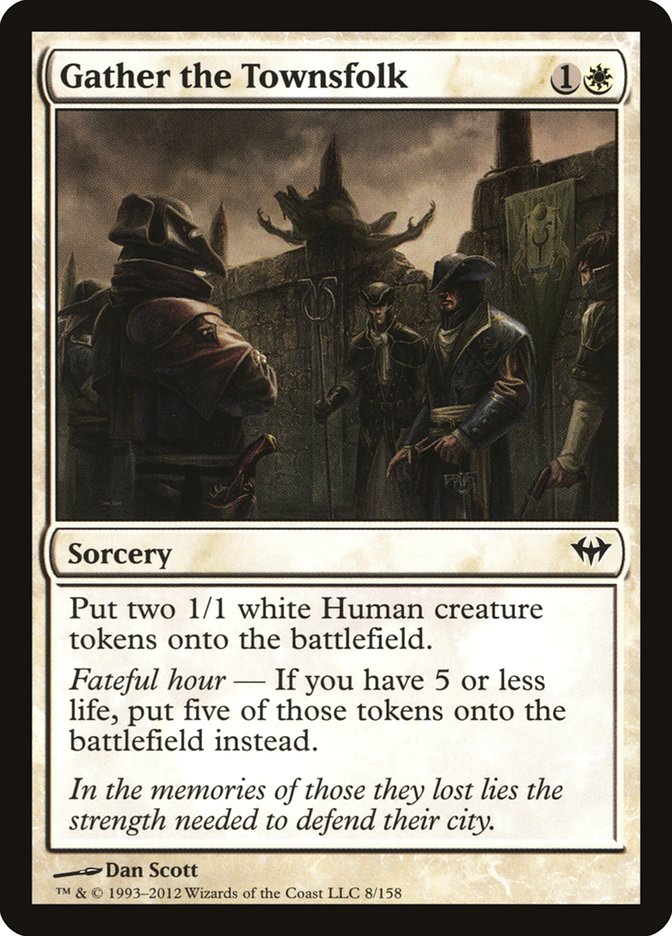 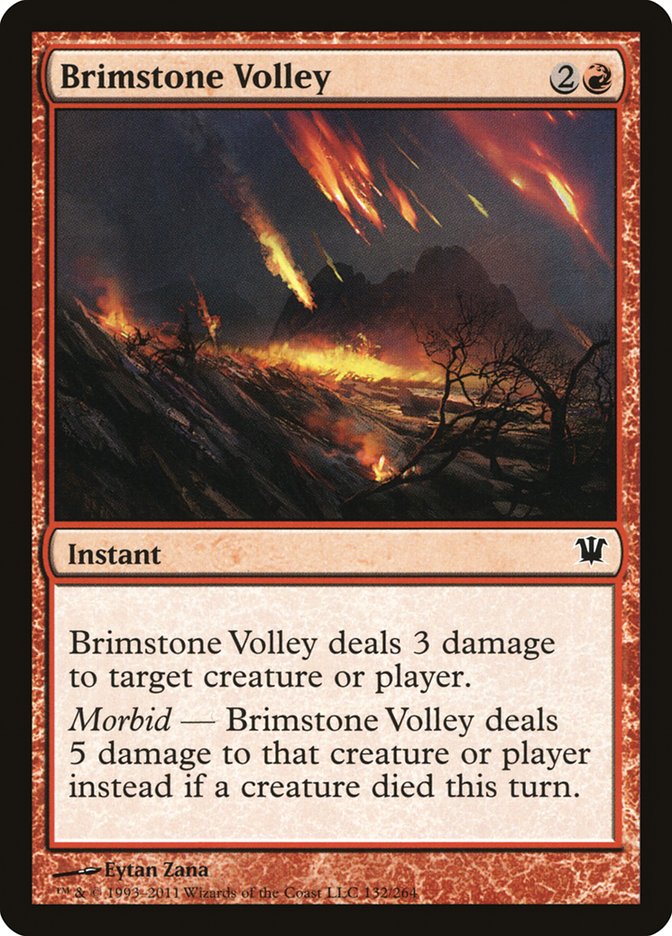 Brimstone Volley is another nice addition, though I probably wouldn’t play it as a four-of. Soku has been playing a pair of Zealous Conscripts instead of a Gather and a Volley, so I feel like I’m on the right track.

The last thing that impressed me is the use of Mutavault. The Aristocrats has no protection against flooding, so having some manlands would be much appreciated. It can make your turns awkward when you want to cast some very colorful spells, but I think it’s worth it in the long run.

I think I’m still leaning toward Junk Reanimator, as it seems more powerful than The Aristocrats. There are some brews out there though . . .

The Tragic Slips look fine to me, and the Rootborn Defenses are certainly nice. In fact, I wouldn’t mind seeing a couple of those maindeck.

Anyway, this is obviously Yuuta Takahashi’s deck from Grand Prix Kitakyushu. I wish I could tell if this deck is good or not, but even from playing matches with it, I have no idea. Some games you annihilate them, sometimes all your guys die, and sometimes you’re on the draw and all your countermagic stinks.

Even Brad says to stay away, but I dunno. From knowing some of Brad’s online aliases, "Bigaton" seems within his range.

This deck is super wild. I was considering playing some Elderscale Wurms in my sideboard until I realized Unflinching Courage is very good on a Loxodon Smiter.

Masashiro Kuroda, while semi-retired, is still a master, and I would expect nothing less than a masterpiece. He didn’t fail to deliver.

As for Legacy, I played my trusty Shardless BUG deck (with very few changes) and faced a diverse field of two Burn and two mirrors, losing to one of each. At that point, I dropped and went home. Perhaps I should add Chill back in my sideboard and teach those guys a lesson.

Honestly, though, I might just dip back into the Bucket List. If I travel to the StarCityGames.com Open Series in Cincinnati this weekend, you may see me with some giant monsters in play . . .