Sometimes you just want to take the random card button for a spin over at Gatherer. From the twenty years of Magic’s history, what piece of forgotten
cardboard will appear on screen? What hidden gem will arrive to gain a new day in the sun?

The goal is simple. Hit the random button, and then keep on hitting it until I’ve arrived at a legendary creature. Then I must build a deck around that
creature. Are you ready?

Five cards slide by, then a few more, and I see a legendary creature. Uh oh.

I just did an EDH deck around them a couple of months ago as part of my Impossible Commander series. You can check it out here.

1a). Any legendary creature I flip which I’ve already built a deck around recently can be set aside for another creature. We’ll just keep on going!

So with that new caveat, onward!

Cards roll by like haystacks on a fall road. I don’t even keep track. Then another legendary creature arrives. Borborgymos Enraged. Blast it! I have that deck too! 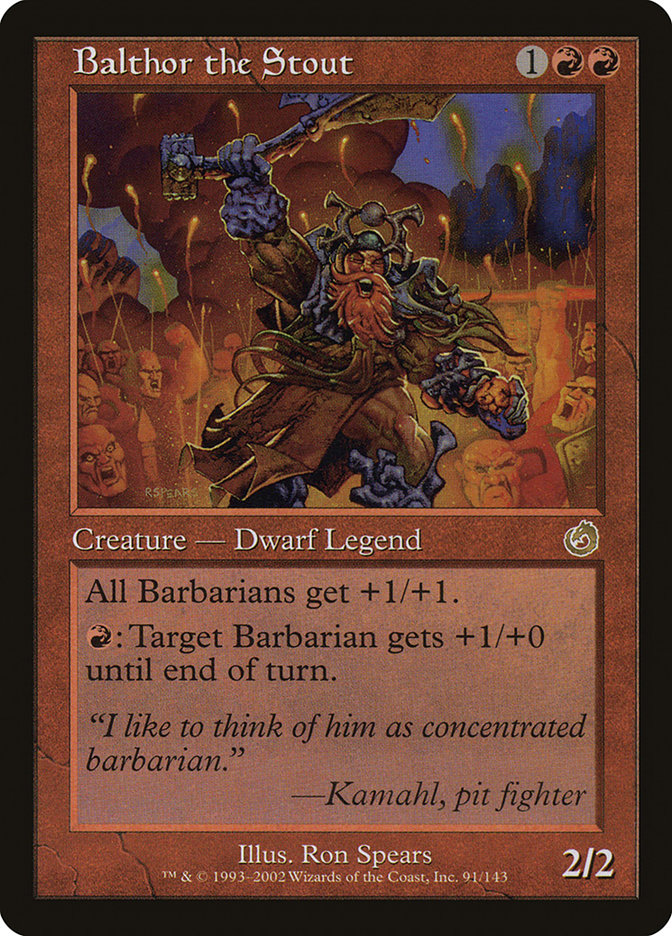 In the great tradition of Conan and Fafhrd, barbarians in fantasy tend to be great fighting individuals. It’s individual grit and determination that wins
the day. In that vein, let’s look at the great legendary personalities of the wastes.

Okay, random here we go and…….

One of the problems with building an EDH deck around a tribal Commander who has a weak number of entrants is what to do with the rest of the deck. Too many
barbarian entries are either weak (Barbarian Outcast) or ability-free vanilla entries, such as Balduvian Barbarians. What do you do with the rest of the
deck? How far are you willing to push the theme?

So I decided to give the deck the feel of the wastelands they live in. Whether desert or icy wastes, barbarians come from the far-flung areas on the
outskirts of civilization. They have hewn their lives against the harsh land and harsher monsters.

Who do we have facing the great wastes? Balthor obviously brings in Kamahl and Jeska since both were raised in the same family. After this trinity, who is
next? Living in the Ice Age era of Dominaria, Lovisa Coldeyes is suitably helpful to barbarians. People like Godo will also jump in to assist. We also have
Godo’s Maul,Tenza. I added some non-barbarians who I felt fit the oeuvre. In went Lu Bu, Master-at-Arms and Marton Stromgald. They are joined by Eron the
Relentless, Kazuul, Yuan Shao, and Ma Chao. All of these feel suitably out in the wilderness to me.

These individuals also give this deck a different but familiar vibe to my last Random Commander entry. I had Lady Caleria, and I built a fun flavorful deck
around an adventuring party of females that went around and smote wrong – it was oozing flavor. This time, we have individual heroes in the wastes,
fighting against the harsh elements and the nasty monsters that stalk there.

And these individuals are aided by some other barbarians – Barbarian General, Pardic Arsonist, Balduvian Warlord, and the like. Taurean Mauler and
Changeling Berserker will do their best barbarian impression while Adaptive Automaton and Obelisk of Urd provide some pump-age to your barbarians.

I began with the snow-based landscape that would be similar to Conan’s Cimmeria. Let’s play Snow-Covered Mountains! In head cards like Icefall and Snow
Fortress. They might not be the best of the best, but they have a lot of flavor. Skred will kill something suitably well while Glacial Crevasses will
provide a land-for-Fog-trade which is odd but useful in red. Icy Manipulator is a lot of fun, and we have the Sword of Fire and Ice to wield. Watch out for
that Ice Floe!

We also have some allies from the north, like Frostwielder, as well as some enemies to fight, such as Stalking Yeti and Karplusan Yeti.

And then we have the general wastes. Check out Wasteland, Desert, Dust Bowl, and Encroaching Wastes as representations of just how bad the area is. Want to
survive out here? Well, you’re going to have to avoid Earthquakes and their Aftershocks. Fissures and Fissure Vents Crack the Earth all around. Of course,
these cards all give the deck a healthy amount of removal of all sorts that suit whatever is going on but do so in a fun, lower-powered way.

We have some harsh weather too! Comet Storms and Starstorms rain particulate all over the area. In fact, some scholars have argued that the land would
allow irrigation and the healthy growing of crops if not for the huge showers of skystuff that litter the area.

As a result, the few buildings in the region are old ruins of long lost civilizations that are trapped and laden with creatures. You’ll find a Jade Statue
guarding a treasure or a Guardian Idol that is overly jealous of its sacred altar. You have to avoid traps like Pit Traps, Leonin Bladetraps, and Ricochet
Traps.

After you do, you can often find sacred relics. In fact, the entire area is rumored to have a long lost set of artifacts called the Regalia of Might, the
symbols of power of a long dead empire. Rumor has it that if these artifacts–powerful on their own–are brought together, one has the power to forge an
empire and to hold onto it as well. The Throne, Scepter, and Crown of Empires, if recovered, could reverse the fortunes of the wastes.

Unfortunately, age has not been kind to many of the local relics and artifacts. Some have been repurposed as armor, such as Lightning Greaves or Swiftfoot
Boots. But if you know what you are doing, perhaps you can search the detritus of time and turn this Trash for Treasure. A local Goblin Welder knows more.
And there is a rumored engine of the arcane past hidden under the sands that can also perform this service, the great Kuldotha Forgemaster itself.

Anyway, here are the cold and frozen wastes, led by Balthor and other allies, carving an existence on the edges of the earth where survival is taken by the
edge of a sword.

So there is the deck! Again, I tried to find items both flavorful and useful. Sure, I could add in Sandstone Deadfall, but it sucks. I wanted this deck to
be feasible at the kitchen table. And it is!

These random projects are a great way to stretch those muscles and force yourself to look at Magic cards from a new angle. Decks and cards are more than
just tournaments and winning. If you only look at Magic from that, you’ll get a massive amount from it. Even at the tournament table, winning is enough for
a lot of people. But there’s more out there if you look.

Sometimes you just have to hit random card on Gatherer to find out!

P.S. – I have to be honest. I used some of the tricks I learned in my Pulp Cube here. What’s that? Oh, I built a flavorful Cube around the pulp love of the
era of heroes from the era of Tarzan and Conan. I have it logged in over at cubetutor.com:http://cubetutor.com/viewcube/14274 [Paste this url into your browser. A CT bug prevents getting the correct page when clicking directly. – Editor]