Before I get started this week, I just wanted to thank everyone for all of the positive feedback from my article last week. The e-mails, Facebook messages, and comments were all very kind of you. I’m glad to see that I could have such a positive impact on so many simply through my words.

That’s why I love writing.

As some of you may know, I’m making a run at trying to get back to being a Pro Tour mainstay. This weekend began my quest, and it was a great first step. I played in both of the online PTQs, and while the first one was a resounding failure, the second one was a resounding success!

I ended up getting fourth place playing a Wolf Run Ramp deck designed by John Cuvelier. For those of you who don’t know John, there’s a very good reason why:

John is the true definition of a PTQ end boss. He has lost in the finals of more PTQs than I’ve won.

John is an incredible deck designer and would be better known if he could just win the last round of more tournaments! When I found out that he lost in the finals of another Florida PTQ on Saturday, I inquired about his decklist. He played the following:

As you look at this decklist, nothing here should really surprise you. It’s Wolf Run Ramp, a deck that we have all become intimately familiar with over the past two years. But what makes this version good for the metagame? A few things really:

U/W Delver has the ability to pace a game with a singular threat because of how powerful cards like Insectile Aberration, Geist of Saint Traft, and Runechanter’s Pike are. It’s very natural to want to wait until you can generate at least a two-for-one with these type of effects, but because U/W Delver doesn’t need play more than one threat at a time to win a game, oftentimes it’s correct to take your one-for-one and move on.

When making the choice between Devil’s Play and Red Sun’s Zenith, you have to look at the card that provides the most bang for its buck. Whenever you do manage to draw a Devil’s Play, you’ve always drawn two cards in one. Whenever you draw a Red Sun’s Zenith, you’ve drawn basically the same card as Devil’s Play on the surface, but instead of being guaranteed the opportunity cast it again, you are now only being given the chance of drawing it again.

In this particular kind of deck, you’d rather have the sure thing.

How does that make you feel?

What if I told you there was something you could do about that?

There really isn’t much of an explanation necessary beyond that. Sometimes things just don’t go as planned. Having access to Glimmerpost is a way to mitigate those situations. It saved me multiple times during the PTQ, and there’s no way I would ever play Wolf Run Ramp without them now that I’ve played with them.

Keep in mind that Vorinclex, Voice of Hunger is a matchup specific card. It’s only use is for the Wolf Run Ramp mirror as the ultimate trump. It’s the only card in the mirror that has the ability to truly end games when you’re ahead or catch you up in games that you’re behind in while punishing your opponent for trying to further his/her lead. It single-handedly won me two games in the PTQ where no other card would have.

It’s too bad this PTQ was online instead of in real life, as I wish I could’ve seen the look on my opponent’s face when I played Green Sun’s Zenith for eight instead of six!

What I beat in the PTQ:

What I lost to in the PTQ:

Avacyn Restored is a very difficult set to judge. There are a lot of big flashy things going on:

The trick is to figure out which of these big flashy things are relevant and which are big tricks. The problem, of course, is that all of these cards look so good that that’s an incredibly difficult thing to do. Instead of highlighting individual cards, I’ll just give you my opinion on the above list:

My pick for the best Angel that has been spoiled thus far? 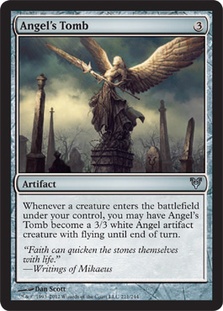 This card will draw comparisons to Glint Hawk Idol, but those should fade quickly. This is the three-drop that a deck like G/R Aggro has been missing. Daybreak Ranger has been a quite the bust (sorry Kibler!), and I could easily see Angel’s Tomb teaming up with Garruk Relentless or any other planeswalker that churns out friends for fun and profit. 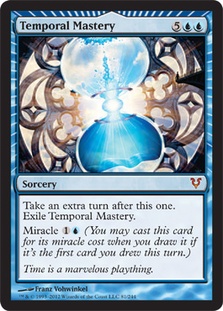 If you don’t think R&D tested the hell out of this card to make sure it was ok to print, you’re kidding yourself. There’s no doubt that Temporal Mastery is a powerful card, but let’s not get ahead of ourselves as there is quite a bit of setup required to make it broken.

I think everyone has come to the conclusion that Temporal Mastery isn’t that great of a card in Standard because it exiles itself (stopping the dream scenario of Noxious Revival + Snapcaster Mage), but a lot of people are worried about the card in Legacy. The most common argument is that RUG Tempo is already the best deck, and now it has access to a Time Walk that isn’t that difficult to set up. How could R&D do this to us!?

Let me shoot that theory down very quickly by looking at the decklist that Adam Prosak got 2nd with at the SCG Legacy Open in Phoenix:

Do you think Adam would want to cut any of the cards from “The Wall” as Gerry Thompson so elegantly put it in his article last week to add in a few difficult to set up extra turns?

I don’t think so.

Is there a deck that I think Temporal Mastery can breathe some life into? Absolutely: 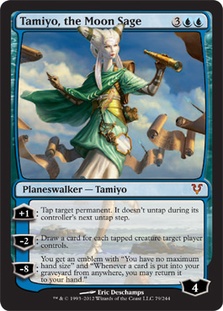 Tamiyo, the Moon Sage — Five mana is a little expensive, but four mana would be too cheap. It defends itself well enough, but is this really better than Jace, Memory Adept? And why is someone from Kamigawa Block walking around with Angels, Demons, Werewolves, Devils, and Vampires? 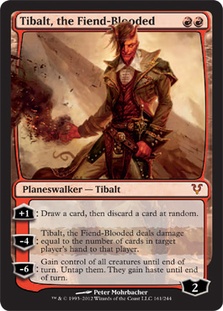 Tibalt, the Fiend-Blooded — A two-mana planeswalker is quite the risk. It looks like they had to make this one less impressive because if R&D’s first shot at a two-mana planeswalker is too good, it really ruins things for the future. I don’t expect Tibalt, the Fiend-Blooded to have much of an impact, but I suppose it could find a home in a Big Red deck as the card-drawing engine.

Banding this is not! 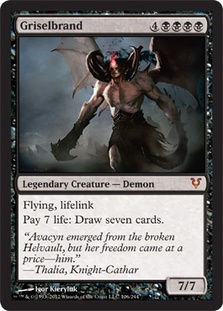 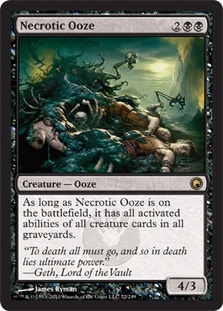 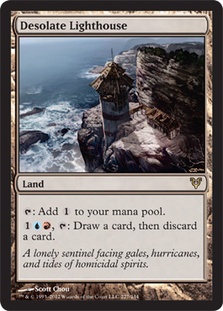 What a great week it’s been! I almost got there in my second PTQ back, I found a deck I really like in the metagame, and the new cards in Avacyn Restored all look fantastic.

It’s a good time to be playing Magic again. See ya next week!