This weekend, the StarCityGames Power 9 Tournament Circuit stops in Rochester, New York, for the second major leg of the 2006 series. SCG Rochester will be a melee of Vintage mania. Information about the tournament can be found here.

The Metagame Breakdown and Analysis

Although there are broader trends in Vintage as a whole, the first place to look when beginning to formulate a view of what the Rochester metagame will be is Rochester itself.

The last Rochester SCG pitstop was in December. Not too much has changed since then. The critical developments are:

1) The birth of Intuition Tendrils.
2) The errata on Time Vault.
3) And to a much lesser extent: The emergence of Meandeck Ichorid (MeanDredge).

The decklists from the last SCG Rochester can be found here.

From those, I’ll conduct a breakdown of the metagame for you, dear reader:

Control Slaver also won both Richmond tournaments. This is clearly the deck to beat. It is the best performing deck in Vintage, as well as the deck that last won the tournament in this area. My advice would be to look at the winning Slaver lists from Richmond to see the Slaver lists you are most likely to face. More on the Slaver list that won Rochester later. 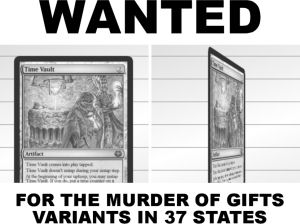 The major American variant of this deck is dead. The erratum on Time Vault has murdered it. The questions is whether the Gifts promoters who ran that combo will revert back to Mana Severance and Goblin Charbelcher, or switch to something else. I think about half the Gifts players will stick with Gifts, and the rest will switch to either Intuition Tendrils or Control Slaver.

I should qualify that there is overlap between the Gifts and Oath decks. There were multiple people playing Meandeck Gifts Oath. Thus, there is some double counting here. None of the Oath decks made Top 8, despite the large amount of Fish in the field. Seems like a horrible choice for Rochester.

It should be noted that I included BirdSh** in that category — which had 2-3 representatives.

The ironic thing is that Fish is probably at its pinnacle at this moment, in terms of how good it is. Since Rochester, Eric Becker (of Intuition Tendrils fame) has innovated an amazing new UB Fish variant (you can read about this decklist and his explanation here.

Also, every so often I organize some Vintage tournaments in my hometown. These tournaments draw the best players from the Ohio region and they are a great indicator of what is going to do well at the next SCG event. All three Fish Type decks made Top 8, and two of them made Top 4, before a prize split ended the tournament.

With Combo and Drains on the rise, Fish has never been better. Its abysmal performance at the previous Rochester should not lead one to ignore one critical fact: take a look at how many people played the bloody thing! And what’s more, Fish is actually good now!

I don’t think we will see more than two Fish decks in the Top 8 at Rochester, but I do expect two to make it. Both UB and UW Fish are really solid choices.

Stax decks are at their lowest ebb in well over a year. This is part of the reason that Fish will perform so well. Another factor: although Stax is at its lowest ebb, people in the Rochester and NE area tend not to play Stax (at least, not the good players — I can think of only two to three exceptions to this general rule).

It should be noted that Colby Evanpence made Top 8 twice in a row with a Stax variant using Jester’s Cap. The top Vintage decks are still quite vulnerable to this threat. However, it doesn’t just kill Slaver and there is too much Fish for this to be really a metagame breaker. I think this deck will not do well in Rochester, despite the fact that it will be a good choice for subsequent tournaments in the Midwest.

None made Top 8. The availability of Grim Tutors has kept at least one player from playing Grim Long. Plus, these decks are notoriously hard to pilot.

I made Top 8 at Richmond, Day 2, with Grim Long — so I think some people may turn to it.

These decks were a mix of R/G Beatz, RDW, Landstill, Affinity, and all sorts of random piles. None of these decks made Top 8. Expect lots of randomness again at Rochester. But if you win your first two rounds, you shouldn’t have to ever see these decks again.

There were no Intuition Tendrils decks at Rochester.

This is important because Intuition Tendrils debuted after this tournament.

I think Intuition Tendrils will probably be in the Top 4 most popular decks in the upcoming Rochester tournament. That type of Combo deck has a great game against Fish, and it appeals to the control players that inhabit the North East.

Again, there was no Ichorid at the last Rochester tournament, because I invented this deck in February. 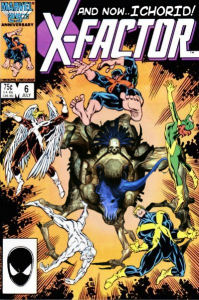 Ichorid will be the big X factor. Ichorid absolutely wrecks Fish. If Ichorid shows up in large quantities, it will shape the flow of the metagame. Ichorid is also a very strong deck that can compete with Slaver and Gifts (check out my matchup analysis articles:

So, now that I’ve done a complete metagame breakdown of the last Rochester, how do I expect the metagame to change?

Here is my ultimate metagame prediction, prepared just for you, dear premium reader:

25 % random decks. As I said, if you win your first two rounds, you shouldn’t have to see these decks again.

15% Control Slaver. Clearly the deck to beat. It has won the last major Vintage events and won the last two Rochester tournaments.

10% Gifts. I expect a drop in the number of Gifts, but it will still be the second most popular Mana Drain decks in Rochester.

About 10% Oath. This is a bad deck to play, since every Fish player has solutions, and it always performs poorly, but it is relatively easy to build and doesn’t require expertise to put together the stupid win.

20-25% Fish. This is coterminous with the previous Fish showing. I, personally, expect 25%+ fish simply because Fish is actually really good right now, as the metagame has shifted to Drains and Combo.

5-10% Intuition Tendrils. This should be the most popular combo deck, by a long shot. Expect good players to be playing it. It is the hot deck of the moment. The question is: can it beat Control Slaver?

<5% Grim Long. This may be the strongest combo deck, but it is the hardest to pilot. Expect very few to do well with this.

? % Ichorid. I expect there to be at least a half dozen or so Ichorid decks. There could be significantly more. Who knows? This deck is the X factor at Rochester.

Play What You Know

So, now that you have a great idea of what you are likely to face, what should you play?

Here is my honest advice: play what you know. I’m going to go over some of the major players and what they will likely play in a moment, but they are in all likelihood going to do well regardless.

The key is to play a deck with which you have the most expertise. You need to have a plan for beating any deck that is at least 5% of the metagame I’ve outlined. If you can’t contend with Fish or Control Slaver, don’t even bother showing up. Tune your deck to find a way to at least compete.

My recent article on Skill should help explain why this is so important.

I’m going to name some of the people I expect to perform well at Rochester. A base familiarity with these names will and their deck choices will be invaluable if you are forced to play them.

Ugo Rivard won the last two SCG Rochesters. I see now reason why he wouldn’t make Top 8, or even win one of the tournaments this weekend. If you see his name, expect his odd list with Mana Leak.

Brian is often hit or miss — but he is a safe bet to make top 8 at these events. His pet deck, Slaver, is the best performing deck in the metagame. If you see his name, expect his Burning Wish variant of Slaver.

Pete has continued to perform well with Gifts. I expect him to carry the Gifts mantle and will probably be running 1-2 Tormod’s Crypts maindeck over Pithing Needle.


Rich Shay is one of the most recognizable names in Vintage. I expect him to come with his standard Slaver list. Take a look at the list he won Richmond, Day 1 with. That’s what he’ll be playing, with some slight sideboard modifications.

Ray is hot off a win at the Myriad tournament with his Staxless Stax list. I expect him to do well. He seems to have found a way to beat Slaver, and his only real weakness may be Ichorid.

Colby got famous with Uba Stax using Jester’s Cap. I fully expect him to play the same deck again, although he has hinted that he may switch to Oath or Grim Long.

I expect this group of guys to play the same deck. Their pet deck, Flame Vault Gifts, has been killed. I think they will revert to the tried and true Severance-Belcher Gifts kill that Probasco took to a second place finish at the Vintage Championships last summer. If not, they will play Intuition Tendrils. These guys are good, but they love their Mana Drains.

I would not be surprised if half of the names I just listed appeared in the Top 8s next weekend in Rochester.

Hopefully, the information above will help you get the jump on your opponents. Good luck at the tournaments!