The Vintage Metagame Report is designed to show you what’s been going on in Vintage tournaments during the past three months. What decks are winning, and which ones are over- or under-performing in the elimination rounds?

If you’re new to the format, this metagame report serves as a useful tool for you to learn about the format; it shows you which decks are popular, which decks are winning, and includes cutting-edge decks and tech from all over the world. If this is the case, and you’re new to these reports and to Vintage, you may want to go ahead and skip down to the header
“The Q4 Vintage Metagame Report”
and check out the data and the decks!

If you’re familiar with these reports from previous StarCityGames.com articles, please read the next section so you can follow the changes I’ve made in how the data is presented.

In either case, the story of the Vintage metagame doesn’t end here; head over to
www.themanadrain.com
or click on the link to the Mana Drain at the top of the page to read more about Vintage, and help shape the format. The Mana Drain is a website dedicated wholly to Vintage, with deck discussions for each major strategy, as well as tournament announcements, tournament reports, and in-depth article discussion. The Mana Drain can help you find a deck you like, tune it, and locate a local tournament, so you can get out there and win some of the Power Nine for yourself.

I’ve spent several months debating over whether I should continue Stephen Menendian work with regards to a Vintage metagame report. Such reports are time-consuming to make and are relatively low on the list of articles that I enjoy writing. Before deciding whether or not to continue with Menendian’s tradition, I had to answer a few questions.

With regard to making a Vintage metagame report, is there sufficient return on the time investment for the Vintage community? Does the work result in a tool that’s useful for Vintage players, and if so, does it help propel and sustain the Vintage format?

I believe the answer to all of these questions is: yes.

However, just because one decides to continue a tradition doesn’t mean that it has to be exactly the same. Thus, given the opportunity to pick up the mantle of this report, I’m going to make a few changes that I believe will increase the value of reviewing the Vintage metagame.

The first, and most significant, change to the report is that I’ve increased the scope to include all tournaments that cut to a Top 8 that have twenty or more players as reported on Morphling. The previous reports included only events with 33 or more players and therefore had six or more rounds of Swiss. The logic in assigning this threshold to tournaments included in the report is that it excludes events where players can go 3-0-2 and therefore can reach the finals and split there, despite only winning five matches.

While there’s sound logic in this decision, I also believe that there’s a lot of value to be gained in reviewing the smaller events and including their data in an overall metagame report. In my report, you’ll see that by changing the cutoff, I was able to include twenty-three tournaments. This decision almost doubles the quantity of Top 8s; the tradeoff for including this data is that while we risk including events where players conspired to get into the elimination rounds without actually playing much Magic, we see a better, clearer picture of the metagame and include those competing in recurring local events, many of which contain some of the best Vintage players (such as those in San Jose or the Meandeck Opens). When almost 50% of the tournaments in a format are excluded, we’re cutting a lot of players, geographic areas, and tournament organizers out of the reporting, which I don’t think is necessary. If we review the data carefully and analyze it, we can eliminate any harmful manipulation inherent in including smaller events while potentially gaining a better understanding of the data.

Why is this important? It lets me get a clearer picture when applying location tags to my data, so that I can construct separate metagame report data on the USA and Europe. One of my chief complaints about the old style of data reporting used was that it drew broad strokes of a “metagame” using global data, but the metagame discussed didn’t really exist as suggested. That is to say, the American and European metagames have had significant differences, some of which are caused by proxy rules used by tournament organizers, others which are just player preference.

By including more events, I can draw conclusions about regional results and look at the metagames globally, but also separately, to look for trends. I can also see if there really is any type of bias introduced into the reporting by including smaller events; is there really a difference when we include five-round events, or are the same decks winning those as well?

You’ll see that I run through the data several times, first including all of it and then refining the location tags, size tags, and analyzing each major deck type in decreasing order of percentage on the report. I’ve also included many example decks in this report, so that you can be clear on what I’m talking about in reference to each deck and can also see examples of what’s actually winning Vintage tournaments during the time period of October 1, 2010 through December 31, 2010, also referred to as Q4.

On to the report itself!

This first table shows you, by general classification, the 184 decks from the 23 tournaments during Q4, with the decks labeled broadly and presented in
descending order of appearance. (For an Excel spreadsheet of all the data,
download here.
)

This table paints things broadly; there are decks that we can, and should, subcategorize. The first nine decks in the table have an asterisk and are further subdivided in the table that follows:

The next table is a full table with all twenty-three tournaments, including the entire Top 8.

That’s a lot of data to review! The decks can be found throughout this article. Let’s dig into this before looking at the data as sorted by some of the tags.

Q4 was dominated by Workshop decks. There’s no other word for it. Look at the data as sorted by the Workshop tag:

Of the tournaments in the report, over 27% of the decks that made the elimination rounds were using Mishra’s Workshop. The vast majority of those were MUD decks, making MUD the most common archetype at 23.4%, almost 50% more than Tezzeret; Workshop prison decks that include other colors are labeled as Stax, which includes Mono-Red Stax and 5C Stax (Five-Color Stax). Two-Card Monte, a Workshop combo deck, also had one Top 8 appearance. I included those with MUD, above, for reference.

We can subdivide MUD into a few major categories; Aggro and Stax are the main two, but versions using Prototype Portal and Kuldotha Forgemaster also popped up in the reporting, as Scars of Mirrodin impacts Mishra Workshop decks.

While most people are using MUD, it appears that Stax has plenty of life left in it, with two of the six Stax decks in the report reaching the finals and winning. Note that many people have moved away from Mono-Red and 5C Stax due to Lodestone Golem, as there’s inherent tension in playing many resistors but still trying to resolve spells.

Let’s take a deeper look at the MUD decks and how they break down:

MUD Aggro is by far the most popular build:

Sam won Blue Bell with a highly aggressive build, utilizing Sword of Fire and Ice, a full set of Steel Hellkites, as well as Metalworkers and a Memory Jar. This is a high-powered, full-octane take on this strategy, one which even includes Wurmcoil Engine and Tabernacle in the sideboard.

Typical Stax decks have a few extra mana sources and replace some of the aggressive cards with Smokestack and Crucible of Worlds; a subdivision of the MUD — Stax set of decks is Espresso Stax. Espresso Stax is the brainchild of Vinnie Forino, with testing and additional development done by Raf Forino and Nick Detwiler, among others. Both of the wins for this deck in Q4 were at the hands of Allen Fulmer, whose build looks like this:

Espresso Stax builds are distinguishable in their use of Serum Powder, which helps with consistency issues, and finds key cards in the Dredge and mirror match.

You can distinguish these builds easily by use of their namesake card.

Finally, another recent Scars innovation is the use of Prototype Portal. I find this one particularly interesting, as the use of Voltaic Key can really turbo-charge this design.

Tezz strategies made the finals at a percentage just barely above their percentage of the field. Under fire throughout 2010, Tezz decks finally
fractured into a number of different, distinguishable archetypes during Q4. Trygon Tezz,
Owen Turtenwald winning Champs 2010 deck,
was the most popular, but several others are present:

The Thoughtcast builds are loaded with extra artifacts and use Thoughtcast as a draw-engine replacement for Thirst for Knowledge. Trygon Tezz is built on Owen’s deck, and Cobra Tezz (or Snake City Vault) is the Tezz deck Meandeck used at the TMD Open on Sept 11, 2010. You can see examples of both
in this article,
but here’s another look at Trygon Tezz.

Trygon Tezz is a powerful option for a Tezz player looking to beat Workshops as they were earlier this year, but it’s light on answers to Gush and doesn’t have an answer to Maze of Ith. The fact that Gush, both control and combo variants, as well as full-on combo decks like TPS (The Perfect Storm) and ANT (Ad Nauseam Tendrils) are present in the format in non-insignificant numbers makes picking the right Tezz deck difficult.

Preordain Tezz is an interesting development, wherein Preordain is utilized to smooth out draws, dig for mana, and keep a steady stream of action cards coming in. This one is particularly anti-Gush, anti-Jace:

Do any of these Tezzeret decks have the tools to push Tezzeret back on top of the metagame in 2011?

Noble Fish spiked briefly in 2010, as the format pushed back against Oath and Tezzeret. How did Fish do during Q4?

Fish was the third-highest representative in Q4 and the last deck to come in above 10%. It didn’t have a very successful time in the Top 8, however, with only 6.5% of the finalists being represented by Fish decks, including none of the winners.

The majority of these decks were Noble Fish, with the breakdown coming in as follows:

One particularly interesting Fish deck caught my eye, using Aether Vial and Chalice of the Void:

Here is another interesting Fish build, which actually uses Gush and Lotus Cobra:

In mid-2009, I posted an unpopular comment on The Mana Drain in which I blasted Fish players for blaming the format (and Time Vault) for their woes, rather than the fact that they’d done nothing to push their deck designs forward. While traditional Noble Fish may be struggling to win, it’s still performing reasonably well, and it appears that some players are taking a cue from Tezzeret decks and are pushing the Fish archetype in new directions, ones that may be able to stay relevant during 2011.

In this section, I’ve grouped together decks which are defined by their use of Gush and are built with it in mind specifically; I have, however, excluded Gro, so that what you find are Gush Control and Gush Combo decks. Gush Control decks are built similarly to Tezzeret in some respects but with more of a combo slant, generally speaking; <a href="https://www.starcitygames.com/search/?card_name=Gush" class="card-popup" target="_blank" data-tooltip='<div style="text-align: center;"> 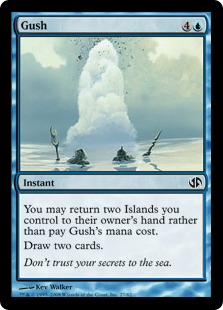