It was very encouraging to read all the great comments last week regarding my G/W Monsters brew and my dip back into Standard waters. Last Friday Night Magic I took another exciting brew on a successful run, and I plan on running it again tonight at a big Friday Night Magic that’s being held at Collector’s Heaven. If they get 32 people to sign up, they’re giving away a Commander’s Arsenal, which is pretty high on the value scale and is also something I never had a chance to pick up for myself back when it first went on sale (even then it wasn’t exactly plentiful). I’d appreciate any crossed fingers and good luck wishes sent my way, especially since it would certainly make a great story to tell next week!

This week though I’d like to pivot back to Commander. I’ve got nothing but love for the legends Wizards of the Coast has printed recently with Commander in mind, but I’ve been feeling a bit nostalgic lately. Sometimes it’s fun to dust off old underpowered legends simply because of the coolness factor and the fact that you never see them played.

So now let’s give some propers to . . . Skeleton Ship! 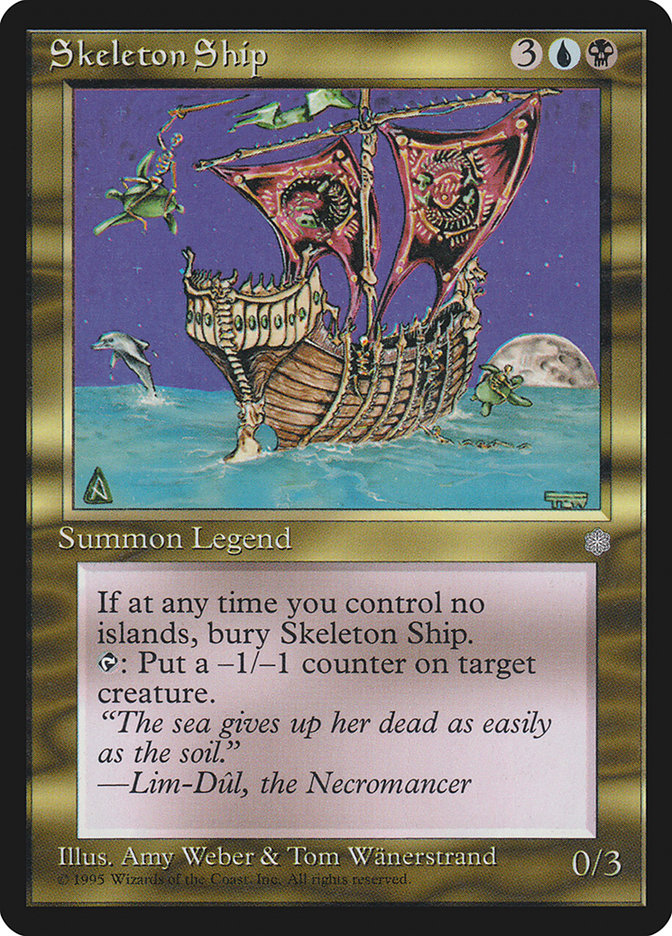 There are some commanders that immediately set off alarm bells around the table as soon as you reveal them. You know the ones—Zur the Enchanter; Rafiq of the Many; and Uril the Miststalker are just a few of them. These are commanders that anyone who’s played the format for any length of time knows they need to keep their eyes peeled for shenanigans from the very first turn. Even if you’re playing a low-powered version of these decks, people will still be on edge and suspicious of you.

It can sometimes be fun and challenging to play a de facto game of Archenemy with the entire table hyper alert to every card you play and move you make. But other times it’s nice to unveil your commander and have the rest of the table just nod and get back to mulling over their own cards. Skeleton Ship is likely going to be that sort of commander. I mean, what can it do? As a 0/3, it isn’t exactly going to be dishing out mad commander damage, and its activated ability of tapping to put a -1/-1 counter on a creature is pretty small potatoes compared to the giant size of many creatures found around a Commander table.

Lucky for Skeleton Ship, Magic has progressed quite a bit since Ice Age. In particular, Shadowmoor, Eventide, and Scars of Mirrodin block have made -1/-1 counters mean a lot more than just shrinking creatures a bit at a time. I want to build a deck that makes unassuming little Skeleton Ship into a burley powerhouse!

As usual, as I’ve been building other Commander decks, I’ve been setting aside cards as I run across ones that look like they’ll go well with Skeleton Ship, and now that I’m ready to build, let’s see what we’ve got. 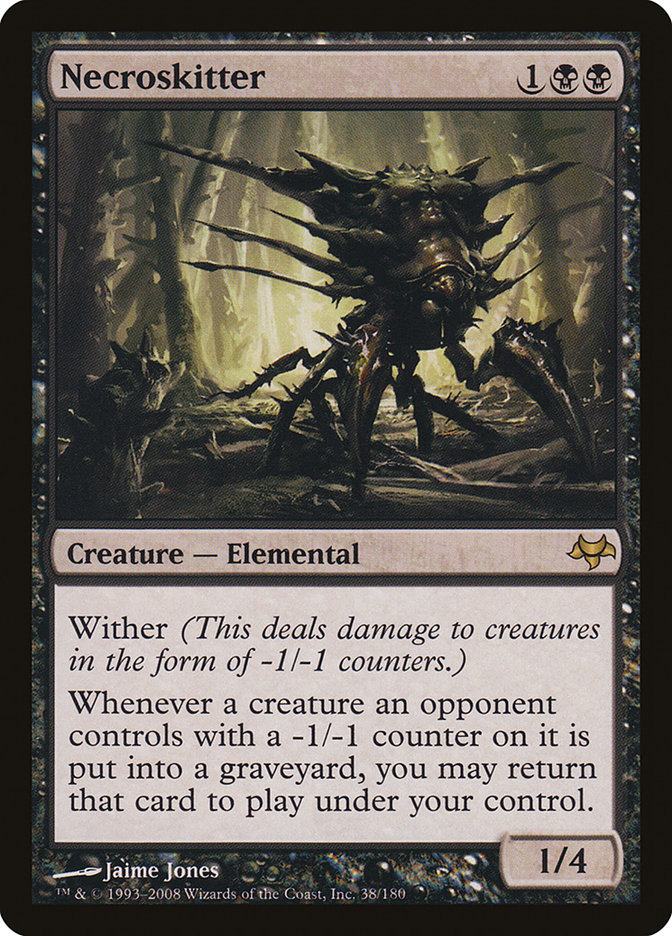 These five cards are the pirate booty that Skeleton Ship wants to find. The all-star is without a doubt Necroskitter, and there are certainly some crazy things you can pull off with it. The dream play is to save all the creatures on the board with Cauldron of Souls when someone tries to destroy them by giving them persist, untap, and then cast Damnation, bringing them all back on your side of the board! Crumbling Ashes is just a workhorse, turning Skeleton Ship into a shotgun to kill whatever appears to be the scariest threat each upkeep. 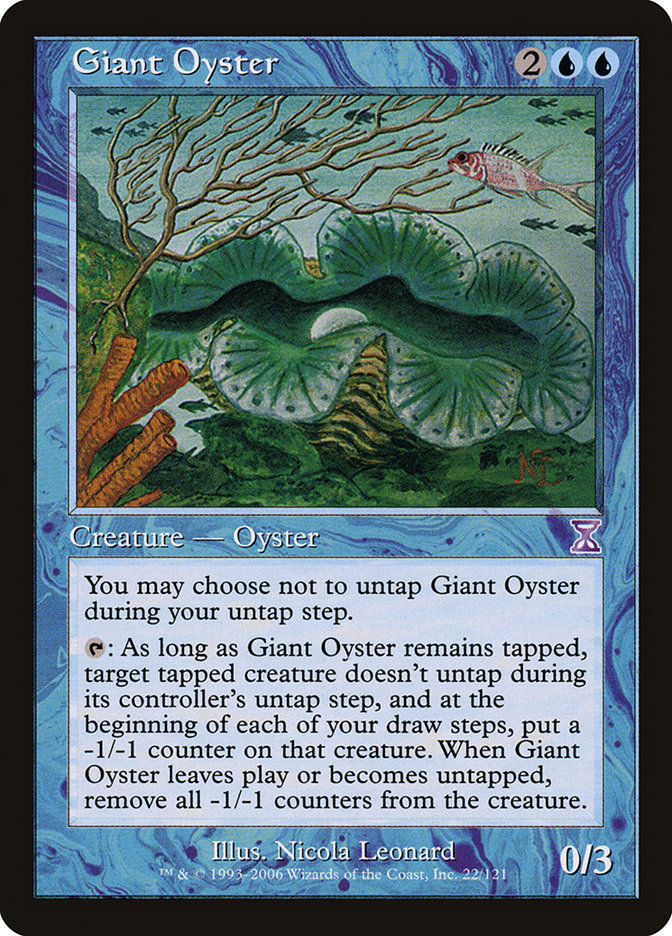 Of course, if you have cards where -1/-1 counters matter, you want to make sure you have more than just Skeleton Ship to dish out those counters. Harbinger of Night, Midnight Banshee and Black Sun’s Zenith hand out those counters en masse, while Fevered Convulsions, Contagion Clasp and Giant Oyster are a little more surgical. Giant Oyster is a little tricky because if it gets killed before its target dies, then all the -1-1 counters go away, but sometimes you can turn that liability around to a benefit and erase -1/-1 counters from your own creatures that have persist. The dream play in this section is to enchant Grim Poppet with Unstable Mutation and Glistening Oil and go to work! 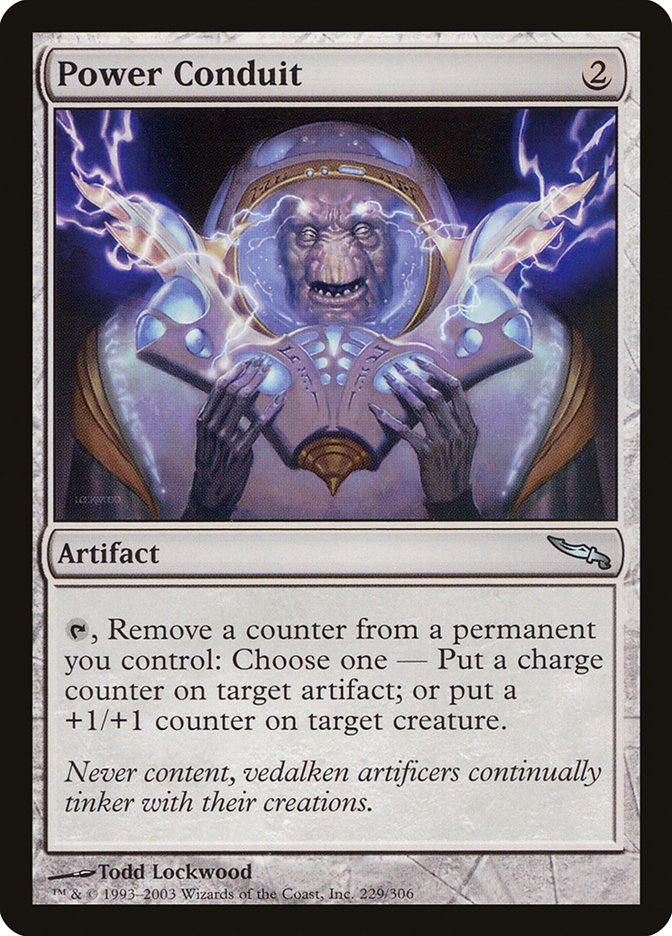 So here’s the deck as it stands:

With the -1/-1 counters and proliferate themes, I’ve got a dose of infect in here to take advantage of poison counters. I don’t see this deck dishing out a ton of actual damage unless you can steal something big, but eeking out poison victories is very real. Speaking of stealing something big and poison counters, I’m looking forward to nabbing an Eldrazi with Corrupted Conscience. Also, enchanting a Creeping Tar Pit with Glistening Oil can put someone in a tough spot.

With the proliferate spells in here, I was tempted to cram in some planeswalkers, but scanning through the list of black and blue ones, I didn’t feel that any of them necessarily fit in with what I was trying to do . . . outside of Jace, the Mind-Sculptor because since when is he bad? However, I don’t own a Jace, so he’s not in here. If you have one, I’d easily cut the Core Prowler for the man in blue.

Did you see the random Death Baron? While this popular casual card is featured in many Zombie tribal decks, let’s not forget that the dude also enhances Skeletons, and our lovely commander is in fact a Skeleton. And the +1/+1 boost actually makes the deathtouch relevant! Sadly, a search of the card database didn’t find any other cards that specifically boost Skeletons, so Skeleton Ship just has one BFF.

I wouldn’t call this deck particularly high powered, but I think it’s got enough game to hang with the big boys on occasion. I didn’t put any tutors in the deck, but I did want some number of cards to manipulate the top of my deck so I can hopefully dig into one of the five cards that help it hum. Druidic Satchel is particularly nice alongside Sensei’s Divining Top; Scroll Rack; Lim-Dul’s Vault; and Thassa, God of the Sea for putting lands into play right off the top of your deck so you don’t have to be bothered drawing them.

These cards are also why I advocate running Panoramas in Commander decks over the "faster" sac lands—there are many times when you want to keep a couple of the cards on top of the deck, but you need all your mana to cast something. If you’ve got a sac land, you can’t use it for mana without shuffling your deck. The Panoramas are "slower" as color fixing, but if they aren’t crucial to fixing your mana, you can keep your sac powder dry and use it for colorless mana. Then when you want to reset the top of your library, you’ve got a card-free way to do it.

So there you have it—a Commander deck headed by a nostalgic general with a boost from more recent sets to pull some nice synergies together. It’s definitely a work in progress, so I’d love to hear any suggestions you might have along with any other thoughts.

As far as my new Standard deck, be sure to check out my Twitter account. I sent out tweets and pics last FNM and plan to do so again tonight.