This is not an article, it’s more of a photo gallery with some words. Ben suggested that I track down some of the better photos of this weekend’s 3-D art display at Worlds and get community opinion about them. There were already two articles about Master Ookubo in the Worlds coverage (Both in its own article and a follow-up piece from the Saturday Blog), but they didn’t include all the new pieces that he worked on over the weekend. A special thanks to Nick Fang and John Liu for use of their photography. I ran the shrinkydinks on all of the pictures here so they would display properly for those of you running crappy monitors, but I’m also linking bigger pictures so you can get the full detail. 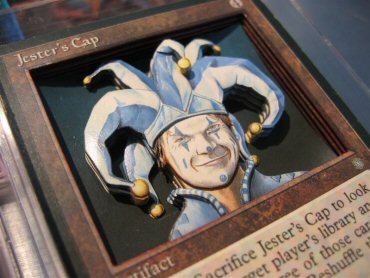 The full image is located here. I got lucky that he accepted my card to do, because I was the last submission to actually get made this weekend, and it took me forever to figure out what I wanted done that was not Time Stop. It turns out he had always wanted to work on Jester’s Cap, and I still really like the art and the card. I’m planning to bring this along with me to the StarCityGames.com Power 9 tournament in October so folks can see it up close. 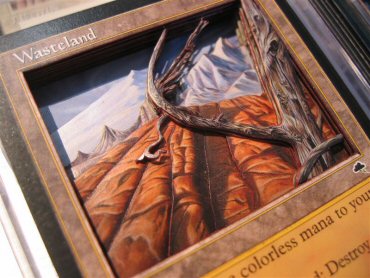 What do you expect? It’s a Wasteland. 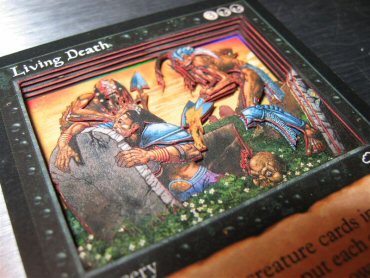 I thought this was a set of foils, but if so, the foiling doesn’t show up very well on this one. The depth of the characters and backgrounds is very cool. 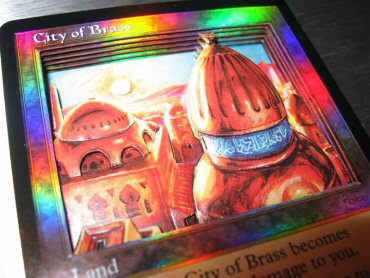 Andy Heckt submitted this, but somehow Tabak wound up with it… I sense foul play somewhere. Perhaps there will be a forthcoming DCI investigation to figure out exactly what happened. Regardless of how Matt got the damned thing, it looks riDONKulous. And for those of you who don’t speak that language, how about transcendently beautiful? 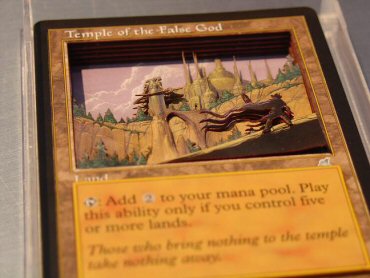 BDM chose Temple, which at first I thought would not be all that awesome. Then I saw it, and my opinion changed. It’s a little hard to tell from the photos, but the Valley has a real depth to it that makes the whole image come to life, and the guy’s cloak casts shadows now. Super cool, and probably my favorite non-Foil card I saw done this weekend. 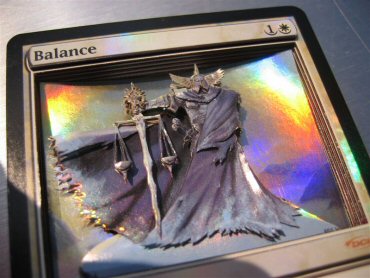 Completely. F***ing. Ridiculous. The cards alone for this thing cost around $500 (he used eight Balances to make it) making the value of it on the market something approaching a Grand Prix win. If you look at the higher resolution picture you can see that the hilt of the sword and the wings on the helm are incredibly detailed. I hear there’s a guy in Texas who has been making 3-D cards forever, but I wonder if he can match this sort of minute work. 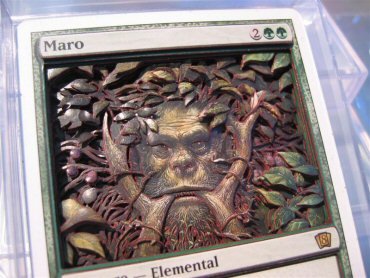 You will never guess how long this took to make. Honest. All the leaf and vine work plus the tusks took over twenty hours to do. Ookubo was actually sad because he felt there was more he could have done with the face, but he was so exhausted by Sunday that he just wanted to finish it and put it all together. Look, I love my Cap, but Maro breaks my mind. When I received the Cap, I gave Ookubo a gift of seven Eternal Dragons in case he wanted to make a set of his own, since he says he doesn’t work on rares very often because they are so expensive. What do you give him in return for this sort of work? Scott Fischer gave him original artwork for Thunderscape Master in return for the full Rune of Protection series, but this goes well beyond that amount of detail. I’m basically at a loss for words here.

I don’t have pictures for the cards in the charity auction, but none of them save the Japanese Lightning Bolt are nearly as impressive as the cards above. Regardless, here are the prices they fetched:

The artist was actually a little dismayed at how much the cards in the auction were going for, so he put up some of his own collection as prizes for Saturday’s Question Mark trivia contest as well, including Mountain Goat, War Elephant, and Fishliver Oil. I don’t know how much any of the pictures above would go for, but I can only assume they would fetch the well above the top end of the auction prices.

Right now though, Ookubo doesn’t sell any of his work, as he fears he could be smacked down by Japanese copyright laws. The staff were talking about what we’d pay for things and we pretty much decided that $100 would probably be the minimum in cash you’d pay for anything resembling cool, and the prices would just go up from there. Since Ookubo brought around 50 cards with him, he could have easily walked away with $5,000 just for the weekend. I’m not sure if he’ll start selling things if Wizards gives him explicit permission or not… if not, you can always show up to Pro Tour: Nagoya in January and try to trade for some. Me, I’m still hoping to get a Time Stop made some day.

Speaking of Time Stop, this is what Baby Flores had to say after reading Daddy’s preview of the amazing new Blue card: 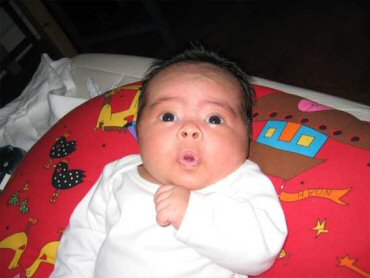 Are you sure about that Bella? What did you really think? 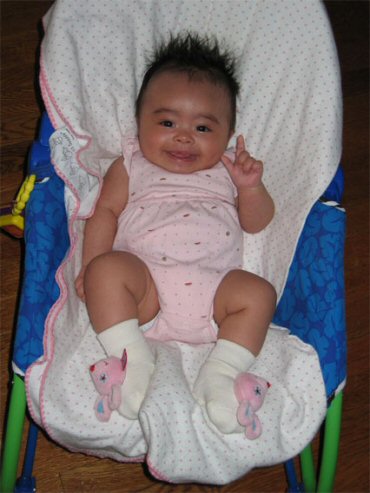 I hope you enjoyed this look at some of the cooler Magic artwork in my memory. I know that for me, seeing Ookubo’s work actually changed the way I think about Magic cards and Magic artwork in general. Please tell us any comments you have about the artwork in the forums, since we are very curious whether Magic players find this to be something truly worthwhile or merely a nice hobby, but not really anything of value.