Last weekend I got the pleasure of traveling to gorgeous Columbus, Ohio with my partners in crime BBD, Stephen H, and Rudy Biscuits for a 50K since some generous watchers from my stream sent me enough points to get in with some byes.

The tournament was Standard and Modern. I wished it were all Legacy.

I didn’t have much experience in Modern, but I figured with enough practice the week before I could find something that I could pilot well enough to get by. But first I want to talk about my Standard deck.

I spent some time jamming games of the Mono-Black Devotion mirror match with a friend who is trying to get better at the game because I wanted to (a) help my friend and (b) see how much skill is a factor in the mirror. I don’t consider myself a master at anything, but I’m pretty good at losing to Thoughtseize on my only removal spell into Pack Rat on turn 2 or double Pack Rat when I only have one removal spell. I also did a pretty good job losing when I didn’t have Underworld Connections and my opponent did.

Any game where there wasn’t a Pack Rat or Underworld Connections blowout I felt like managing resources and tailoring the game to the texture of my hand was quite skill intensive and rewarded tight play, but there were just too many times it felt like I was helpless. I’m sure more seasoned Mono-Black Devotion mages like BBD, Brad, and Todd will disagree, but I just didn’t feel comfortable enough with the deck to play it again.

I had wanted to try a G/R deck similar to Jon Stern’s list from Grand Prix Louisville, so that’s where I started. I really liked how it focused more on the efficient undercosted creatures that are available and how good Domri Rade is against the control decks. Garruk, Caller of Beasts is pretty good, but when you’re devoting spots to Garruk and the mana guys to cast him, Hero’s Downfall and Thoughtseize put quite the number on you. I was also really impressed with how good Xenagos, the Reveler was against Mono-Black Devotion and the control decks.

Here is the Standard deck that I played:

I was really happy with the deck and should have X-0ed the Standard portion on day 1; I punted a game against Mono-Blue Devotion where for some reason I thought that an overloaded Cyclonic Rift also bounced my lands. I was so used to saying "Upheaval you" that I activated monstrous on my Stormbreath Dragon in my combat step to do a couple points of damage to him rather than just recast all my stuff after he bounced it. I even picked up my lands when he cast the spell, and he had to correct me.

Boy was my face red.

The only change that I made to the maindeck from Stern’s list was swapping a Boon Satyr for another land. When I was playing G/R Devotion, I always wanted another land, and that was with Voyaging Satyr in the deck already. Since we have Kalonian Tusker; Boon Satyr; and Polukranos, World Eater, it doesn’t take too much to turn Nykthos, Shrine to Nyx into a mana-generating powerhouse. Over the course of the tournament I wished that I had a second in the deck since the times that I did have it were just unfair.

The problem that G/R Devotion has against Mono-Black Devotion is that it is so all in on Nykthos, Shrine to Nyx into Garruk, Caller of Beasts or Polukranos, World Eater that a Thoughtseize and a Hero’s Downfall breaks up its plan so much that it doesn’t really have much else going on. With more monsters, we can just overwhelm them with efficient creatures and make them play a game off the normal tempo that they are used to.

I was pretty happy with the sideboard and used just about every card at some point during the day. The extra planeswalkers were awesome against the control decks, and Ruric Thar did some Unbowing over people when I got to put him on the battlefield. The card that I was impressed with the most was Plummet. Being able to kill Desecration Demon is huge game, and it can also hit Nightveil Specter and most of the early-game creatures from Mono-Blue Devotion. 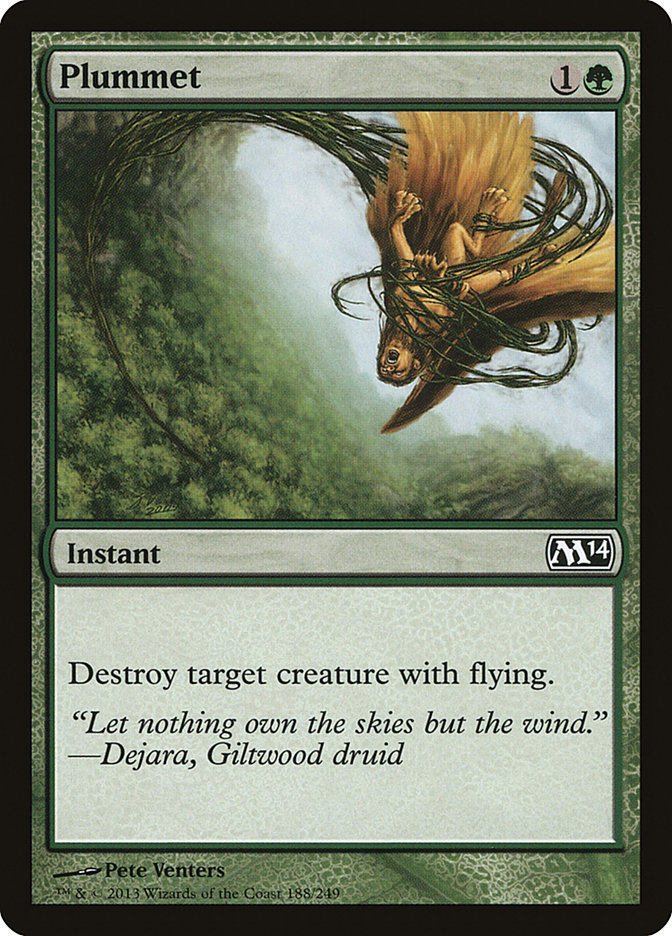 For Modern I had been talking with Glenn Jones about a Merfolk deck and how awesome it would be to curve Kira, Great Glass-Spinner into Master of Waves. It seemed that Raphael Levy had the same idea; he unleashed the deck at Grand Prix Antwerp, and even though he didn’t place in the Top 16, the deck still made plenty of waves on the Internet.

I played a bit with the deck on Magic Online, and it felt pretty awesome. Todd and Brad were also working on a U/B version of the deck, and after they both 4-0ed a Daily Event with it, it was poised to be all over the place.

I felt like the Merfolk deck was going to be pretty popular, and being a step behind and still on the mono-blue version, I decided to just play Affinity. Modulating robots is something that I am familiar with since I have played the deck in most of its configurations since the artifact lands were legal in Standard. After talking with Chris Andersen about the deck a bit, I ended up on a list with Shrapnel Blast over Thoughtcast with the goal of being as aggressive as possible. Here is the Affinity list that I played:

There ended up being like a billion Affinity decks there, so I wished that I had another Ancient Grudge. After playing with Shrapnel Blast over Thoughtcast, I can say that I’d rather have Thoughtcast. Any time that I had Shrapnel Blast there was just never a good time to use it; I always wished I could just draw two cards. Post-board we have a lot of high-impact one- and two-ofs in our deck that drawing into could spell doom for our opponent, and Thoughtcast accelerates us into those cards. 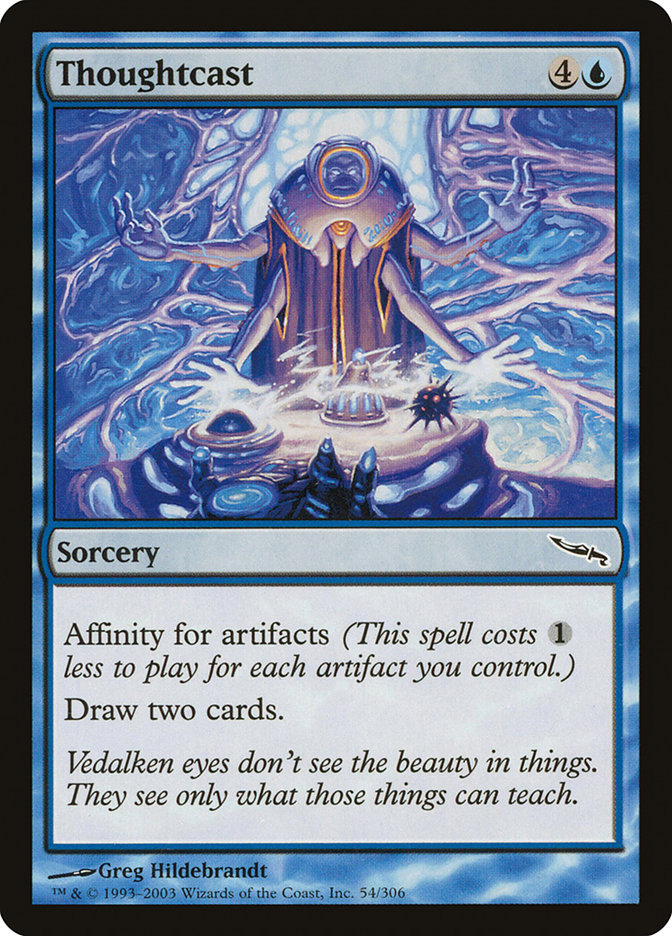 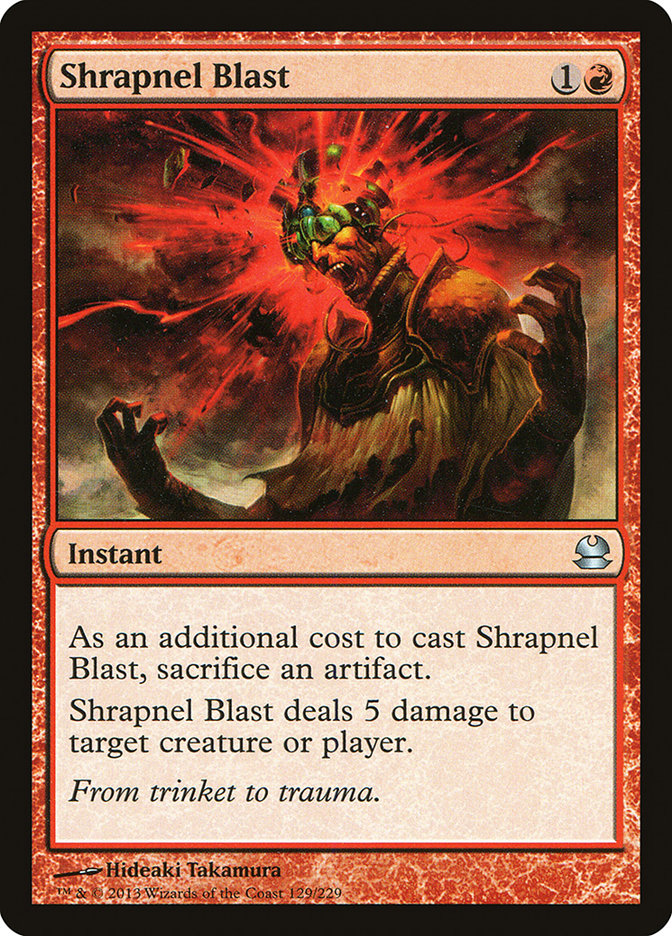 I was able to best Jund and a U/B Merfolk deck in the Modern portion but lost to both friends that I was paired against: Tannon Grace and Anthony Eason on U/B Merfolk and Affinity.

I ended up missing Top 64 by two spots due to breakers and didn’t make it into day 2. I definitely wished that I had made it so that I could play some more Modern, but with no one in our car making day 2, we all felt like getting a good night’s sleep and driving home at a decent time on Sunday was better than playing in any of the side events that were being run.

The next big tournament that I’ll be going to is Grand Prix Washington DC in two weeks. Should we just send the trophy to Huey now and play the rest of the tournament for second through eighth?

We still have one more SCG Legacy Open before DC and Sneak and Show has a target on its head, but that’s not anything new; it’s been the best deck in the format for some time now. I’m interested to see how people try to attack the monster-packed monster and how people who are already on Sneak and Show will adapt to beat it.

One deck that seems to have a great proactive plan at beating Sneak and Show has been having some success, recently winning the Legacy Championship at Eternal Weekend in the hands of StarCityGames.com own Ari Lax.

One of the best ways to combat Sneak and Show is with proactive permanents, and this deck has it all. Combine the disruptive Thalia, Guardian of Thraben and Phyrexian Revoker with the protection of Mother of Runes for Pyroclasm and you have a soft lock of sorts against them.  Fiend Hunter, Mangara of Corondor, and Karakas even give us raw-dog Show and Tell protection from Emrakul tearing our Aeons.

I actually really like Death and Taxes in the current Legacy metagame and expect to see a fair amount of it in DC.

There were two more surprises at the Legacy Champs this past weekend. There wasn’t a single Sneak and Show deck in the Top 8, and there were three copies of True-Name Nemesis in Osyp Lebedowicz U/R Delver deck that lost in the finals to Ari and his worldly certainties. 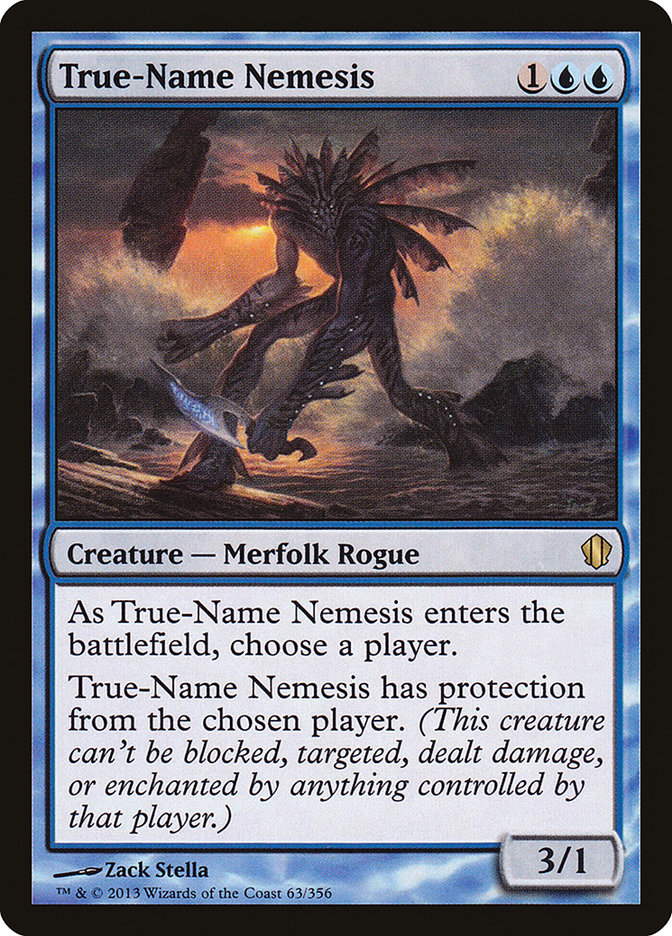 True-Name Nemesis is a very powerful new card from one of the new Commander decks, and in the battle of fair decks this three-mana mini Progenitus is going to be making some waves. Not only does it work well in a disruptive tempo strategy like this deck with Delver of Secrets, Young Pyromancer, and Stifle, but I’m excited to see this bad boy with an Umezawa’s Jitte on it.

The only downside that I see to True-Name Nemesis is that it’s being introduced into Legacy in a time of flying spaghetti monsters and giant black demons that draw a billion cards and just don’t care about a puny 3/1.

If I were playing at the StarCityGames.com Legacy Open in Dallas this weekend, I would definitely be jamming monsters in both formats: G/R in Standard and Sneak and Show again in Legacy. I’m still a bit unsure if I like Huey’s build with Daze; no Gitaxian Probe; and Jace, the Mind Sculptor in the sideboard. I do know, however, that you better have a good plan for the mirror and be prepared for Death and Taxes. Pyroclasm has never looked so good!

I’m going to be spending my free time this week and next working on Legacy for DC, and I’m going to be starting with the U/B Tezzeret deck that I played a while back. I always felt like that deck had a good Sneak and Show matchup and want to see if I am just imagining things or if Ensnaring Bridge with Tinker in the maindeck is good enough, not to mention most of the fair decks can’t really handle the Thopter Foundry / Sword of the Meek combo anyway. I’m hoping to acquire the cards on Magic Online so that I can stream with the deck this week, so keep an eye out if you’re interested in playing planeswalkers on turn 2 or making a billion 1/1 flyers to pummel your opponents!